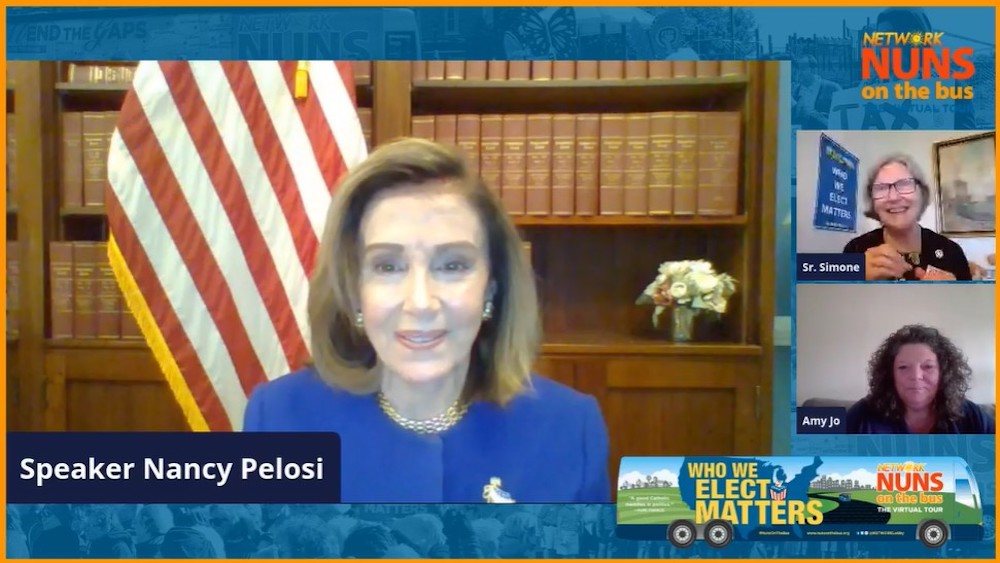 House Speaker Nancy Pelosi, a Democrat from California, addresses the virtual 2020 Nuns on the Bus kickoff Sept. 23. At right are Social Service Sr. Simone Campbell, executive director of Network, and Amy Jo Hutchison, a woman living in economic poverty in West Virginia, both of whom also spoke at the event. (Network screenshot)

Saying they could not stay silent, the Nuns on the Bus began their virtual tour of the country Sept. 23 with a range of speakers talking about the need for a government that serves everyone.

Social Service Sr. Simone Campbell, executive director of Network, began the event by noting it was being held in the shadow of more than 200,000 deaths caused by COVID-19 and the death of U.S. Supreme Court Justice Ruth Bader Ginsburg.

She added that the kickoff also began as President Donald Trump and Attorney General William Barr were honored at the National Catholic Prayer Breakfast.

"Our politicians are once again attempting to wrangle Catholics with the all-too-flawed, narrow and politically opportunistic view of our faith," Campbell said. "We need to be multi-issue voters in our complex reality."

The tour, which runs through Oct. 23, will be entirely in cyberspace because of the risk of transmitting the coronavirus.

Nuns on the Bus began in 2012 as a cross-country bus tour to raise awareness of income inequality and the working poor, barnstorming through political battleground states. This will be the seventh tour.

Because it is virtual, anyone can join: Participants attending the Nuns on the Bus tour start with a monochrome bus on their profiles sand add a color with each stop. It takes 30 stops to complete the tour, which includes online rallies, town halls and site visits. Live events will be recorded and become stops on the tour. There will be 60 live events, and more than 50 sisters will participate.

Pelosi told the online audience that politicians have made keeping and gaining power more important than even the foundations of the country.

"Our very democracy is threatened by those who would undermine the right to vote," Pelosi said. "And so the theme of this tour is very important because it addresses the importance of this election: Who we elect matters."

She was followed by Amy Jo Hutchison, a woman made poor in West Virginia who said anyone living in poverty should understand multi-issue voting because they face so many different ones themselves.

"When you're poor, there really isn't just one or two pressing issues because your life is kind of like a Jenga game, and if one block moves too quickly or from the wrong place, everything around you comes crumbling down," she said. "I've kept my family going during unemployment by cashing in my retirement savings and living off my tax refund, praying to God every minute of every day that I could just catch a break before everything fell down. ... Poverty is trauma, no matter who you are or how it came to be."

She spoke of friends who have to choose between bologna sandwiches and cereal for dinner for a week because it's a Tuesday and payday isn't until Friday, and another who cannot work full-time or she will lose the state health insurance for her hemophiliac son and his medications, which cost $60,000 a month.

"She has no other choice but to live in poverty to keep him alive," Hutchison said. "Poverty is manmade. Poverty does not come from God. It is designed and perpetuated by those who craft hurtful policies and by those who don't know how to fix the problem because they've never had the problem."

Booker said who Americans elect Nov. 3 will say what the nation believes in.

The Rev. Willie Barber II, senior pastor of Prospect African Methodist Episcopal Church in Fortson, Georgia, spoke about the nation's digital divide and how those living in rural and many suburban areas keep falling further behind because of a lack of access to high-speed internet.

Without it, he said, "we are at the mercy of those who control a narrative that may not be true." He noted that remote learning because of the pandemic is often impossible for children without access.

"You must have broadband to have even the most basic access to education," Barber said. "Broadband is not a luxury. It is a necessity in the 21st century." 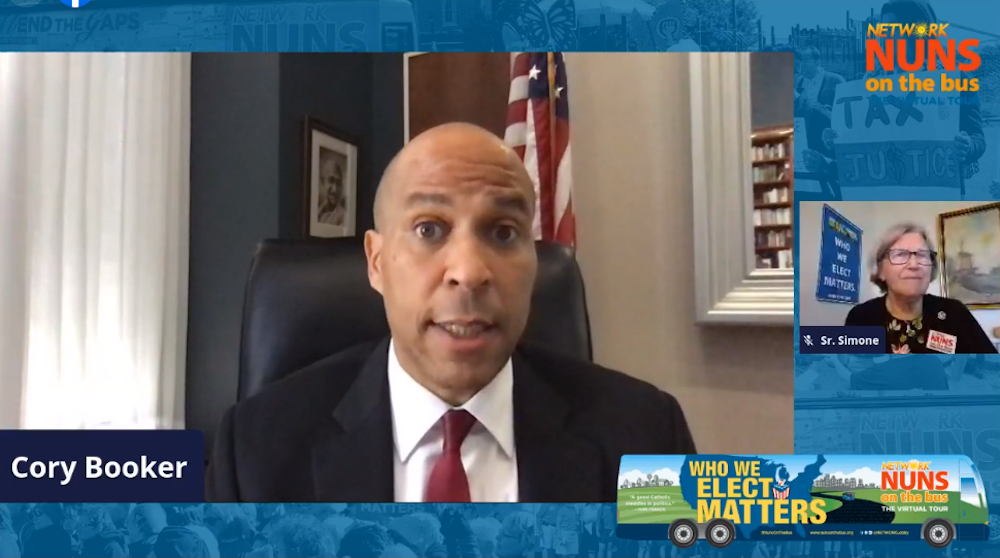 Campbell said politicians have manipulated Catholics, trying to leverage power over the single issue of abortion, but Catholics cannot be single-issue voters if they follow the church's teaching.

"I don't blame a political party for trying to leverage power, but I do blame us Catholics, I blame me, for being silent in the face of this," Campbell said. "I'm speaking out as a Catholic, as a multi-issue voter, knowing that Pope Francis has made it abundantly clear: It is important to care for the unborn. ... But it's access to health care, it's care for the mother, it's making sure a pregnant woman has the capacity to keep a roof over her head and to care for her children. That is how we care for the unborn."

The rally ended with the Rev. Otis Moss III, senior pastor of Trinity United Church of Christ in Chicago, offering a blessing on the trip, praying that we may "have the courage to flip over tables in the civic temple where moneychangers are selling political indulgences to the highest bidder" and encouraging participants to "stir up good trouble and get into holy mischief."

This story appears in the Nuns on the Bus feature series. View the full series.