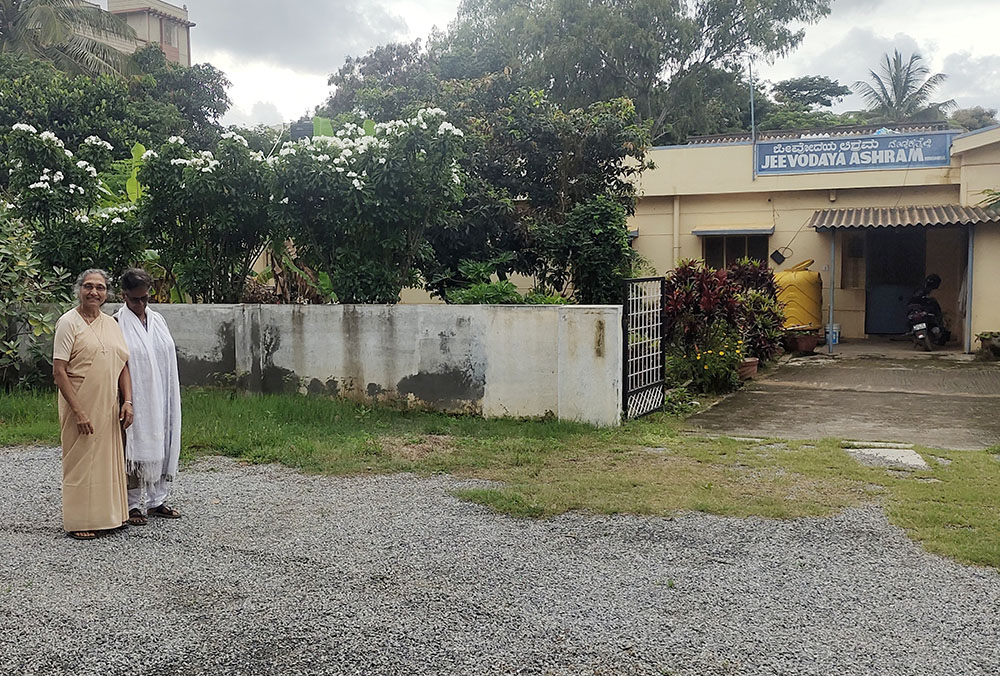 Holy Cross Sr. Fidelis Nedumpara (left) with Sr. Latika Pazhunkaran, a member of the Sisters of John the Baptist, on the campus of Jeevodaya Ashram in the southern Indian city of Bengaluru, where former prisoners and women in distress are sheltered (GSR photo/Thomas Scaria)

No relatives or friends turned up to receive Nanjamma when she was released after 14 years from a southern Indian prison. However, the Hindu woman found a Catholic nun waiting for her at the prison gate, ready to take her to a rehabilitation center.

"If the sister had not come to receive me, I do not know where I would have been today," said Nanjamma, who in April came to Jeevodaya Ashram (Hermitage of the Dawn of New Life), a center for women in distress located in the suburbs of Bengaluru. (Nanjamma requested that her name be changed.)

Holy Cross Sr. Fidelis Nedumpara, who received Nanjamma from the prison, and Sr. Clara Alappat founded the center 27 years ago to shelter and rehabilitate women who are released from prisons, and girls who are rescued from sex rackets.

Jeevodaya has so far managed to return hundreds of women to their families and settle more than 80 girls in marriage (most of them referred from government probation centers), soliciting proposals from suitable grooms through their extensive contacts. "It is a tough job, as society or families do not want to accept them," Nedumpara told Global Sisters Report. 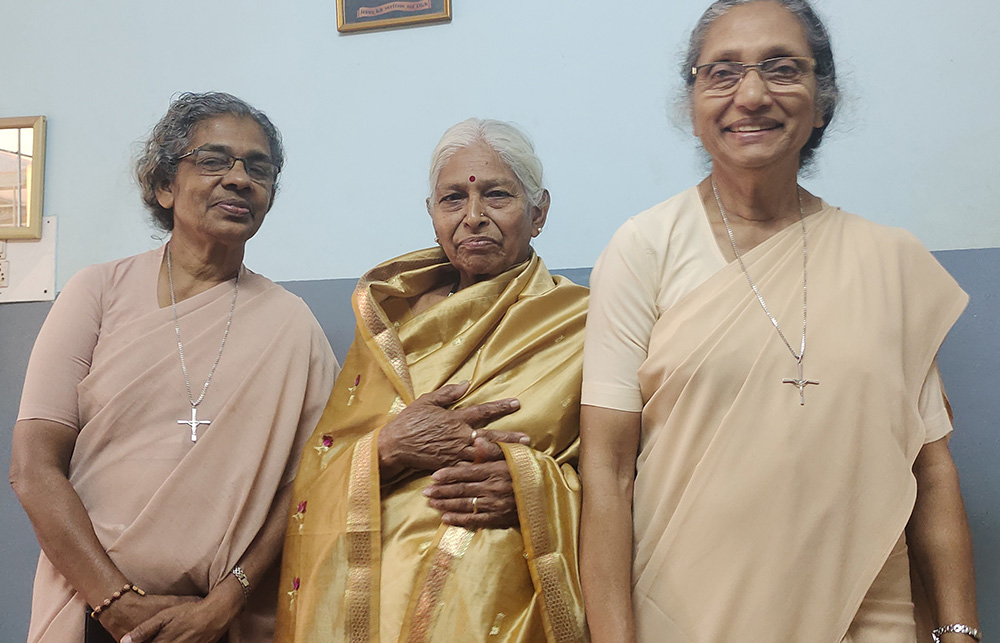 While other Holy Cross nuns take turns to serve the center at different times, Nedumpara and Alappat have stayed with it since inception. "Both of us are aged, but we feel very young when they call us akka [sister]," said Nedumpara, now 75, holding Alappat's hands.

Nanjamma and other residents of the center say they are grateful to the nuns for giving them a new life.

"I am the eldest person here, and others call me Amma [mother]," said Nanjamma, who was in a festive mood Sept. 8 when the center celebrated the birthday of Mother Mary and Onam, the harvest festival of the neighboring state of Kerala.

"This is the first time in 14 years I am in a celebratory mood," said Nanjamma, draped in a silk sari for the celebration.

The woman in her 60s said she has no relatives aside from a son in prison.

Nanjamma and her son were convicted for their connection with her daughter-in-law's suicide 15 years ago, which the police registered as a dowry death case (when the husband or his family members murder or abet the suicide of the woman after her family fails to fulfill their demands for money and goods).

When GSR visited Jeevodaya Sept. 8, Nanjamma was busy with other residents preparing for the feasts. The center celebrates all festivals, as few residents have had happy times in the past, she said. "Every resident of Jeevodaya has sad and shocking stories. Any celebration revitalizes them."

Alappat, who coordinates multiple community-based rehabilitation programs, said even the nuns are in celebration mode: "Our people's happiness is ours, too."

The 67-year-old nun recalled how they opened Jeevodaya on Jan. 22, 1995, in a cowshed attached to a farm house in Hosur, 26 miles southeast of the city of Bengaluru. A Catholic layman had leased it out to the Holy Cross nuns. 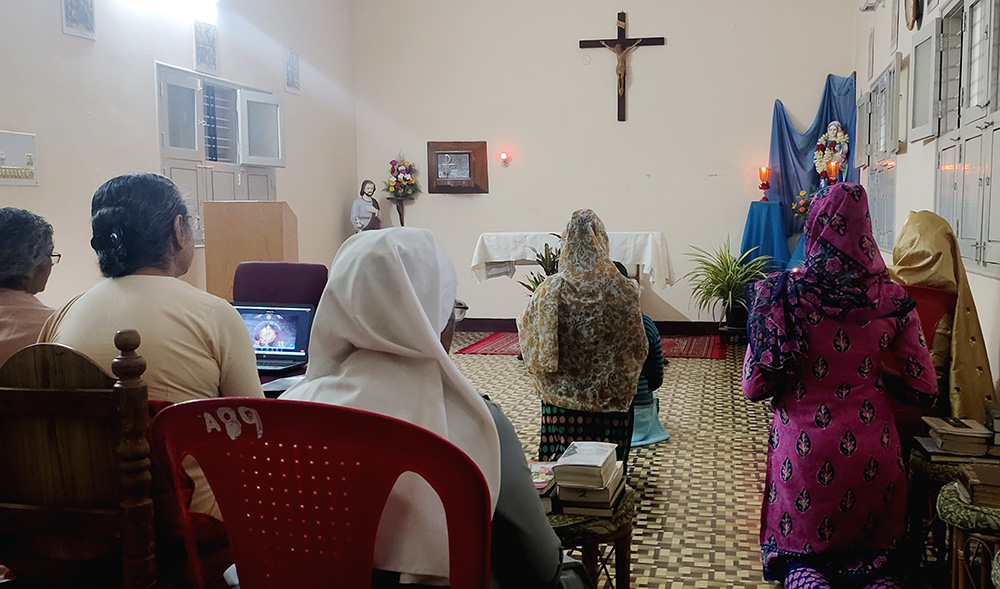 The sisters and residents of Jeevodaya Ashram pray for prisoners and women in distress in the chapel. (GSR photo/Thomas Scaria)

"We started with two girls bailed out from government rescue homes," Alappat told GSR. "Both of them are now well settled in life with their own houses and families."

Some Jeevodaya residents have completed their jail terms or have been bailed out, while others were rescued from brothels or picked up from the streets, said Nedumpara, a counselor with a background in social work.

For most residents, she said, the stigma of their past keeps them from being able to laugh or enjoy their lives.

One of them is 22-year-old Shalini, who came to the center at age 5 after she was found abandoned in a park, Nedumpara said, adding that a government rescue home took her to the center. 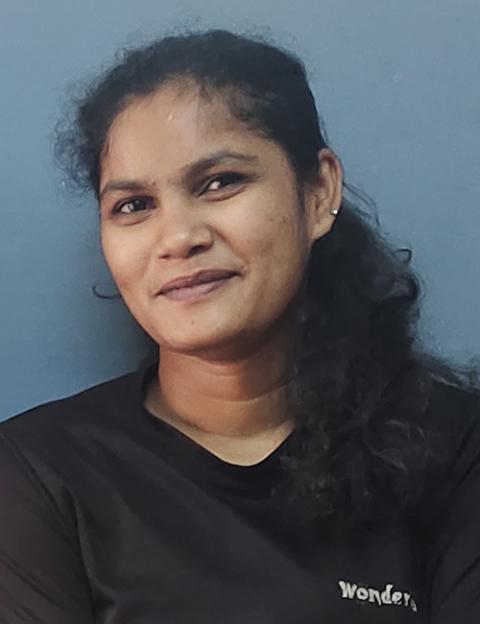 Shalini was brought up by the Holy Cross sisters who manage Jeevodaya Ashram. (GSR photo/Thomas Scaria)

"She grew up with us, attended school and now plays as leader in the ashram [charity home]," Nedumpara said.

Shalini (whose name has been changed) said her life would have been spoiled if the nuns had not "rescued me, loved me and made me their happy daughter."

She now wants to become a nurse, and the nuns said they would fund her training.

Leena Maria, a Christian resident in her early 20s, works in a salon managed by a former Jeevodaya resident.

Nedumpara said she was placed there as part of occupational therapy to help her recover from a trauma in the family. Her brother murdered her father, and "she is yet to recover from her shock," the nun said.

"We had to keep her occupied as part of our counseling and therapy. We sought the help of the beauty parlor to make her work," she added.

The salon owner, Shobha, was a former resident whom the nuns had helped settle in marriage.

Jeevodaya also helped the couple buy a house and launch their business. "Now they help our girls, too," Nedumpara said. 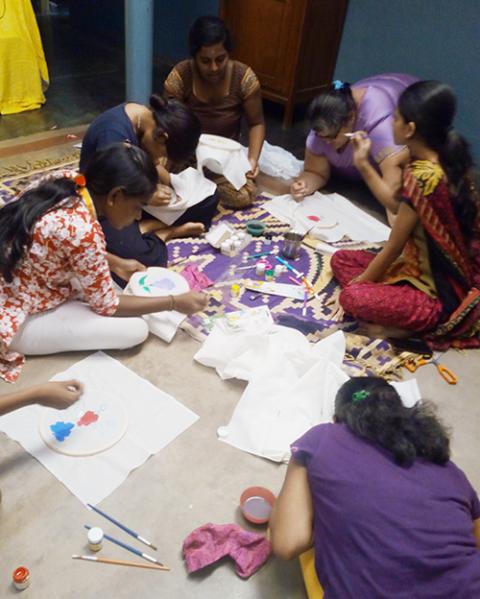 Another woman who the nuns bailed out was Sasikala, who was imprisoned after jumping into a pond with her son as an act of suicide, their desperate escape from her drunken and abusive husband. Neighbors rescued her, but her 7-year-old son died.

"I hated my husband, but loved my son so much, but God took him away and left me here," said the Hindu woman in her 50s, forcing a smile through her tears.

As Alappat consoled her, she said firmly, "I will not die," having battled depression and suicidal thoughts since her son's death and since receiving counseling from the sisters. "I want to help the sisters in their work to help others like me."

Alongside Nedumpara, Alappat said what they are doing is "just a drop in the ocean," as thousands of women languish in prisons and brothels. "Those who have joined us have reached some shores of hope," she added.

The latest study by the International Labor Organization revealed that in 2021, more than 50 million people lived in modern slavery as victims of human trafficking, sexual exploitation or forced marriages. According to the report, children and women, who are disproportionately vulnerable to this phenomenon, are most often used for commercial or sexual forced labor. 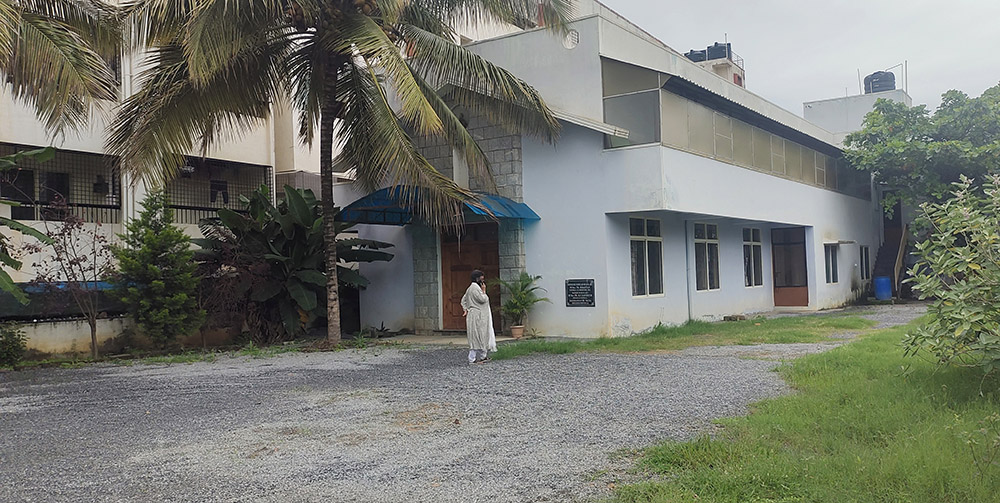 The Prison Ministry of India houses the counseling unit of Jeevodaya at Carmelaram, a suburb of the southern Indian city of Bengaluru. (GSR photo/Thomas Scaria)

Nedumpara said they started the center in 1995 as a response to the issue of modern slavery.

The same year, the inspector general of police of Karnataka state permitted the nuns to visit women prisoners with a caveat: "You can counsel them, but don't convert."

Nedumpara recalled responding, "We have no plans to convert them from their religion to our religion, but surely we will work for their conversion of heart."

Their mission received a boost when then-Archbishop Alphonsus Mathias of Bangalore visited them six months after they turned the cowshed into a dormitory, Nedumpara said. "Looking at our enthusiasm and determination, he offered us to function from Sumanahalli, a rehabilitation center for leprosy patients."

In 1997, the nuns were able to buy a plot of land in Carmelaram — the site of multiple religious congregations — and build Jeevodaya Ashram with donations from various parishes throughout the Bangalore Archdiocese. 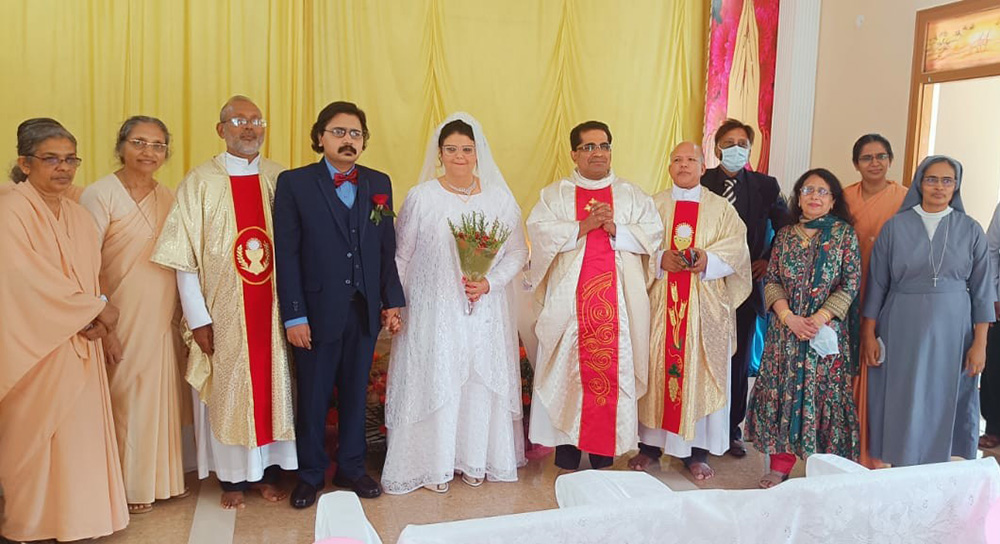 The marriage of a resident of Jeevodaya Ashram, where sisters help women get settled in marriage by soliciting proposals (Courtesy of Fidelis Nedumpara)

The center has sheltered more than 600 women in the past 27 years, Nedumpara said.

Alappat said their aim is not to keep the women permanently in the center, but reintegrate them in society with marriages, jobs or some entrepreneurship. The sister spends her time visiting families, prisons and courts, or accompanying women to their homes.

"I even had to face physical violence sometimes during my outreach visits, especially when I take our women to courts for legal procedures," she said, recalling a time she was beaten by a person while taking his battered wife to the court.

"Such incidences are common in our lives as we work within a criminal world," said Alappat, who once had to be hospitalized with serious wounds after a similar attack. 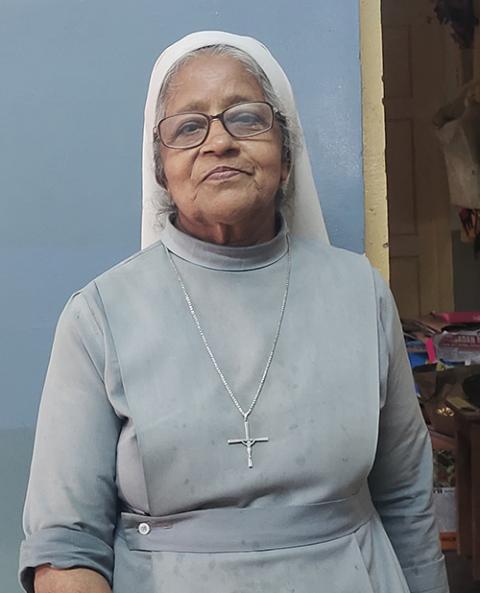 Despite the challenges, sisters like Holy Cross Sr. Teresina Thaikanath say that their life is "more rewarding and fulfilling" when serving Jeevodaya and accepting "the most neglected women in society as my own sisters."

She said all three nuns live with the women residents, most of them Hindus, as one family.

Claretian Fr. Alexander Kureekatil, manager of a home for male prisoners in Kerala, initially guided Jeevodaya while Nedumpara and Alappat had no previous experience in working with prisoners. He told GSR that he commended the foundresses for passionately dedicating their life for the cause.

"Jeevodaya will continue to be a new dawn of life for many more unfortunate women in society."