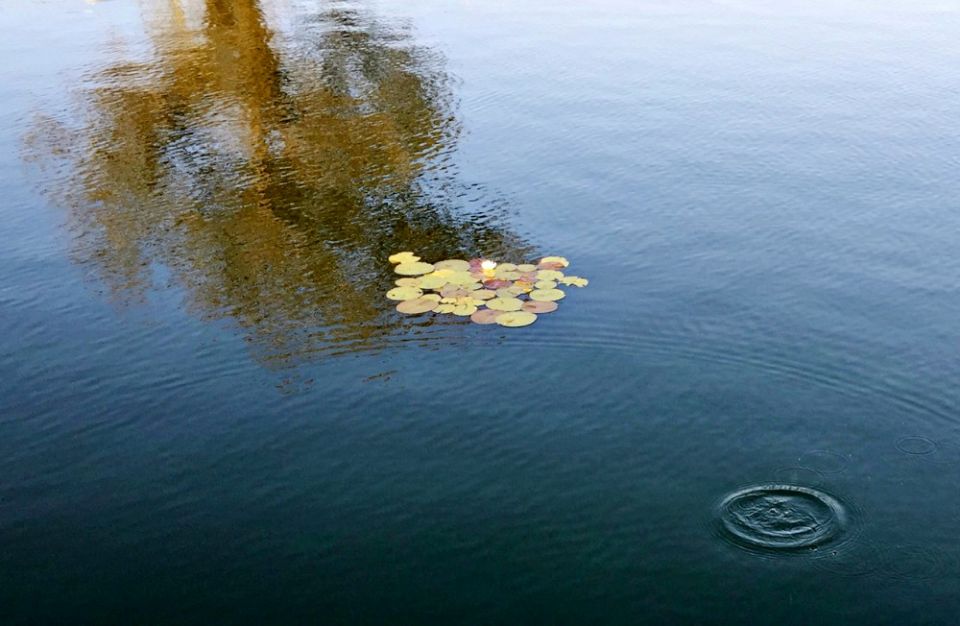 It's no small thing to stick your nose up out of the water; the risk itself inspires reverence. (Mary Bilderback)

Every morning as I pass a spring-fed lake on my way to the ocean, I've learned to look for turtle noses. They break the surface of the lake at a particular angle. They are dark and pointy and usually shiny, unlike dead leaves or other sorts of debris that often complicate the search. And if the sun is out casting shadows, what you look for is a little jewel box with a sparkly lid — floating on the lake's glassy mirror of the sky — open to the west.

The best way to tell if what you think might be a turtle nose is in fact a turtle nose: if it disappears quickly right after you spy it — a clean retraction — with only the subtlest afterglow of concentric rings betraying a being below the resealed surface. That's if you can wait long enough for all this to happen in an instant. It's no small thing to stick your nose up out of the water; the risk itself inspires reverence.

What draws me to the spotting of turtle noses rupturing the silent satin surface of a lake? I can't be sure, but I suspect it is the same disorderly curiosity that drove me to microscopes and telescopes, to meditation and a contemplative life.

There is a thrill in wanting, and waiting for the invisible to appear. Astrophysicists alert at telescopes on cool Chilean mountains, particle physicists at the Large Hadron Collider outside Geneva, whale watchers up and down the coasts, folks on the trail of the ivory-billed woodpecker, theologians on the edge of their canonical seats may be all of a sort. Mystery sometimes beckons from beyond the range of normal wonder, and can tip a life toward passion, if not obsession, for what is just out of sight.

Lewis Carroll gives an account of the questing life in his poem "The Hunting of the Snark." The refrain goes:

This 141-stanza poem is about seeking — not turtle noses but (close!) Snarks. Wholeheartedly seeking something, something elusive of purchase or capture, and finding its actual opposite maybe — as in the case of Carroll's Baker who was snarked by a Boojum — then vanishing posthaste into the abyss without any trace of you or it. Now there's a hero's journey!

Carroll was fond of writing non-sense: the flip side, I presume, of doing his mathematics and preaching. We owe him for many wonderful worlds, and portmanteau words, and pedagogically useful characters: the "frumious Bandersnatch," the "Jubjub bird." Plus an arsenal of precision weapons: "vorpal swords" for vanquishing "manxome" foes, and all sorts of tools appropriate to mythic investigations. He poked his pen into a vat of invisible ink and led us reverently into very peculiar territory to charm and wreck our reasonable lives.

I've never seen a Snark or a Boojum, nor a turtle full-bodied on the banks here, but this summer as I was leaving a camp in upstate New York, a snapping turtle the size of a small goat galumphed across the driveway — between parked, packed cars — toward Pyramid Lake.

Those of us about to get into cars to drive home stood stock still, and watched as she hauled her Paleozoic immensity back into the murky silence of her liquid lair — ah, those very refreshing waters she had permitted us to swim in — with her. O! With her. And surely others belonging to her underworld tribe — our distant reptilian kin.

It is dark and silent down there (if we dare to look and listen) in the biological underworld from whence we came with mud on our faces and algal hair slung emerald-silken and slimy around our necks, poking our innocent noses up into an air we didn't know we could breathe, into a light that had been waiting for us, starlight beckoning stardust up: "Up, friend, come higher."

That age-old, re-sounding injunction to which we are still responding with varying degrees of intention and grace.

When I was a kid, I had no use for sleep. So it was dark? Even better. It was all still out there — the marsh, the world, the ocean in front of our house on the tip of an East Coast barrier island. One night at midnight, I hiked over the dunes and down to a rock jetty that stretched from the beach out into the ocean. It looked as if the sky had fallen and the stars were set loose to swim. The sand lit up when the waves broke — the waves crashed crushed light.

I didn't have a name for it then, or any idea it was a biological phenomenon with language capable of understanding what was going on. No gorgeous word like "bioluminescence" to pin it down. It was just Earth, permitting pure mystery to break through at midnight. I went door to door waking everyone in the neighborhood to come and see. They came and were bedazzled.

Since then, I've been suspicious that everywhere, lying just beneath the surface of what can easily be reported and sensibly explained, some curious presence is reaching out to us — barefoot — as we reach out to it, and that this shy majesty cares for us and is willing to blow its cover for our sake.

In fact, at any moment, familiar form may yield to conflagration as did the bush that dazzled Moses. Microscopic dinoflagellates are out there now flashing in some shallow ink-black surf.

And look, a quick spark of light lands right there in front of me (and you, if you follow the point of my pen) on the tip of a turtle's nose, just as our eyes do.

In fact, the whole world, just as it is, is out there pursuing, threatening, charming our lives with persistent occasions of luminosity: Logos — never uttered the same way twice.

Still, you might be wrinkling up your face and asking, "Turtle noses? Really?"

"... everything," the poet A.R. Ammons answers, "is magnificent with existence, is in surfeit of glory ..." The very same glory that catches our eye as we seek for it.

Fracking should be an issue for everyone, Mercy sister says in fracking webinar