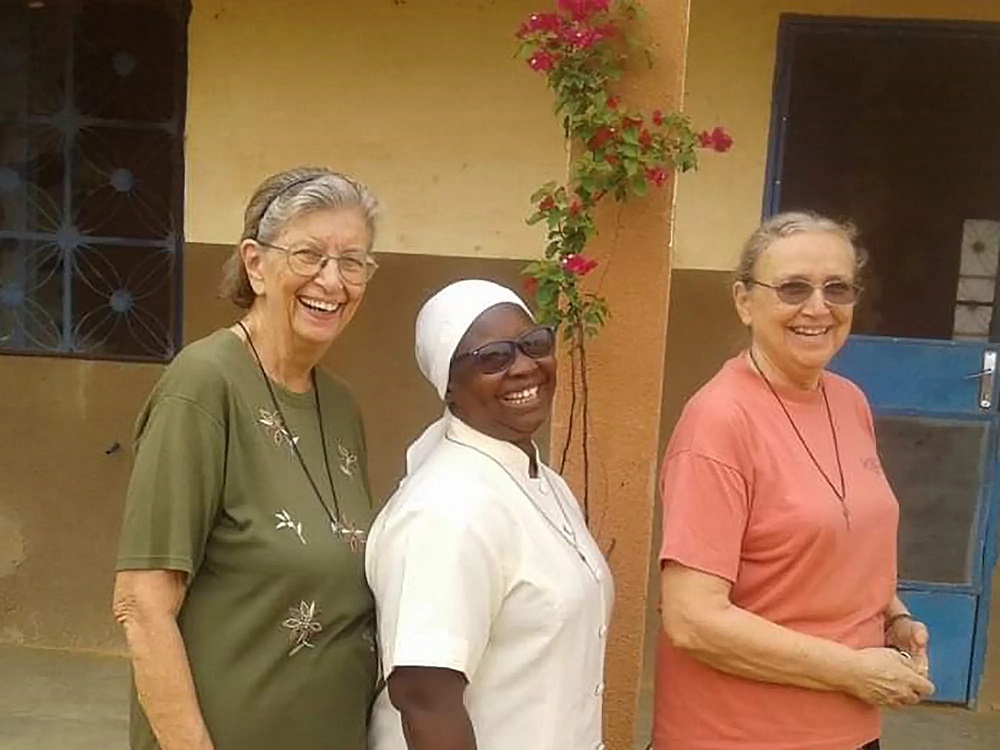 Three Marianite sisters (from left), Suellen Tennyson, Pascaline Tougma and Pauline Dourin, are pictured in an undated photo near the clinic where they serve in Yago, Burkina Faso. (CNS/Courtesy of the Marianites of the Holy Cross)

Marianite Sr. Suellen Tennyson, who was kidnapped from the convent of her educational and medical mission in Yalgo, Burkina Faso, in early April, has been found alive and is safe after nearly five months of captivity, a congregational leader of the Marianites said Aug. 30.

"She is safe," Marianite Sr. Ann Lacour said. "She is on American soil, but not in America. She is safe." She said Tennyson was recovered Aug. 29, and the sisters in the congregation have spoken to her.

"She eventually will get back to the United States," Lacour added.

Lacour told the Clarion Herald, archdiocesan newspaper of New Orleans, that she spoke with Tennyson by telephone.

At least 10 armed men were involved in the attack in which Tennyson, 83, was abducted, the Marianites of Holy Cross said in an electronic newsletter at the time of the abduction.

Since then, there had been no news of her whereabouts or condition.

Lacour said when she spoke with Tennyson, the missionary did not actually "know where she was."

"She's totally worn out," Lacour said. "I told her how much people love her, and she doesn't have anything to worry about. I told her, 'You are alive and safe. That's all that matters.'"

New Orleans Archbishop Gregory Aymond said he received a text from Lacour and was overjoyed that Tennyson had been freed. When Tennyson was abducted — barefoot and in the middle of the night — she had left behind her blood pressure medication and her glasses. 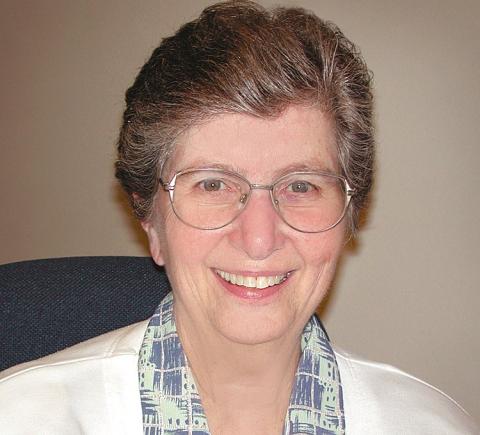 The congregation said Tennyson, the former international congregational leader for the Marianites of Holy Cross and native of New Orleans, was sleeping when the men burst into the convent, ransacked the living quarters and kidnapped her, leaving behind two other Marianite sisters and two young women who also lived in the convent.

"There were about 10 men who came during the night while the sisters were sleeping," Lacour said in an e-bulletin April 6. "They destroyed almost everything in the house, shot holes in the new truck and tried to burn it. The house itself is OK, but its contents are ruined."

Lacour said she was told by the two younger women living at the convent that Tennyson was taken from her bed with "no glasses, shoes, phone, medicine, etc."

The other two Marianites at the convent in Yalgo — Sr. Pauline Drouin, a Canadian, and Sr. Pascaline Tougma, a Burkinabé — were not abducted and did not see many of the details.

"They say the two young women who live with them saw what happened and told them [the details]," Lacour said. "They think there were more men on the road. They have heard nothing from or about Suellen since she was taken."

Lacour said Drouin and Tougma were quickly relocated to Kaya, Burkina Faso, about 70 miles from Yalgo.

She also said the Marianites contacted both the U.S. Embassy in Burkina Faso and the U.S. State Department and received assurance that this was "a high priority case for them."

The congregation also contacted the apostolic nuncios to the U.S., Burkina Faso and France as well as the Vatican's secretary of state and the Leadership Conference of Women Religious in the United States.

Yalgo is in northern Burkina Faso, not far from the border with Mali. Reliefweb, a humanitarian information source on global situations, reported in April that in the past two years, Burkina Faso's northern and eastern regions had seen a "sharp deterioration in the security situation ... due to the presence of nonstate armed groups."

Lacour, who has visited the Marianites in the country, said Tennyson was serving as a pastoral minister, "to wipe tears, give hugs, import a smile. She really did support the people that work in the clinic that the parish runs," adding that people walked for miles to get help from the clinic.

Bishop Theophile Nare of the Kaya Diocese said Tennyson was abducted overnight between April 4 and 5 and taken to an unknown destination.

The bishop said the kidnappers vandalized the convent where Tennyson lived in community with other religious women before taking her to the unknown destination.

According to media reports, Burkina Faso, one of the 10 countries in the Sahel region of Africa, has been facing rampant violence occasioned by political crises, which gives a fertile ground for the proliferation of extremist groups.

The city of Yalgo borders the province of Soum, where armed groups are particularly active. In this area, attacks against civilians have increased according to reports.

Ruby Faucheux Keefe, a childhood friend of Tennyson's said she was thrilled to hear Tennyson was safe in U.S. custody. "I've been thinking about her every day. This has made my day. We grew up together."

Keefe remembered how the two loved to dance and talk on the phone or in person. The last time Tennyson was in town, Keefe recalled how much her friend expressed her love for being in Africa.

"She told me she didn't have hot water," Keefe said. "I thought I don't know how she did it at our age, but she loved it."

"I just feel so great to hear that she's been found," she added.