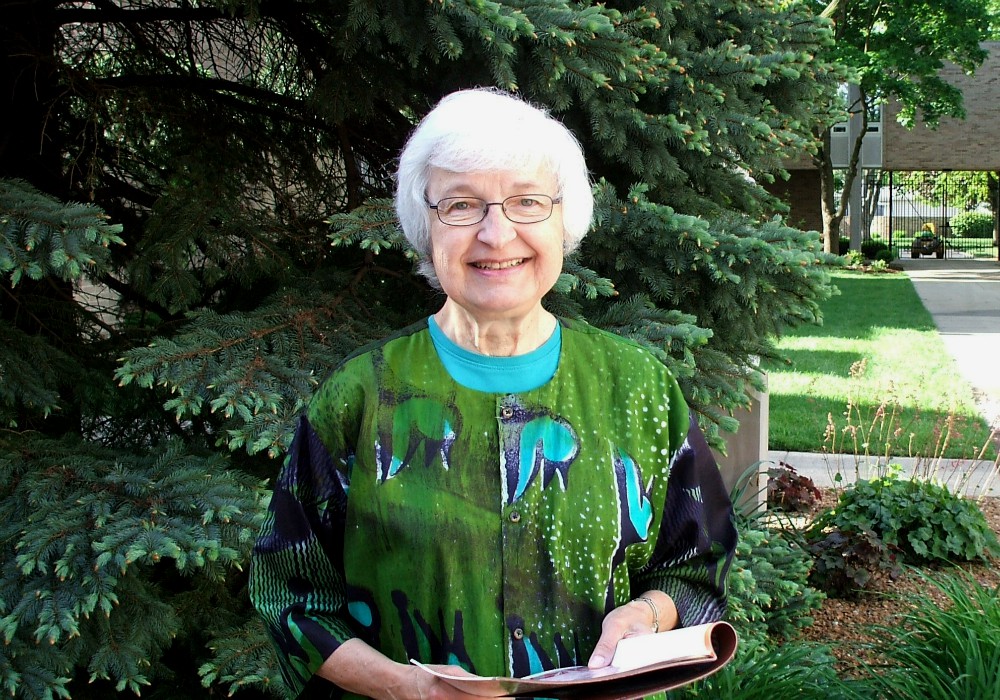 Sr. Rose Mary Meyer is the director of Project IRENE (Illinois Religious Engaging in Nonviolent Endeavors), a sister-run organization that advocates for vulnerable populations in Illinois. Project IRENE lobbies in Springfield, the state capital, to protect people living in poverty, those in prison, immigrants, women and children. The organization was founded in 1996 by Region 8 of the Leadership Conference of Women Religious.

Meyer, a Sister of Charity of the Blessed Virgin Mary, has been the director since 2002. As part of her job, she meets with legislators and presents them with reasons why they should support bills that abolish the death penalty, increase safety and pay for domestic workers, and raise the minimum wage, for example. She works with other advocacy organizations and the Project IRENE liaisons, members of LCWR congregations who share information on legislative goings-on with their congregations.

GSR: What led you to work for Project IRENE?

Meyer: I had always been interested in legislation and government. I remember as a child, I never heard the words "Democrat" or "Republican," but my parents talked about upcoming elections. They discussed the individuals and their qualifications and how would they be in a particular position. I was always impressed that they were taking interest in the legislators who would impact their lives.

When I lived in Chicago, I was a contact person for Network Lobby for Catholic Social Justice, a group in Washington, D.C., that was founded by sisters and deals with national legislation. When a certain bill was coming up in D.C., they would send me word and say, "Call your representative or senator about this bill." I set up a phone tree and had all these Catholics in my district call their elected officials. I had kind of a taste for this work and felt it was a way we could really influence systems' change.

At the time that the opening came for Project IRENE, I was the director of the Peace Museum in Chicago. There had been an opening for the director of Project IRENE for a while. Finally, somebody in my community suggested it to me, so I sent a résumé and had an interview.

What do you learn from the other people working in the state capitol?

I admire the legislators' concern for their constituents and their appreciation for the work of other people in Springfield like me. A lot of people call us lobbyists, but we say we're advocating to change systems, so we call ourselves advocates.

The advocates I work with represent a whole variety of organizations: the Shriver Center for Poverty Law, Protestants for the Common Good, Chicago Coalition for the Homeless. Children's advocacy organizations, education organizations, homelessness organizations: You name it, we have it. I learn a lot from the other advocates' dedication, their energy, their openness to a variety of opinions and cultures and ages, and their deep concern for others. 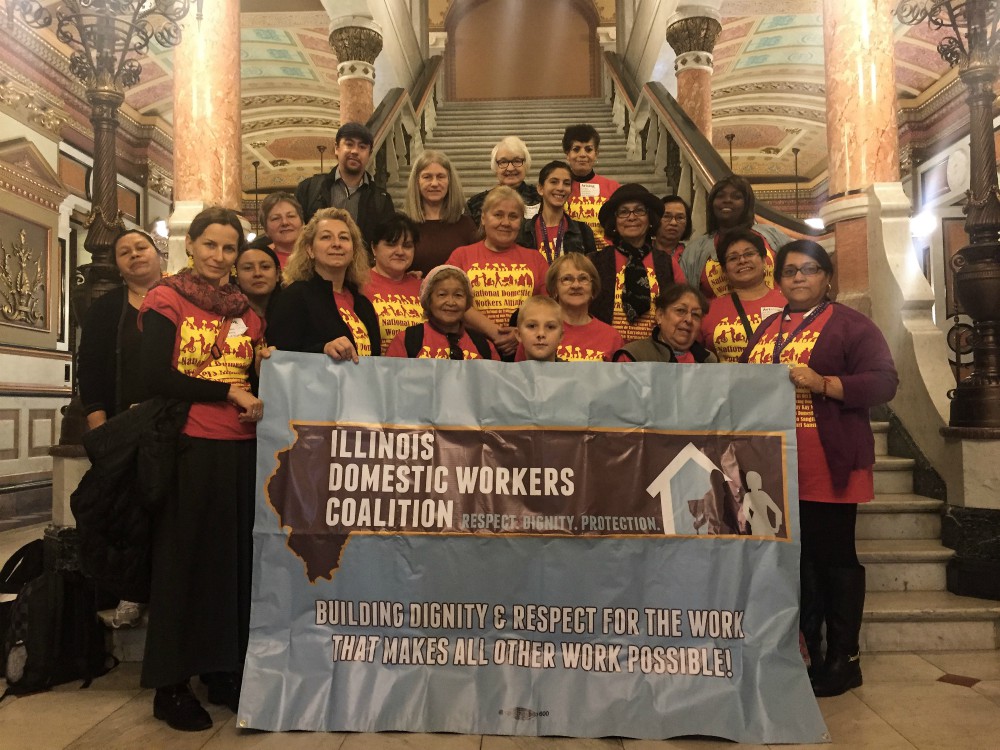 Legislators have a hard job when not everybody thinks the same way in their district. If there's an immigration bill up and the legislator believes we should have this bill for our immigrant sisters and brothers, there could be people in his district that may not think that way. Then he has to take a side, either for or against that bill. I've learned that the legislators have agonizing decisions to make on behalf of their constituents.

What is a recent bill you have helped to pass in the Illinois Legislature?

A few years ago, we worked to pass a bill that said we couldn't have private, for-profit prisons for people who had committed criminal offenses.

At that point, we had never thought about the fact that we might be having private, for-profit prisons for non-criminal offenses, like all the immigrants that are waiting in prison now. We didn't find out about until April that in a few months, they were going to open a private, for-profit prison for immigrants in Dwight, Illinois. We were saying, "Oh, no, we're not going to have that." 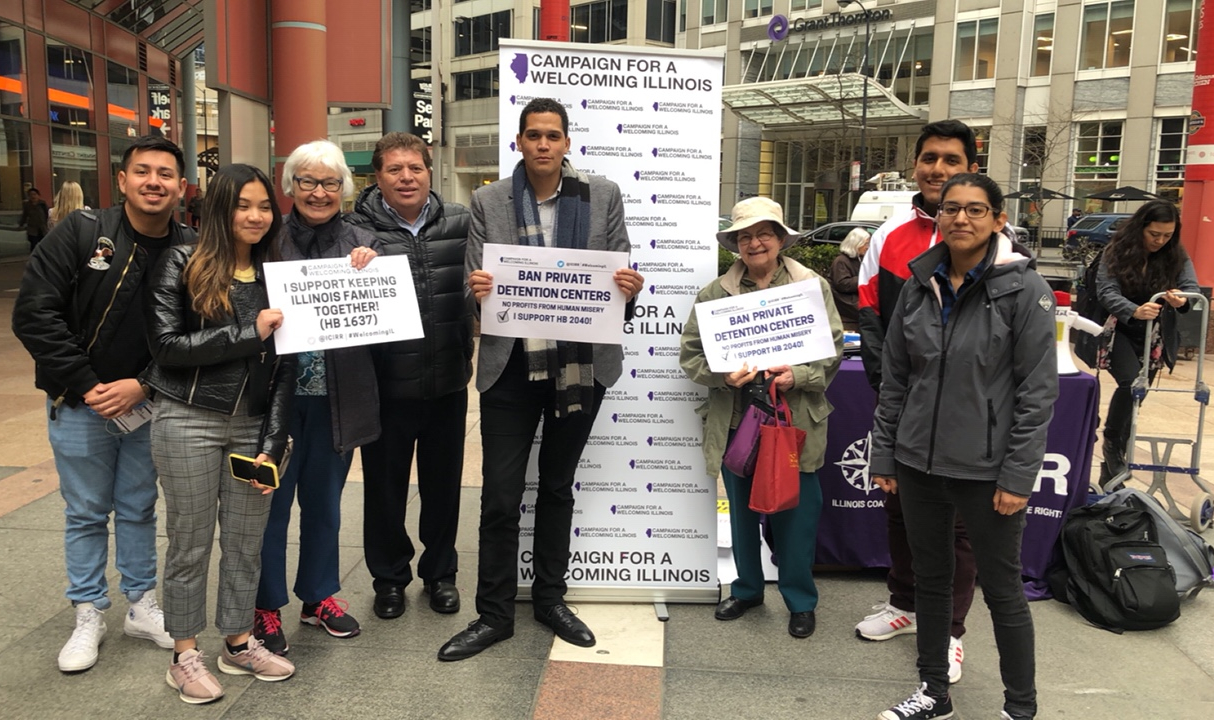 Sr. Rose Mary Meyer, third from left, advocates for banning private detention centers with other partners from the Campaign for a Welcoming Illinois, a project of the Illinois Coalition for Immigrant and Refugee Rights. (Courtesy of Sr. Rose Mary Meyer)

We had to work, starting that time when our session ends at the end of May, so the bill was introduced, and we worked on it and it was passed. It has been signed into law by our governor.

How do you see your work for the rights of people living in poverty, immigrants, women and children as connected to your calling as a Catholic sister?

I see all of those issues, and the others that I'm working on, as a way of living not only the Gospel values, but also the Catholic social teaching based on Gospel values. I see it really as living out the reality of our Christian faith. The inequities we have in this country seem to be growing instead of lessening. I mean, we still have so many people in poverty and an anti-immigrant feeling in some people's hearts. Like all Christians and Catholics, I'm concerned about justice and the systemic inequities. 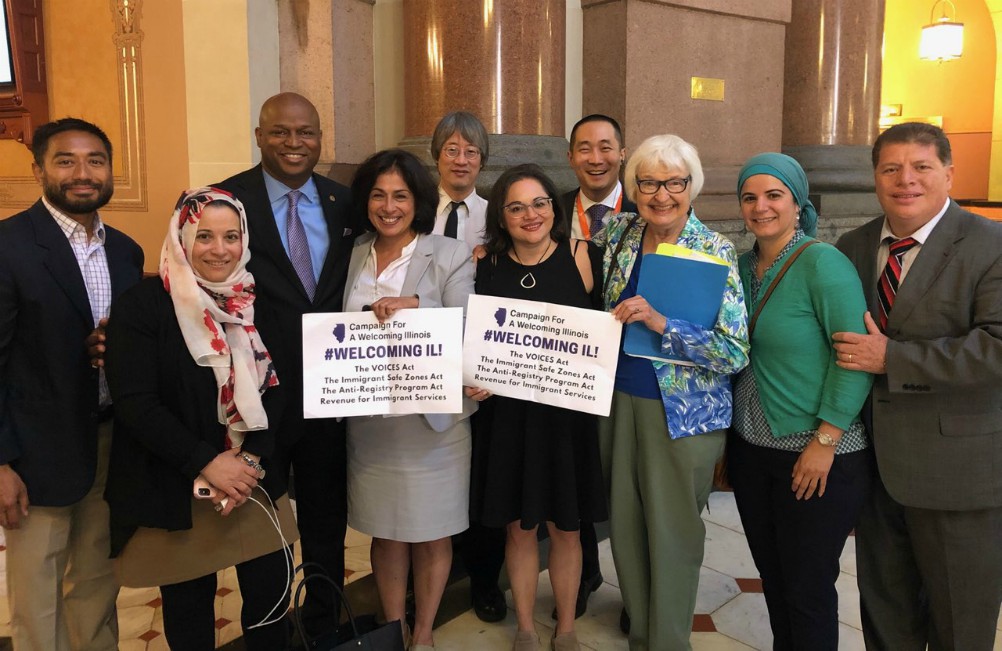 How do you see the Holy Spirit moving in your work with Project IRENE?

I am constantly praying to Sophia, the feminine name for the Holy Spirit. It's just astounding to me: I'll be on my way to see a legislator, and I'm praying to Sophia on the way from one building to the other, then I'll meet somebody on the way I needed to see. Or when I meet the legislator, everything goes perfectly well, and the legislator says, "Yes, I'll be happy to push for that bill. Thank you for telling me about it."

So many instances like this happen that I kind of laugh at myself. I think, "I keep Sophia so busy. How does she have time to do anything else?" I think the important aspect of doing this work is living out the values Jesus modeled in his life in the Scripture and the Catholic social teaching.

[Eleanor Nash is a student at Wellesley College in Wellesley, Massachusetts, studying English.]