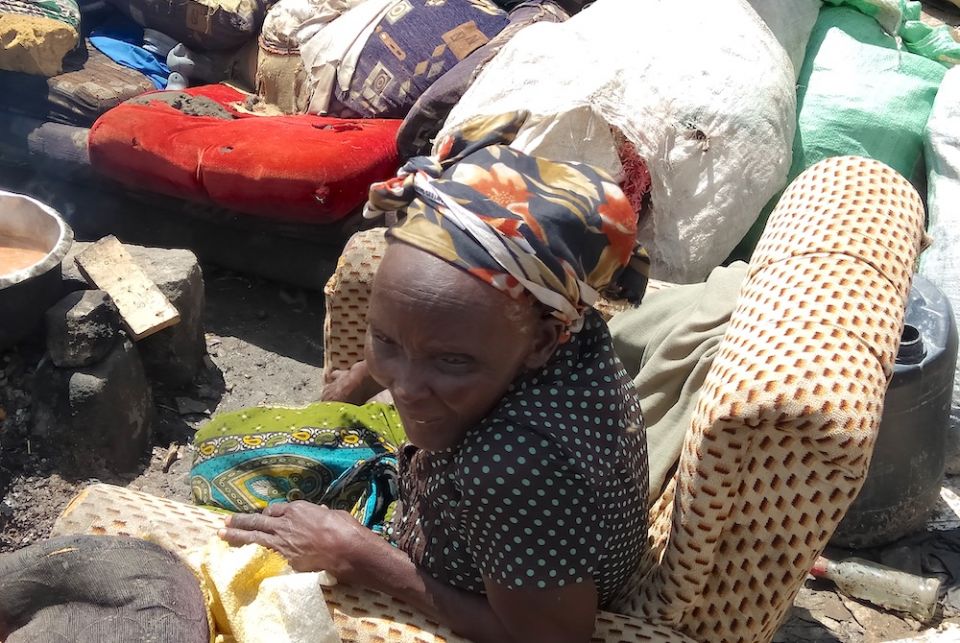 Kartel is from Umoja slum in Nairobi. Another social worker and I found this 4-year old at a garbage dump site, shivering with cold. We took him to the hospital and then looked for his sole caretaker, a 14-year-old brother. They were living alone much of the time, but we later discovered their grandmother, also a street dweller, living in a mabati (an iron-sheet shelter) flooded with water. We could see where they huddled together with goats at night to keep warm. When we suggested that the boys join us, the grandmother was relieved to know Bosco Boys would care for her grandsons.

This is just one story that I have learned since 2017, when I began working as a social worker with boys like these two at Bosco Boys. Right now I volunteer there, as I am studying for my bachelor's degree in sustainable human development at Tangaza University in Nairobi. The work at Bosco Boys is now part of my practicum requirement.

At the Bosco Boys informal school, I teach art and life skills and serve as counsellor and after-school tutor. This informal setting is a basic preparation for some of the boys to later attend Kuwinda, a primary boarding school. I like the boys and find them friendly and cooperative, and we have grown in mutual understanding and trust. I also find they are unusually responsible in doing their work, except at times when they fall behind in doing homework.

I think their responsibility is a result of having to live on their own and fend for themselves. But the discipline of study is challenging for some because — coming from street life — their listening abilities are not well developed, and they are easily distracted.

One of the methodologies proven successful for rehabilitation at the center is play therapy. The boys spend several hours a day in games. One of my challenges in working with the boys is understanding their slang. It is like another language. I have to ask them to explain what they are saying in ordinary language.

The boys are organized into four group houses, and positive competition is encouraged; they are rewarded for good behavior and completed assignments. Although this system is a way to help them to discipline themselves, as they can keep each other from "messing up," there are times when informal cliques erupt into fights, even over small issues.

Bosco Boys Langata rehabilitation center was established in 1994 by the Salesian Priests to help boys overcome addictions and behaviors learned on the street. Thirty-two boys ages 5 to 11 are undergoing rehabilitation at the moment, and more than 3,000 have benefited from this center. Some of the boys live at the center, but others are day students. The boys usually stay from one to two years, and a good number of them are successfully rehabilitated.

Most of the boys I work with are from the slums of Kibera (the largest Kenya slum), Mathare (the second largest slum), Rongai and other slums around the country. These very large slums are infamously tough, marked by widespread poverty, unemployment and high crime rates. It is not an easy place for children to grow up, although many do. Education is also limited because school fees are a luxury for most families living there.

Kartel and his older brother cc.jpg 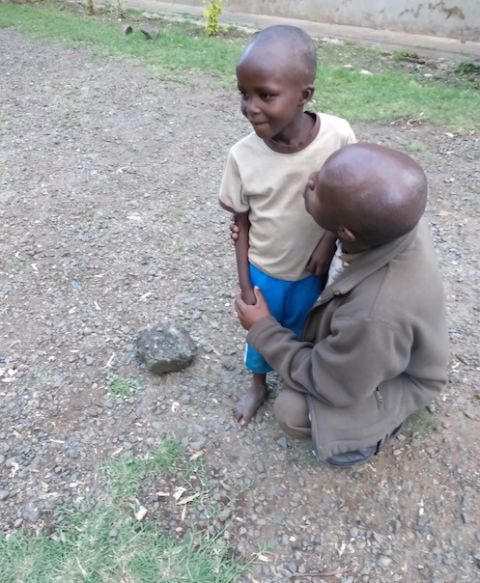 Kartel, left, with Salesian Fr. Lawrence Wambua, who is in charge of the Bosco rehabilitation center (Jackline Mwikali Mwongela)

Originally, street boys were called "parking boys" because they got paid to guard people's cars while the owners shopped. Now, social workers find the boys in many different settings, and some are referred to the center by different organizations, including the government.

Before the boys' admissions, we visit their homes as part of government policy to do a needs assessment to understand the context they are coming from. Each boy needs a committal order from the Kenyan court for him to join Bosco Boys. In the beginning, the boys stayed at the center during the entire two years, but later it became apparent that complete separation from parents or extended family hindered the rehabilitation process.

Without a family home to return to, the boys often returned to the streets. The policy then changed to allow the boys to go home or to their guardians during holidays and other times to re-establish those relationships. Parents and guardians are also encouraged to visit once a month to help the boys with laundry. These visits also give us opportunity to get to know them, have a meal together and counsel them about their own personal, parenting and economic needs. These visits become a lifeline for the boys.

Part of my current updating of my education was through on-line courses at Loyola University, New Orleans, where we learned about Catholic social teachings and how to apply them in our ministries.  One of the requirements was to design a project that integrated what we had learned. I decided to conduct a Catholic social teaching workshop in Swahili for the boys' parents and guardians, hoping they would better understand their rights and responsibilities about reverence and dignity. 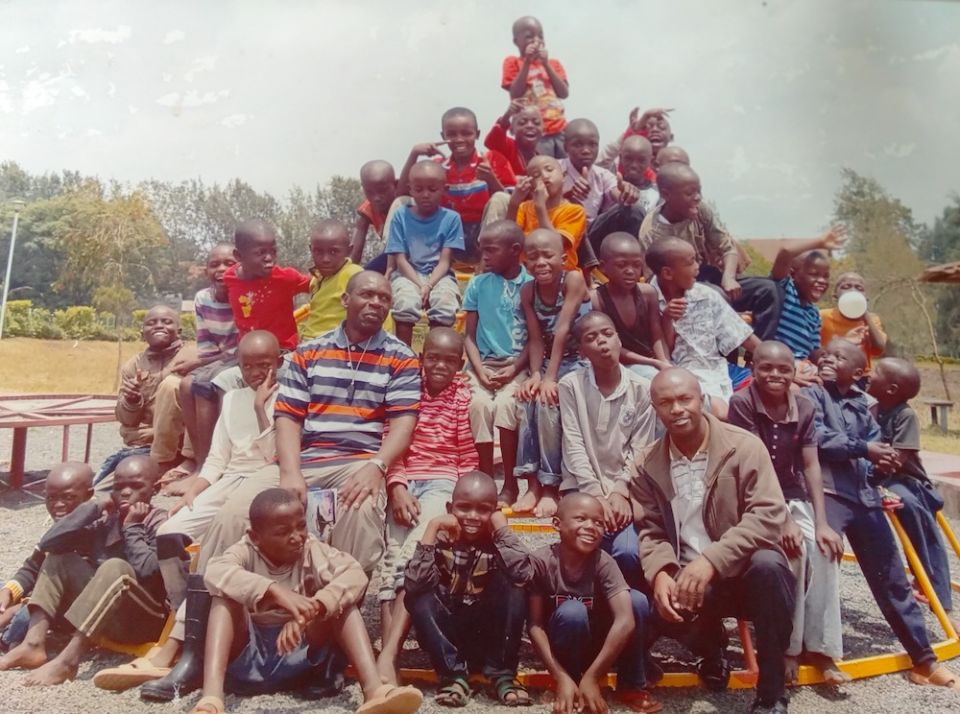 Boys from the Bosco center in Nairobi, which is run by the Salesians, pose with their instructors. (Provided photo)

Through the workshop we learned more about how unemployment creates serious disadvantages for the people in the slums. Both women and men do manual work for long hours — being paid very little — and their work environments are often inhuman. Most parents are day workers, and some, scavengers. Others brew illegal local beer or send their children out to beg. Their boys also were forced to work for employers who underpaid or failed to pay them. They lost their sense of dignity and self-esteem.

After that workshop, we at Bosco Boys decided to provide the guardians and parents with the skills to help them gain self-reliance. We have tried to motivate them and sensitize them to save even small amounts of income for future skills courses or to start small businesses. A good number of them followed through and have dreams of becoming entrepreneurs. Seeing their parents make these efforts will also help prevent the boys from going back to the streets. Unfortunately, we had just begun this when the coronavirus intervened. I can only hope what we started will continue once the restrictions are over.

I have loved my work and I see the presence of God in these children, especially in their transformation. Though most of them have encountered harsh treatment from their parents, they still acknowledge and appreciate them. It is my joy to see a child transform from past acquired behaviors and gain back his dignity. During the pastoral lessons, counseling and informal education, I am able to interact with the child, understand him better and treat him with the compassion which he lacked in street life. As a Loreto sister, I am called to bring life and hope to these young boys deprived of their freedom and choices in life. My listening to their sad stories is part of their healing.

[Jackline Mwikali Mwongela is a Sister of the Institute of the Virgin Mary (Loreto) whose academic preparation was in community-based development and sustainable human development. Before entering religious life, she was a senior social worker, working with people of different ages and social strata, mobilizing and facilitating their development. Since entering the community she has ministered as a pastoral program and counseling coordinator, working with children in need. Presently she is working as a human trafficking advocate.]

Nuns on the Bus veterans keep the faith in tumultuous times