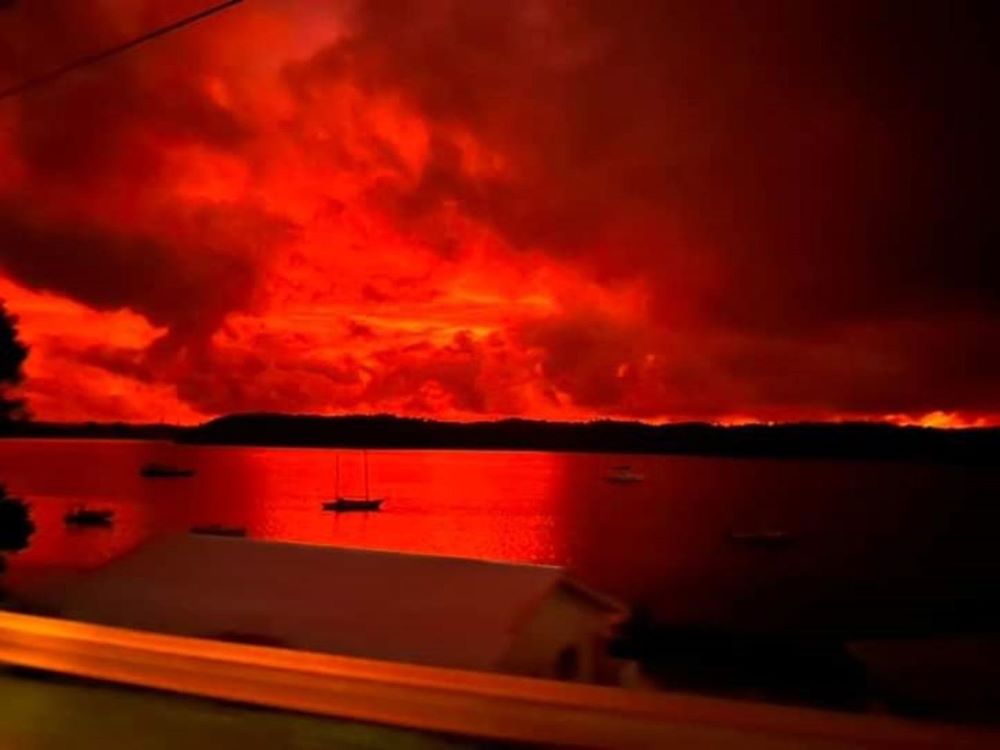 The night before the mid-January volcano eruption in Tonga, the sky grew dark with a blood red color. Scientists estimate the eruption the Hunga Tonga-Hunga Ha'apai volcano in the Pacific Ocean was about 500 times stronger than the energy of the atomic bomb that exploded in Japan in 1941. (Courtesy of Bernadette Alofaki)

This season of Easter is one filled with mystery. As I recall the volcano — one of the biggest eruptions in history — that occurred the evening of Jan. 14 on our island of Tonga, in the South Pacific, I am reminded of the day Jesus was crucified where Matthew speaks about how darkness came over the Earth and a huge sound of earthquake was heard (Matthew 27:45).

Tonga is a very small dot on the world map and is close to other island countries of Fiji, Samoa, Niue and New Zealand. It is called the "Friendly Island," and is the only remaining monarchy in Polynesia. Our first king was Siaoi Tupou, who entrusted the island to God with the national motto: "God and Tonga are my inheritance." Our small island is quite religious. Sunday is family day; families go to church, have a meal together and rest.

Just two days before Sunday, Jan. 16, we saw the sky become dark with a blood red color. We had never seen anything like it and wondered what it was. The following day, I went with Sister Clare, my community companion, to a nearby village to visit her family. While there, we heard loud thunder, so we went outside to look. At first it seemed like normal thunder, until we saw smoke filling the sky and a sudden loud bang and then another, even louder, shaking the whole Earth. We realized it was a volcano erupting.

Debris is seen on a beach following a volcanic eruption and tsunami, in Nuku'alofa, Tonga, Jan. 18, in this picture obtained from social media. (CNS photo/Reuters/Broadcom Broadcasting FM87.5/Courtesy of Marian Kupu)

We ran inside the house, but it seemed the volcano was erupting on our side of the island because our ears kept popping. The children were crying and we adults were in shock, not knowing what to do. Sister Clare calmed the children by getting them to pray quietly. The radio announcers were telling people to run to higher ground for safety, and to hurry because it was getting dark. Darkness came quickly, with deepening clouds of smoke covering us. We decided to go back to the convent to rescue our five puppies and get some supplies.

Fortunate to have a van, the whole family, with us sisters, jumped in and left quickly, along with the village community bus already filled with people who did not have vehicles. It took five minutes to reach the convent. I found the puppies, collected water and blankets and returned to the vehicle. The others, terrified, kept honking the horn for me to hurry. Knowing the convent was close to blowholes in the sea that could erupt and put us in danger only increased their fear.

Travel was difficult and dangerous because the roads were packed with people fleeing, and volcanic ash covered the windows making visibility almost impossible. I recalled a shortcut road to a place on higher ground, but stalled cars made it hard to move or see the road ahead. I went slowly, following the red tail light of a car ahead of us. We were eventually stopped because of congestion, but the radio and telephones kept us connected with others.

The sky around us was absolutely black, with no stars, no moon; our only light was that from nearby vehicles. We watched families walking to find shelter from the wind and ash and youth covering elders with blankets and umbrellas for protection. We prayed the rosary over and over. After two or three hours of waiting, we saw young and old men trying to clear the road enough for us to keep moving to higher ground. When we reached the place I had in mind, we found it already packed with people. The one building there became a shelter. It gave us more space than the vehicle and we felt safer.

People were happy to see us sisters and we shared the supplies I had brought. It was heart-breaking to hear the children asking, "Mom, why are we here? I want to go home." There was no electricity, so we used our flashlights and battery radios for information. People sat together playing cards and recalling the sight of the huge tsunami the volcano had engineered.

Most of us couldn't sleep, and by early morning we heard that it was safe to return home.  Because it was Sunday, a day when everything is closed, the prime minister announced that shops would be open until 2 p.m. No church services were held. People were told to pray as they could, wherever they were. We sisters left for the convent about 6 a.m. It was still standing but covered in ash. The whole island was isolated from the outside world without electricity, telephone or internet.

Families began coming together to clean up the ashes that covered everything. The island water supply was contaminated except for underground wells. Thankfully, aid also began arriving, but COVID-19 caused many delays. Until Feb. 1, when two dock workers were infected, we had never had one infection on the island, and suddenly we were under lockdown. Thousands of our people on both main and outer islands became infected. Six died, but the others recovered.

Our king and queen have been generous in giving land and promising to rebuild homes for those whose homes were destroyed. The government is providing counseling to those who were traumatized by the volcano eruption.

Scientists who watched the entire event are mystified how we survived the eruption, which they estimate to be about 500 times stronger than the energy of the atomic bomb that exploded in Japan in 1941. The Hunga Tonga-Hunga Ha'apai volcano in the Pacific Ocean on Jan. 15 created a rare event never before detected with modern instruments. A powerful tsunami raced forward, leaving an untold number of lives hanging in the balance.

The eruption was heard in Alaska, 6,200 miles from the epicenter. Hunga Tonga and Hung H'apai were originally the highest points along the rim of the caldera until the eruption nearly leveled them.

It truly was an event heard around the world: the shockwave circled Earth for several days. We sisters were grateful to see the Easter sunrise! Please keep praying for Tonga and its people.