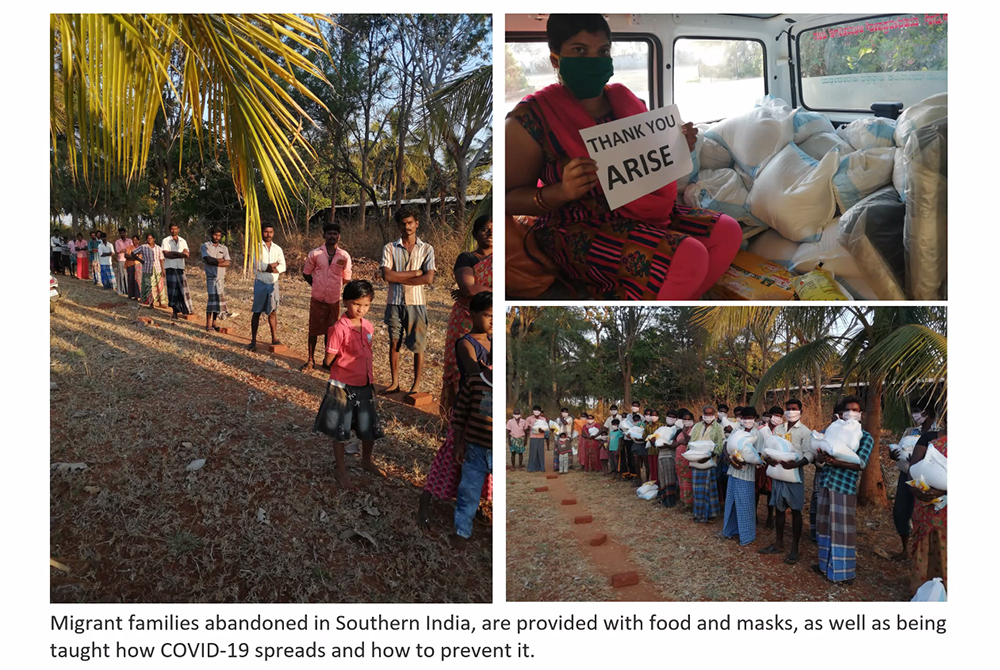 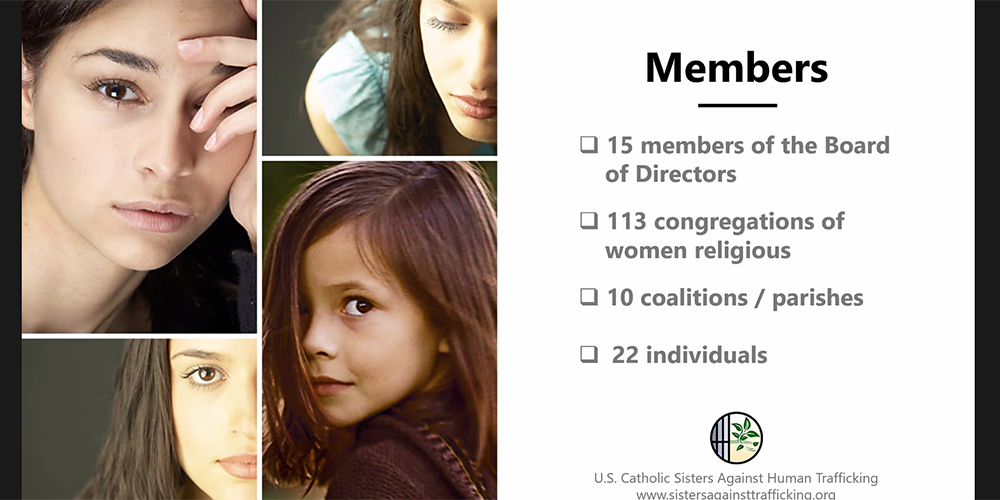 At a webinar Dec. 2 hosted by the Conrad N. Hilton Foundation's Catholic Sisters Initiative about human trafficking, Jennifer Reyes Lay, executive director of the U.S. Catholic Sisters Against Human Trafficking, gave participants a snapshot of the organization and its work. (GSR screenshot)

Those involved in efforts to end human trafficking fear that the global pandemic and resulting lockdowns are increasing the numbers of people forced into trafficking.

"The broad upshot is that we need to brace ourselves for 2021 and expect a huge increase in the number of people affected" by trafficking, Luke de Pulford, director of the U.K-based anti-trafficking organization Arise, said during a Dec. 2 webinar by the Catholic Sisters Initiative of the Conrad N. Hilton Foundation. (The foundation is one of the funders of Global Sisters Report.)

"We don't know how bad the damage is yet," de Pulford told GSR in an email after the event. "[But] when the statistics come in, they are going to be deeply shocking and troubling."

Those being lured into trafficking work — be it slave labor or sexual trafficking — are those "already struggling" and at risk due to poverty, Sr. Jane Wakahiu, associate vice president of program operations and head of Hilton's Catholic Sisters Initiative, said during the webinar.

"COVID has exacerbated dramatic increase in unemployment, reduced or loss of income for individuals working in informal or low wage sectors which leads to vulnerability, and at-risk individuals find themselves in precarious circumstances," Wakahiu told GSR in an email following the webinar.

A conversation on sisters' anti-trafficking work

Join Global Sisters Report on Jan. 19, 2021, as we facilitate a conversation with Sr. Gabriella Bottani and Sr. Jean Schafer on sisters' anti-trafficking efforts worldwide in preparation for the International Day of Prayer and Awareness Against Human Trafficking. Click here to register for the Witness & Grace program.

"The principal underlying cause of human-trafficking is poverty and the search for better economic opportunities. Prevention is impeded not just by levels of poverty itself but by a series of vulnerabilities, including armed conflict and migration, homelessness, disabilities, lack of supportive families, and racial and ethnic prejudice."

"Populations which are more vulnerable [to trafficking] include those who are homeless, unemployed, and struggling to support their families," Jennifer Reyes Lay, another webinar participant who heads U.S. Catholic Sisters Against Human Trafficking, told GSR following the event. "As the pandemic continues with little economic relief or support in sight, we can anticipate that there will also be an increase in exploitation and trafficking as traffickers take advantage of these vulnerable communities desperate to survive."

In his presentation, de Pulford cited some grim realities.

Though even in the best of times "human trafficking is hard to measure," and noting that there is not yet hard data on the pandemic's effect on human trafficking, de Pulford said, "we do have a clear impression of what makes people vulnerable to human trafficking, and the indicators around that are very troubling indeed."

In October, the World Bank said that global poverty is expected to rise in 2020, with the COVID-19 pandemic "estimated to push an additional 88 million to 115 million people into extreme poverty this year, with the total rising to as many as 150 million by 2021, depending on the severity of the economic contraction."

Another concern, de Pulford said, is the mass movement of people – with "lockdowns and business closures [prompting] millions of workers to try to return to their homes. Not all of the newly unemployed reach home. Many turn to illegal means to sustain themselves."

For those who do successfully reach home, such as an estimated 40 million internal migrant workers in India, "many find there is no work when they get there," citing the example of the Godda district in eastern India, where one small town where Arise does work had to prepare for the return of 10,000 migrants.

Also complicating the situation are huge changes in the remittance economy — the phenomenon of families in impoverished areas being dependent on financial support by migrants who have left their communities.

"COVID has decimated this income, with a double effect for the person earning and to whoever they were sending money. Remittance flows to low- and middle-income countries will fall by 19.7% in 2020," de Pulford said, a decline of $88 billion. That, he added, is "one of the sharpest declines in recent history."

"The upshot of all this is that the key drivers of human trafficking have hugely increased, and with them vulnerability to exploitation," he said.

Child trafficking is also likely increasing, he said, "with alarming trends indicating that worse is to come." That is because an estimated 42 to 66 million more children "could fall into extreme poverty and nearly 1.5 billion children around the world have been kept away from school for three months under national lockdowns," he said.

One concrete data point, he said, is that in the Philippines, between March to May "there were 279,166 cases of online child sex abuse — a 73% increase from the same timeframe in 2019" according to government figures. "This all paints an exceptionally bleak picture," he said.

In the United States, the outlook is also sobering, Reyes Lay said. While it is not possible to know the pandemic's direct impact on trafficking, she told GSR in an email that "what we are seeing and hearing is that more people are being pushed into desperate situations of poverty and eviction with businesses closing and little to no relief from the federal government to support those who most need it."

Given the lack of government support, "we can anticipate that there will also be an increase in exploitation and trafficking as traffickers take advantage of these vulnerable communities desperate to survive," she said.

Even with these substantial challenges, the anti-trafficking advocates said there are signs of hope. De Pulford said during the webinar there is increased government scrutiny and regulation of supply and value chains by the United States, the United Kingdom and the European Union. Also, he said, there are moves for greater international culpability for traffickers and more legislation to crack down on child-trafficking.

He also noted the increased emphasis on strengthening "frontline" community organizations — a key focus of his organization's work. "During lockdown, the only people able to help were those embedded in at-risk communities who are trusted by those communities," he said. He praised the grassroots work of Catholic sisters, who are trusted figures in the communities in which they live and serve.

No nongovernmental organization or international organization has the dispersion, or grassroots connections, that Catholic sisters have, de Pulford said during the webinar, adding that the "experience and wisdom of sisters is not adequately appreciated."

The "renewed realization" that there is no substitute for grassroots work, he said, has put a spotlight "on those embedded in at-risk communities, giving their lives in service to those on the margins. In this, as ever, sisters are quietly leading the way." 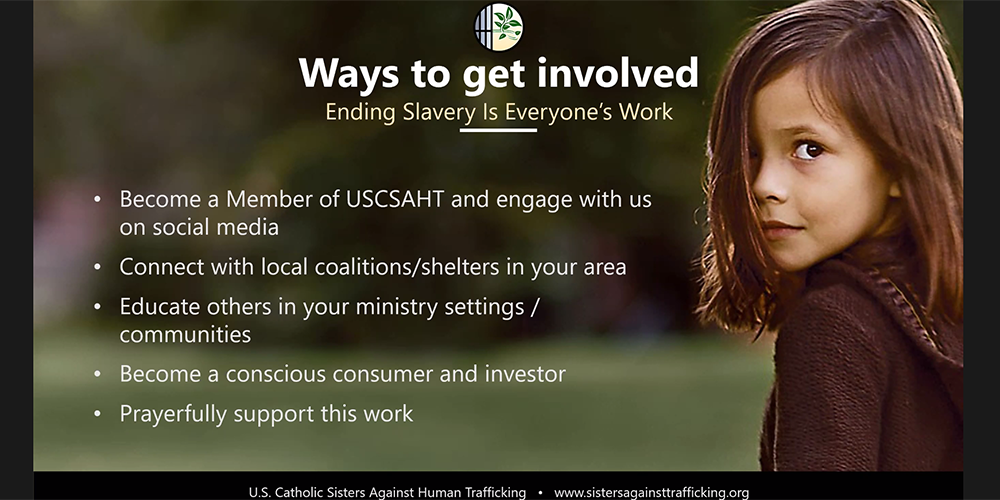 Jennifer Reyes Lay, executive director of the U.S. Catholic Sisters Against Human Trafficking, told website participants how they can help in the fight against human trafficking. (GSR screenshot)

Reyes Lay agreed, saying, "Sisters are creative and resourceful in responding to challenges as they arise, including during the current pandemic, adjusting programming and strategies to respond to the current needs. Also, the sheer number of sisters and congregations around the world lends itself to collaboration and networking across states, across countries, and even across continents as we tackle this global issue together."

One example of a locally based collaboration is Milwaukee's Sisters Program South — eight women's congregations working with the Benedict Center to assist women in what webinar participant Sr. Linda Szocik, a member of the Sisters of St. Joseph of the Third Order of St. Francis, called the "street-based sex trade."

Szocik told webinar participants that while the pandemic has kept her away from the program site since February, she keeps track of the progress made by some of the participants, including a woman she identified as Carol, a woman in her 40s who was trafficked as a child, and, she said, eventually became addicted to drugs.

"In Milwaukee heroin addiction is endemic," Szocik said, and Carol became very ill with liver disease and sought out help through Sisters Program South. Now on a methadone treatment plan, Carol's "path to housing went from hotel vouchers to a safe house for two to three months, and she is now in her own apartment."

"Carol connects regularly with her counselor and case manager, and is participating in peer support. She expresses a desire to help other women. I will not be surprised if she is nominated to a member on our advisory board in the near future."

Such success is one reason sisters keep commitments to anti-trafficking ministry, and why foundations like Hilton strongly support the work of such ministries.

"Sisters have not only demonstrated their capability but are in the frontline supporting in prevention, protection, praying and rehabilitation of survivors. Survivors need a variety of support, including psychological, health care, spiritual, and connecting them to employment. Sisters recognize every person's dignity; they don't judge but walk with the individual in their journeys of healing and wholeness."

Wakahiu said the foundation is committed to networking and collaboration; training; providing direct services; advocacy and communications; and research. Its partners in such efforts include Talitha Kum, Arise, U.S. Catholic Sisters Against Trafficking; and the Coalition to Abolish Slavery and Trafficking.

Learn more at our next Witness & Grace Conversation Jan. 19, 2021, focusing on sisters' efforts against human trafficking.