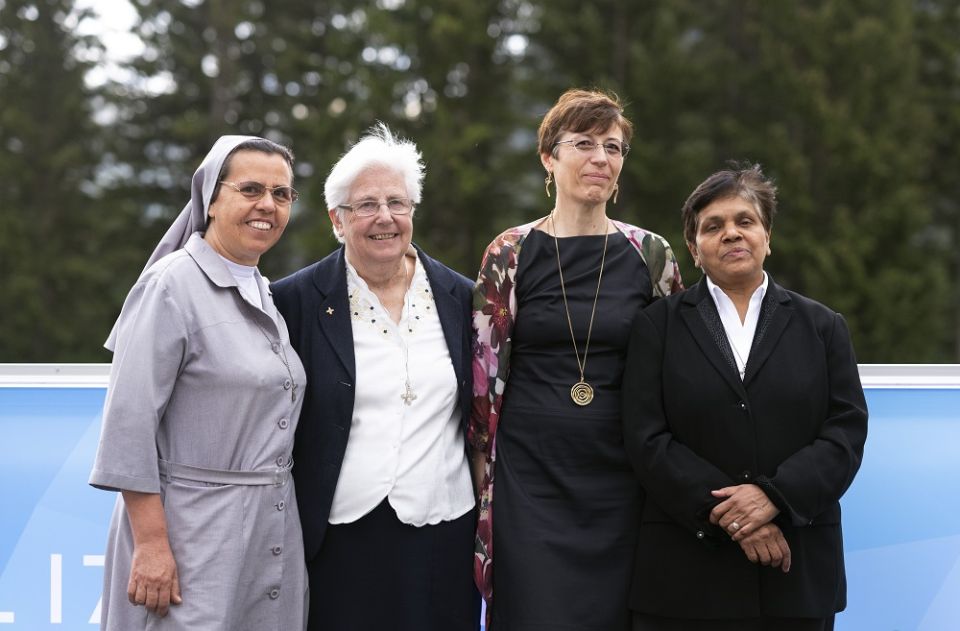 Davos, Switzerland — By sharing their experiences of working with the poor and the marginalized and building partnerships with government and business leaders committed to improving people's lives, religious sisters are convinced that "we can bring about substantial and systemic change," said Loreto Sr. Patricia Murray.

As executive secretary of the women's International Union of Superiors General,  Murray was in Davos in late May for the World Economic Forum and, especially, to participate in events at the forum's "Goal 17 Partnership Space," a meeting space for business leaders and representatives of nongovernmental organizations.

The Global Solidarity Fund and the Conrad N. Hilton Foundation sponsored an event in the space May 23, "Advancing Courageous Leadership: Elevating Voices from the Margins," featuring Murray; her associate executive director, Sr. Mary John Kudiyiruppil, a member of the Missionaries of the Holy Spirit from India; and Salesian Sr. Ruth del Pilar Mora, a native of Colombia who worked in Ethiopia for years. The Hilton Foundation is the primary funder of Global Sisters Report.

The more than 600,000 Catholic sisters in the world know and share the lives of the poor, they work alongside them, and they do not run away, Murray said.

The business and government leaders in Davos, she said, are serious about finding solutions for global challenges like climate change and welcoming and integrating migrants and refugees.

"A lot of sisters, priests and brothers who are doing extraordinary work for the development of people spend time looking for financing," Murray said, and in Davos "you have the whole business world here, leaders who do want to make a difference."

"One of the things that has really impressed me" is listening to business leaders speak from a moral and spiritual perspective, although "they may not use those words," she said. But it is clear there is "a sense of social responsibility growing at every level."

Murray said the Global Solidarity Fund's support is important not only for funding the development work of religious and helping them partner with business, but also in helping the sisters learn how to advocate for and with the poor.

The Global Solidarity Fund and Unilever, the London-based multinational, also were joining forces to sponsor a discussion in Davos on May 24 on "Job Creation on the Edges: Refugees, Markets & the Power of Partnerships" and to share ideas from their joint project in Colombia to support religious orders working with migrants and refugees to start small businesses and to train people to fill the jobs local companies and industries need.

Marta Guglielmetti, executive director of the Global Solidarity Fund, said many migrants and refugees have no choice but to accept charity when they first arrive in a new land, but they want to work and support themselves and their families.

The project in Colombia, she said, proves that similar initiatives can help migrants and refugees, but also help local industry and their communities.

"We are recruiting the private sector, asking them to recruit migrants," she said.

A lesson learned: God as a source of trust

Seeing the United Nations at work

Changing fields: Notes from the US, Ethiopia and Switzerland

Our shelters are ready and waiting