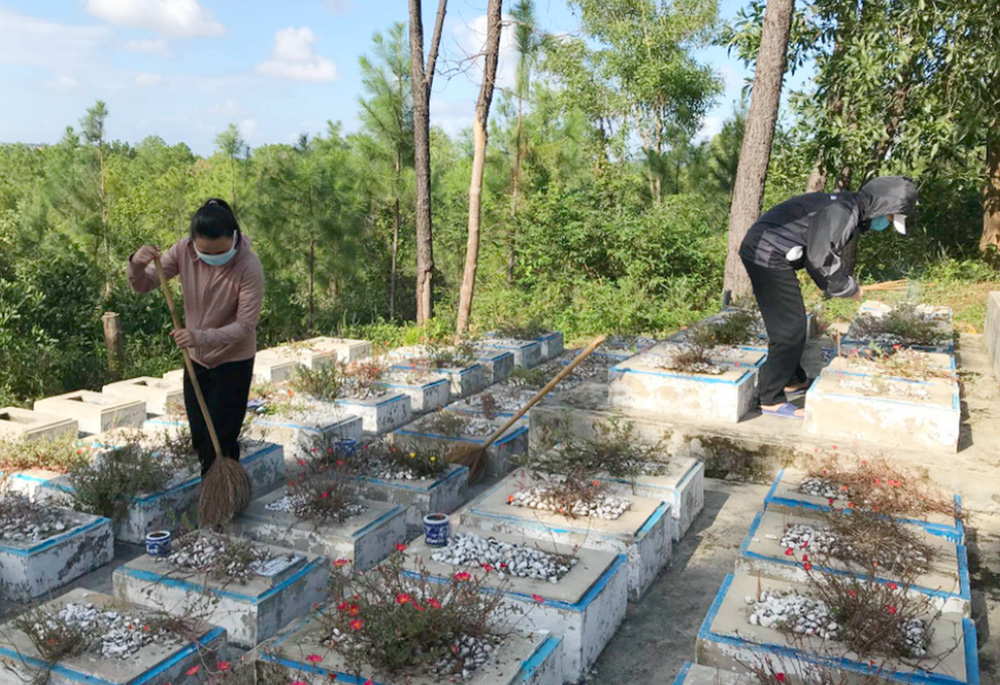 Hoa used to fall into a depression and contemplated suicide after she had an abortion in 2014. (She asked not to use her real name because of the stigma against women who have abortions.)

In late 2016, a motorbike hit Hoa as she crossed a street in Hue in central Vietnam to get medicine for a suicide attempt. As she received treatment for her wounds in a local hospital, a volunteer from Thap Sang Hy Vong (Raising Hope), a group founded by the Daughters of Our Lady of the Visitation to help women suffering post-abortion trauma, regularly visited, consoled and offered her chao, a kind of food for patients.

Hoa's mother told the volunteer about Hoa's depression and her sad story. The volunteer shared with Hoa her own story of having an abortion after her boyfriend left her and how she overcame her post-abortion trauma and grief. 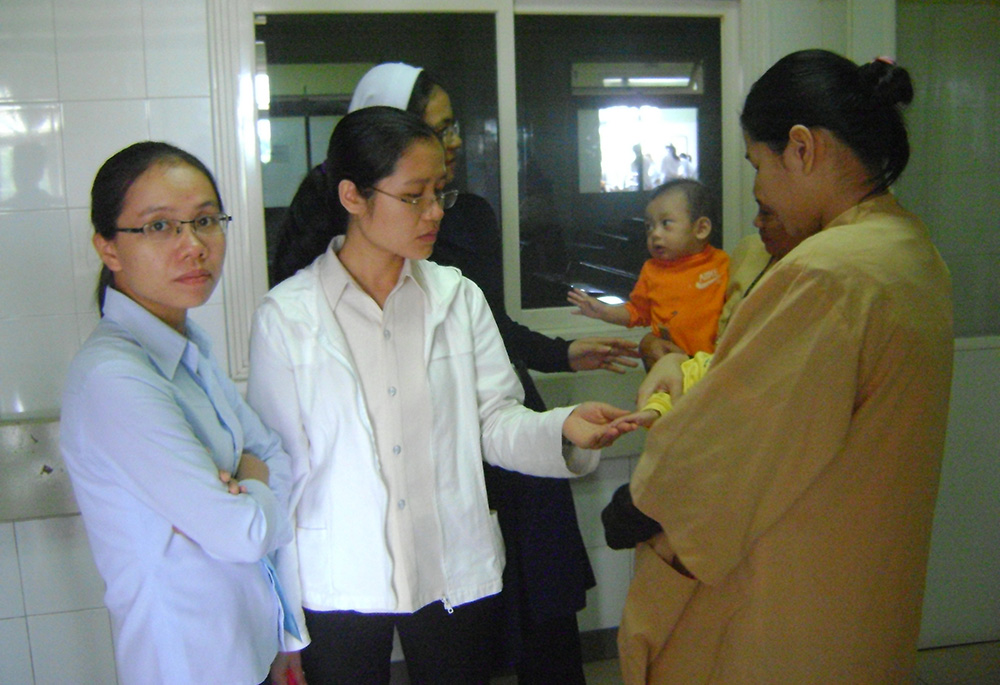 Three Daughters of Our Lady of the Visitation visit with two mothers and their babies Dec. 27, 2021, at a hospital in Hue, Vietnam. (Joachim Pham)

"I let out agonized cries, releasing all my pent-up emotions while she was sitting by me and comforting me," said Hoa, who is now in her late 30s.

She said the women became best friends, and Hoa decided to join Thap Sang Hy Vong two years later. The Daughters of Our Lady of the Visitation gave her 5 million dong ($220) to start her business selling fruit and juices on the sidewalk in the capital of Thua Thien Hue province, which allows her to support her mother.

Members of Thap Sang Hy Vong meet every three months to pray; learn practical skills in health care, building relationships, psychological issues and family life; and plan charitable work and visits with pregnant women to encourage them not to get abortions. They also make donations to help Thap Sang Hy Vong support people in need and provide free meals for patients at local hospitals and food for poor families. 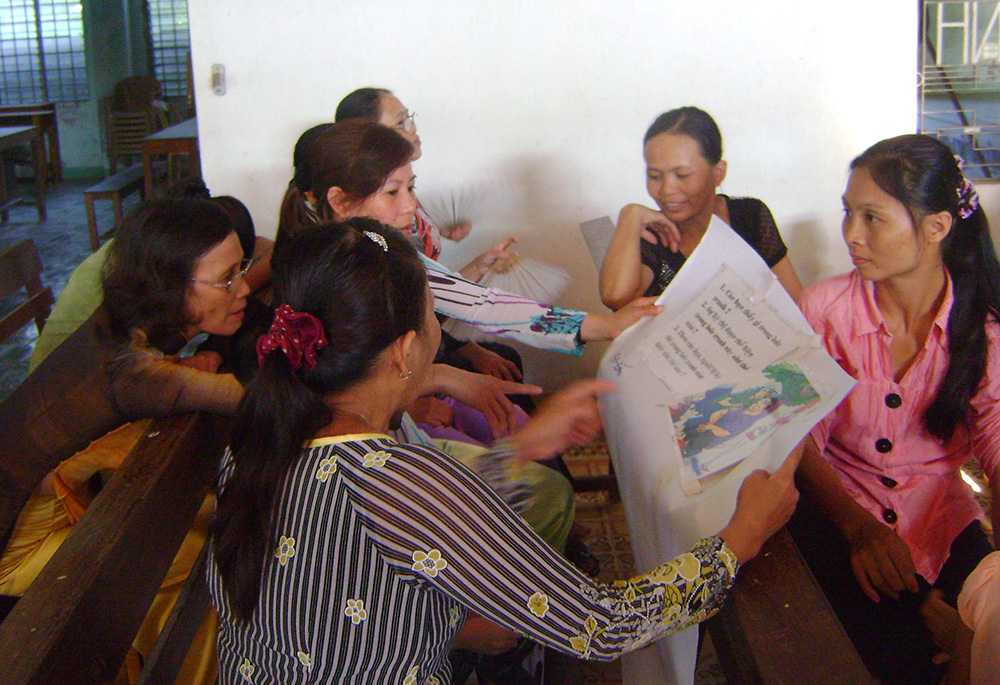 "I have now blown off steam and had a new lease on life since taking part in the group's activities," Hoa said. "I am really appreciative of all the help the nuns and group members have given me."

Sr. Mary Bui Thi Vinh, Thap Sang Hy Vong's founder, said she and four other sisters visited Ngoc Ho cemetery for aborted fetuses in Huong Tra district in 2015 and invited three visiting Buddhist women to join their prayers for the unborn children. The women, whose unborn children are buried in the cemetery, became close with the nuns and sought emotional support from them.

Vinh, head of Thien Xuan convent in Phu Vang district, founded the group the following year to create opportunities for women who have had abortions to reconcile themselves with their unborn children, experience divine mercy and build up a civilization of love and culture of life.

The group has grown from five women to 34. Three sisters journey with the women, who had abortions or considered them after they got pregnant and their boyfriends left them. She said such women often suffer from depression, low self-esteem, and nightmares about their unborn children killing them to get revenge. 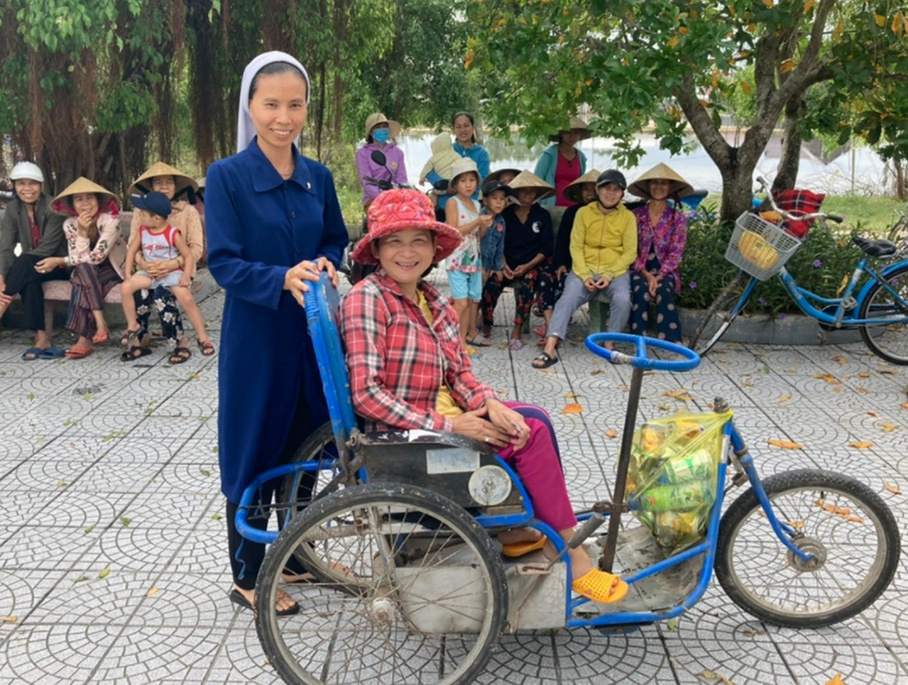 Sr. Mary Bui Thi Vinh of the Daughters of Our Lady of the Visitation with a woman who uses a wheelchair pose Oct. 30, 2021, in Hue, Vietnam. (Joachim Pham)

Vinh said the nuns offer the women health care, vocational skills, bikes and money to do business, scholarships for their children, and money to cover part of their medical fees if they get sick. They also visit the women when their relatives have weddings and funerals and invite them to attend religious ceremonies.

The women make annual pilgrimages to religious sites and visit local cemeteries for aborted fetuses twice a year — on the feast of Holy Innocents each December and the second day of the Lunar New Year, which is designated for ancestors, in February — when they clean the graves of the unborn children.

Vinh said helping people in need is an effective way for the women to integrate into the community and heal themselves after their abortions.

Hoa said group members donate up to 50,000 dong ($2.20) each monthly as part of their charitable work. They are also given money from local benefactors to help people living in poverty. 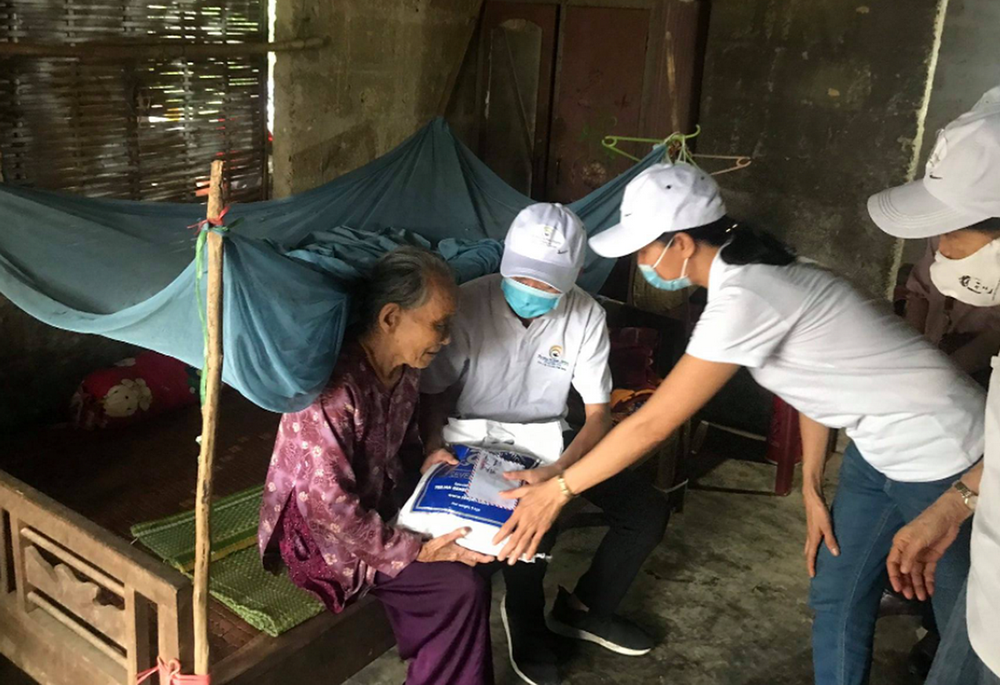 So far this year, the women have provided help to 35 families in need, gifting them rice and li xi, or lucky money, beginning in January so the families could celebrate Tet, the Lunar New Year festival that runs Feb. 1-4.

Those families sell food on streets and in traditional markets or work as lottery ticket sellers and motorbike taxi drivers. They are badly affected by lockdowns meant to contain COVID-19.

Nguyen Thi Hoat, 78, lives alone in a 12-square-meter bamboo hut in Huong Tra district. The Buddhist, who lives on a government monthly allowance and food from her neighbors, said her two children have not visited her for the past three years because they do not have the money to travel to see her from southern provinces. 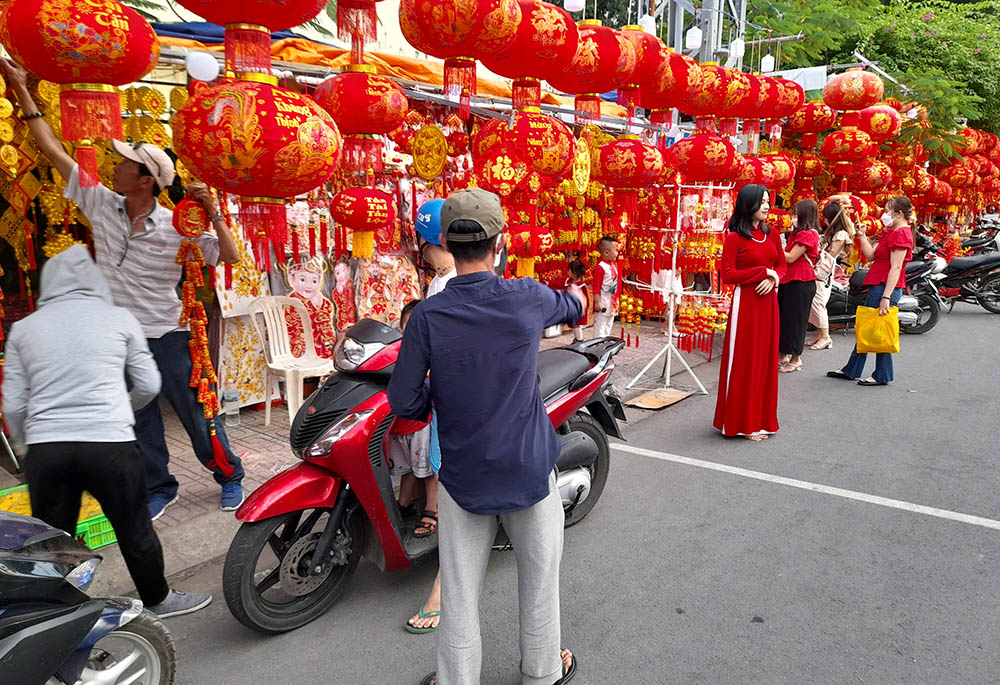 "This year, I am dancing in the streets that the women visited and gave Tet gifts to me," she said, adding that few people have come to visit her in the last few years because of the pandemic.

Hoa said the group also plans to give notebooks, pens and other school supplies to students from poor families.

"Doing charitable work is an effective way of atoning for our grief and act of having abortions," she said.

Before Lan joined Thap Sang Hy Vong in 2018, she had spent three years in jail for drug trafficking, had two abortions and left a child near a railway. Her stepmother had mistreated her, and boyfriends had left her pregnant and on her own.

"If I did not participate in group activities, my emotional traumas — such as hatred, resentment against fate and boredom — remained deeply ingrained in me and could turn me into an evil woman who seeks revenge on those who offended me," said Lan, who asked not to use her real name because of local stigma against abortion.

Thap Sang Hy Vong gave Lan a bike and money to trade used items for a living. Even though she has HIV/AIDS, "I try to maintain my health so that I can join others in serving COVID-19 and natural disaster victims to make amends for my sins."

Hoa said she daily finds joy in charitable activities and casual encounters with others and writes about them in her diary.

"I wish to sponsor a group of street children in the future, as they certainly need home care," she said. "That is what I can do for my own children."