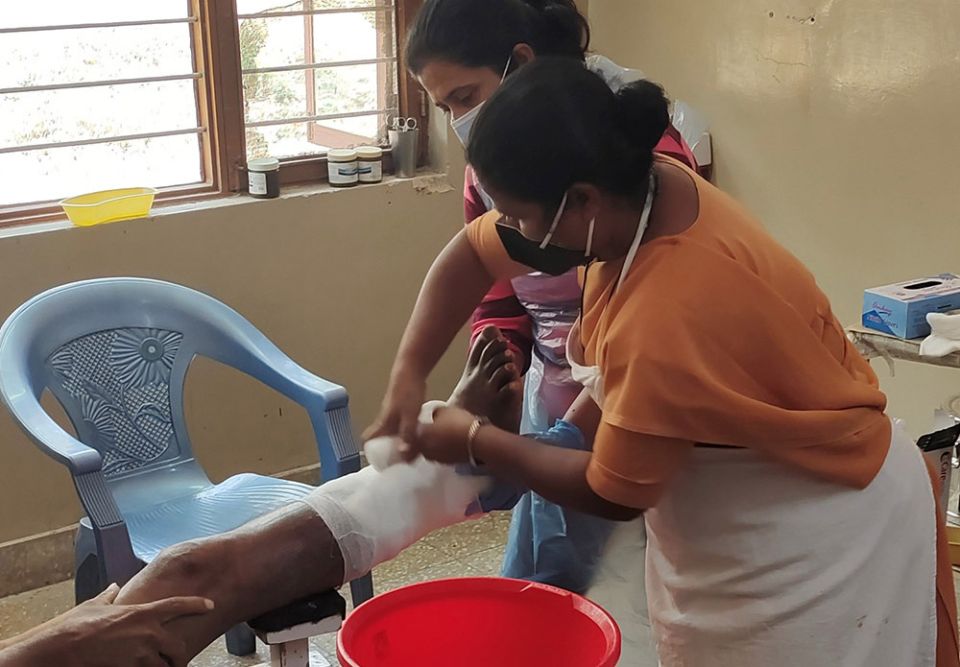 Sr. Fathima Mary Lourdraj bandages a patient at Sumanahalli's clinic in Bengaluru, India. The main charism of her order, the Franciscan Sisters of the Immaculate, is to serve those afflicted with leprosy. (Thomas Scaria)

Bengaluru, India — Nuns from four congregations have been credited with merging their charisms to devise an integrated approach to treat and rehabilitate leprosy patients in this southern Indian city.

"We follow different charisms and spirituality, but when we work together, they help people differently," says Sr. Christina Fernandes, a member of the Franciscan Sisters of the Immaculate who serve the Sumanahalli Society in Bengaluru, capital of Karnataka state. 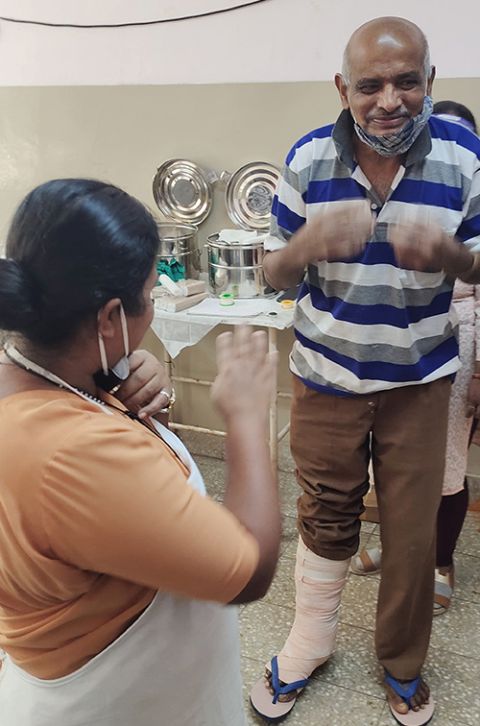 Sr. Fathima Mary Lourdraj works with a resident of the Sumanahalli rehabilitation center after his legs were bandaged. (Thomas Scaria)

Leprosy, or Hansen's disease, is a chronic infectious disease caused by a bacterium that primarily affects the nerves outside the brain and spinal cord, the skin, upper respiratory tract, eyes and lining of the nose.

Claretian Fr. George Kannanthanam, director of the Sumanahalli Society, says the credit must go to "the inter-congregational forum of sisters that has provided a dignified life to more than 11,000 leprosy-affected people in the past 45 years," when the society was founded by the Bangalore Archdiocese.

This year's World Leprosy Day theme was "United for Dignity," which, the priest says, is true in the case of the sisters and patients at Sumanahalli.

"Although we work according to the individual charism, they all merge to meet the same goal — place the leprosy patients back in society as productive citizens," Fernandes, a nurse, told GSR as she washed and bandaged the wounds of patients in a clinic on the Sumanahalli campus. Her congregation was founded in 1876 in Valencia, Spain, to take care of leprosy patients, she added. 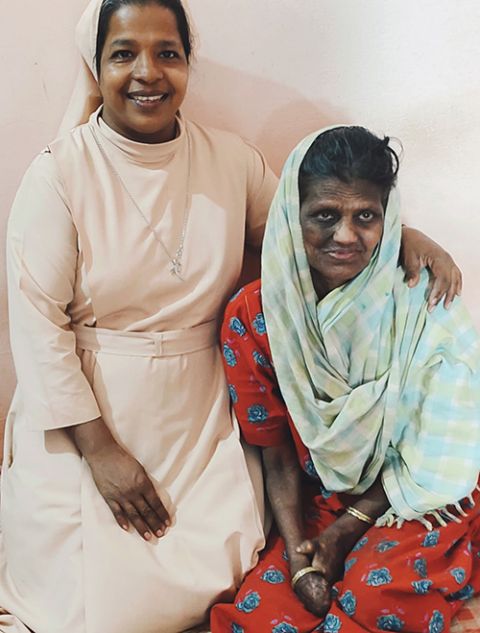 Sr. Christina Fernandes, left, of the Franciscan Sisters of the Immaculate says she draws motivation from the woman at right, who was one of the first patients at Sumanahalli and is like a mother to the sisters. Fernandes has served there for 26 years. (Thomas Scaria)

Currently, the Franciscan and Tarbes congregations have deputed five nuns each to serve Sumanahalli while residing on the campus. The Montfort congregation now sends three sisters and the Daughters of the Church assigns two to work at Sumanahalli.

The Franciscans manage the clinic while the Tarbes sisters attend to the patients' education, job placements and housing projects. The Montfort sisters are engaged in community surveys, clinics and referrals, and the Daughters of the Church look after the patients' overall care.

St. Joseph of Tarbes Sr. Mary Mascarenhas, who has worked in Sumanahalli for four decades, points out that India now accounts for more than 50% of new leprosy cases in the world, although the World Health Organization in 2005 declared leprosy an eliminated disease. India too claimed leprosy was no more a health issue.

Such declarations have only led to "reducing attention to the problem of leprosy in society and cutting down on funds," laments Mascarenhas, who is often called the "Mother Teresa of Bangalore" for her work among leprosy patients.

The 80-year-old nun says they could correct leprosy patients' physical wounds and deformities, but the wounds caused by social stigma and isolation are "so deep and take years to heal."

After the WHO declaration, Amici di Raoul Follereau (AIFO, Friends of Raoul Follereau), an Italian agency that used to fund Sumanahalli from 1976, stopped the aid. 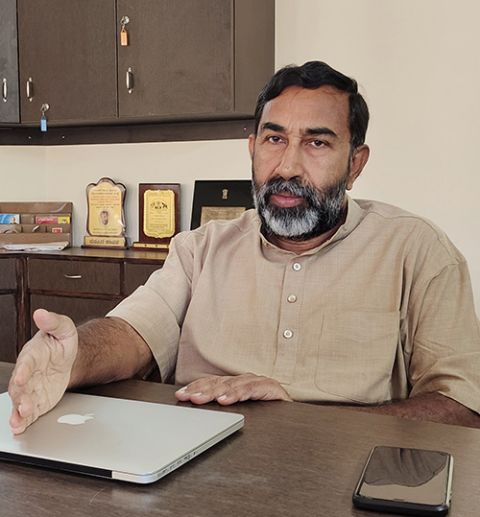 Claretian Fr. George Kannanthanam, the director of the Sumanahalli Society, won a 2003 award from Indian President Abdul Kalam as "Best Employer for the Disabled" and for his leadership in helping to eliminate leprosy (Hansen's disease) in India. (Thomas Scaria)

Kannanthanam says leprosy may be eliminated in the government records, but "our community teams continue to bring new cases forcing us to look for local funds."

Mascarenhas' congregation educates the leprosy patients' children and raises them with dignity.

For this, they set up St. Joseph's School, which uses English as the medium of instruction, inside the Sumanahalli campus where around 650 students from kindergarten to the 12th grade now study.

St. Joseph of Tarbes Sr. Messiah Joseph, who teaches in the school, says the children "give a real foundation for my vocation."

The school's vice principal, St. Joseph of Tarbes Sr. Deva Priya, says she enjoys interacting with the students. "Each day is different with the students and each session is the fulfillment of my divine call," she told GSR.

Even the students sounded happy.

Geethanjali and Huligama, two ninth-grade girls in the school, told GSR that the school instills in them confidence and self-esteem.

"My parents are daily wage earners, but I want to become a government officer," Geethanjali said.

Sumanahalli also houses patients with other diseases such as HIV/AIDS. GSR visited Support, an HIV/AIDS rehabilitation center inside the campus, served by the Franciscan Sisters of the Immaculate.

Support caters to 18 destitute women and a few men who were either rejected by their families or referred by the government retention homes, Susai told GSR. "They have no one and nowhere to go, so they stay with us," she added.

She said the sisters' role is to support them to become independent.

At lunchtime, all the sisters working in Sumanahalli assembled in the dining hall with around 100 residents.

"Our main meeting point is the eating place, where we interact with both the sisters and the patients," says Sr. Fathima Mary Lourdraj, another Franciscan sister who just returned after attending to patients in the clinic.

The residents of Sumanahalli share lunch with the sisters, volunteers and staff. On the day GSR visited Sumanahalli, the food was served by a Hindu family in a celebration marking their wedding anniversary. (Thomas Scaria)

She told GSR that she learned to wash and clean the patients' wounds from their sisters who used to come from overseas. "I was amazed at the dedication and commitment of the sisters and volunteers from abroad," she added.

The overseas nuns and volunteers stopped coming to Sumanahalli two years ago because of the COVID-related travel restrictions.

Mary D'Souza, a nurse and a lay associate of the Good Samaritan Association, visits Sumanahalli twice a month as a volunteer. She says nursing is a vocation like that of the sisters. "I really enjoy it," she told GSR.

Sr. Leela Cheenottu Vattukulam, a Daughter of the Church, says the Italian nuns have served Sumanahalli since 1978.

Vattukulam, who was involved in treatment programs at Sumanahalli from 1981 to 1992, recalls working with the Franciscan sisters in clinics. She continues to serve leprosy patients in Mandya, 62 miles southwest of Bengaluru.

"It was a joy working together with nuns from other congregations, and getting involved in activities to settle the patients back in society," Vattukulam told GSR.

GSR visited such a village, Kenkeri, 19 miles from Sumanahalli, with 25 houses, a clinic and a community center.

Several people there told GSR they now live in dignity, which they could never have imagined as a leprosy patient.

12. Leprosy patients who have recovered are rehabilitated with jobs, either in government or in private sectors. Several Sumanahalli residents work in Ahalli, a garments unit established on the same campus. (Thomas Scaria)

Among them were Nagaraj and Rathna, who Jan. 30 celebrated the 20th anniversary of their marriage after their leprosy was cured. "Thanks to Sumanahalli sisters, we are happily settled with government jobs. Our son is doing his bachelor of science in nursing," Nagaraj told GSR.

One of them is Harshita, who had come to Sumanahalli as a child with her mother, both burn victims from an acid attack by the husband and father. Harshita is now a software engineer in Bengaluru.

"I have come to this level only because of Sumanahalli. My ambition is to support education of some girls like me," she told GSR over a phone call from her office. Harshita's mother works in a candle-making unit in Sumanahalli.

The Sumanahalli story began in 1976, when the Karnataka government asked the Bangalore Archdiocese to manage a program for wandering lepers in the city. The government allotted 60 acres in the city's outskirts for the project to be located.

"Although the coordination is done by priests from time to time, it is the sisters who actually manage the Sumanahalli," Kannanthanam acknowledges.