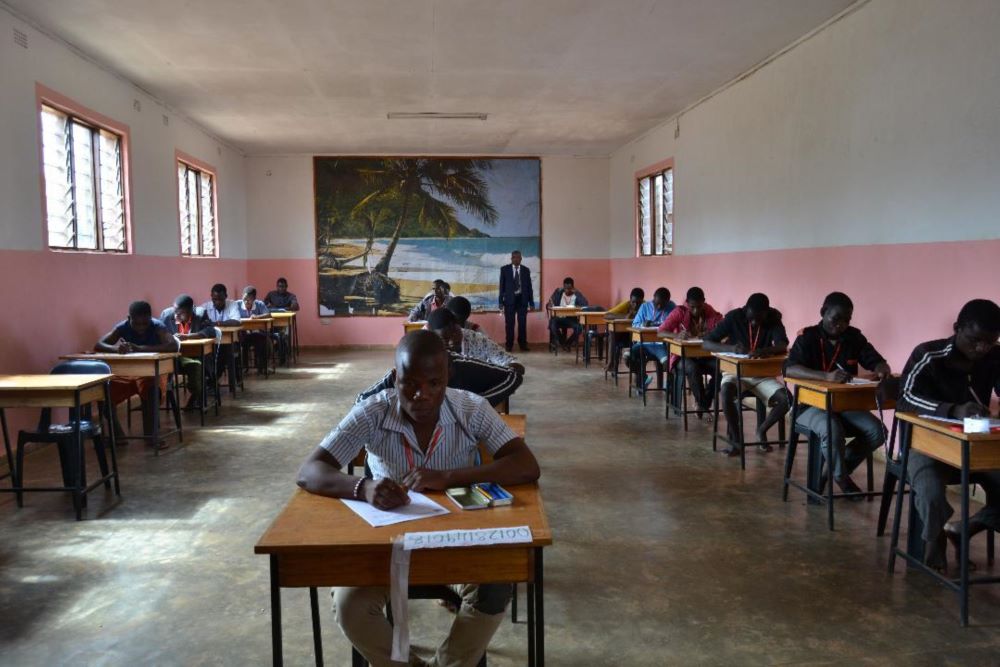 Rehabilitation efforts for young offenders at the Bvumbwe center include offering the inmates an opportunity to proceed with education. Sr. Anna Tommasi, assisted by locals, volunteers and staff, provides them with learning materials. Here, inmates are taking their national primary school examinations. (Courtesy of Anna Tommasi)

If you ask the locals of Lunzu, a periurban township in Blantyre, Malawi's second biggest city, whether they know a Catholic nun, the vast majority will mention Sister Anna. So popular is she that, whenever her motor vehicle breaks down in the area, people rush to look after it.

Sr. Anna Tommasi, of the Franciscan Auxiliary Lay Missionaries of the Immaculate Conception, has established herself with local people through her charitable works in early childhood development, promotion of access to secondary education for impoverished rural girls, and monthly visits to the country's penitentiary facilities. Through her organization, CCC Trust, she helps rehabilitate young offenders by providing them with skills training so that they are able to earn a living when they finish their sentences.

CCC stands for Chifundo, Chilungamo and Chitukuko, which in southern Malawi's vernacular Chewa, translates to Charity, Justice and Development. "The name is self-explanatory," Tommasi says.

Born in Verona, Italy, a year before the Second World War began, Tommasi joined the Franciscan Auxiliary in 1960 in Rome before being sent to Tanzania to teach women and girls home management skills. Having arrived from her homeland by ship, she spent a decade in Tanzania before being recalled to Italy, where she remained for the next 26 years. Twenty years ago, in December 2002, she arrived in Malawi and posted at Lunzu Parish under the Archdiocese of Blantyre. 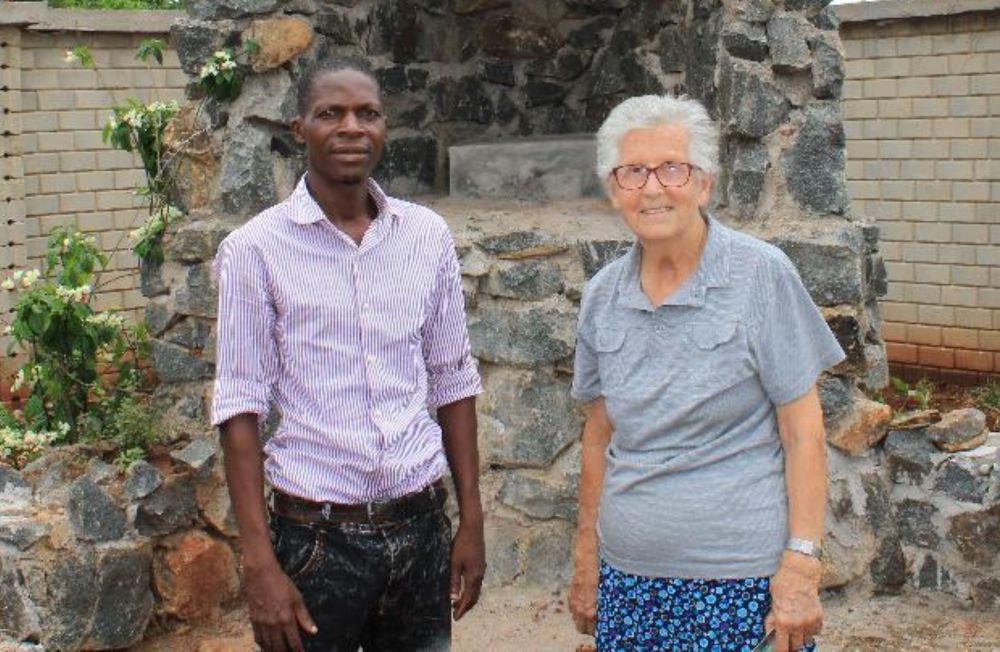 Sr. Anna Tommasi stands with Sam Ndecheta, the CCC Trust coordinator for early childhood development education. The trust in Blantyre, Malawi, works to reduce the hardships suffered by inmates in Malawi’s prisons where suspects can be held for years in crowded cells without a trial date. (Deogracious Benjamin Kalima)

Tommasi says one day she was asked to accompany Fr. Peter Kamtembe, who was the prison chaplain for Chichiri Prison in Blantyre (one of Malawi's largest prisons) on a visit there. She was very concerned with the plight of inmates at the facility.

"On my first visit to Chichiri Prison, I saw overcrowding of inmates resulting in the facility failing to provide adequate food for the inmates. This resulted in high cases of malnutrition. There was no separate room for the sick, which led to the spread of communicable diseases among inmates. This really touched me," she says. 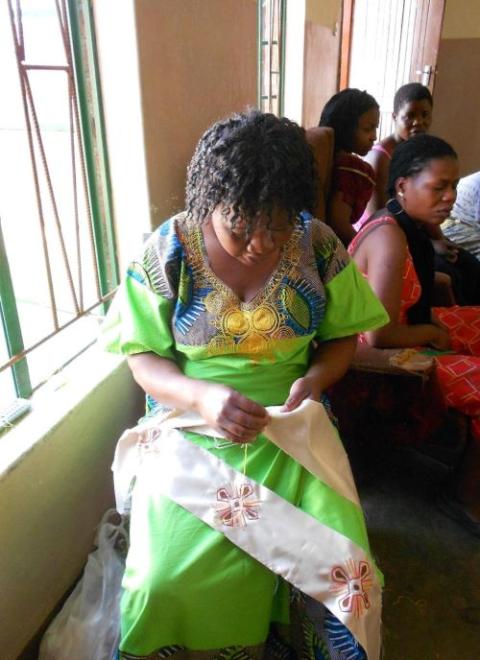 Sr. Anna Tommasi facilitates tailoring and embroidery lessons to female inmates at Chichiri Prison in Malawi so that, when they get out of prison, they will have the means to earn a living. (Courtesy of Anna Tommasi)

Tommasi says she started with female inmates at the facility, teaching them embroidery and tailoring, but she realized the inmates lacked a proper space within the prison to use as a workshop. With this in mind, she raised some money from her friends and supporters in Italy and facilitated the construction of a multipurpose building at the facility that was completed in 2004. Then she facilitated the construction of a sick bay at the facility after seeing that prisoners were being mixed with other inmates, leading to the spread of tuberculosis, scabies and cholera. A sick bay that could accommodate 15 patients was constructed in 2008 and, for the first time, sick inmates were fed a special diet instead of daily prison fare of thick porridge and boiled beans.

In 2010, Tommasi started working at Bvumbwe Young Offenders Rehabilitation Center, a facility 30 kilometers, or 19 miles, southwest of Blantyre, after she noted an increase in juvenile crime in Malawi. She offered to support young offenders who show a commitment to change their lives, pick up the pieces and move forward. The youths are supported with legal representation, bail application assistance and payment of tuition fees for secondary and tertiary education.

Desmond Malava is one such youth. The 22-year-old man says he was charged with killing his mother in 2016, accusing her of alcohol abuse and family neglect. Out of anger, Malava says, when he was 16 he kicked his mom and she lost consciousness, eventually dying. He was arrested and put into a juvenile center. From there, he got bail and was able to resume schooling. Malava says he approached Sister Anna one day when she visited and listened to his story.

Through CCC Trust, Tommasi was able to get bail for Malava in March 2017, and he returned to school to finish his secondary education in 2019 with good grades. That made him eligible for an education at DMI St. John The Baptist University in Mangochi, Malawi. The CCC Trust helped him enroll for a bachelor of commerce degree in accounting and finance and pay tuition and expenses. He is now in his second year.

"When I was arrested, I lost all hope about doing something tangible in life and at times contemplated ending my own life, however, when Sister Anna accepted to support me in my bail application and education, I saw my own resurrection. CC brings light and hope to the hopeless," Malava says. 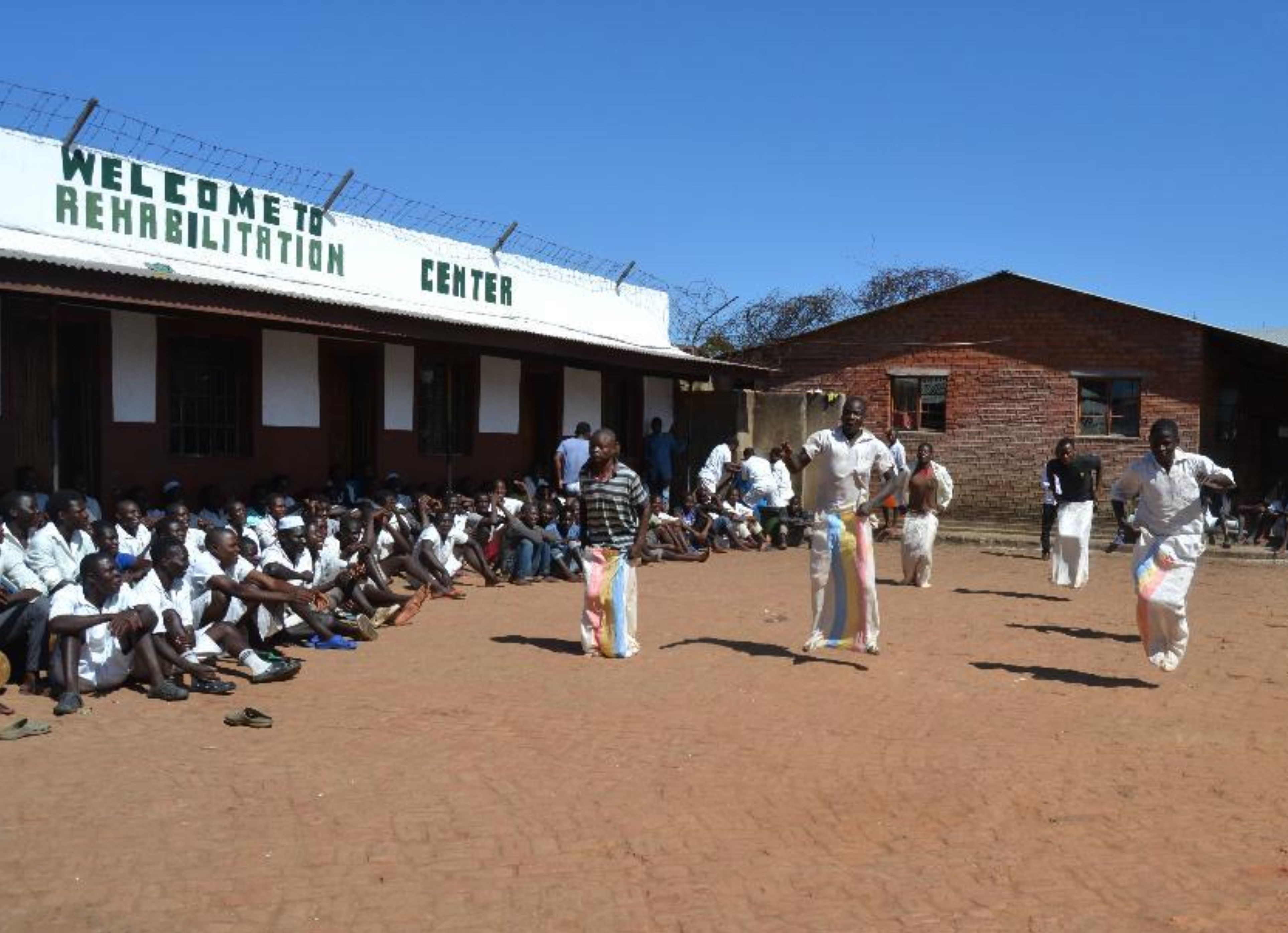 Offenders engage in a dancing session at Chichiri Prison in Malawi, facilitated by Sr. Anna Tommasi. Mental health initiatives are inadequate and chronically underfunded in Malawi’s prisons. Efforts to nourish the emotional health of inmates aim to reduce the chances of reoffending. (Courtesy of Anna Tommasi)

Malava says he gets all necessary support for his tertiary education, including accommodation, meals and upkeep allowance. He says he is determined to work hard so that he can graduate with high grades and eventually join the corporate world and help in developing Malawi. However, he bemoans the rejection by his blood relations.

"My family is hostile to me as they seem not to have forgiven me. They reject me. However, I hope one day they will be able to understand and forgive me," Desmond says.

He is also troubled about his case in the High Court of Malawi. He says his trial, which is near conclusion, has been postponed time and again. He wishes the case could have reached its end so that he can plan ahead, saying the uncertainty about his case makes him lose concentration on his studies.

"All I wish to have now is the completion of my trial at the High Court so that I can plan ahead," he says.

CCC Trust has 20 other young offenders who are back in school. Another is studying at Malawi University of Business and Applied Sciences, while four attend a teachers training college. 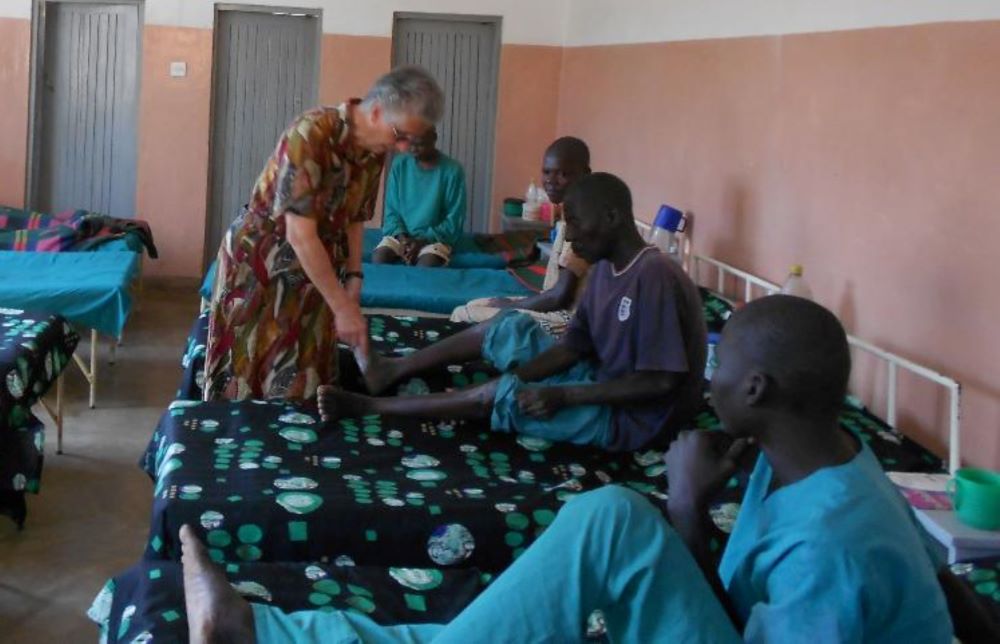 Sr. Anna Tommasi checks a patient in the sick bay at Chichiri Prison in Blantyre, Malawi. Malawi's prisons, known for their harsh conditions, do not house health facilities but set aside rooms to treat prisoners with minor illnesses. Sick inmates are mixed with others in cells and sleeping dormitories thereby increasing chances of further transmission of communicable diseases. Tommasi facilitated the construction of a multipurpose sick bay to isolate ill inmates at the facility. (Courtesy of Anna Tommasi)

Since 2021, Tommasi has facilitated camp court, a smaller judicial station that reviews small offenses and finalizes cases quickly at the Bvumbwe rehab center, resulting in acquittals or reductions of sentences for young offenders. She, however, bemoans the lack of legal representation to most inmates due to high levels of poverty among Malawians. She says paralegals often represent suspects in the magistrate court. She also thinks Malawi should adopt a parole system to decongest its prison facilities, most of which are carrying three times their capacities, having been constructed more than 40 years ago when the population was smaller.

"Having worked with inmates for many years now and seen firsthand their numerous problems, I strongly believe there is a need to have a parole system in the correctional system so that our prisons can be decongested," she says.

Now Tommasi is mentoring Sr. Martha Ngom, an indigenous Malawi nun, to take over the operations of CCC Trust when she retires.