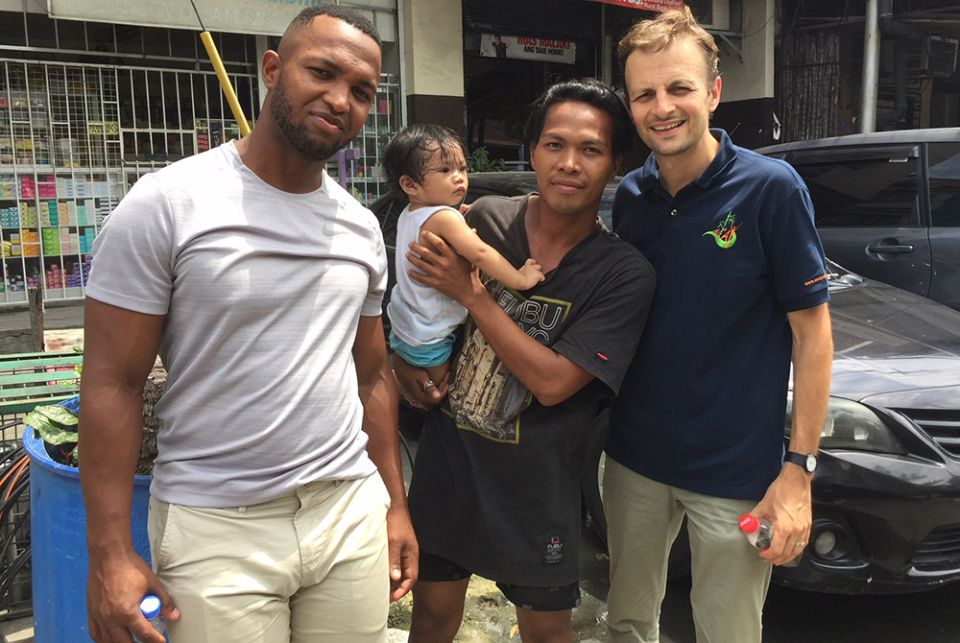 Paris — When Laurent Thorigné went to the Philippines to work for Association Compassion Asian Youth, or ACAY, a nongovernmental organization serving underage inmates, he initially did not know it had been set up by a French nun, Sr. Sophie Renoux, known as Sr. Sophie de Jésus.

"What struck me was how dynamic the organization was, how full of humanity," Thorigné said. "It was really inspiring. I could feel a lot of hope. The sisters were so full of energy, of attention. They cared so much about everyone: the detainees but also the volunteers, everyone. Their dedication to their work was very impressive."

ACAY programs — the School of Life for teen and young women and the Second Chance program for teen and young men — give young adult inmates a second chance after they come out of jail. Time spent behind bars is meant to become a useful time, when inmates can think of the choices they want to make for the rest of their lives.

ACAY and its programs were started by Sister Sophie, who founded the congregation of the Missionaries of Mary, a local new community in the Diocese of Novaliches in Manila, the Philippines, in 2007.

Sister Sophie was a member of the Community of the Beatitudes when she set up ACAY in 1997, two years after she went to the World Youth Day in the Philippines. Through its programs, ACAY has been changing the lives of hundreds of young people in the Philippines. In France, the Second Chance program started in 2014.

Second Chance relies on peer-to-peer interaction, testimonials from program alumni, videos and counseling sessions for offenders to recognize the patterns of behavior that got them into jail, and opportunities to change when they are released. Their commitment to the program is crucial, Thorigné said.

"Those who take part in our program are eager to turn the page of their dark past," he said. "It is impossible to do anything without their agreement."

Thorigné spent a summer in Manila in 2003 then a whole year with ACAY, whose work became the subject of his master's thesis in political science. After completing his studies, he decided to return to the Philippines to work for ACAY for two years. He stayed on for 10.

Related: Q & A with Sr. Sophie de Jésus, founder of programs to help teens in need

Every year, Sister Sophie went back to her hometown of Marseille to raise funds for ACAY, and he would return to France, too. Together, they gave presentations about the Second Chance program to French high school students as well as detainees. About 5,000 high school students and 150 young detainees have attended conferences about the work done by ACAY in the Philippines.

Videos showed life in jail in Manila and former detainees explaining why and how they decided to lead a more normal life, get vocational training and have a legal job. They inspire other youth on a peer-to-peer approach.

In 2010, a French magistrate dealing with underage delinquents heard about ACAY's work. She offered Sister Sophie and Thorigné a chance to discover the reality of the French judicial system for juvenile and young adult offenders.

In France, about 110,000 young people leave school every year at age 16 with no degree or qualifications. With a high rate of unemployment, they are at risk of getting involved in criminal activities.

There are alternatives to sending underage criminals to jail in France: Some are ordered to stay away from some places and/or some people; others may have to do hours of community service. Depending on the severity of the crime, young people can initially get suspended sentences. But they are imprisoned sometimes after multiple crimes.

Then, the situation can get worse. 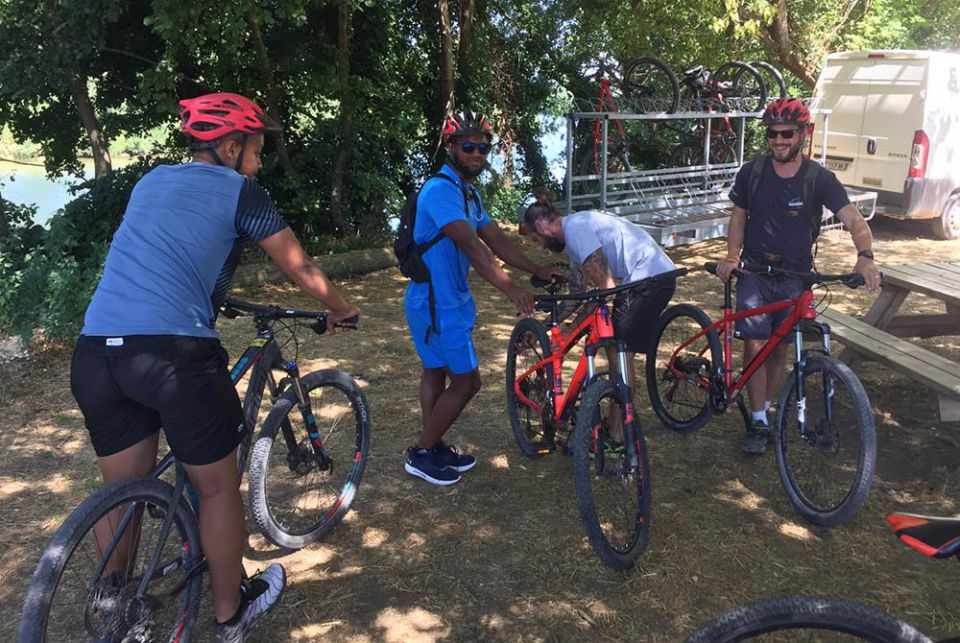 The ACAY team in France participates in a teambuilding activity. The ACAY Second Chance program began to be replicated in France in 2014, adapted for the French youth detention system. (Courtesy of ACAY France)

ACAY's approach believes that time in detention can be a useful period where the youth can experience the turning point of changing their life. ACAY workers offer a chance to these young offenders to figure out the reasons that led them to commit crimes, suggest they choose to lead a normal life, find their strong points and talents, and teach them how they can get a real job or go back to school.

This program has worked well in the Philippines, and when Thorigné decided to go back home in 2014, the French management of the Penitentiary Establishment for Minors in Marseille offered him and Sister Sophie to set up a similar program in Marseille, even though the context is different.

Marseille, on the Mediterranean Sea, is France's second biggest city with a very diverse population and is an important port of entry for immigration. It also holds one of the six jails in the country reserved for minors, where people aged 13 to 18 are detained, most of them before their trial.

French authorities try to do as much prevention as possible during pretrial detention. Underage offenders have to see regularly specially trained educators, psychologists and teachers who prepare their reinsertion into society. This is when ACAY workers intervene.

School is compulsory in France for everybody until age 16. Detainees attend classes in jail. Like in any other school in France, Wednesday afternoon is free of classes, and there is a two-week break every seven weeks. So every Wednesday, volunteers working for ACAY come to the detention center to meet these young men, mostly on a one-on-one basis.

During the two-week holiday, inmates can join a five-day training session. Through videos and recorded testimonials from former Filipino inmates, this session aims at raising awareness about the context of life of juvenile delinquents in other countries and the different stages of recovery.

"Detainees are interested to discover the experiences Filipino youths are ready to share. We wait for them to express a will to do something with their life once they are out of jail," Thorigné said. "The initiative has to come from them. They are at the center of our work. If we do not put them in the center of our action, it is useless."

Three times a year, in April, August and October, detainees met former Filipinos who gave testimonials on their experience.

"Watching a video and hearing a former Filipino involved in illegal or criminal activities explain why he decided to change his life can make them decide to break with their criminal past, too," Thorigné said. "Detainees are impressed by these guys they could identify with and are ready to listen to them." 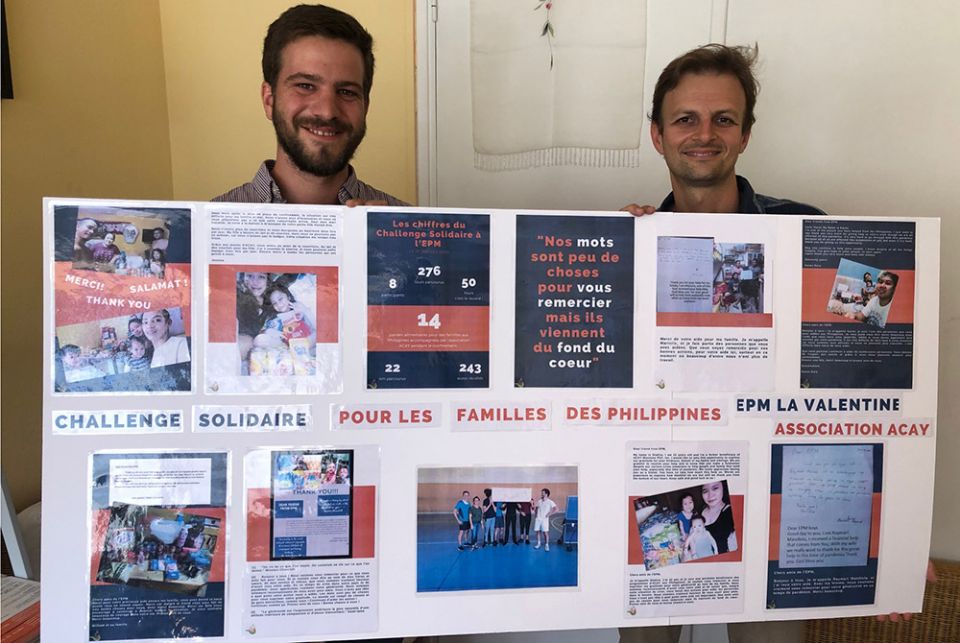 Hubert de la Touche, left, youth accompaniment and training officer for ACAY France, and Laurent Thorigné, right, hold a poster that shows messages from Filipinos thanking French participants in a charity run in May. The run raised money for those in the Philippines affected by the coronavirus pandemic restrictions, where thousands have been displaced from jobs. Volunteers as well as detainees registered for the events, held at home for the volunteers, in jail for the detainees. Each time a 25-lap run was completed in the jail yard or at home, a basket of food was paid for to be sent to the Philippines. (Courtesy of ACAY France)

Then came the coronavirus pandemic. A very strict lockdown was imposed form mid-March to mid-May, forbidding everybody to go beyond a 1-kilometer (0.62 mile) radius from home. Schools were closed. People jailed experienced the worst kind of detention — families could not visit, and no volunteers were allowed to see them. ACAY had to put a halt to its activities in jail.

After some months, life resumed. But the virus was not gone, and a new period of confinement was imposed from Oct. 31 to Dec. 15. This time, it was not as strict: Schools were open, as well as activities for children under 18. ACAY was one of the few groups working in jail to be allowed to resume their activities with the detainees.

Idrisse, who completed the Second Chance program in France, gave a testimony to detainees in Marseille during this second lockdown, since Philippines alumni couldn't travel to give witness as they had in previous years. Traveling was curtailed, so Sister Sophie had to stay in France a few extra months and went back to Manila in mid-February.

The first alumnus of the ACAY France program, Idrisse went to the Philippines in 2019 to tell of his experience to ACAY participants in Manila. He had been in jail several times before he turned 18. He met with ACAY volunteers when he was behind bars and understood it was possible to start a new life. Now 24, he is a construction worker in Marseille.

He said he was shocked to see the awful state of Filipino jails. He met with detainees, talked to them about his own experience — not very different from theirs, he said — played soccer with them and realized anyone can change.

"These youths were listening to me. It gave me more confidence and made me feel like doing more for them," Idrisse said.

Once they are out of jail, former detainees are still accompanied by ACAY volunteers. They can get help from sponsors of ACAY. One of them, the media group M6, has a foundation dedicated to rehabilitation of former convicts. This foundation is currently providing ACAY with funds for eight former detainees who want to earn their driver's licenses, a long and costly procedure in France. This is often the first exam these youth take and pass. It is a first step into the world of legality.

Twelve out of the 15 former detainees accompanied by ACAY since 2016 are now training for a job or learning a new skill like driving. This is to avoid a relapse: According to a 2018 French Senate report on rehabilitation of young offenders, within five years, 75% of underage delinquents go back to jail, according to the Justice Ministry.

Are young people very different in France and in the Philippines?

"Generally, youth in the Philippines don't have the same access to different forms of support as youth in France," Thorigné said. "In France, it is easier to take these for granted while Filipinos have difficulties meeting their basic needs. Young people in France do not always see the possibility of training in a new job as a real opportunity, because it is here for everybody, education is free, where Filipinos see going to school as a chance."

Idrisse's experience with the Second Chance program in France and seeing how ACAY operates in the Philippines left a lasting impression.

"With ACAY I have understood how, through a very humanitarian approach, any youth could start again and have a different life."