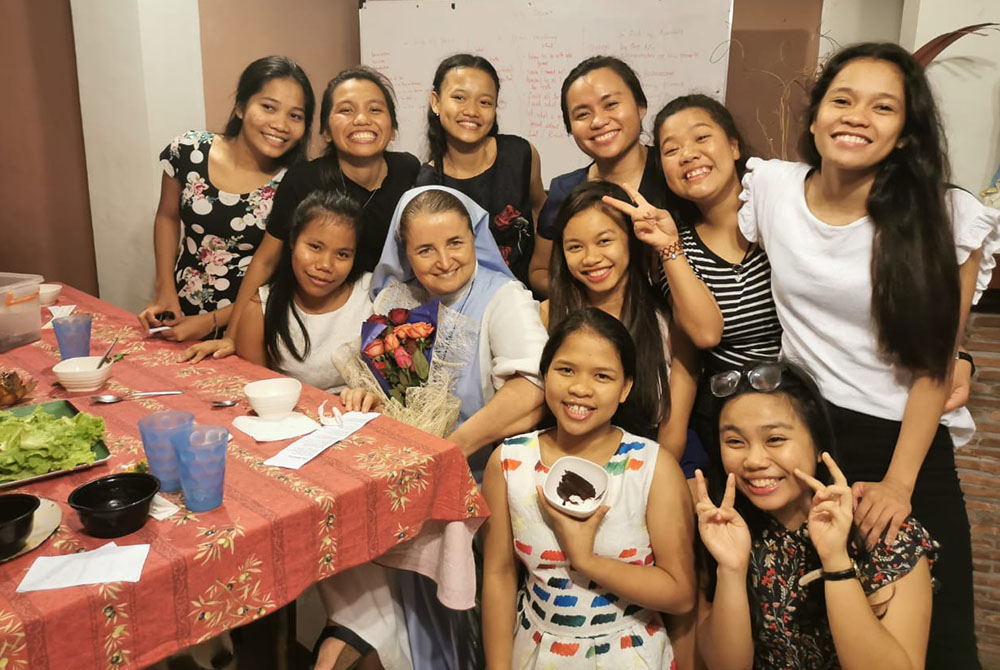 Sr. Sophie de Jésus of the Missionaries of Mary celebrates the feast of the Sacred Heart in June 2020 with some of girls at the School of Life, a residential program that she founded in the Philippines in 2000 for girls ages 14 to 21 to learn life skills and overcome abuse and other issues. (Courtesy of ACAY)

To this day, Sr. Sophie Renoux can hear the seaman's voice in her ears.

She was with a friend on a tour of New Caledonia, a French territory in the South Pacific, in her first years as a missionary. As she wrote in her 2015 book, Defying Chaos: " 'Sophie, in the face of a raging sea,' " he said, " 'never base yourself on what you feel at sea (it should be noted that I cowered at every single wave!!) but stand at the bow of the boat and watch, assess and evaluate the degree of danger.' "

"That day, I got up and stood beside him facing the impressive waves of this Caledonian sea in stormy weather," she wrote. "By his side, and in this face to face with the breaking waves, I lost the fear of insecurity ... on the sea and in the air. And on land, I learned to 'face' every difficult situation before me."

Sister Sophie, today known as Sr. Sophie de Jésus, has faced many difficult situations throughout the formation of Association Compassion Asian Youth, or ACAY, an organization she founded more than 20 years ago in the Philippines to give troubled teens and young adults a chance to change their lives. The mission oversees two programs: School of Life, a residential program for teen girls, and the Second Chance program for teen and young men in detention centers or jails.

Born in Grenoble, France, Sister Sophie joined the Community of the Beatitudes when she was 19. While on mission in New Caledonia, she accompanied a youth group to the 1995 World Youth Day in Manila.

"I felt the call within me to serve young people over there," she said.

She moved to the Philippines two years later. She learned while there were many programs focusing on children, there were few to help troubled teens and young adults. That led to the founding of ACAY in 1997. The School of Life began in 2000, and the Second Chance program started two years later. In 2014, a Second Chance program began in Marseille, France.

In 2007, she founded the Missionaries of Mary, a community linked to the Diocese of Novaliches, Quezon City, with three other sisters serving with her at ACAY. The local connection and context better served the mission, she said.

In 2013, Sister Sophie was named a chevalier (knight) in France's National Order of Merit, and in 2015, she received the Legion of Honor at the request of the ambassador of France in the Philippines. These two medals honored ACAY's programs and the fact that a program started in the Philippines was beginning to take root in France. They were also recognition of ACAY's efforts to assist the people of Tacloban in the southern Philippines after a 2013 super typhoon killed more than 8,000 people. There, ACAY provided post-traumatic counseling and helped rebuild the community through microfinance, vocational training and other programs. 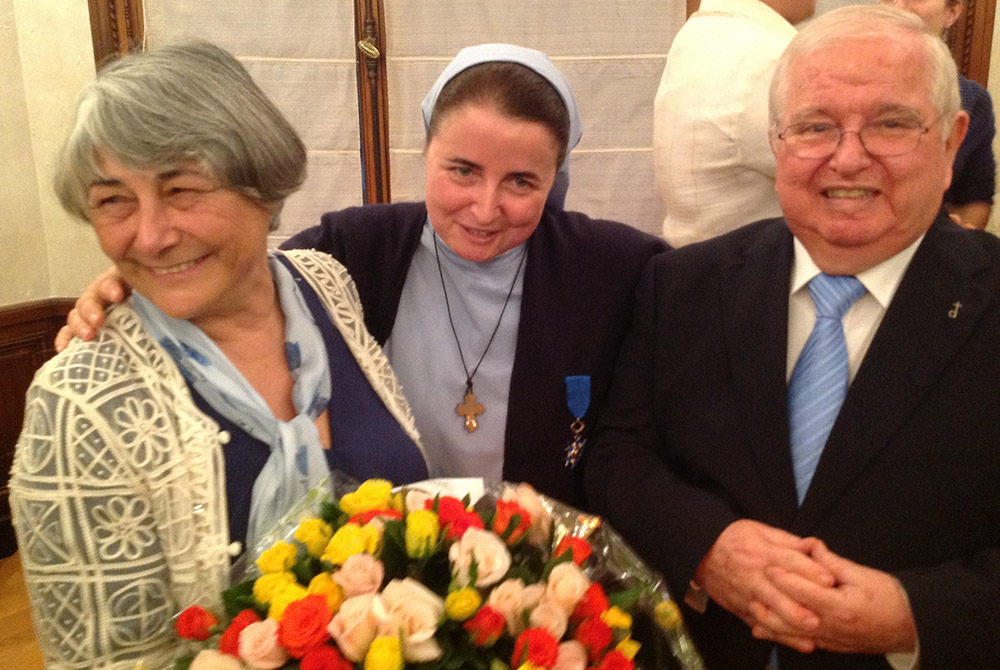 GSR: What were the greatest challenges starting the School of Life and Second Chance programs?

Sister Sophie: Challenges are numerous when you let the Lord lead you in unknown ways.

In our program concepts, everything is based on the trustful partnership between the youth and the ACAY team. The challenge is for the youth to learn to overcome frustrations and delayed gratification, to choose the small, winning steps before tasting any maturity and inner freedom facing the recovery from the past trauma. To reach there, the journey takes time.

Freedom of the youth to move forward was the first challenge we met: freedom to open up on the traumatic event, to be aware on the unsafe coping mechanisms developed along the years, freedom to choose another way, freedom to overcome every single daily life crisis.

The battle was inside, with oneself. Every change starts within. Grit became one of the main traits of the ACAY personality of those going through the program. ACAY teamwork is crucial during these times to win the trust of the youth facing ups and downs.

Keeping the agility of the team was another challenge. Allocating time to revisit experiences on the ground; extracting the educative principles and strategies; evaluating the impact of our actions; addressing long-term goals more than short-term ones; and listening to what events and youth tell us about themselves have been fundamental.

We are called to be at the crossroads of various fields: social work, psychology and spirituality, but also the business world. Some of us are coached by a CEO of a big company. All our teams are trained in Lean Six Sigma management. Integrating all of these approaches was one of the main challenges, as usually the tendency is unfortunately to slice services. Integrated, the programs become high-impact interventions.

Another challenge was the partnership with the government institutions — not to be against them despite some shortcomings, but betting on long-term partnerships to impact their way of working with youth through the youth themselves. Youth entrusted to ACAY trainings have most of the time become leaders in the youth juvenile justice system and made the system evolve from within. 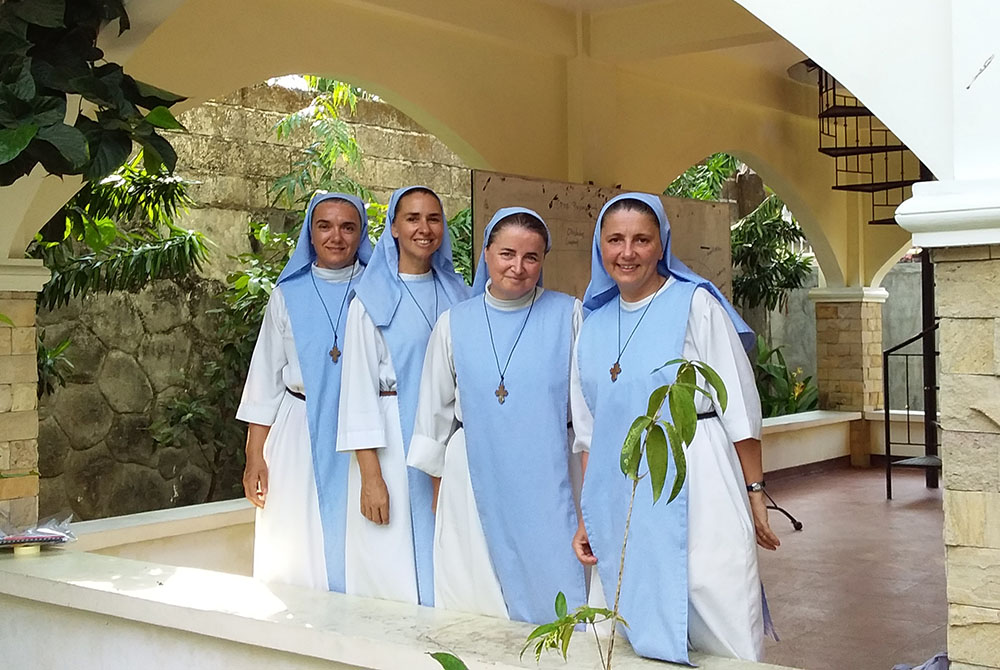 From left: Sr. Laetitia Gorczyca, Sr. Rachel Myriam Luxford, Sr. Sophie de Jésus and Sr. Edith Fabian, the four Missionaries of Mary sisters who are the heart of ACAY's School of Life and Second Chance programs, in front of their house in Balanga, the Philippines, in May 2019. (Courtesy of Sr. Sophie de Jésus)

What have you learned about adapting the Second Chance program for the differences in culture and detention/prison systems in France?

The programs in both countries have supported each other. However, we definitely had to adjust to the French youth, to the French social and judiciary system. What was fundamental was to respect all present governmental educative institutions and find our own way that will not overlap their existing interventions.

Training on self-awareness, opening their horizons through discovering the context of the youth in the Philippines and an exchange of letters between detained French youth and Filipino ones, organizing testimonies of our Filipino youth in France: All of this has helped address the French problematics but indirectly.

We never talked to French youth about their problems in Marseille. We talked of the Philippines, but most of the time, French youth felt concerned and touched in their own experiences. It liberated their words, and they could express for the first time their own painful experiences. This strategy of "passing from the other to reach my own self" has been impactful for the past six years.

Today, after years of building this trust, several youths have left delinquency. One came to the Philippines to give his testimony. France now walks on its own, but we share our experiences and best practices. 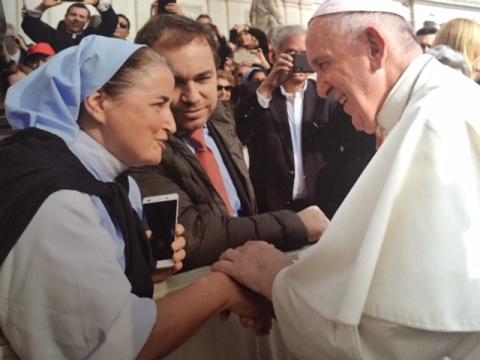 Sr. Sophie de Jésus meets Pope Francis in October 2019 along with representatives of the World Association of Children's Friends, or AMADE, an organization committed to the protection of development of children worldwide. AMADE, led by Princess Caroline of Monaco, is the principal partner of ACAY, which Sister Sophie founded in 1997 in the Philippines to help troubled teens and young adults. (Courtesy of Sr. Sophie de Jésus)

What have been the biggest challenges posed by the coronavirus pandemic and quarantine restrictions, and how are you adapting the programs?

Like everyone: to secure our youth, our staff and our places. Most of our teams wanted to still be at work with us, so we created ACAY secure homes where everyone committed not to go out of the ACAY places and respect the same level of measures to protect each other.

A few among us were allowed to go to the market and shop on behalf of the others. We had the great chance to have a friend who ordered online donations of food. Among the normal shock of the first months, these expressions of friendship were such a gift.

Being limited in our missionary interventions, we had to recreate our work. This was such an opportunity to go back to our concept, redesign it and see exactly what we are called to.

Young people now detained in the Philippines, the majority of them are there because of substance use and selling. Their inner profile is not what we had known for 20 years. They consider themselves most of the time as victimless. They believe they did not do any crime; they just did business or consumed for themselves some forbidden herbs. They are used to strategizing their words and their methods. They are street-smart; they know so many tricks to avoid being blamed.

We had been used to leading youth who really and deeply repented of the offenses they had committed. We have to redesign and integrate these new traits into our programs. This pandemic has offered us a pause and an opportunity to reconsider and evaluate what we have done until now and how to move forward.

Do you see any changes becoming permanent aspects of the programs even after the coronavirus pandemic is brought under control?

We also welcomed for the first time girls who were coming from detention into our Second Chance program, as it might be more adapted to some of the profiles than the School of Life program, which is residential.

One of the challenges of this pandemic will be to find job opportunities for our youth but also for their parents. Our priorities will be to lead our youth to know themselves but also be ready in an intensive way for the professional world. Most of the parents come from deprived areas, and their jobs are inconsistent. The pandemic has destroyed so many small jobs, as people do not go out anymore.

You started the ACAY Innovation Hub, in which a small group of staff share and capitalize on the learnings and innovations of ACAY to prepare for seeding the programs to other countries. How far along are you with this, and what aspects can be replicated?

One of the mottos in the ACAY journey is: "Where the dragon is, there is the treasure." It is true in our past experiences and inner life, in our spiritual life but also in managing unexpected events. This pandemic has surely led to changes and challenges but offered us the treasure of time to pause in actions and go deep on redesigning what we are offering to our youth.

The ACAY Innovation Hub holds the responsibility that our best practices are evaluated, documented and capitalized for others.

This has been my dream to launch ACAY in this seeding developmental step. We already had an experience in an African country as a trial experience. To sharpen this, the Lord sent us just before the pandemic the CEO of a big company who suddenly felt in his heart the desire to coach us into this vision. We named the project "Metamorphosis," as it talks about a transformative journey within ACAY. We are working on it now.

This is a beautiful and fascinating moment to revisit, coached by a professional in development, the experience of 20 years of the School of Life program and preparing the future. Everything comes at the right time. When the time will arrive, in God's time, we will be ready to help.

Coming March 18: How the ACAY program from the Philippines is being used in France.