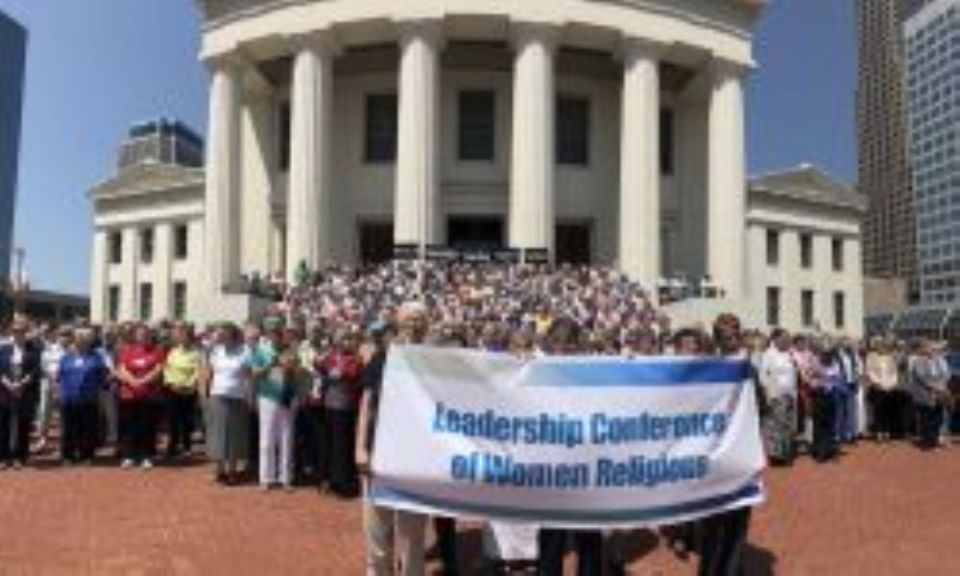 About 800 sister leaders from the Leadership Conference of Women Religious gather Aug. 10, 2018, on the steps of the Old Courthouse in downtown St. Louis after reaffirming a 2016 resolution against racism as part of their annual assembly. This courthouse was the site of the first two trials of the Dred Scott case. (GSR file photo)

When thinking about the meaning-making role that Catholic sisters so often like to ponder, the image of a high diver keeps coming back to Sr. Carol Zinn: Though jumping off a board with no spring, the diver still takes an extra leap at the top in an attempt to execute a crisper dive without so much as a ripple, reaching the depths of the pool.

The "mystical journey" before Catholic sisters today "is about that deeper dive," said Zinn, a Sister of St. Joseph of Philadelphia. “Not to go down there and stay there, but to emerge from this space of deeper meaning-making, to be of service to the life of the world … to be on the edge, to be manifestations of hope and joy.”

Contemplating the ever-evolving role of Catholic sisters is among the priorities of congregational leaders today. Many communities are considering combining with others, adopting new governing structures or even the process of completion and selling property because of aging demographics and other needs.

With that context, the Leadership Conference of Women Religious — which represents 80% of Catholic sisters in the United States — will host its general assembly under the theme "Mystical Wisdom: Following Spirit's Beckoning." 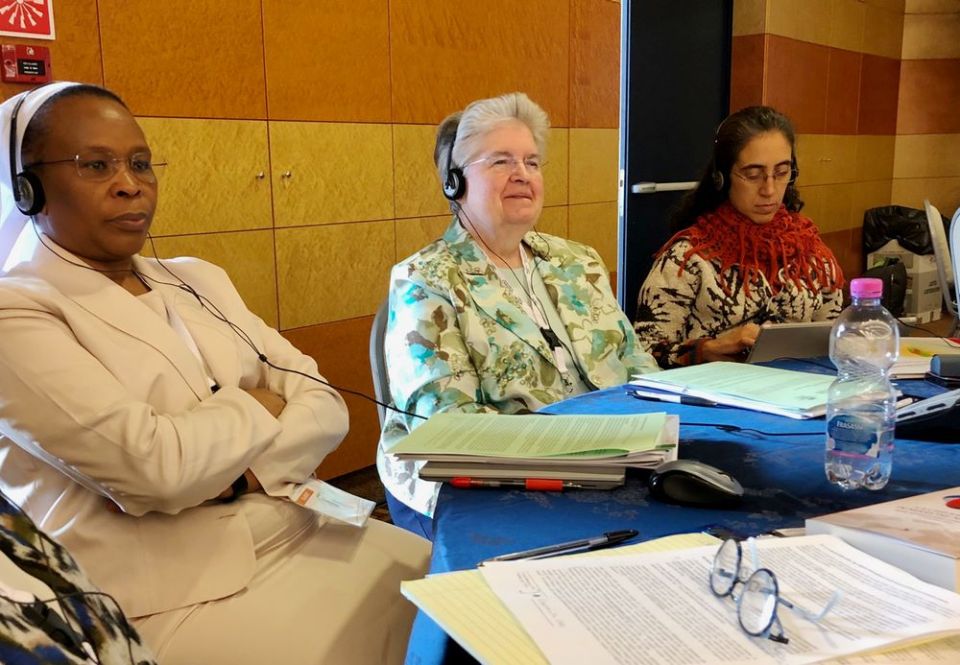 LCWR executive director Sr. Carol Zinn says the "mystical journey" before Catholic sisters today is a deep dive into the role of women religious, "to be of service to the life of the world … to be on the edge, to be manifestations of hope and joy.” Zinn, center, is shown during the International Union of Superiors General plenary in May 2019 in Rome. (Courtesy of LCWR)

The four-day gathering will unite congregational leaders in St. Louis, Missouri, Aug. 9-12, for the first in-person general assembly since the pandemic closed events in March 2020.

"Data is speaking one story, but where is the deeper call?" said Sr. Jane Herb, president of LCWR and a member of the Sisters, Servants of the Immaculate Heart of Mary. (Herb will transition to past president after the assembly's presidential elections.)

"That's what the 'mystical wisdom' says to me: Where is the call for religious at this moment in time?" she said.

This assembly, Zinn said, is going to be different from previous assemblies "right out of the gate," and not just because the format has been tweaked to include more spiritual conversations in lieu of keynotes. Sisters have also been changed by the myriad of social and political issues that have touched the country since LCWR last gathered in person in 2019.

"People are going to walk into that ballroom at St. Louis very, very different people than in Scottsdale, Arizona," she said, and different even from the virtual assembly last year. "We're trying to recognize that this is not just more of the same. This is a deeper journey to talk about the realm of transformation." 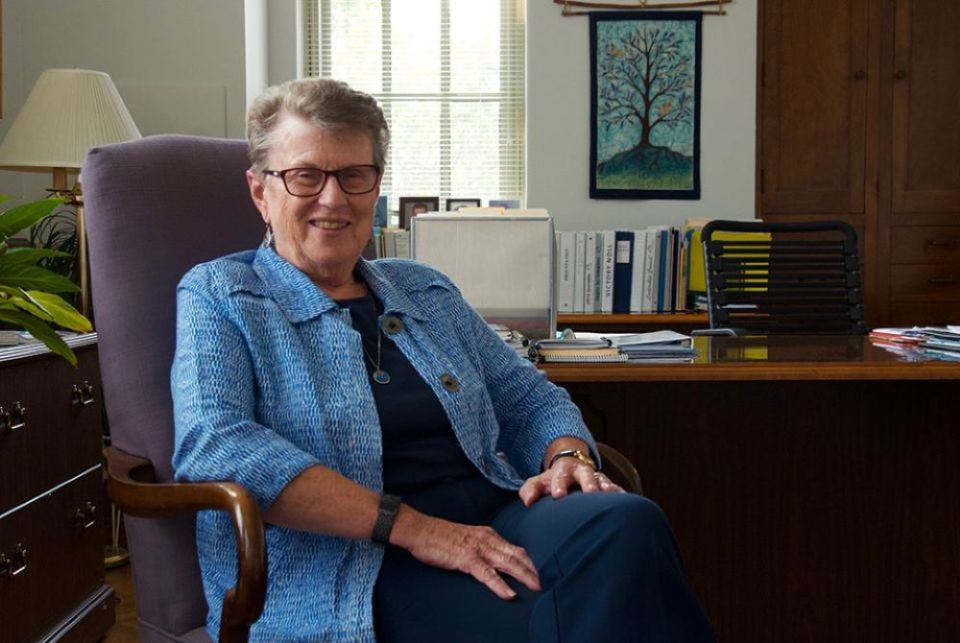 Sr. Jane Herb sits in her office July 19, 2021, at the Sisters, Servants of the Immaculate Heart of Mary motherhouse in Monroe, Michigan. Herb will complete her year as president of the Leadership Conference of Women Religious after elections during the general assembly conference Aug. 9-12. (GSR photo/Dan Stockman)

The task of meaning-making ranges from the universal to the personal, she said: to contemplate what's going on in the world, in religious life, in the country, in the church, in one's congregation, and in oneself — and how Catholic sisters can respond and be in relationship at each level.

"While at face value, it might appear to be, 'Oh, God, they're still talking about wisdom and mysticism and contemplation and so forth' — well, yes, we are, because that is the role of religious life, to hold that kind of space in service of the church for the life of the world," Zinn said.

Throughout this past year, sisters have been meeting for an initiative called the "Emerging Future of Religious Life," to discuss how their institutions should consider restructuring. (Three of the five meetings have already happened.) The themes from that initiative, LCWR leaders say, will be an underlying current throughout the assembly and the focus of a lengthy session Aug. 11.

'Whatever we've done in the past, those are not the structures for the future.'
—Sr. Carol Zinn

Sharing these conversations, she added, will be a chance to "encourage transformational thinking around the future" — not just of their individual congregations, but of religious life as a whole.

"We wanted to offer our members something that would be inspirational, that would help [them] look at the deeper meaning of what's happening today and how to ground themselves, so that they can make some of these hard decisions" and lead their communities through the changes, said Annmarie Sanders of the Sisters, Servants of the Immaculate Heart of Mary, and LCWR's associate director for communications.

Helping members tap into the "spiritual resources" within them, Sanders said, will be one approach, with Sr. Constance Fitzgerald and M. Shawn Copeland guiding participants through that internal work. Fitzgerald, a Baltimore Carmelite, is a scholar whose work on contemplative engagement inspired LCWR to utilize the practice in its annual assemblies, while Copeland is a theologian known for her work in theological anthropology and political theology. 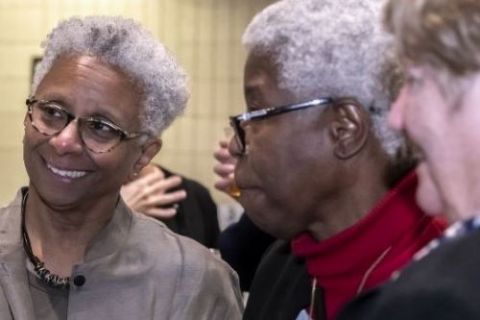 M. Shawn Copeland, left, speaks to guests during an April 26, 2019, conference Boston College held to honor her career and scholarly accomplishments. The theologian, who retired that year from the college's Theology Department, will speak at the upcoming LCWR general assembly meeting. (Boston College/Lee Pellegrini)

Rather than delivering keynote presentations, Fitzgerald and Copeland will model how to have a "spiritual conversation" that sorts through the "matters that are super deep within us that we don't really speak about," Sanders said. Those questions might include: What does it take to live a contemplative life? How do they overcome some of the obstacles in themselves to stay faithful to that call? What traditions do they draw from that helps keep that commitment alive within themselves?

"This kind of contemplative approach [is] really the foundation of our lives that we don't always take the time to reflect on a little bit more, the theological, spiritual, contemplative dimensions of our lives," she said.

The driving question behind this assembly, Sanders said, is how women religious contribute to the “transformation of the world," going beyond their ministries. "We all came to religious life for something much deeper than that, so it’s a return to looking at this deeper call that we all responded to." 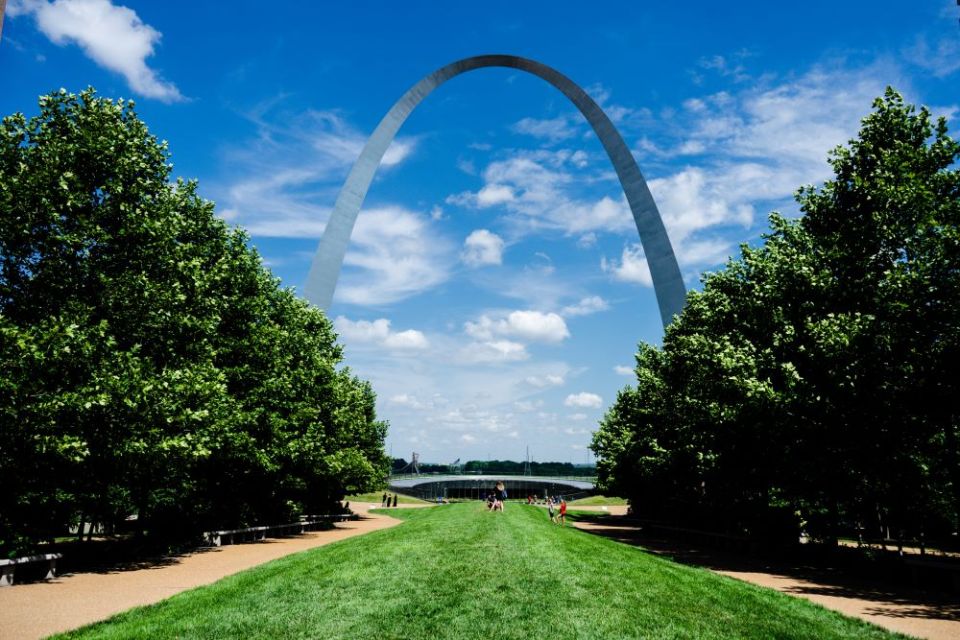 The Leadership Conference of Women Religious regions have voted to reaffirm the conference's 2019-2022 resolution that focuses on the intersection and underlying causes of racism, migration and the climate crisis, renewing the resolution for three more years. General assembly participants will hold a symbolic action for justice near the St. Louis Arch on Aug. 12. (Unsplash/Chris Hardy)

Herb said she hopes this assembly will prove to be more diverse, "culturally, racially and age-wise," and that the panelist conversations will demonstrate that while "broadening our perspective as we reflect on our future.

Inspired by Pope Francis' call for a "synodal journey," attendees will have opportunities to learn from members of different cultures, generations and Catholic traditions, Zinn said, "to engage in the diversity of each one’s journey to the Holy Spirit, and how we can share that."

"We’re trying to build the movement from the 'I' to the 'we,' " she said. Members have been asked to bring an item symbolic of wisdom for them that they will gift to another sister so that everyone takes home “a sense of collective wisdom.”

LCWR regions have voted to reaffirm the conference’s 2019-2022 resolution that focuses on the intersection and underlying causes of racism, migration and the climate crisis, renewing the resolution for another three years.

Following a symbolic action for justice near the St. Louis Arch on Aug. 12, the conference will present its Outstanding Leadership Awards: Notre Dame de Namur Sr. Patricia Chappell, the 2020 recipient and former executive director of PAX Christi USA who was unable to be honored in person, and this year's awardee, Loreto Sr. Patricia Murray, executive secretary of the International Union of Superiors General.

LCWR leaders said that, ultimately, they hope members go home energized "knowing that the road ahead is not going to get easier," Zinn said.

"We are in the world, in the country, in the church and in this evolutionary moment of religious life itself — we are in it together,” Zinn said, adding that silos around institutions, charisms and approach to ministries are breaking down, heightening the sense that whatever happens to one institute happens to all.

"Nobody ever envisioned that we would be living in what we're living in at this moment in time, whether it's in religious life or beyond," she continued. "Whatever we've done in the past, those are not the structures for the future. But our leadership is a gift and the challenges we face are really blessings."