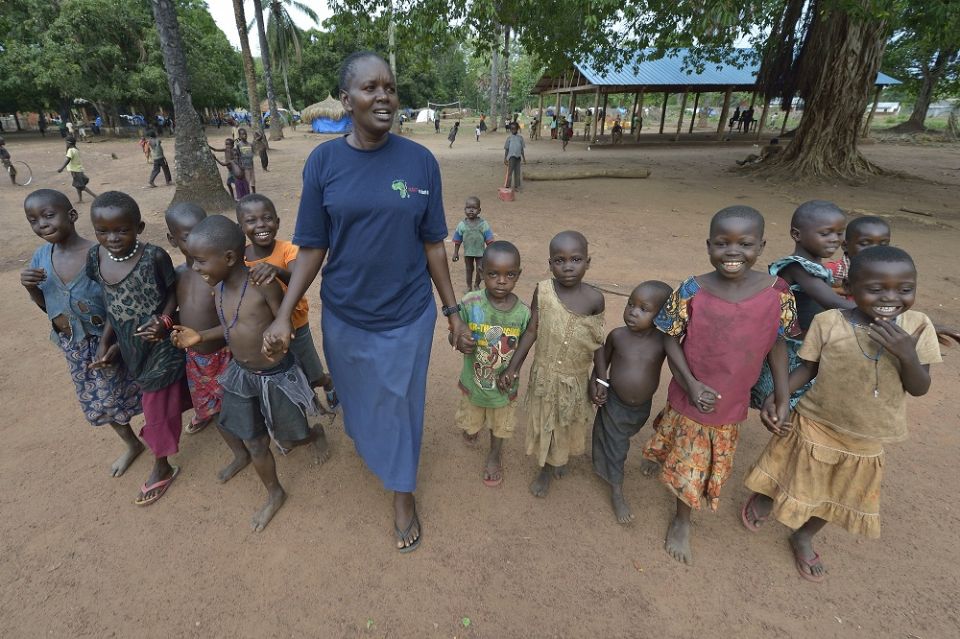 Sr. Josephine Murigi, a member of Our Lady of the Missions and Solidarity with South Sudan, walks with children in a camp for more than 5,000 displaced people in Riimenze in June 2017. Families were displaced in late 2016 and early 2017 as fighting between government soldiers and rebels escalated in South Sudan. (CNS/Paul Jeffrey)

New York — On the eve of the 11th anniversary of South Sudan's independence, a new book traces the history of Solidarity with South Sudan, noting that the collaborative 14-year-old ministry formed and run by female and male religious has been a model in humanitarian efforts across congregational lines.

Sr. Patricia Murray writes in the introduction for Collaborative Mission in South Sudan: Towards a New Paradigm that those involved with Solidarity have made a "communal journey" that shows "how to be a synodal Church, journeying together towards new horizons."

Murray, executive secretary of the International Union of Superiors General and a member of the Institute of the Blessed Virgin Mary, also known as the Loreto Sisters, was Solidarity's first executive director.

She writes that Solidarity has been an early example of Pope Francis' call for a synodal process "to walk together, listening to the Holy Spirit and to each [church] member, since all the baptized have an instinctive ability to discern the new ways that the Lord is revealing to the Church."

"This was precisely what we experienced as we journeyed together in South Sudan," Murray writes of Solidarity, formed by UISG and its male counterpart, the Union of Superiors General, following a request by the Sudan Catholic Bishops' Conference.

The book itself is one example of collaboration: It does not have a single author, instead relying on authorship by current and past Solidarity staff.

The 279-page book, published this year by EOS in Germany, does not shirk from describing the challenges the ministry has faced, acknowledging both the difficult situation in South Sudan and the efforts to form a workable, collaborative ministry made up of different congregations.

"The simple fact that no one congregation owns the work underpinned everything," the book notes.

Collaborative Mission states that underneath that dynamic were the sheer challenges of the country. South Sudan, with a population of 11.4 million, has one of the worst literacy rates in the world — 27% — and the world's fifth-highest maternal mortality rate, 789 per 100,000 births.

But the needs in a new country with a predominantly Christian and indigenous African religious tradition were enough to warrant a new model in which congregations collaborated on projects that included the training of health care professionals and teachers and the development of sustainable farming practices. (South Sudan achieved independence from predominantly Muslim Sudan on July 9, 2011.)

"Hopefully, we're training people to assist in the development of institutional infrastructure of the country," Mumaw, a member of the Sisters, Servants of the Immaculate Heart of Mary of Monroe, Michigan, said in an interview with Global Sisters Report.

The book describes how the early days of the initiative required patience and hard work. Notable contributors included Murray; her successor, De La Salle Br. Bill Firman; and the late Sr. Cathy Arata, a School Sister of Notre Dame and an early Solidarity missioner who Mumaw said was called "the walking nun" for her unflagging energy and commitment to working alongside the people of South Sudan.

The hard work has paid off. The book notes that one of the most durable successes of Solidarity has been in the training of health professionals at the Catholic Health Training Institute in Wau in northwestern South Sudan. 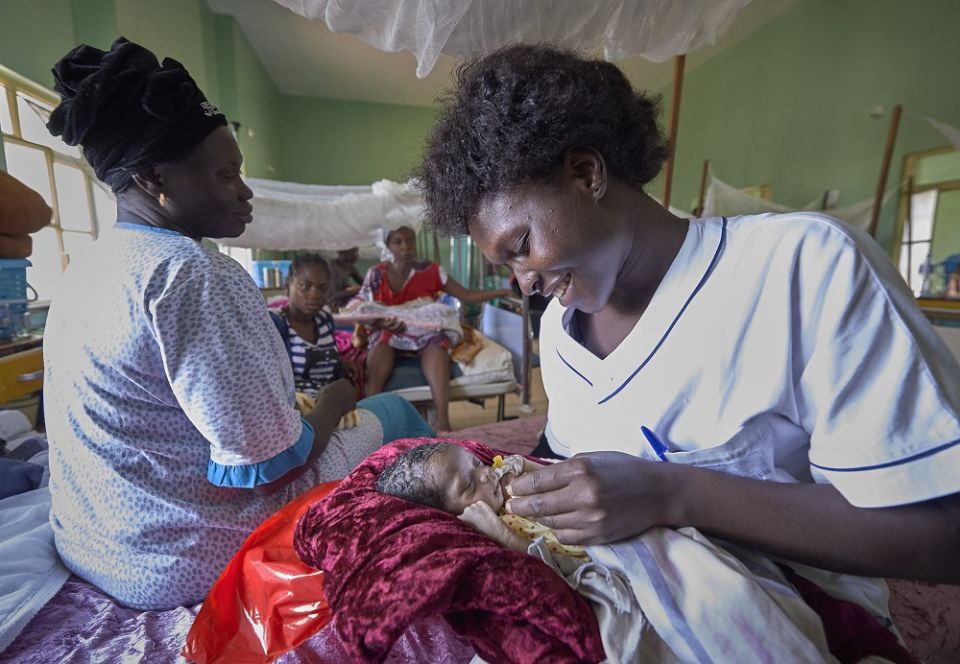 Nurse Annet Kojo feeds a 4-day-old baby girl in the maternity ward of the St. Daniel Comboni Catholic Hospital in Wau, South Sudan, on April 16, 2018. Kojo is a 2017 graduate of the Catholic Health Training Institute in Wau, which is sponsored by Solidarity with South Sudan. (CNS/Paul Jeffrey)

As of 2021, the book says, 227 people have graduated from the center — 154 nurses and 73 midwives — one-third of them women. In all, nearly a quarter of all nurses certified in South Sudan have been trained at the center, as has almost 30% of the country's certified midwives. Eighty-three percent of the center's graduates are currently employed.

However, this year has brought additional and grave challenges to South Sudan: Displacement caused by the ongoing civil war continues, as do drought and flooding throughout the country.

And last month, the United Nations' World Food Program said it had to suspend food assistance to 1.7 million in South Sudan because of other global humanitarian needs and a drop in funding to the agency.

That, UN News reported June 14, means there is little to do except to provide the minimum for South Sudan.

"Families have completely exhausted any food reserves and are likely to continue to suffer acute levels of hunger as the lean season deepens," Adeyinka Badejo-Sanogo, the World Food Program's acting country director in South Sudan, told UN News. "Essentially, WFP in South Sudan, we are in 'famine-prevention' mode."

In short, the challenges never seem to end in South Sudan. Yet, as the new book suggests, Solidarity with South Sudan has been unflagging in its commitment to the country, as Bishop Edward Hiiboro Kussala of Tombura-Yambio writes in the foreword.

Solidarity with South Sudan "has walked together with local, national and global organizations and well-wishers for the development of the people, thus illuminating the features of this dynamic movement,'' he writes.

Collaborative Mission was edited by Fr. Lazar Stanislaus, the generalate mission secretary of the Society of the Divine Word in Rome, and Sr. Carolyn Buhs, a member of the Sisters of Notre Dame de Namur who served as a teacher for one of the Solidarity projects and is now based in Kenya. Copies of the book are available from Friends in Solidarity with a recommended $20 donation.

US churchwomen killed in El Salvador are 'martyrs,' cardinal says

Serving the poor among the poor, and blooming in religious life

Q & A with Sr. Yexci Moreno, watching out for 'my children' during economic crisis