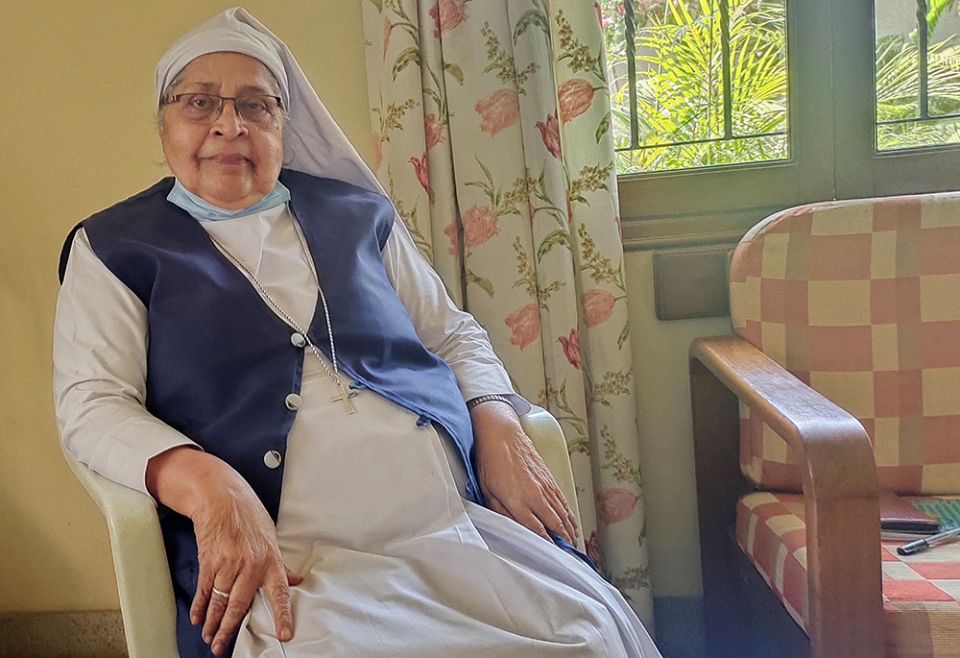 St. Joseph of Tarbes Sr. Mary Mascarenhas is popularly known as "the Mother Teresa of Bengaluru" for her work among leprosy patients in the southern Indian city of Bengaluru. (Thomas Scaria)

Bengaluru, India — Sr. Mary Mascarenhas, a member of the Sisters of St. Joseph of Tarbes, has been called "the Mother Teresa of Bengaluru" for her 40 years of outstanding work among leprosy patients.

The 83-year-old nun associated with Sumanahalli, a center engaged in leprosy rehabilitation, has found jobs for nearly 600 patients whose leprosy has been cured but who have related disabilities. She has also built hundreds of houses for the patients, educated their children, and arranged marriages for more than 100 couples.

Mascarenhas has received several awards, including one from Indian President Ramaswamy Venkataraman in 1989 for placing the most people with disabilities in government services. She continues to work for people affected by Hansen's disease, even after her retirement in 2018.

She shared with Global Sisters Report her struggles for restoring the dignity of leprosy patients and reintegrating them into society. 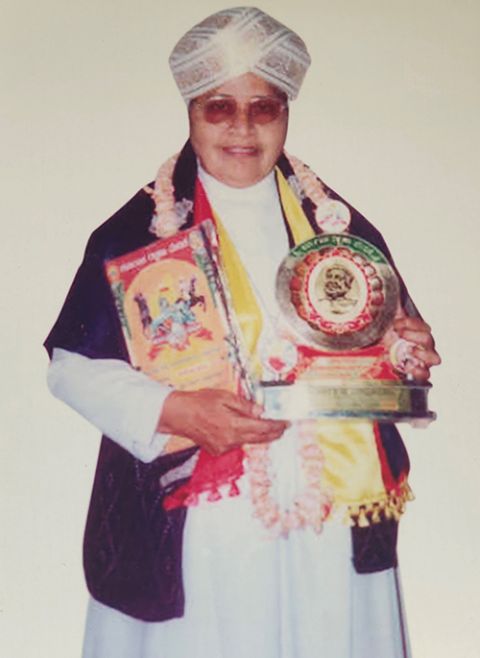 Sr. Mary Mascarenhas has received over a dozen awards at the national and state levels, including the award for best placement officer from the president of India in 1989. (Courtesy of Sumanahalli Society)

GSR: You have been asked to rest after decades of work. How do you enjoy your retirement?

Mascarenhas: True, I am confined to our motherhouse in Bengaluru and compelled to take rest. But how can I rest until I truly "rest in peace"? I am always preoccupied with my people. They keep calling me, and I do whatever is possible to coordinate their rehabilitation. Some call me to inform about their salary increases, others about their promotions or complaints about discrimination. Some share about their children's academic achievements. They call me "Amma" ["Mother"]. How can I rest without attending to their calls?

How did you develop this passion for people with leprosy, and why did you become a nun?

I had a soft corner for such people even from my childhood. My father, who was a health worker, always advised me to never ignore the beggars or leprosy patients who seek food or water. I have seen him touching and serving them with compassion.

As a student of a Bethany school in Puttur, my village [some 280 miles south of Bengaluru], I was inspired by the Bethany Sisters' dedicated social work and humble behavior. I wanted to join their congregation, but my studies led me to be a government-approved teacher in St. Joseph's High School in Puttur. The school is managed by St. Joseph of Tarbes Sisters, and I was attracted to their lifestyle. Gradually, I found my vocation here.

How was the transition from teaching to leprosy rehabilitation?

Sumanahalli was started in 1978 after the Archdiocese of Bangalore accepted a request from the then Karnataka chief minister. Archbishop Packiam Arokiaswamy of Bangalore requested religious congregations to manage the center.

St. Joseph of Tarbes was among the first to accept the challenge. Our superior general then called for volunteers to serve leprosy patients. I gave my name since I thought I had a special vocation to serve the children of ostracized leprosy patients. I resigned from my job and took a bus to Bengaluru. 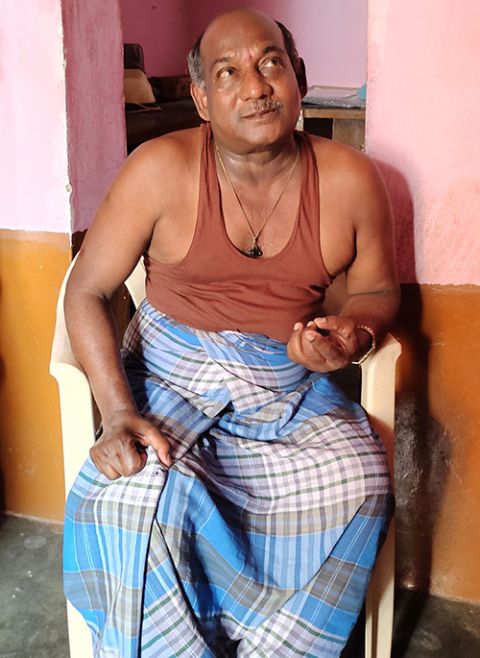 Radhakrishnan, a rehabilitated patient who retired from a government job and settled in his home. His son now studies engineering. (Thomas Scaria)

What did you do in Sumanahalli?

I started a small school on the campus, a shed under a tree. Today, St. Joseph's English Medium on the campus has more than 600 students, including some from neighboring villages. It took several years of awareness programs to help the public overcome their fear of leprosy. Many graduates of our school have found secure jobs and now lead a normal life with dignity.

You were also involved with a government-run beggars' colony in the area. How do you recall those days?

The Bangalore Archdiocese was asked to manage the new place. The government invited me to work also in the beggars' colony. My job was to identify and transfer leprosy patients to Sumanahalli. I was in the colony's governing board for nearly 20 years and shuttled between the beggars' colony and Sumanahalli. I volunteered to supervise the community kitchen. I had to fight to get them good food.

I also invited religious congregations to send their novices and seminarians to the colony as part of their formation. They helped in nursing, grooming, counseling, and agricultural activities in the colony. 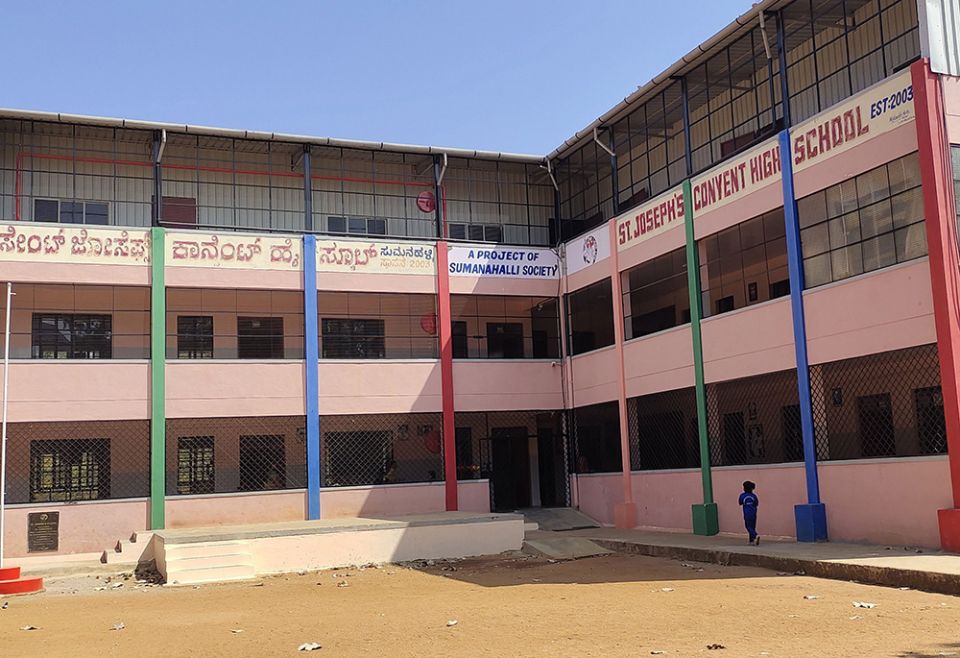 What did you do for the leprosy patients?

Besides educating their children, I had a big challenge to find jobs for cured leprosy patients. I spent a lot of time liaising with the government officials to find suitable jobs for my people.

Wherever policies lacked, I pressured legislators to amend policies. One amendment was to make it compulsory to employ cured patients. For this, we had to get relaxation in educational qualifications required for jobs. Most of them are employed as cleaners, office assistants, clerks, supervisors, and sanitary workers. 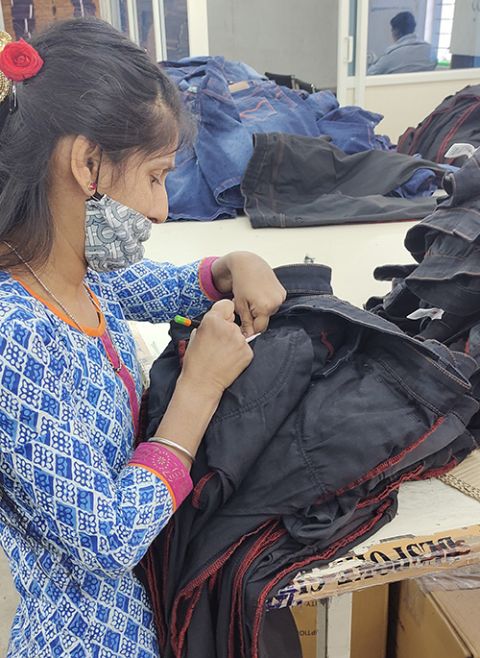 The daughter of a leprosy patient works in a garment factory within the Sumanahalli campus in Bengaluru, southern India. (Thomas Scaria)

I did not face any challenges, but my people did. My advocacy got them jobs, but they faced discrimination at their workplaces initially. I had to visit their departments to sensitize their co-workers. Once, I noticed our people were denied entry to the workers' canteen. They had to bring food from home and eat outside. Similarly, some restaurants outside the workplaces refused to entertain them. I took an employee to a nearby hotel where he had been denied entry. I introduced my companion to the restaurant owner as a health inspector and told him to stop the discrimination or his license from the health department would be canceled. It worked.

So fighting social stigma was more challenging than securing jobs for them.

Yes. Almost all our people faced resistance from co-workers initially. My attempts were to instill confidence in our people so that they could assert their dignity. So, just finding them jobs was not enough; they needed accompaniment. That is what I do even now through phone calls and WhatsApp.

Most government officers are Hindus. Have you faced any problems as a Catholic nun?

No. In fact, people respected my identity as a nun. They respected my dress, too. I became a familiar face for many officers in Vidhana Soudha [the state assembly building]. The Hindus are respectful to Catholic nuns generally. Only in recent years, some political groups started suspecting us. Most of my associates, officers and supporters are Hindus, and I have never faced a serious issue with the radical groups so far.

However, some Hindu groups once accused me of conversion. I invited them to come and see. I literally forced them to visit Sumanahalli to find out what happened there. Many became Sumanahalli supporters after the visit.

Mary Mascarenhas on the phone.jpg 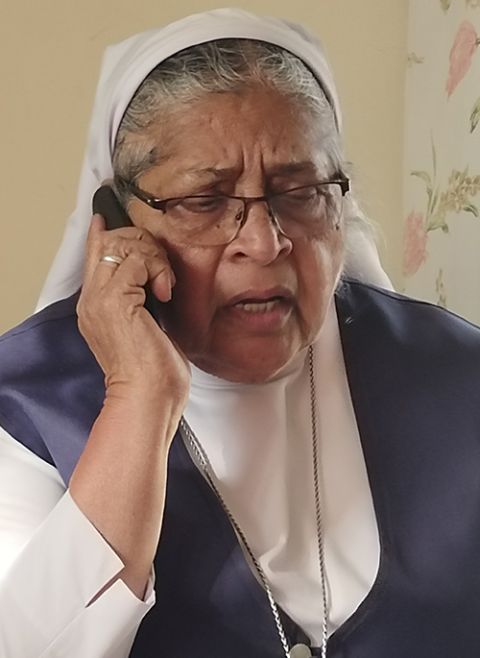 How did you react when you were given the title "Mother Teresa of Bengaluru"?

I don't think I deserve that title. Mother Teresa picked up dying people from the streets, washed them, gave them good care and love and allowed them to have a peaceful and dignified death in her arms. It was a great service inspired by the love of God.

My philosophy is a bit different. I pick up leprosy patients, treat them, empower them, and reintegrate them back to society with jobs, houses and dignity. Our mission is different; so also is the approach. I was dealing with a curable disease and fighting with an incurable social stigma. I had to be an activist and a catalyst, an agent for change.

Do you have any advice for other sisters?

I think the church now needs more activists who are visible witnesses to Christ. Let people see and judge our services. If they should see our work, we have to be among them. Not many are willing to come out of their comfort zones and witness Christ in the public. I also wish our people utilized available government projects instead of waiting for funds from overseas. This requires advocacy, courage, conviction and commitment.

What is your retirement plan?

My only desire is to live as an activist for Christ until my last breath. I have lived my life for leprosy patients. I have pledged to donate my organs and to give my body to medical students for their study. My congregation and family members have approved my plan.

Ministry | Q & A with Sr. Mary Mascarenhas, advocating for people with leprosy for 40 years