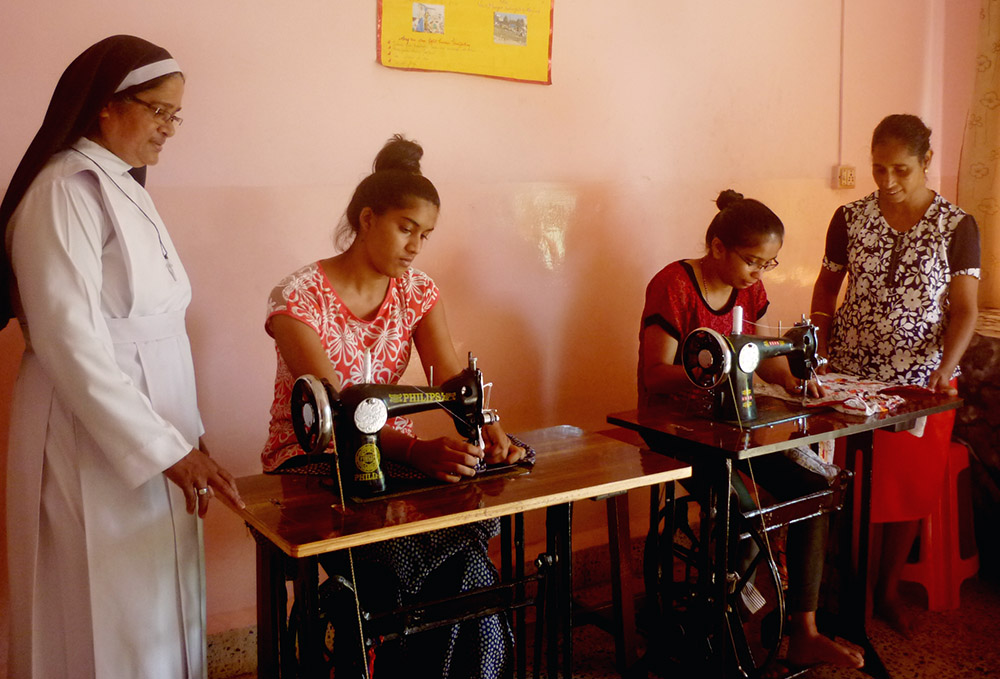 Sr. Lourenca Marques, a member of the Congregation of the Sisters of Holy Family of Nazareth, observes training in stitching with teacher Mary Fernandes (far right) at Asha Sadan at Baina in the western Indian state of Goa. (Lissy Maruthanakuzhy)

Kasturi Rupali turns into a bundle of joy when she sees Sr. Lourenca Marques. "Sister is everything to me, my father and mother. What I am today is because of her," the 26-year-old daughter of a commercial sex worker says, clasping the hands of Marques, a member of the Congregation of the Sisters of Holy Family of Nazareth.

The young woman came to Asha Sadan (house of hope), a center the congregation manages at Baina Beach near Vasco, the port town of Goa state in western India.

Rupali grew up at the center from infancy, as did Anand Patil, who turned up for a visit on a November afternoon in 2020.

"Sister Lourenca put me in one of the best boarding schools run by Capuchin fathers in Goa. I have no regrets today," Patil, 32, said with joy radiating from his mustached face.

Now employed, he has married a girl who had grown up with the Holy Family nuns from childhood.

Rupali, Patil and his wife are among more than 80 children of commercial sex workers and HIV-positive women Marques has helped to forget their dreary past and settle in life.

"These children are very helpful to me now. They help one another financially, too," Marques told GSR, pointing to the two visitors. She said Asha Sadan's former residents now gather together for holidays. "I take them for picnics. We have Christmas celebrations together. We are like a big family," the 56-year-old nun continued with pride ringing in her voice. 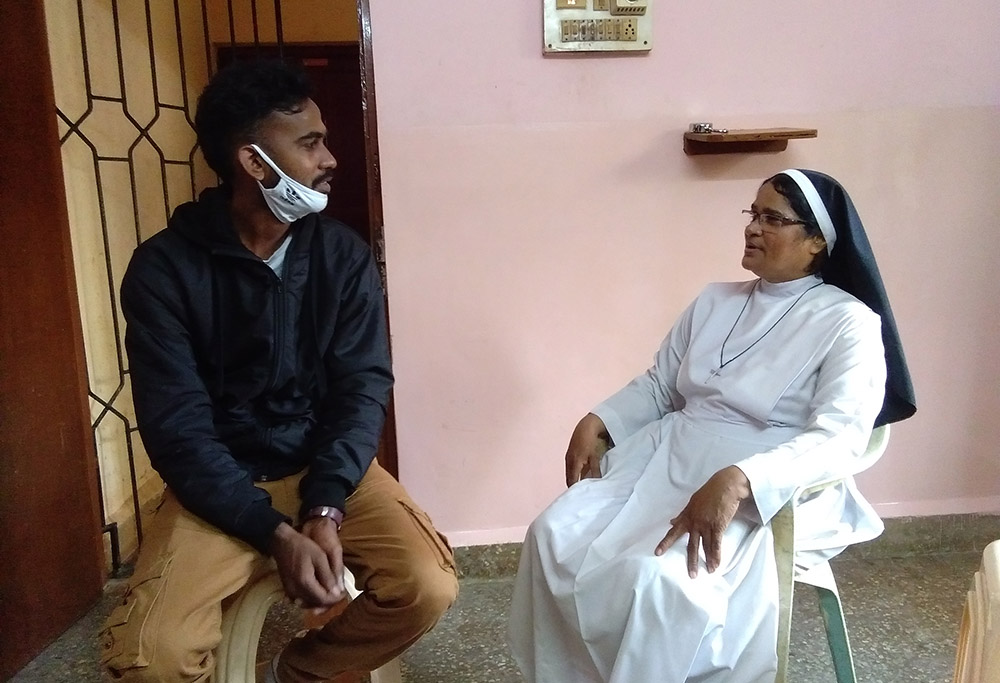 Anand Patil, who grew up in Asha Sadan in Baina, Goa, western India, talks with Sr. Lourenca Marques of the Congregation of the Sisters of Holy Family of Nazareth. (Lissy Maruthanakuzhy)

It all began 28 years ago when Marques accompanied her then superior, Sr. Jane Pinto, to Baina to introduce her to their new mission in Goa's infamous red-light district, which was confined to a single street. The nuns' mission aimed to give a new life to the children of commercial sex workers and women living with HIV.

"I was shocked to see little children wrapped in dirty clothes begging on the beach," recalled Marques, who had completed a bachelor's degree in social work.

The beach was dotted with a stretch of huts where women cooked for their children between meeting their clients.

"The women and their pimps looked at us with suspicion, as if we were a threat to their thriving business. We felt strange moving around in a strange world," Marques recalled.

The women were unapproachable and unfriendly. "We could not enter some houses, as customers were waiting for them. We were puzzled how we would carry on our mission among such people," she told GSR.

The nuns stayed in Baina for easy access to the women and their children. They began with family visits, although no one welcomed them initially.

"I came with a statue of Mother Mary. She has helped me," Marques said with a smile. Their persistent visits helped build a rapport with the women and their children. Trust in the nuns grew gradually. 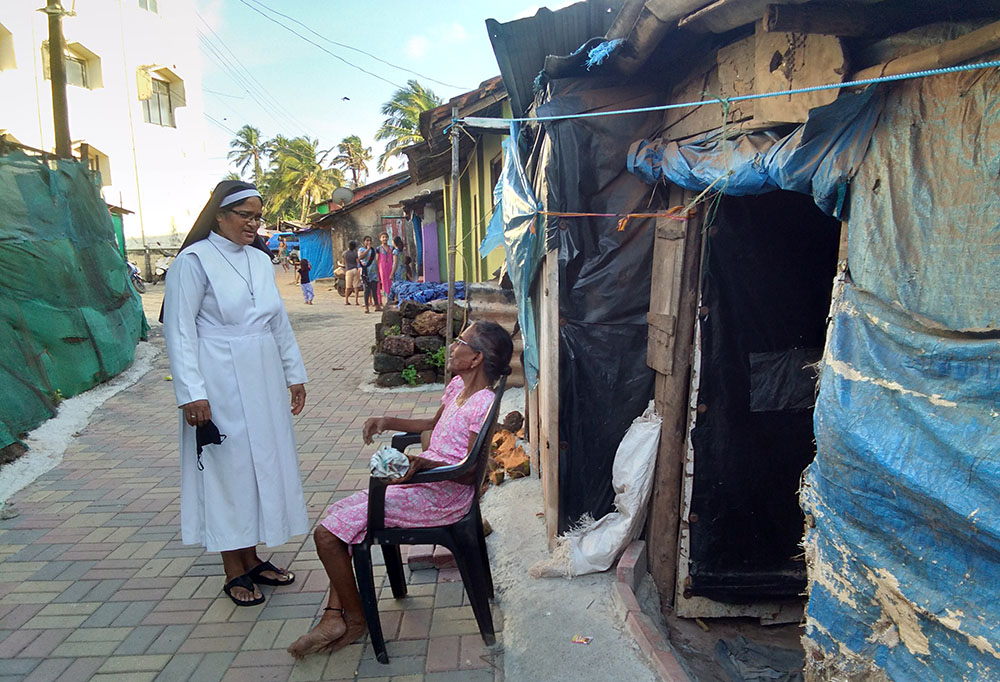 In the initial years, Marques found the local "respectable people" hesitant to disclose that they also lived in Baina, near the red-light neighborhood.

The main customers for the women were sailors, who came to the port.

In 2002, Manohar Parrikar, the then chief minister, or governor, of Goa, tried to end the flesh trade in the state by torching the huts in Baina. "But now it has spread all over Goa," Marques bemoaned. Some women still operate from Baina.

The nuns found most women in the trade were ages 14-25. They came from the nearby states of Andhra Pradesh, Karnataka and Maharashtra and were trafficked into prostitution because of poverty or ignorance. "Sometimes their family, relatives or even boyfriends lure them to the trade," Marques explained.

"A part of the earnings would go to brothel owners and for cosmetics," Angela told GSR.

The young nun recalled a woman telling her that she felt like a caged bird on the red street. She pleaded with the brothel owner to let her go home, but she refused, saying the woman had to pay back the money the owner had paid to the agent who brought her there.

"She had to sleep with men even when she fell sick. She was warned that if she escaped, they would track her down and kill her and her parents," Angela said.

Women who spoke to GSR asked not to be identified.

One of them, still living in Baina, said she had landed there after a "well-dressed woman" visited her village in Karnataka and promised a lucrative job in the city.

"We were uneducated and were happy to earn some money. We trusted her and took the bus to Goa with our parents' consent. Only after reaching here did we realize the trap she had set for us," she said.

Some women have surrendered to their fate. "My father sold me when I was 14. I get good food and clothing. There is nothing to complain about. After a few years, I will be free from my debts and then I will become a madam and get girls to work for me," said a young woman.

Marques says her congregation took up the mission as a challenge among the women, who are hidden from society. 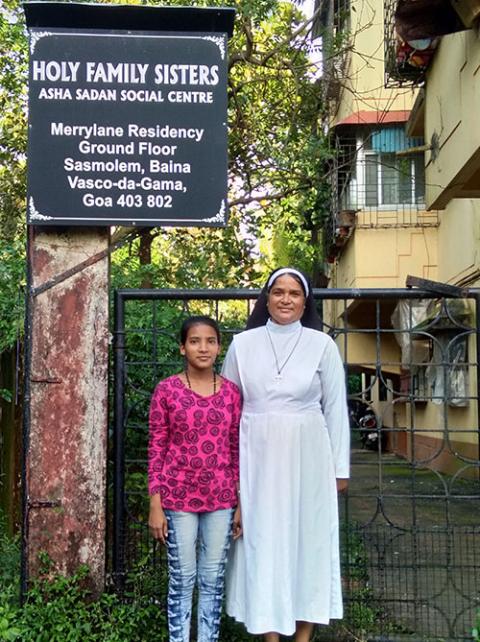 Sr. Lourenca Marques, with Aswini Gaunder, one of the girls helped by Asha Sadan (Lissy Maruthanakuzhy)

The sisters set up Asha Sadan on the ground and fourth floors of a four-story building, a five-minute drive from Baina Beach. They then welcomed the children from Baina Beach to Asha Sadan. Sometimes mothers would bring their children to the nuns' center while they continued working.

"We visited the hutments two or three times a day to bring the small children to the center to feed and teach them. Some would run away and loiter around," Marques said of their initial days.

The nuns still manage the day care center for children and women. These days, they prepare children ages 3-6 for primary education, besides feeding them nutritional meals.

"As they grew up and could manage by themselves, I placed them in one more house [a group home 30 minutes drive from Baina]. The older ones look after the younger ones now. I visit them each day. Many are day scholars now. And I live in my convent," Marques said.

During holidays, the children would be brought to Asha Sadan. "We would sleep on the floor, girls on one side of me and boys on the other side," Marques said.

The nun also placed some promising students like Patil in reputable boarding schools.

Rupali said she came to the nuns as an infant. "My maternal aunts brought me to her [Lourenca] as my mother was too sick. I had two elder brothers. I have not met them. ... One of my aunts also stayed with me, and the sister educated her. She is doing well in life now."

Rupali was between jobs, staying at Asha Sadan. She has found a new job as a receptionist in a hospital in Margao, Goa's commercial capital. 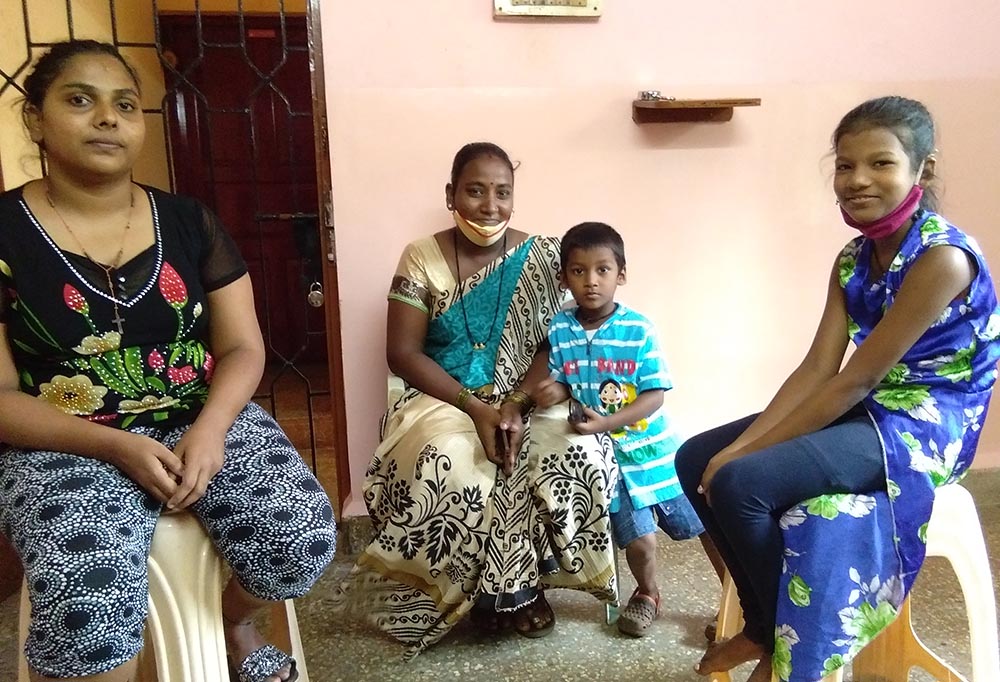 One of the nuns' admirers is Archbishop Filipe Neri Ferrão of Goa and Daman.

The prelate praises Asha Sadan for catering to the "genuine psychological, spiritual and socioeconomic needs of the commercial sex workers."

The center offers the women rehabilitation and wholesome personal development, he says.

He is happy that the nuns now try to curb the trafficking of minors and counsel sexually abused children. "The sisters educate the children of sex workers, most of them school dropouts who are on the streets. Many have taken up careers in medicine, nursing, teaching, business and hotel management after the nuns took them," the archbishop explained.

Marques says some of her children excel in their colleges. "One has completed his forensic studies. Twelve of them are working in different countries," said the beaming nun.

The sisters also help women change their lifestyle by training them in tailoring and handicrafts such as flower making and embroidery. They are also taught to make pickles, sweets, baby clothing and blouses. "The products are sold during exhibition sales organized during church feasts in various places in Goa," she said. 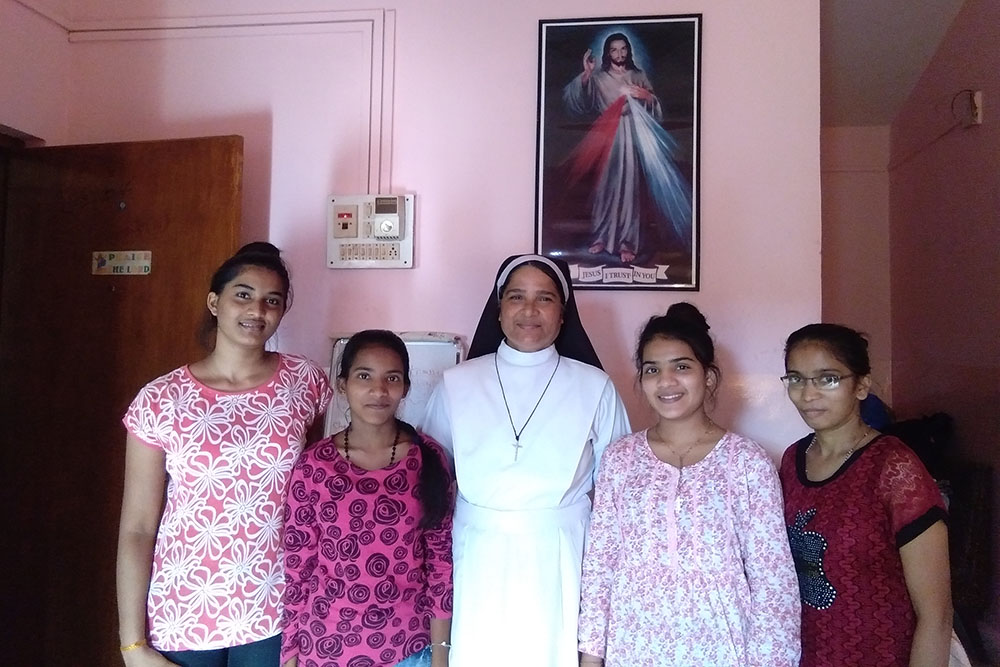 The aim is to make the female sex workers and poor women in the neighborhood responsible and respectable citizens, she added. The boys in these families are trained in other career centers run by church personnel.

The nuns also conduct an AIDS/HIV awareness program for the women and local youth.

Superior general Sr. Alvita Gurjao is proud of the sisters at Asha Sadan, who "play the role of a mentor, educator, companion guide and a friend in order to give them a new vision to life."

She said the lives of women have improved because of the sisters' regular visits and gentle approach. "Our people have managed to build up a rapport with the women and their children."

During the pandemic, Marques has provided masks, made by the center's sewing students, and essential items to those in need and has raised money for tuition for young children to come to the center. She has organized classes for children who could not afford smartphones to take courses online and COVID-19 awareness talks for women.

Asha Sadan has received several awards for its work among the unfortunate children. Marques showed a photo of Asha Sadan's award from the U.S.-based Goa Sudarop Community Development for "the valuable and dedicated services rendered towards the care and education of the orphans and underprivileged children."

In 1996, Marques received the national award for child welfare from India's then-President Shankar Dayal Sharma on behalf of Asha Sadan.