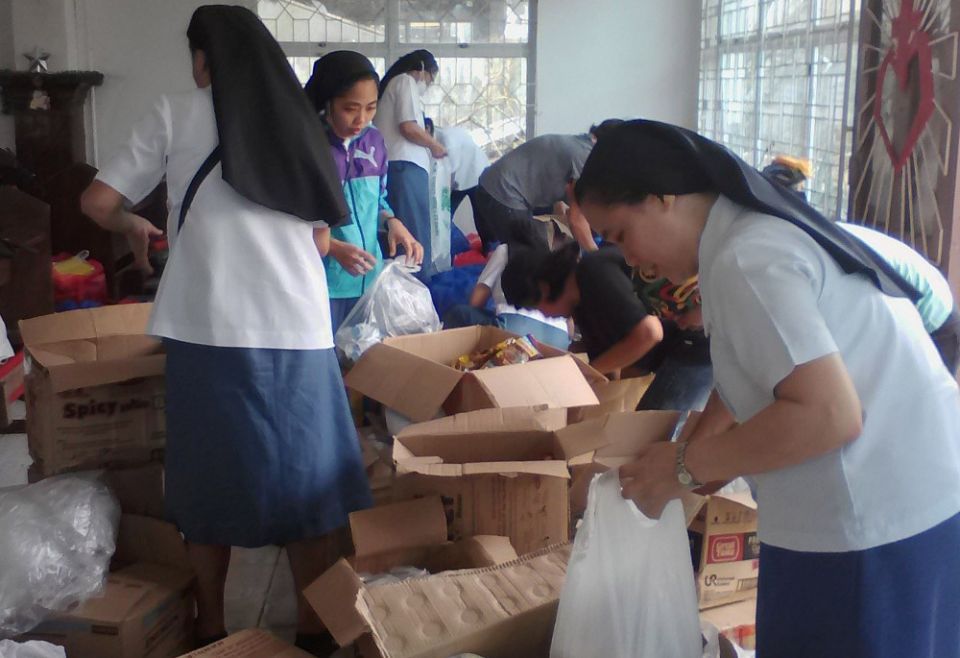 Manila, Philippines — More than six weeks after a super typhoon raked a large swatch of the central and southern Philippines, Catholic sisters are assessing damages, starting to repair buildings and assisting their neighbors in the storm-affected area, part of a massive rebuilding effort in the wake of destruction.

Typhoon Odette (known internationally as Rai) landed in Mindanao on Dec. 16 and wreaked havoc in the island nation with multiple landfalls until it exited the Philippines two days later. Some 2.5 million families (9.1 million people) in 38 provinces were affected by the typhoon, with 409 reported dead and nearly 1,400 injured. Infrastructure and agriculture losses top $670 million.

Power and communication lines are being restored, although because of the ongoing challenges with communication, interviews with sisters for this story were conducted via email. Aid has been pledged by the United States, Canada, China and South Korea, while a United Nations agency called for $107.2 million to support urgent humanitarian needs over the next six months. Pope Francis on Jan. 18 sent an initial contribution of 100,000 euro (about $113,000) through the Dicastery for Promoting Integral Human Development.

Once the storm abated, sisters immediately swung into action to assist, though the government reimposition of travel restrictions due to the spike in COVID-19 cases in January has made reaching those in need even more difficult. Border checkpoints requiring negative RT-PCR results upon entering has become an added burden to logistics and volunteers.

Medical Mission Sr. Rowena Pineda, chair of the Sisters Association of Mindanao, said the two-day relief effort they did in December as part of the civic group Balsa Mindanao included distribution of relief goods, conducting psychosocial intervention, and providing a cellphone charging station for 1,000 families in Surigao City, one of the hardest hit areas.  Balsa Mindanao is scheduled to return to Surigao City on Feb. 3-5 to bring shelter material, provide psychosocial intervention, and an additional cellphone charging station. 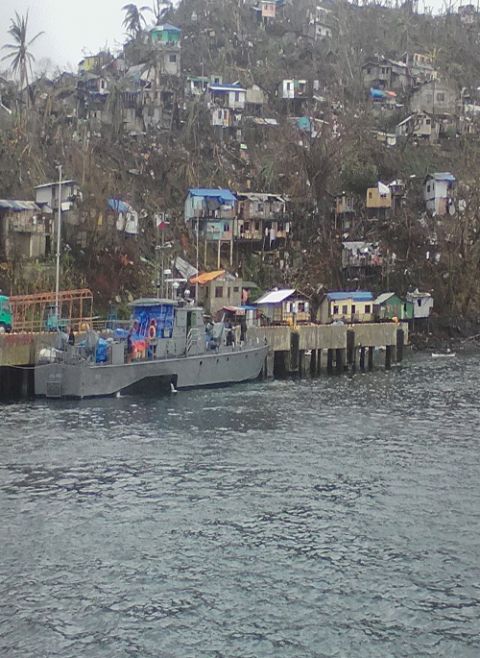 The port of entry for most vessels coming from Surigao City to the Dinagat Islands. The naval boat offered to help the sisters make the crossing while the supplies they brought with them were carried in a bigger ship. (Courtesy of Missionary Sisters of Mary)

Observing pandemic protocols was difficult as not everyone wore facemasks or observed physical distancing when lining up to receive their packages. "There were challenges in making people comply because they were hungry," she said. The sisters also saw how evacuation centers were overcrowded, that there was lack of access to potable water — with cases of water-borne diseases reported — and a lack of clean water to maintain hygiene.

Missionary Sisters of Mary also assisted with relief efforts. Sr. Felicidad Solatorio said she and her fellow Missionary Sisters of Mary in Mindanao have not been affected as much as her sisters in the Visayas. The pre-novitiate formation house and convent in Mindanao were damaged by falling trees. But the three MSM sisters who manage an elementary school on Bohol Island in Visayas have to deal with repairs to their convent and a massive clean-up. When the typhoon hit, she said the sisters could feel the ceiling and walls of their convent shaking.

"The roofs were not blown off because some of the fallen branches of the trees surrounding the school and convent landed and pierced them creating some holes thereby [allowing] the flow of water [to enter] their premises," Solatorio said. If the roofs had blown off, the damage would have been even more extensive.

She added that when the typhoon left, the sisters visited and spoke with their neighbors to assess their conditions. "All suffered the same, lack of water supply and no electricity." 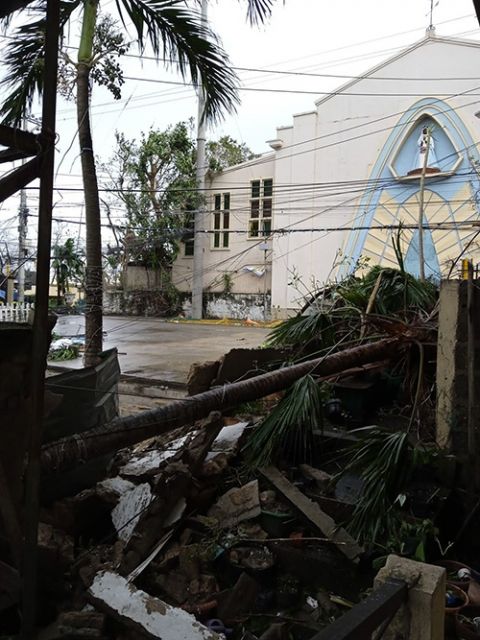 On Dec. 20, five Mercy sisters traveled nearly more than 300 miles (more than 480 kilometers) from northern Mindanao Island to a town on Leyte Island to provide aid to 300 families affected by the typhoon. A Mercy sister is from that town and her family reached out to the congregation after the typhoon hit asking them to help the community.

The sisters, who are based in Lanao del Norte province, northern Mindanao, saw the devastation wreaked by the typhoon and spoke to people along the way. Mercy Sr. Helen Libo-on said that residents spoke of how those living along the coast were told to take shelter in the high school that was on a mountain. "They thought it was the safest areas, but it wasn't," she recounted. "The glass windows were broken and the children were quick to shelter themselves under the tables." She said people eventually moved to a different evacuation center. "It was a good decision that the people living in the coastal areas evacuated since all the houses in the coastal areas were blown away both by the waves and the strong winds."

The sisters, a driver and a brother and brother-in-law of one of the sisters traveled for two days by truck and ferry to get to Leyte Island, finally reaching the town of San Francisco in Southern Leyte province late at night on Dec. 22.

The next morning, Libo-on said locals helped them repack the rice, water, dried fish, canned goods, coffee, sugar, biscuits, soaps, laundry detergent, and pails into bags for easier distribution. She added that those who helped also created a list of who lived in the community since they only brought goods for 300 households.

"They were so glad to see us since that was the first time they received help. Everything was ready for distribution, which went fast because everything was in order," Libo-on said. A few of the packed goods were given to families who came from neighboring communities and others were set aside to be distributed to families who lived in the coastal areas and whose houses were washed out.

They immediately left the town to return to Mindanao to prepare for other missions, she said, but had to wait for 20 hours at the port to a get a ferry back.

Before returning to their convents the sisters made a stop at a city where Mercy Sr. Derby Mercado had relatives as it was already around 7 p.m. and it was nearly time for the online midnight Mass. "Sister Derby's family took care of our food, so we were able to eat after the Mass and had a good night's sleep," Libo-on said. They were able to join other Mercy sisters for Christmas Day. "It was a very exhausting mission but our hearts were full with gladness because we know we made some people happy in spite of their sad experience of Typhoon Odette," Libo-on said of their five-day journey.

Other Mercy sisters also had to deal with the aftermath of the typhoon on Camiguin Island where they administer a high school and a college. Mercy Sr. Maria Gesila Daypuyat, principal of Columbia St. Michael's Parish High School, said the typhoon "has caused destruction of houses of our students and employees as well as our school properties and facilities including power outages and Wi-Fi or internet disconnection or collapse."

Daypuyat said the building housing the school library, some offices and the convent where the sisters reside were severely damaged by a huge acacia tree that fell on it.

Mercy Sr. M. Raphael Amante, directress of Fatima College of Camiguin, said that 14 trees in the campus have been uprooted and damaged several facilities and electrical wirings. The strong winds also damaged the roofs of buildings and windows broke, causing water damage inside the offices. Amante said that the college was actually celebrating its centenary foundation as the first Catholic school on the island this school year. "Recovery efforts are still underway and we are doing our best to gradually restore what had been damaged according to the available resources we have."

Daypuyat and Amante both said that they were hoping for the generosity of donors to help with their recovery and restoration efforts. Aside from various natural calamities that they have had to endure, the pandemic has also affected their enrollment numbers resulting in some losses to the financial and economic operations in their two schools. "We remain hopeful we can overcome these challenges with God's grace and mercy," they added in an email.

In Cebu City, Missionary Catechists of St. Therese of the Infant Jesus Sister Ma. Corazon Talay said that the typhoon damaged the roof of their convent and the covered walkway in front of it. She explained that their convent was already old and had termites, so they were already planning to have it renovated even before the typhoon hit.

Talay added that the Association of Consecrated Women of Cebu, of which she is chair, decided to donate some of their own funds plus money raised from their Advent Recollection for a Cause via Zoom to Caritas Cebu to help with their initial relief efforts.

The typhoon also changed the Association's plans to commemorate the 500 years of Christianity in the Philippines. She said that they had planned several activities including a day for planting fruit bearing trees to celebrate the Jubilee of Consecrated Women of Cebu on Feb. 2 (World Day of Consecrated Life). "We decided instead to assist some communities that are still struggling and are hard-up because of the severe damage in their area."

The various religious congregations, she said, have been "doing their respective charity works to the communities that are badly hit, such as providing potable water and food. They also assist in rebuilding damaged houses and give assistance to poor families in the remote areas." 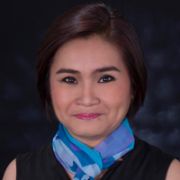 Charity Durano is a journalist based in the Philippines.