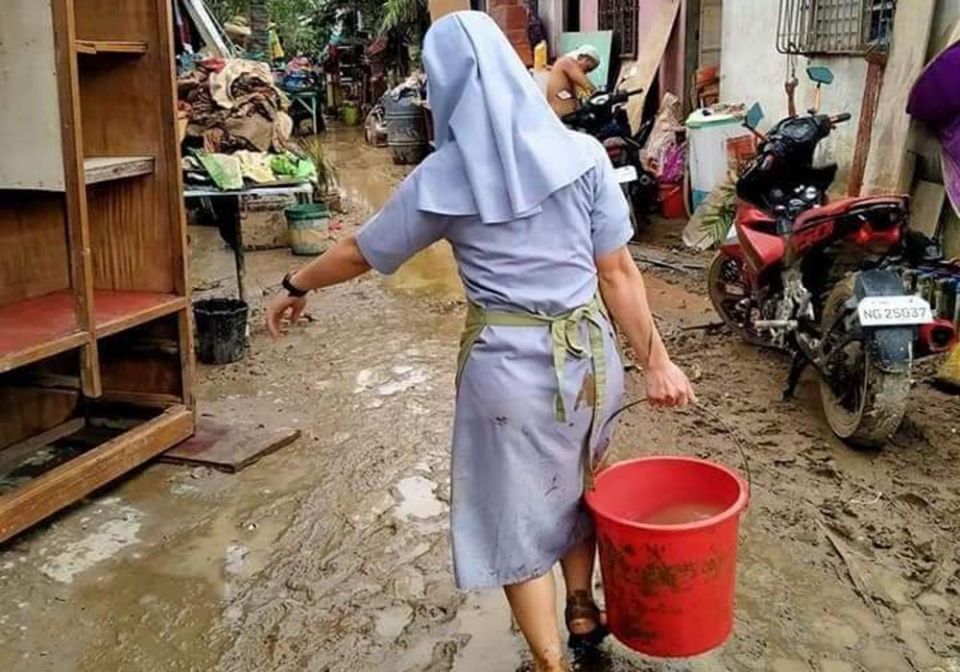 Sister of the Daughters of St. Anne helped residents clean up mud in Bagong Silangan, an area of Quezon City in metropolitan Manila after flooding caused by Typhoon Ulysses, the local name for Typhoon Vamco, which hit the region Nov. 11. (Courtesy of Daughters of St. Anne)

Manila, Philippines — While many religious congregations and church groups ferried relief goods or sent cash as usual to help after disasters to typhoon-ravaged and flooded Luzon provinces and parts of Metro Manila after Typhoon Ulysses (also known internationally as Vamco) struck the Philippines on Nov. 11, the Daughters of St. Anne sisters did something different this time: They roughed it in flood-stricken places and helped people shovel and wash away the thick mud in their homes.

It was their way of making their presence felt among those whose homes were damaged or destroyed, said Sr. Crisvie Montecillo, head of the sisters' community and formation house in Quezon City in Metro Manila.

"The home of the driver of the Association of Major Religious Superiors in the Philippines [or AMRSP] was among those submerged in the flood," said Montecillo, co-executive secretary of AMRSP, "so we thought of going to his place in Bagong Silangan."

Bagong Silangan is an area in Quezon City where many former informal settlers had been relocated.

"One junior sister suggested that we help people clean up," Montecillo added. And so they did.

Armed with brooms, brushes and buckets, the sisters first visited Bagong Silangan and after that, the areas in the towns of San Mateo and Rodriguez (formerly Montalban) in Rizal province. These two towns were submerged in floodwaters, with some parts almost up to the rooftops where residents waited until rescuers came for them.

These two towns are near mountain ranges where quarrying and forest denudation are said to be rampant. The release of waters in several dams is also partly being blamed for the sudden rise of floodwaters.

Among the Metro Manila cities that were badly flooded was Marikina City, a model city of cleanliness and order, but a valley and catch basin. It was also submerged during the 2009 Typhoon Ondoy (also known internationally as Ketsana), which dumped 12 hours of heavy rains without let up, and killed an estimated 1,000 Filipinos throughout the country. People still recall unforgettable images of dramatic rescues. But rain was not that heavy this time, so Marikina residents are wondering why the flooding was even worse.

Among the places in Marikina City that was flooded up to the rooftops was Provident Village, a middle- to upper-class residential community. Residents of Josefheim, a home for the poor and sick elderly, had to be evacuated. The 17 residents are now temporarily sheltered at the St. Bridget's School run by the Religious of the Good Shepherd.

"We thought maybe our presence and helping clean up could provoke people to keep busy," Montecillo said. "Some of them looked tulala (stunned or in a stupor) and depressed. They did not know where to start."

"It was my first time to see something like this," said Indonesian novice Sr. Suriani Waruvu, 23. "But the people welcomed us. I was so excited to help. On the first day we cleaned from 1 p.m till 7.p.m." 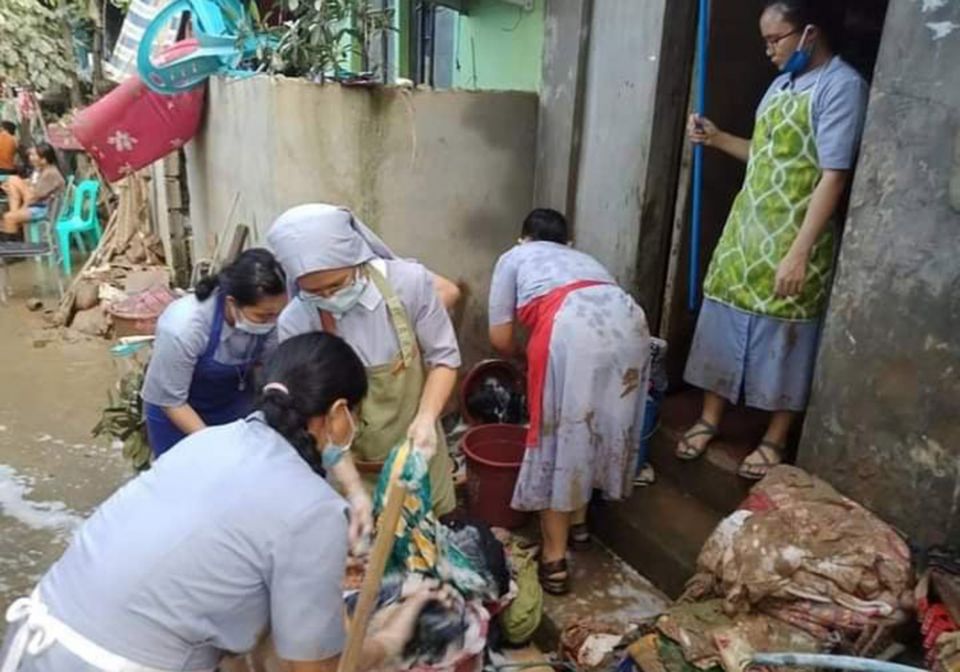 "It was a great opportunity to be with the people," said Indonesian Sr. Mate Lase, 27, a junior sister studying at the St. Vincent School of Theology. "We want to give strength."

They were not surprised to see people's faces light up and the places where they worked soon hummed with activity. They also saw up close the people's needs — blankets, mats, food and medicines for skin sores caused by prolonged soaking in muddy and filthy waters.

The sisters learned only later that they were on the evening TV news.

Theology student Br. Ruel Jumao-as, 35, of the Sons of St. Anne (the brother congregation of the Daughters of St. Anne) said bringing relief goods was difficult as some areas were hard to reach.

Founded in Italy by Blessed Mother Rosa Gattorno in 1866, the Daughters of St. Anne came to the Philippines in 1992. They have communities in three dioceses. The congregation's Asia-Pacific province is composed of the Philippines, Indonesia and Australia.

This is the latest disaster to affect the Philippines. Early this year, the Taal Volcano erupted, causing a massive evacuation. Then the COVID-19 pandemic necessitated nationwide thousands of overseas Filipino workers and local residents to be stranded. (There have been over 421,700 cases of COVID-19 and more than 8,100 deaths, as of Nov. 24.) Then came a series of strong typhoons.

Typhoon Ulysses was considered a Category 4 storm, and the fifth in a series of typhoons and the third strong one to strike the Philippines in a month. The region was battered by two super typhoons — Rolly and Ulysses — in a span of two weeks. Ulysses caused massive flooding in parts of Metro Manila and northern Luzon that was considered worse than what Typhoon Ondoy (Ketsana) wrought in 2009. In southern Luzon, flooding was not as severe but the strong winds and landslides destroyed homes, buildings and farmlands.

Also badly flooded are the northern Luzon rice-producing provinces of Isabela and Cagayan, bordered by the Sierra Madre mountain range. Weather experts describe the flood as a once-in-a-hundred years flood. Climate change is often mentioned by experts and analysts as a contributing factor. About 30 tropical storms and typhoons enter the Philippines region every year.

The strongest typhoon in the world's recorded history struck the Philippines in 2013. Super Typhoon Yolanda (international name: Haiyan) left more than 6,000 dead in its wake. Pope Francis visited the typhoon-ravaged province of Leyte in Central Philippines in 2015.

[Ma. Ceres P. Doyo has been a journalist for more than 30 years. She writes features, special reports and a regular column, "Human Face," for the Philippine Daily Inquirer. She covers a variety of subjects, church matters among them.]