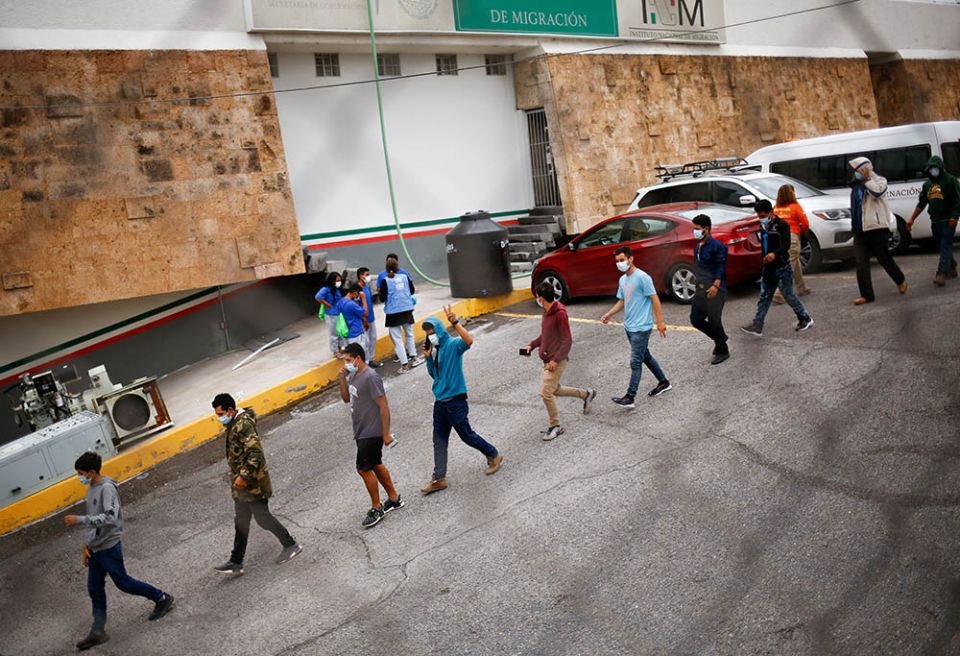 Migrants who were expelled from the United States and sent back to Mexico under Title 42 line up outside the National Institute of Migration building in Ciudad Juárez, Mexico, Aug. 13. (CNS/Reuters/Jose Luis Gonzalez)

After spending a couple of weeks volunteering at migrant shelters along the U.S.-Mexico border in the spring, sisters from the Congregation of St. Joseph returned home and chose to make the volunteer experience the impetus for political change.

Combining their firsthand testimonies with briefings on immigration policy and lobbying tactics, St. Joseph sisters from Illinois, Michigan, Pennsylvania and New Jersey spent the summer in conversation with their state representatives to challenge them on this issue.

Before 2021, when St. Joseph sisters returned home after volunteering along the border, Sr. Mary Jo Curtsinger, who lives in Chicago, said they would share their reflections and observations with their fellow sisters and leave it at that. But this time, Mary Novak, an associate of the Congregation of St. Joseph and the executive director of Network, a Catholic social justice lobby, encouraged Curtsinger and her fellow sisters in Illinois to partner with Network upon their return, to become engaged in the politics surrounding the border.

'It means something when sisters speak up, so we're trying.'

First, the sisters had to squash a degree of humility mixed with insecurity.

"Who are we?" Curtsinger said the Illinois sisters sheepishly wondered before testifying online July 15 to their senators' staffs, informing people who "know this stuff better than we do, we hope."

Ronnate Asirwatham, Network's director of government relations, briefed the Illinois St. Joseph sisters on how to link their experience at the border with political advocacy before the July 15 meeting. 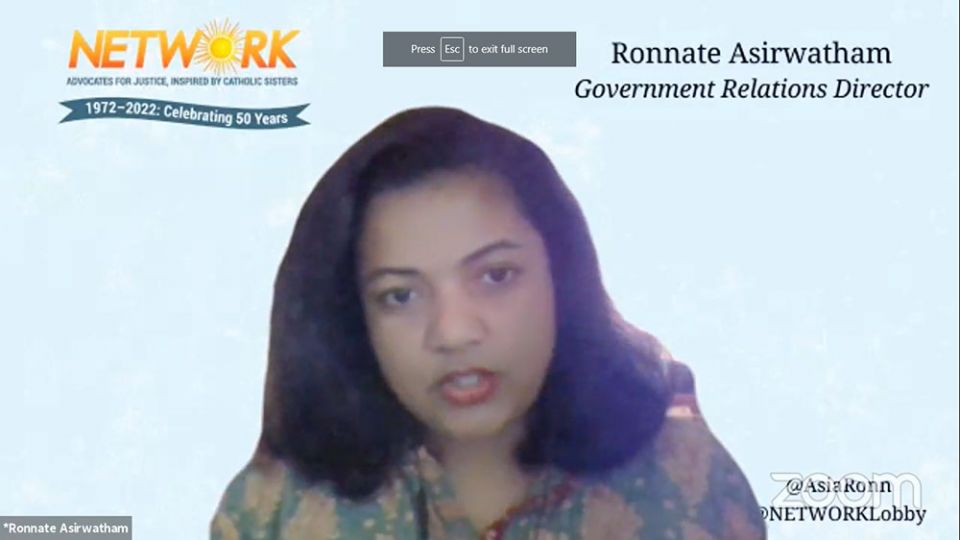 Ronnate Asirwatham, director of government relations for the Catholic social justice lobby Network, speaks about immigration policy at a Aug. 31 virtual event for the Congregation of St. Joseph. (GSR screenshot)

"It's interesting to me how many citizens, how many people of faith in this country don't see that they are able to speak to their congresspeople," said Asirwatham, who is from Sri Lanka. "But to be able to influence the government, I think, is uniquely American, and people should do that all the time."

Since she began working for the faith-based organization in January, Asirwatham has come to believe religious "sisters or fathers have a bigger body of voice, and they do have a moral responsibility to advocate."

Earlier this year, the Leadership Conference of Women Religious called on sisters of its member congregations to help at the border if they were able, prompting scores of women religious from around the country to flock to Texas and Arizona for two weeks at a time.

Related: Solidarity, esperanza and our future: sisters' dispatches from the border

Network usually helps Catholics connect with advocacy, but this mass engagement with the sisters felt new.

After the St. Joseph sisters shared what they observed and experienced at the border, they wanted to know how to connect the people with the policy. Curtsinger said Network "helped us think what the salient points were" and provided contact information for their legislators' staffers. The idea was to help the sisters move away from speaking in the abstract to using their time at the border to add legitimacy to their specific proposals.

Network offered the sisters a "menu" of policies to consider advocating, taking into consideration how swayable their representatives were on a given issue and how likely they were to make an impact. 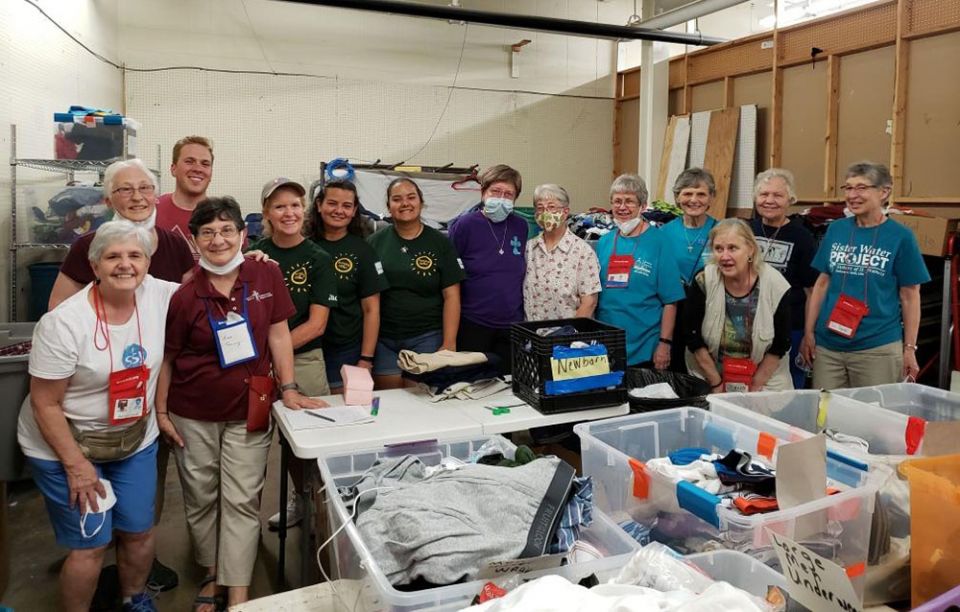 They chose as one of their priorities to advocate for rescinding Title 42 for asylum-seekers. The public health order allows the U.S. Customs and Border Protection to expel migrants to prevent the coronavirus from spreading in holding facilities. (Prominent public health experts have objected to the justification for this precaution.)

TeKolste, a Sister of Providence of St. Mary-of-the-Woods, Indiana, said Network's job was to help sisters navigate what to tell legislators about their border experience: "How do we tell the story strategically? How do we name the important parts of the stories without taking up too much time? How do we pick which stories to tell? And how do we make the connection from the stories to the policy?"

Asirwatham said Network sought to fill out the larger picture, helping sisters see that their two weeks along the border were "simply a piece of the pie," she said. 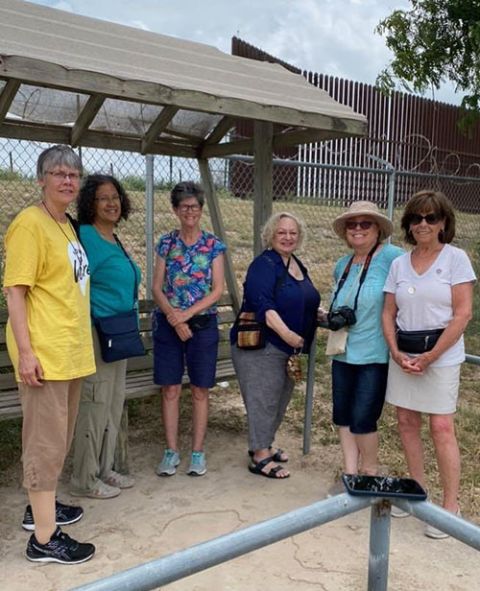 A group of St. Joseph sisters, associates and partners in mission at the U.S.-Mexico border across from Reynosa, Mexico, in the spring (Courtesy of Cecelia Cavanaugh)

"The bigger issue was what they were not seeing" — for example, the migrants they could not meet at all because of policies that kept them out of the United States.

"Based on our experience, we see that people are honest in their seeking asylum," Curtsinger said, noting that migrants at the border had shared with her stories of gang violence and economic desperation in their home countries.

In addition to the end of Title 42, the sisters are advocating for funding for locally run migrant shelters at the border; creating pathways to citizenship for migrants; ending the Migrant Protection Protocols (also known as the "Remain in Mexico" policy); and increasing official ports of entry along the border to alleviate the backlog of asylum cases that are keeping people from being able to cross the border legally.

Sr. Cecelia Cavanaugh, a Sister of St. Joseph of Philadelphia, said she volunteered to lobby Pennsylvania's Sen. Pat Toomey, a Republican, in early August, thinking that his support for the Deferred Action for Childhood Arrivals program meant there was a chance for common ground.

Cavanaugh said she and other Sisters of St. Joseph of Philadelphia felt encouraged by one of Toomey's staffers, who took interest in their recommendations for mental health services for those in detention. They intend to have a follow-up conversation when the Senate is back in session in late September.

"When you're there [at the border], serving, you're doing meaningful and productive things, but you also feel very helpless," Curtsinger said. "At the end of the day, you know it's a Band-Aid, in some ways. So we were very mindful of needing to make a systemic impact to the extent that we could, [and] we understand that to be through changing systems, and especially laws and regulations."

Sr. Sharon White, also a Sister of St. Joseph of Philadelphia, said partaking in this legislation blitz has also taught her the power of the two letters that precede her first name: Network frequently reminded the sisters to include the title "Sr." when signing petitions.

"We're sincere, we have respect, we're credible, and we have established that throughout our ministries in the U.S.," she said, adding their desire to live in "right relationship" with both the migrant neighbor and the politician sitting across the table. "It means something when sisters speak up, so we're trying." 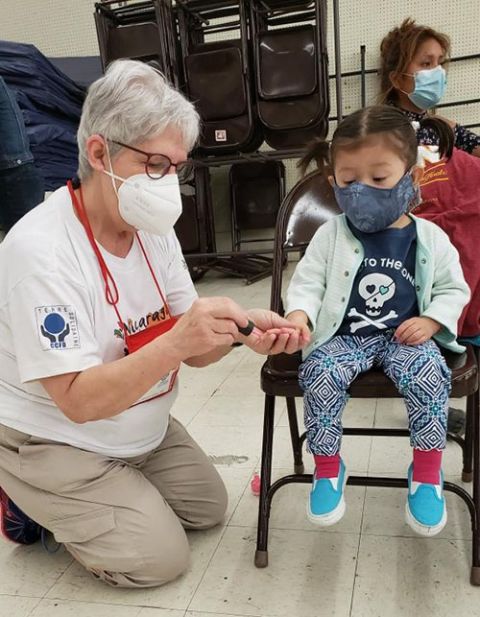 St. Joseph Sr. Sharon White paints the nails of a child at the Humanitarian Respite Center in McAllen, Texas. White said she felt the importance of affirming migrants' dignity with simple acts of kindness. (Courtesy of Sharon White)

White regularly sends emailed updates on this activism to nearly 50 people in her network, and she is optimistic that the interest can be multiplied across the country as sisters lean into their influence.

"Sisters have a lot of impact, we have a lot of contacts, so if this spreads to different states and sisters stand up, this will be wonderful," she said. "We'll keep it moving. ... The community and bond we formed — we want every state to be able to do that."

Building on their momentum, the U.S. Federation of the Sisters of St. Joseph hosted an informational virtual event Aug. 31, where sisters and activists (including Asirwatham and White) encouraged participants to join in their calls to action by signing petitions and donating to recommended border organizations.

For Network, educating swaths of sisters on the ins and outs of advocacy — policies to defend, email templates to share, developing relationships with the ultimate deciders — has been a somewhat new approach, Asirwatham said.

And that approach appears to be snowballing into a larger endeavor with more sisters in more states, she said.

"We can see the difference that it is making," Asirwatham said. "And we hope that more and more sisters would do this."

Cavanaugh said helping immigrants isn't limited to providing direct services on the border. When it comes to advocacy or long-distance accompaniment, "all of us can do something where we are, no matter what our ministry is," she said, before paraphrasing a famous lyric:

"Tyrants tremble, sick with fear at the thought of a Sister of St. Joseph with an iPad."

There is no 'other' because migration is an international concern