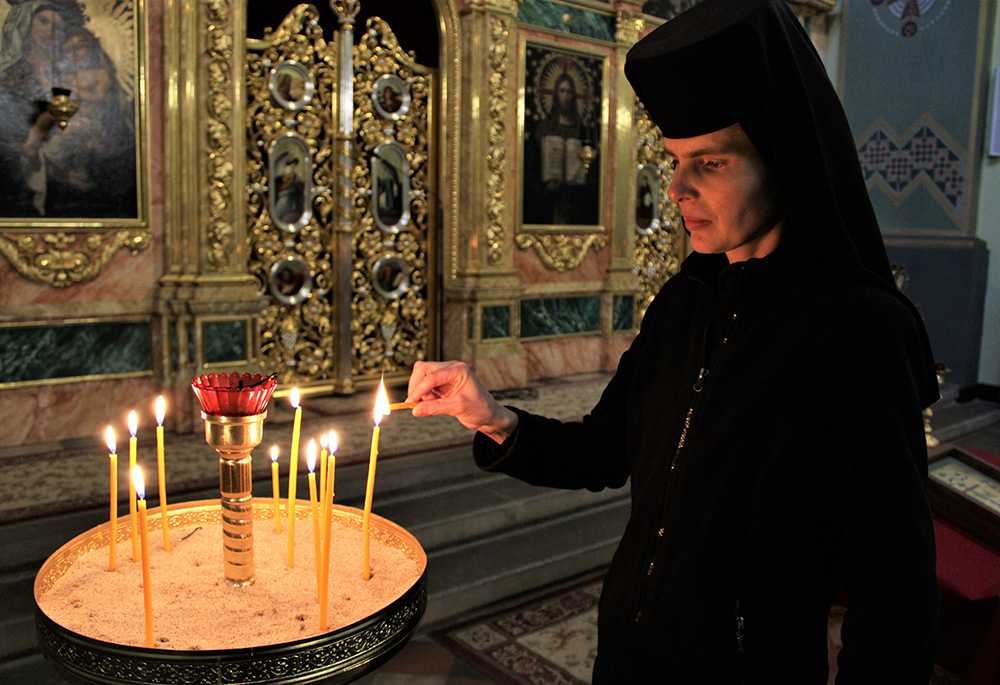 Sr. Evphrosynia Senyk, a member of the Congregation of the St. Joseph's Sisters of the Ukrainian Catholic Church, lights a candle in the sanctuary of the Greek Catholic Parish of the Exaltation of the Holy Cross, formerly the Church of St. Norbert, in Krakow, Poland. The Ukrainian church has become a haven for Ukrainians fleeing the war in Ukraine. (GSR photo/Chris Herlinger)

They arrive with searing memories: the bombing of schools, theaters and hospitals; unburied bodies in the street; children huddled with their mothers in crowded basements; rumors of Russian soldiers committing "assaults" against women, a common euphemism for rape.

In the face of such recollections, the new arrivals to Poland from Ukraine find comfort and hope, solace and strength in part at church, where they experience the rhythms of prayer and ancient rite, shared singing and Communion, the recitation of the Divine Liturgy in a common language, and even the familiar and bracing whiff of incense.

"It's precious because you've left something precious," said Sr. Evphrosynia Senyk, a member of the Congregation of the St. Joseph's Sisters of the Ukrainian Catholic Church. Senyk left Ukraine in early March with her sister and two other women because of the war. She is currently ministering at the Greek Catholic Parish of the Exaltation of the Holy Cross, formerly the Church of St. Norbert, not far from the city's old center.

Spending a few hours together on a Saturday afternoon or a Sunday morning to pray and experience solace and solidarity with fellow Ukrainians can feel like an act of healing in the context of the brutal Russian invasion of Ukraine that began Feb. 24. 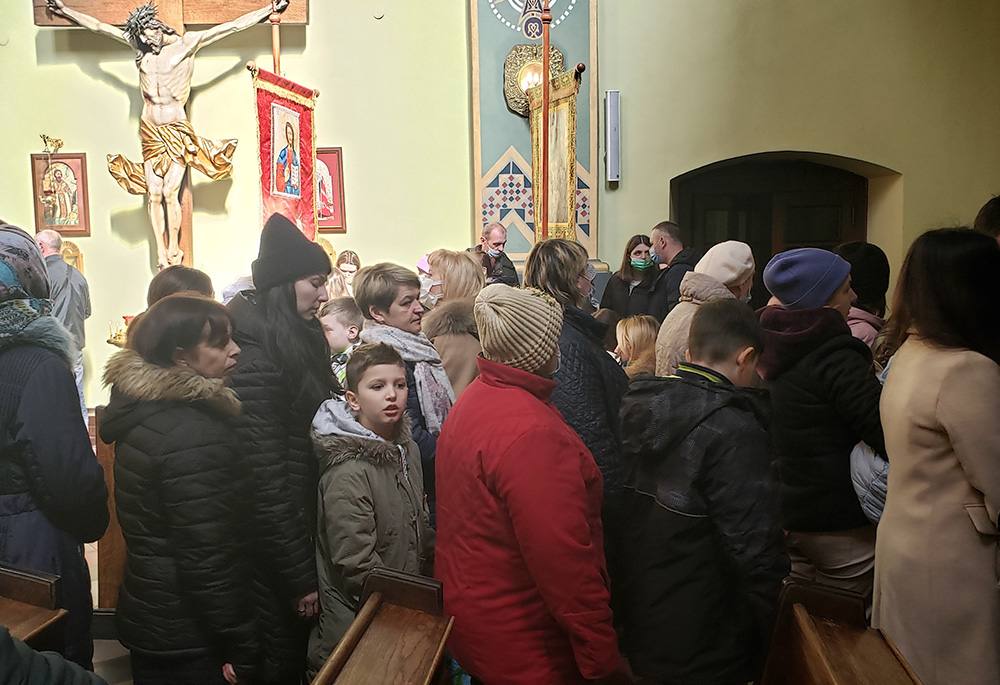 Parishioners exit a Sunday morning service March 13 at the Greek Catholic Parish of the Exaltation of the Holy Cross in Krakow, Poland. The church has become not only a place of worship but a locale where people fleeing the war in Ukraine come to seek news and contacts and to pick up donated food and clothing. (GSR photo/Chris Herlinger)

The war has forced over 10 million Ukrainians to leave their homes. More than 4 million Ukrainians have fled to neighboring countries, and of those, more than 2.3 million went to Poland, to Ukraine's immediate west. The new arrivals are joining about 630,000 Ukrainians already living and working in Poland who found job opportunities there before the war.

The Greek Catholic Parish of the Exaltation of the Holy Cross has become not only a place of worship but a locale where arrivals come to seek news and contacts and to pick up donated food and clothing.

"You feel good when everybody is supporting you," said Ludmyla Opanasuk, 45, who arrived in Krakow on March 8 with her sister-in-law and her 13-year-old son and has found a warm welcome at the church. "We feel grateful." 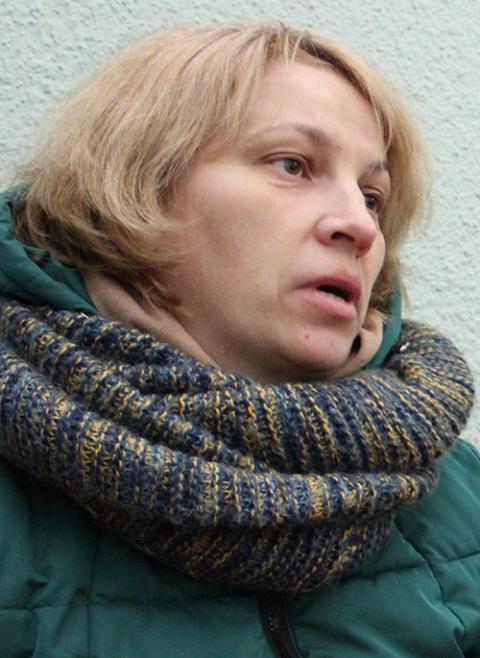 Ludmyla Opanasuk, 45, arrived in Krakow, Poland, on March 8 with her sister-in-law and her 13-year-old son and has found a warm welcome at the Greek Catholic Parish of the Exaltation of the Holy Cross in Krakow, Poland. (GSR photo/Chris Herlinger)

Though the family, who had lived outside the capital of Kyiv, were brought up in the Orthodox tradition — as are most Ukrainians — differences between Orthodox and Catholic traditions and theologies mean little right now, Opanasuk said. (The Krakow parish acknowledges Pope Francis as the head of the church but practices Byzantine liturgy similar to that in the Orthodox tradition.)

What is important to Opanasuk is that she and her family are safely in Krakow, living with a Polish-American couple who volunteered to take them in and finding some solace as they contemplate next moves and try to make sense of their fate — and their country's.

Opanasuk's 62-year-old sister-in-law, also named Ludmyla but hesitant to give her full name, said she feels enormous anger over the Russian invasion and being uprooted.

"Bitter," she said. "Bitter. We were afraid for our lives."

Yet being at the church — even for a few minutes during the week to pray, sit in quiet contemplation or have the chance to talk to Senyk and another sister — is a balm, the women say.

"It's a relief, pleasant," Ludmyla said. "The church gives us hope."

"We feel we are among brothers and sisters," Opanasuk added. However, she made clear that the family hopes their stay in Krakow is short and that the war in Ukraine will end quickly.

"Everybody wants to return home."

'Lightning and thunder in a clear sky'

The numbers of those coming to the Greek Catholic Parish of the Exaltation of the Holy Cross have increased greatly in weeks since the war began, said Fr. Peter Pawliszcse, one of two priests at the church. There were about 400 members or attendees at the church before February, a number that has increased by at least a 100 since.

One of the inspiring aspects of the church building itself — which dates from the first half of the 17th century and became property of Greek Catholics in 1808 — is its striking and rich artwork of its icons and front iconostasis.

Morning light streamed in and illuminated the art at a somber yet hopeful March 13 service at which the aisles were filled with standing attendees, the whiff of incense filled the air, and the rhythms of prayer and ancient rite declared hope and resurrection. A hymn sung in remembrance of the dead brought tears to both church members and visitors alike. 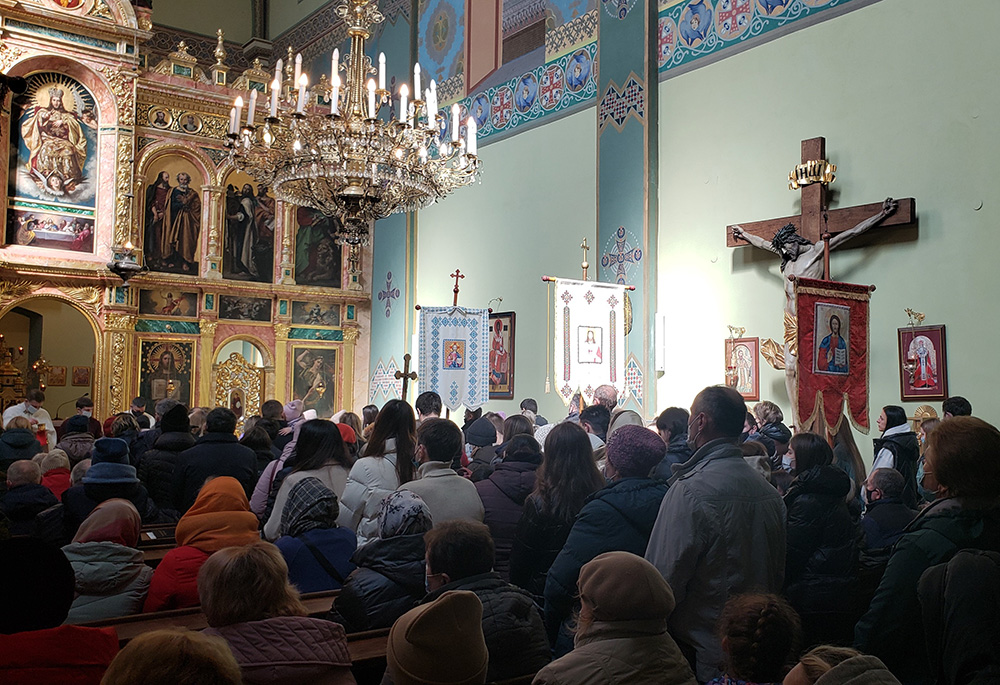 People stand in the aisles of the Greek Catholic Parish of the Exaltation of the Holy Cross in Krakow, Poland, during a March 13 service. The numbers attending the services have increased greatly in weeks since the war in Ukraine began Feb. 24, said Fr. Peter Pawliszcse. (GSR photo/Chris Herlinger)

Pawliszcse briefly spoke in English, thanking British donors who drove from Spain with a supply of medicines to help refugees still arriving at the Polish-Ukrainian border.

In an interview, Pawliszcse said those arriving in Krakow "are depressed; they don't recognize fully what has happened. This event is shocking, that this happened in 21st century Europe. People thought this kind of war was something in the past, behind us." 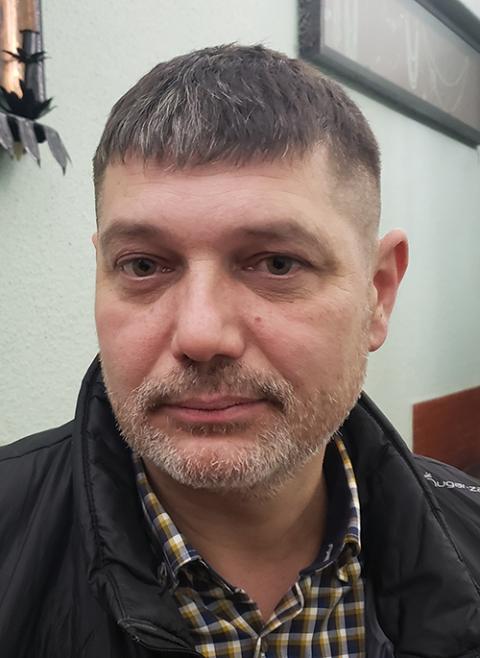 Fr. Peter Pawliszcse, one of two priests at the Greek Catholic Parish of the Exaltation of the Holy Cross in Krakow, Poland. There were about 400 members or attendees at the church before February, a number that has increased by at least a 100 since. He says: "This has been a very stressful time for everyone." (GSR photo/Chris Herlinger)

Asked how he was doing, Pawliszcse smiled wanly and said, "I'm good, yes, but this has been a very stressful time for everyone."

Sr. Lubomira Chaban, 64, another Ukrainian St. Joseph's sister who has worked in Krakow since 2011, is doing "all that is needed" to help both new arrivals and established church members.

For the longtime church staff member, that includes cleaning the church, teaching catechism, serving "as a bridge of communication between the priests and the people," and welcoming guests and refugees.

"People are asking for spiritual help," she said.

She echoed what Pawliszcse said about arrivals struggling with the enormity of what has happened to them and their families.

"This has been like lightning and thunder in a clear sky," she said.

Chaban said she and longtime Ukrainian residents in Krakow "did not expect events would go this way," and they are still staggered by the unfolding tragedy in their native country.

But the unity among the arrivals and the established Ukrainians in Krakow is real and palpable, she said, because all feel the war's menace.

"They are glad to be here, far from hell," she said. 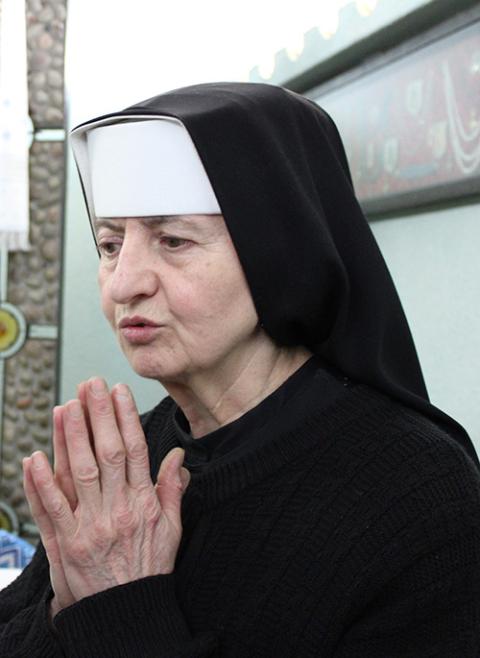 Sr. Lubomira Chaban, 64, a Ukrainian St. Joseph's sister who has worked in Krakow, Poland, since 2011, is doing "all that is needed" to help both new arrivals and established church members. (GSR photo/Chris Herlinger)

Both Chaban and Senyk noted that while most Ukrainians are Orthodox Christians, the new arrivals feel accepted at the Catholic parish thanks to the warm welcome they receive and good word-of-mouth in the refugee community.

"They feel this is a kind of home for them," Senyk said.

Chaban said she derives her own spiritual strength from contemplation and prayer, particularly in a small chapel within the church where a tabernacle rests.

"When we hear stories of bombings and the experiences people have had, we want to share the peace of this church with them," she said.

Senyk, a native of Chernelytsia in the Ivano-Frankivsk region in western Ukraine, said the church offers her solace, too. Her congregation has a convent in the border city of Lviv, and her three-day journey by bus and train to arrive in Krakow on March 6 was arduous and tiring.

Senyk's eventual goal is to return to her congregation's health and nursing-home mission in Saskatoon, Canada, where she worked from 2019 to 2021 before returning to Ukraine because Canadian officials did not extend her visa.

But for now, she is happy to be in Krakow, working among fellow Ukrainians. 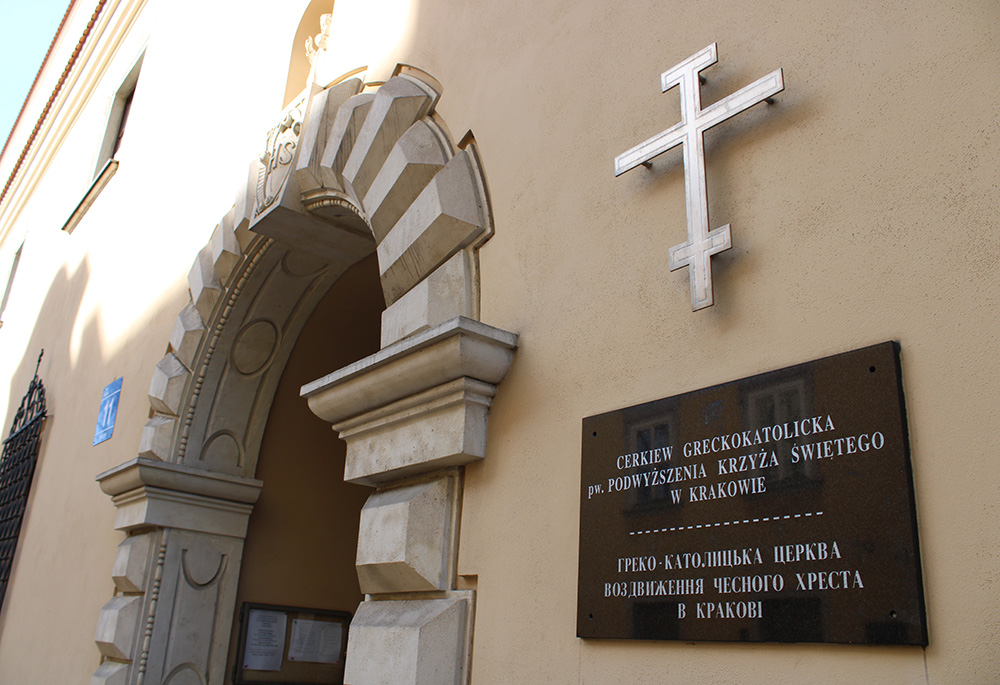 Senyk said she is not surprised by the new arrivals' desire to embrace peace and not hatred, though she acknowledged that lingering bitterness is understandable.

"The refugees are seeking God's peace," she said, "and they are hoping that peace in Ukraine will come soon."

As is Senyk, who said she is praying for Russia and its people because they are being blinded by government lies.

She is confident Ukraine will ultimately preserve its independence, declaring: "We will win."