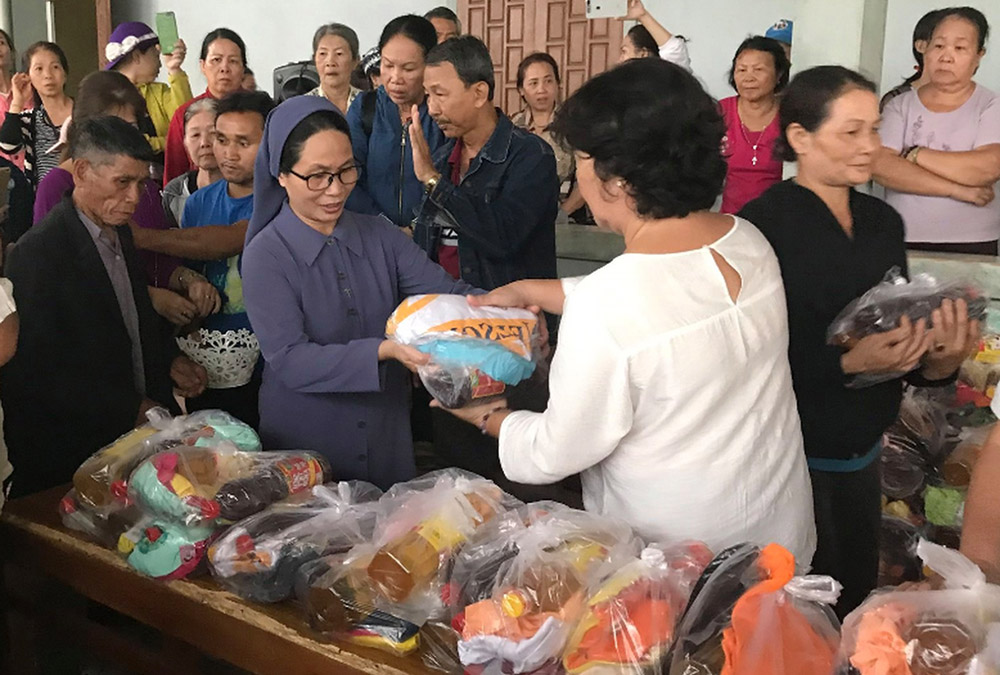 Sr. Maria Goretti Le Thi Van Anh of the Lovers of the Holy Cross gives gifts to people in need to celebrate the Tet festival Feb. 4 in Vietnam. (Joachim Pham)

Every day for the last four months, Duong Thi Mong has carried food, pots, dishes and other utensils on her shoulders to walk nearly 5 kilometers daily from her house to a nearby village, where she serves com hen (rice mixed with mussel, a popular traditional dish) to local people on streets of Thua Thien Hue province.

Mong, a Buddhist from Hue's Vi Da ward in central Vietnam, which is famous for its mussels, said she usually takes her boat to carry food over the Huong River then walks only 600 meters to her destination. However, her boat was wiped out in severe flooding after six tropical storms hit the central provinces in October and November.

The 56-year-old mother of two said she earns 80,000 to 100,000 dong ($3.50 to $4.30) per day to support her family, not enough money to buy a new boat. She said she had to work harder and sell food at night to get money to prepare food for the celebration of Tet, or Lunar New Year. Local markets closed for the weeklong traditional festival Feb. 10 ahead of the New Year, which starts Feb. 12.

Thankfully, sisters across Vietnam have stepped in to help Mong and others like her. 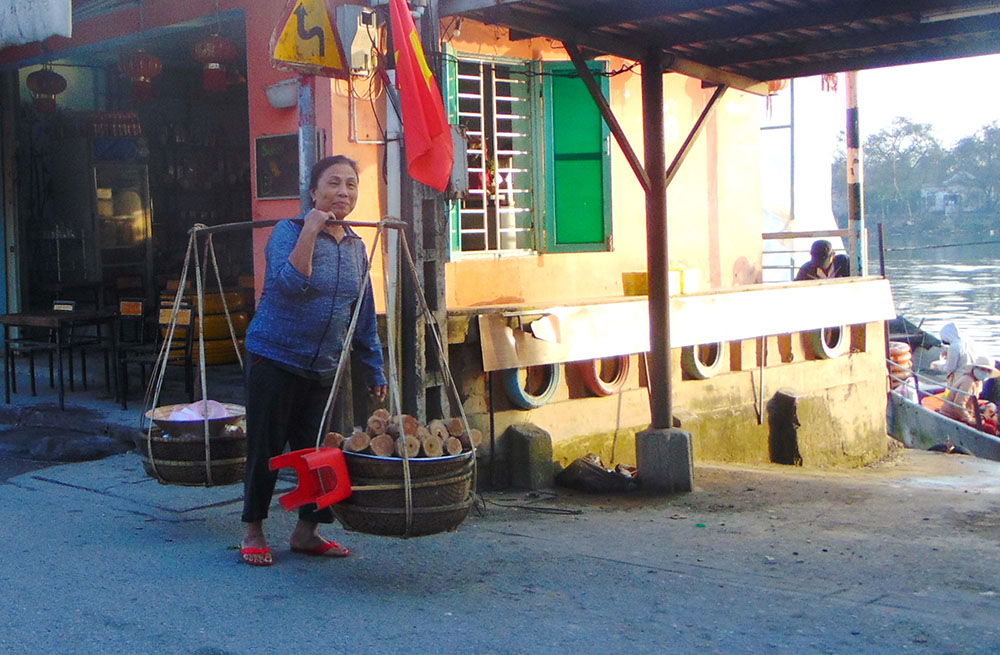 Duong Thi Mong carries food, pots, dishes and other utensils on her shoulders to sell for a living Feb. 2. She made the journey by boat until her boat was destroyed in the tropical storms that hit central Vietnam in October and November. (Joachim Pham)

"I am excited for the nuns who offered me 10 million dong [$435] on Jan. 28. I will use the money to buy a new boat for my work soon," Mong said cheerfully, adding that the boat is really a lifeboat that will help save her energy so she can work longer and earn more money to put food on the table.

Sr. Maria Truong Thi Minh Yen of the Daughters of Mary Immaculate said her community provided boats for 12 people who lost their boats during the severe floods that left many people nothing in their wake.

Yen, who serves Tan Thuy Parish, said she called on benefactors for donations.

"We do want to provide local flood victims with longer-term help so that they can stand on their own feet and return to normal life soon," she said.

Many victims do not have enough money to be able to purchase basic means of doing their jobs. The 69-year-old nun said her convent gives clothes, blankets, rice and medicine to more than 100 street people, migrants, boat people and slum dwellers on a regular basis. Many live in makeshift shelters while others stay in low-rent, stuffy lodgings as their properties were washed away by flooding.

"They have suffered much from the last natural disasters and the chilly weather this year," Yen said. The temperature fell to 10 degrees Celsius (50 degrees Fahrenheit) in January in the tropical area. 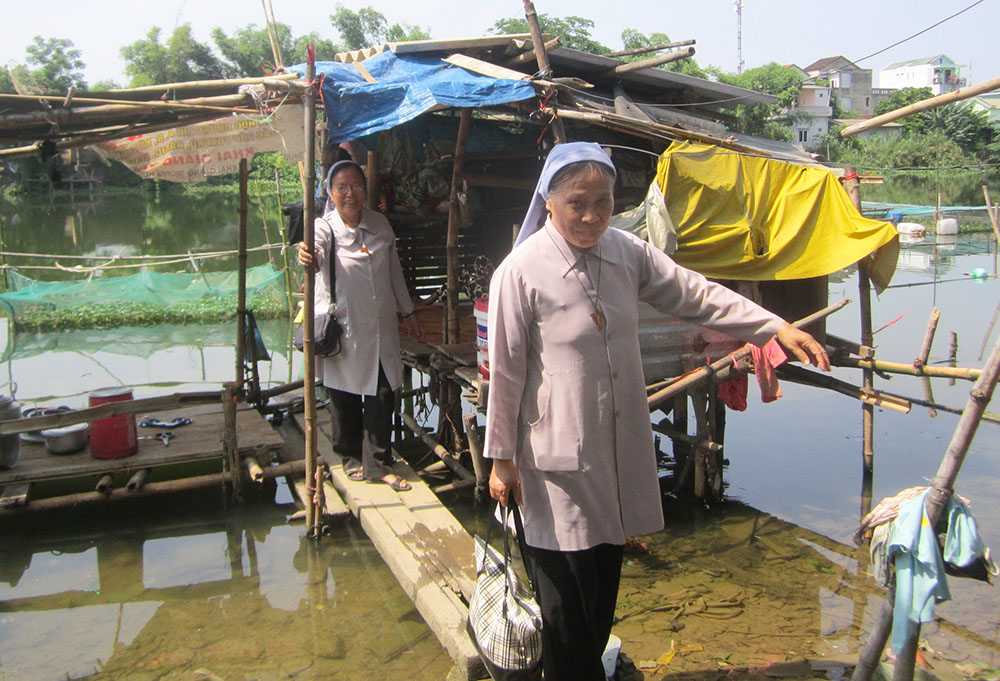 Sr. Maria Truong Thi Minh Yen, right, and another sister from the Daughters of Mary Immaculate visit a family living in a shelter on the Huong River Jan. 31. (Joachim Pham)

"We plan to offer them necessary finance to do small business, buy tricycles, and raise cattle and poultry for a living," she said, adding that students will be given school things while those with health problems will be provided with free treatment.

Luong The Thien from Phu Hiep ward said he built a new house in January after he received 65 million dong from the Daughters of Mary Immaculate. His old 40-square-meter house was damaged in the floods.

Thien, a 54-year-old Buddhist, said he could not afford to rebuild his house as he works as a motorbike taxi driver to support his wife, who has lung cancer, and three children.

"We are happy to celebrate the Tet festival in the dream house. We are extremely grateful for the nuns' generous help that benefits our life long-term," he said, adding that according to tradition, people cannot be well-established in their careers until they have stable homes.

Thien said he has had a good relationship with the nuns since he took a nun from a local hospital to her convent in 2008. The nuns regularly visit his family, and his children receive a monthly scholarship from them.

Nguyen The Thieu, a Buddhist from Cau Nhi village, said he is among seven local families who received money to repair their storm-damaged houses. His Catholic son-in-law introduced him to the nuns.

"We have received humanitarian aid seven times from sisters and Catholic benefactors, and we gradually overcame the hard times," the 78-year-old father of four said.

Sr. Maria Nguyen Thi Hong of the Daughters of Our Lady of the Visitation, who serves Nam Dong Parish, said the nuns offer 60 local ethnic Co Tu and Kinh families money to buy pigs and chicken to raise and fertilizers to cultivate their crops. Local people lost all their crops, poultry and cattle during the floods and now have to collect firewood and bamboo shoots for a living.

On Jan. 23, the nuns provided bicycles for 23 students in Nam Dong Parish who walk 5 kilometers to school. 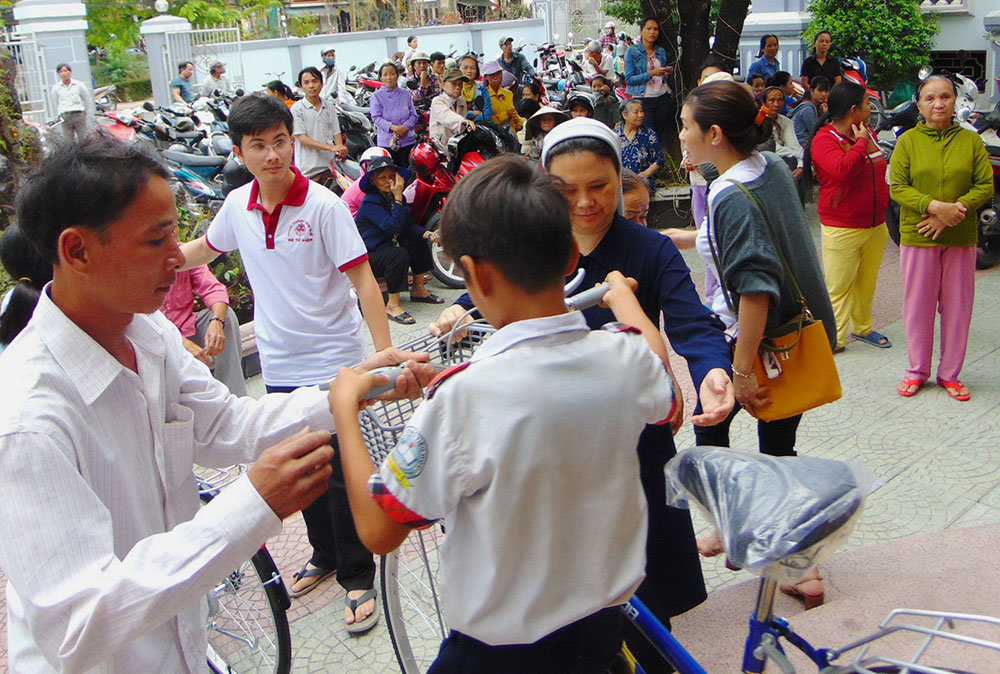 Sr. Maria Nguyen Thi Hong of the Daughters of Our Lady of the Visitation offers a bike to a student in Hue, Vietnam. (Joachim Pham)

"Our long-term goals are to help students maintain their studies and to create favorable conditions for their families to improve their life long-term in the aftermath of the disasters," said Hong, head of the local eight-member convent.

On Feb. 4, Lovers of the Holy Cross sisters and volunteers offered 150 gifts, including rice, oil for cooking, fish sauce, sugar, cake, shoes and clothes for the needy to celebrate the Tet festival. Each gift cost 300,000 dong and came from donations. The sisters also offered 1 million dong each to 13 students whose blind parents sell lottery tickets for a living.

The Lovers of the Holy Cross sisters' beneficiaries include porters, workers, elderly people without relatives, farmers and daily earners who became unemployed by a new wave of the coronavirus outbreak that began Jan. 27 in the two northern provinces of Hai Duong and Quang Ninh, ending a nearly two-month run without a domestic case. The outbreak has infected 470 people in at least 12 cities and provinces.

"We would like to share basic food with people in need as a way to comfort them and help them celebrate the Tet festival," Lovers of the Holy Cross Sr. Maria Goretti Le Thi Van Anh said.

According to tradition, she added, people who have enough food for the Lunar New Year holidays will live in comfort in the rest of the year. The new year is the year of the buffalo, which represents hard work and calm.