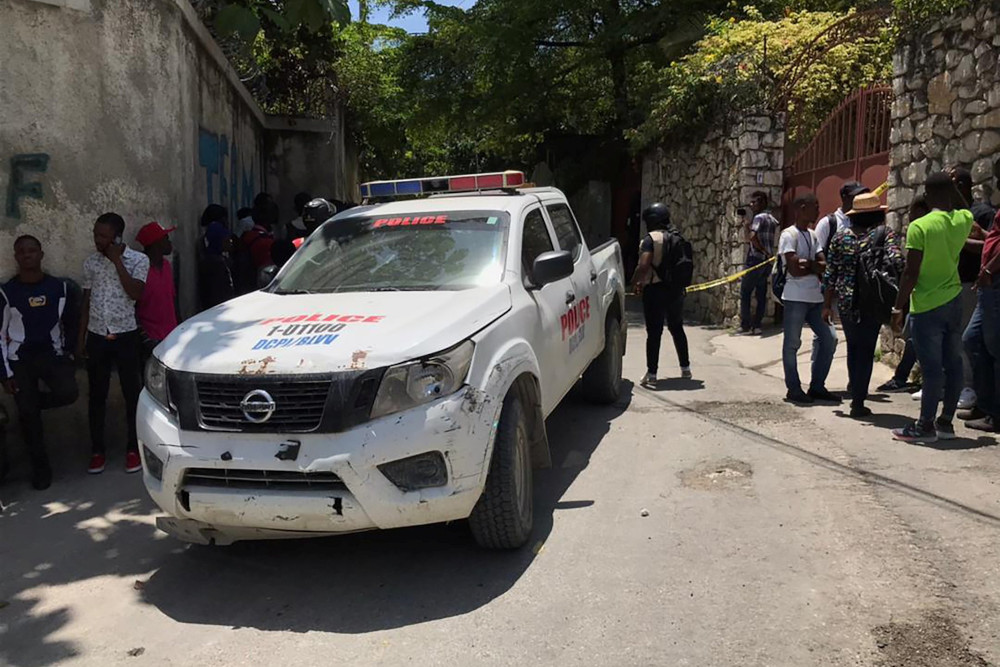 People stand next to a police car and a yellow police cordon near the residence of Haitian President Jovenel Moïse near Port-au-Prince July 7. The president was assassinated in an early morning attack at his home, the prime minister said. (CNS/Reuters/Estailove St-Val)

Catholic sisters advocating for an end to violence in Haiti say they were shocked by the July 7 assassination of Haitian President Jovenel Moïse but that their immediate worry is how the murder might plunge the beleaguered nation into further turmoil.

They also say that the assassination does not change their belief that the Moïse government was an impediment to human rights, and that the killing has to be seen in the context of intolerable levels of violence that have embroiled the Caribbean nation in recent years.

"Was I shocked?" Yes," said Sr. Barbara Bozak, coordinator of the United Nations' work of the Congregations of St. Joseph. "But not totally. There's been so much disarray in the country."

"The reality of violence still stands," said Sr. Teresa Kotturan, who represents the Sisters of Charity Federation at the United Nations. "Nothing has changed because of this killing," she added — a reference to the ongoing political and social turmoil in Haiti, including gang violence, that affects day-to-day life.

Dawn Colapietro, a lay missionary for the Sisters of Charity of St. Elizabeth in New Jersey and who has long experience in Haiti, said the reaction among her friends and colleagues in Haiti is fear and uncertainty.

"I hear it in people's voices," she said on July 8 of recent phone conversations. "Like, 'How much more can we take?' " One friend told Colapietro that prices for food and water skyrocketed in the past day. "I'm sure people woke up today and said, "Do I have enough beans and rice for my family?"

Following the killing, Interim Prime Minister Claude Joseph ordered a "state of siege" in the country. Four people died in a late July 7 shootout with police, with officials describing the dead as suspected assailants, The New York Times reported. The newspaper also reported that the prime minister said efforts continue to find those he called "mercenaries" responsible for Moïse's assassination.

Details of the murder of Haiti's 58th president — which occurred at the president's private residence on the outskirts of the Haitian capital of Port-au-Prince — remained sketchy and officials did not detail who the suspected killers were.

Haiti has a long history of political turmoil, with numerous coups and foreign interventions, especially by the United States. As The Washington Post reported, the last time a Haiti president was assassinated was in 1915, and resulting violence prompted an U.S. invasion ordered by President Woodrow Wilson.

U.S. Marines stayed in Haiti until 1934, though U.S. influence and domination have been key factors in Haiti's history, including U.S. support for the governments of dictators Francois "Papa Doc" Duvalier and his son, Jean-Claude. 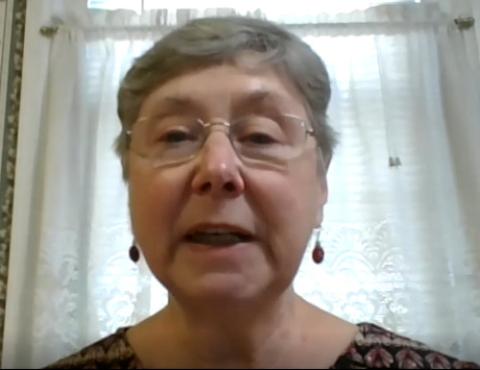 Sr. Barbara Bozak during a June 24 webinar on the situation in Haiti. Bozak is coordinator of the United Nations' work of the Congregations of St. Joseph. (Photo courtesy of the Justice Coalition of Religious)

Concern for the current human rights situation in Haiti has prompted involvement by Bozak, Kotturan and other sisters and laity as part of the Justice Coalition of Religious, a global advocacy effort of female and male religious based at the United Nations.

In recent months, the coalition has tried to focus international attention on the deteriorating situation in Haiti, saying the country was in desperate straits, imperiled by violence "on all levels."

Their efforts were prompted by threats to church personnel and mission partners in Haiti and by frustration that, up until the assassination, worsening conditions in Haiti had not received sufficient international media attention.

One of the coalition's earliest actions was to send a letter earlier this year to Linda Thomas-Greenfield, the U.S. Ambassador to the United Nations.

"People are living with the constant threat of random acts of violence — daily kidnappings, killings, rapes, and other forms of intimidation," the coalition said in an April 29 letter to Thomas-Greenfield. "They are avoiding traversing the streets — even to attend to daily needs — for fear that they will not return home alive."

The letter added: "There is no protection for citizens and no real governance of the country," noting that because of the lack of a functioning parliament "dictatorial rule by decree" has become the norm, with "closure of the judiciary and tribunals, and rampant police corruption" contributing to the crisis. "No one is working for the safety and well-being of the people."

"Haiti is in a state of utter chaos, the trajectory of which the Archdiocese of Port-au-Prince has described as 'a descent into hell.' ''

Such uncertainty could worsen in the coming days, with a political vacuum at the top — Joseph's position is as interim only, and it is not clear who will ultimately take the reins of the country's political leadership. Ariel Henry, who was appointed by Moïse just days ago to be the next prime minister, said Thursday he should head the next government.

"If you were frightened before, you're even more frightened now," Colapietro said. "With nobody there (as president), tensions have nudged up from zero to 10 overnight."

Friends have told Colapietro that Haitians are saddened and shaken by a political assassination and what it portends for the country, though few are mourning Moïse personally. "No one 'is crying' for Moïse," Colapietro said of her Haitian friends and colleagues' reactions.

The president's popularity had plummeted since he became president in 2017, and protests since have centered on what critics said was an attempt at an authoritarian power grab.

Recent reports had alleged that the Moïse government was using gangs to intimidate government opponents. 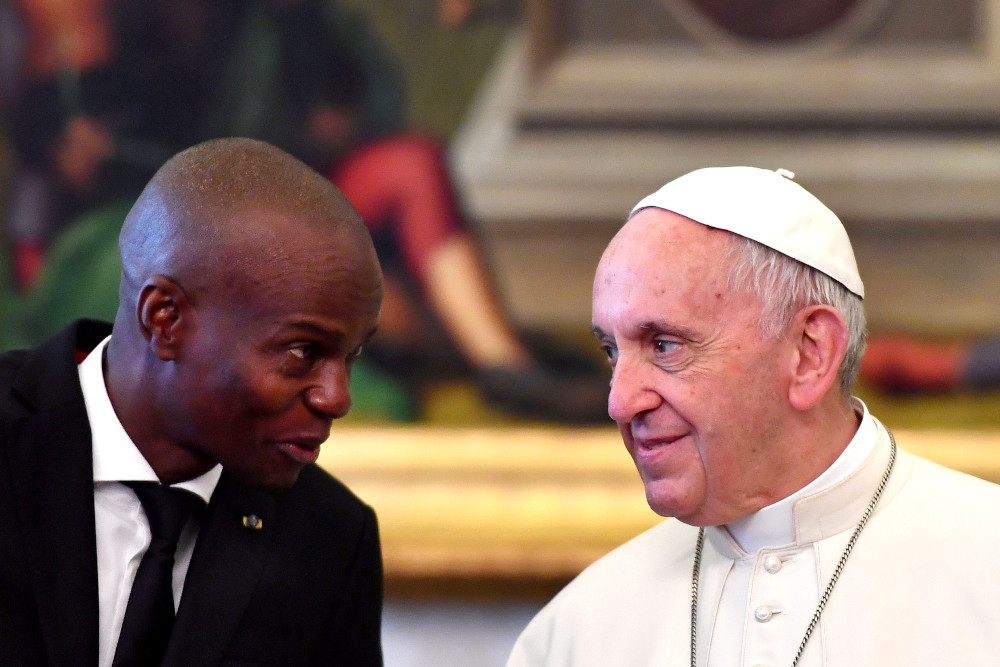 Pope Francis talks with Haitian President Jovenel Moïse during a private audience at the Vatican Jan. 26, 2018. (CNS/pool via Reuters/Alberto Pizzoli)

"President Moïse's rule has become increasingly authoritarian and has turned to repression to quell dissent," the report said, saying the government has used gangs for its own purposes. It looked specifically at three attacks that occurred between 2018-2020, in which it said at least 240 civilians were killed and hundreds of homes damaged.

"The attacks show an alarming pattern of state involvement," the report said. Evidence suggests that senior government officials in Moïse's administration have planned, provided resources for, and solicited attacks against civilians. Police resources were used in all three attacks, and police officers directly participated in the attacks alongside gang members."

In an interview with the PBS NewsHour that appeared June 2, Bocchit Edmond, Haiti's ambassador to the United States, defended the Moïse administration, saying "There is no dictatorship in Haiti" and that most of the country "is quite safe."

Edmond said the current crisis is due to "many years of bad governance" and that "the Moise administration now today has inherited that."

A new administration will have another set of challenges to meet, and the sisters and lay advocates say respect for human rights should take priority.

While acknowledging the tragedy of the assassination, Bozak and the others say the criticism of Moïse's record on human rights remains legitimate. "My criticism is exactly what it was two weeks ago," Bozak said in an interview July 7.

She said she and others are worried about a possible crackdown on those who have raised the issue of human rights violations in Haiti. "In a 'state of siege,' there is always fear of illegal searches and government crackdowns," she said.

In addition to advocating for human rights and an end to violence, sisters should also affirm Haiti privately and collectively, said Adrian Dominican Sr. Dursyne "Dusty" Farnan, who represents Dominican sisters on the Justice Coalition.

"We need to pray for the country, and hold Haitians up in prayer," Farnan said of this fragile moment in Haitian history. "It's the most we can do."

That and continue to hope for better days ahead, so that day-to-day life in Haiti improves. "Where do you start in a situation like this?" Bozak said.

Colapietro said Haitians she knows are just worn out.

"They say, 'We don't care who is in office. We just want safety, enough to eat, the chance to work, go to school and go to the doctor,' " she said. "But as it is now, no one is in control and people feel very vulnerable."