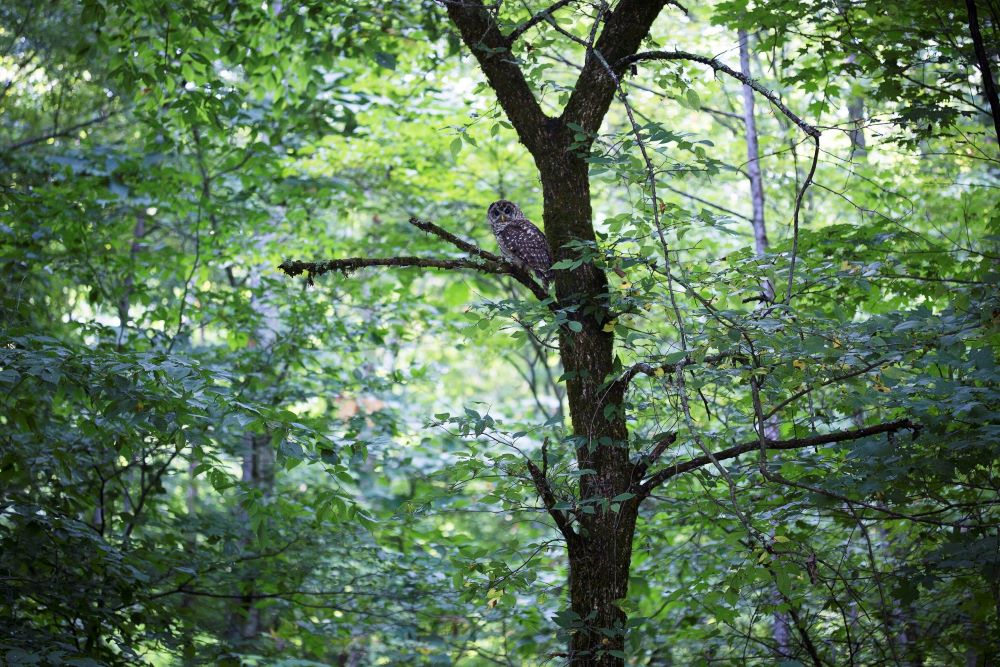 An owl rests on a tree branch in a forest in Kermit, West Virginia. (CNS/Tyler Orsburn)

The Congregation of Sisters of Bon Secours announced Oct. 4 that it has accepted the Vatican's invitation to participate in the Laudato Si' Action Platform, the seven-year initiative to take concrete steps toward an environmentally sustainable future.

"Over these next seven years the Congregation of Bon Secours hopes to be part of the critical mass needed to create a global paradigm shift which is nothing short of a transformation of our relationship with Earth and all who share our common home," the congregation said in its announcement about joining the grassroots campaign to put Pope Francis' 2015 encyclical, "Laudato Si', on Care for Our Common Home," into action.

"In the coming year, in collaboration with the Bon Secours Family, we will assess what we are already doing to address the goals of Laudato Si', dream of what more could be possible and design a plan that will enable us to more fully realize this vision of Pope Francis' encyclical over the next seven years."

"Impelled by the Holy Spirit and renewed by the fire of our original call, we, women of audacious hope, commit ourselves to boldly live our charism of compassion, healing and liberation with those in our Bon Secours Family as we address the seven Laudato Si' Action Platform goals," the congregation said.

The full launch of the initiative to implement Laudato Si', originally planned for Oct. 4, will take place in mid-November, the Vatican recently announced.

The Congregation of Sisters of Bon Secours is an international congregation of women religious serving in the Democratic Republic of Congo, France, Great Britain, Ireland, Peru and the United States.

After more than four decades in leadership, Sr. Janet Eisner will retire in 2022, Emmanuel College in Boston announced Oct. 4.

Eisner, a Sister of Notre Dame de Namur, has served as president of the small liberal arts college in Boston's Fenway neighborhood since 1979. The college says Eisner is the nation's longest-serving female college president.

"It is the privilege of my life to collaborate with countless faculty, administrators, staff, students, alumni, peers and friends to advance the vibrancy of Emmanuel's Catholic educational mission," Eisner said in a statement.

"Now, as we emerge from the pandemic, I believe it is time for new leadership to build on the momentum of these past decades, and to move Emmanuel forward in its second century," she said. The college was founded in 1919. 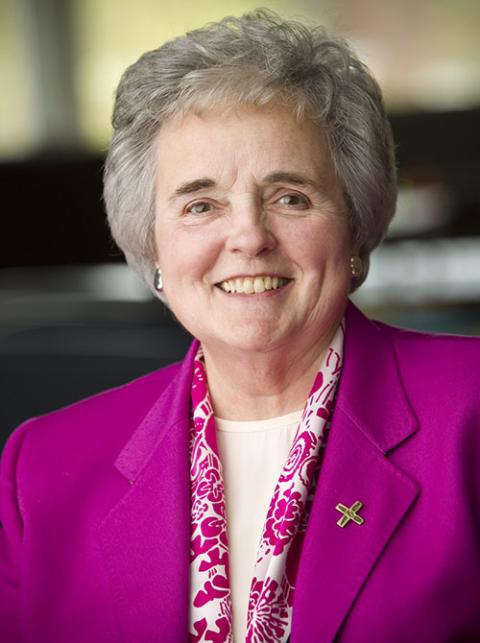 Eisner said while she remains focused on key strategic priorities in the year ahead, she looks forward to "proclaiming the great story of Emmanuel College this year and after I leave office — indeed for all my days."

She added: "When I was inaugurated President of Emmanuel in 1979, I did not know where that path would lead. I did know that, as a Sister of Notre Dame de Namur, I was part of a larger mission to make known God's goodness and to educate young people for life.

"That dual commitment captured my whole being then, and it continues today. I am so grateful to be doing what I love, and I know that, now as ever, the future is in our name — Emmanuel, our God with us."

Margaret McKenna, who chairs the college's board of trustees, praised Eisner's four decades of leadership in a press release.

"Sister Janet has navigated a strategic and successful course for Emmanuel College in times of seismic change in American higher education. She is the second founder in every sense of the word," McKenna said.

"Throughout her tenure, her creativity and talent for reinvention have earned her the respect of business, university and church leaders throughout our city and far beyond — along with the affection of Emmanuel's worldwide family," she added.

Related: How a longtime Catholic college president is navigating the pandemic

In a December profile for Global Sisters Report, Eisner said 2020 was the toughest year she had to navigate as president because of the challenges the pandemic posed. But she remained optimistic about the college's future.

"We've never been through a pandemic," Eisner said. "My predecessors went through one, because they opened the college in 1919, but they opened it, so they were courageous. How could we be less?" 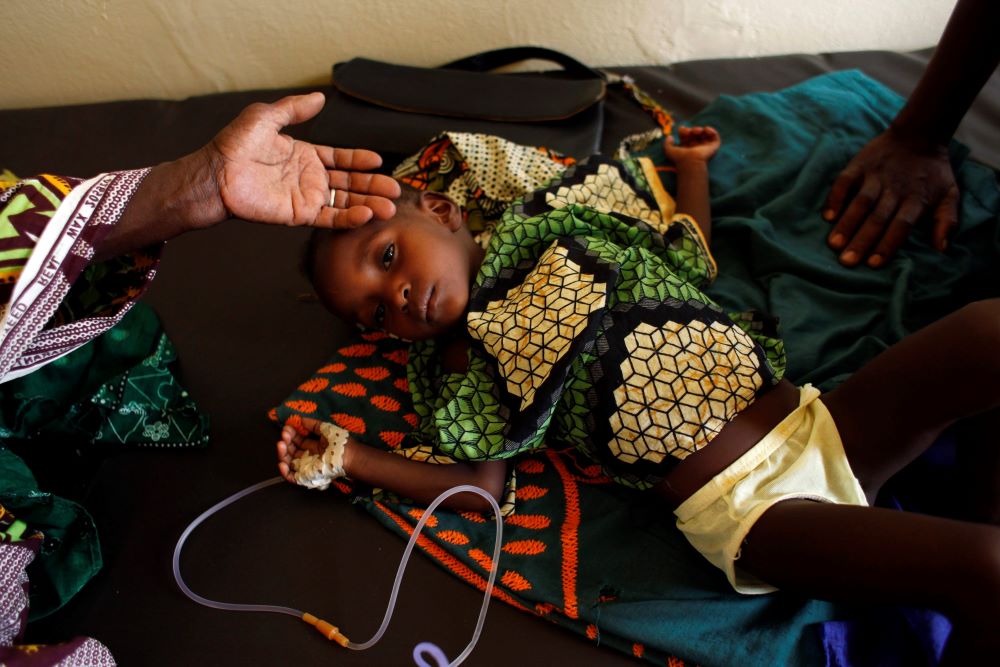 Two-year-old Aissata Dia is treated for malnutrition and malaria June 3, 2012, at a nutrition center run by the aid group Action Against Hunger in the Guidimakha region of Mauritania. The World Health Organization has recommended the use of a groundbreaking malaria vaccine for the disease that kills as many as 400,000 people a year, most of them children in sub-Saharan Africa. (CNS/Reuters/Susana Vera)

The World Health Organization has recommended the use of a groundbreaking malaria vaccine, a possible boon for those seeking to end the decimating effects of a disease that kills as many as 400,000 people a year, most of them children in sub-Saharan Africa.

"The long-awaited malaria vaccine for children is a breakthrough for science, child health and malaria control," Tedros Adhanom Ghebreyesus, WHO director-general, said in an Oct. 6 statement announcing the success of the vaccine.

"Using this vaccine on top of existing tools to prevent malaria could save tens of thousands of young lives each year," he said of the vaccine, which has been tested in a WHO pilot program that has reached more than 800,000 children since 2019 with the help of health partners in Ghana, Kenya and Malawi, UN News reported.

Thousands of Catholic sisters in Africa work in health care ministries that respond to malaria cases.

Tedros said the global health community has made "incredible progress" fighting malaria: Deaths from the parasite-driven disease have been reduced by more than half since 2000, the U.N. news agency said. In many parts of the world, malaria has been eliminated, Tedros said.

But the spread of the disease continues to be a global challenge, with as many as 200 million cases a year, with two-thirds of malaria-caused deaths afflicting children under age 5 in Africa.

"The malaria parasite is mostly transmitted by infective mosquitoes and carried in the blood, after being bitten. It is not contagious person-to-person, and symptoms include a fever of flu-like illness, nausea and vomiting, and if left untreated, it can be fatal," UN News reported.

Baltimore-based Catholic Relief Services was among those lauding the WHO recommendation.

"This is a historic moment in the fight against malaria," Suzanne Van Hulle, global malaria adviser for CRS, said in a statement. "The RTS,S vaccine represents decades of hard work and the potential to save the lives of thousands of children in sub-Saharan Africa."