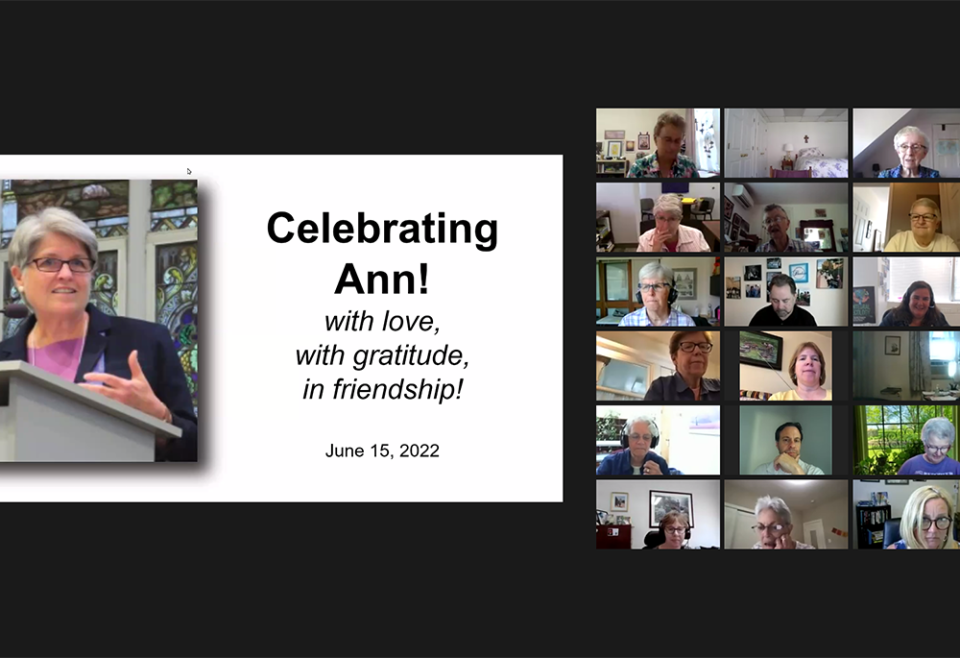 A celebration and farewell for Sr. Ann Scholz was held June 15 by the Justice, Peace and Integrity of Creation promotors of women religious congregations. Scholz is leaving her position as associate director for social mission for the Leadership Conference of Women Religious on June 30. Scholz of the School Sisters of Notre Dame, has served in the position since 2011. (GSR Screenshot/Gail DeGeorge)

It's election season at the Leadership Conference of Women Religious, and three candidates have made themselves available for election to the group's triumvirate presidency.

LCWR members should have already received a link to the ballots via email from the LCWR national office; voting closes June 24. The results of LCWR elections are usually announced a few days after voting ends, and the winning candidate is installed at end of the General Assembly, which this year is Aug. 9-12 in St. Louis.

In other LCWR news, Sr. Ann Scholz is leaving her position as associate director for social mission on June 30. Scholz, of the School Sisters of Notre Dame, has served in the position since 2011.

As Scholz leaves, LCWR will adjust positions in the national office, creating the associate director for transformative justice, as well as a coordinator of the Laudato Si' Action Platform.

Sacred Heart Sr. Bridget Bearss will serve beginning July 1 as the interim LSAP coordinator until a permanent coordinator is hired; she assumes the transformative justice position on Sept. 1.

LCWR Executive Director Sr. Carol Zinn wrote in an email announcing the changes that the change in title from "social mission" to "transformative justice" reflects the group's efforts to reimagine its work.

"The term 'transformative justice' captures the belief that the most effective ways we as women religious can respond to the suffering of this fractured world is at the intersection of contemplation, action, and being a presence of love and communion," Zinn wrote. "We look forward to the ongoing discernment with the LCWR membership as to how LCWR can evolve this position in new and creative ways to best serve its members' needs in this area."

Bearss is currently the executive director of the Stuart Center for Mission in Washington, D.C., and is an educator, artist, writer, activist and facilitator. She has worked as a teacher, principal, dean, and head of school, and holds a bachelor of arts degree in education from Maryville University and a masters of education degree in educational policies and leadership from Washington University. 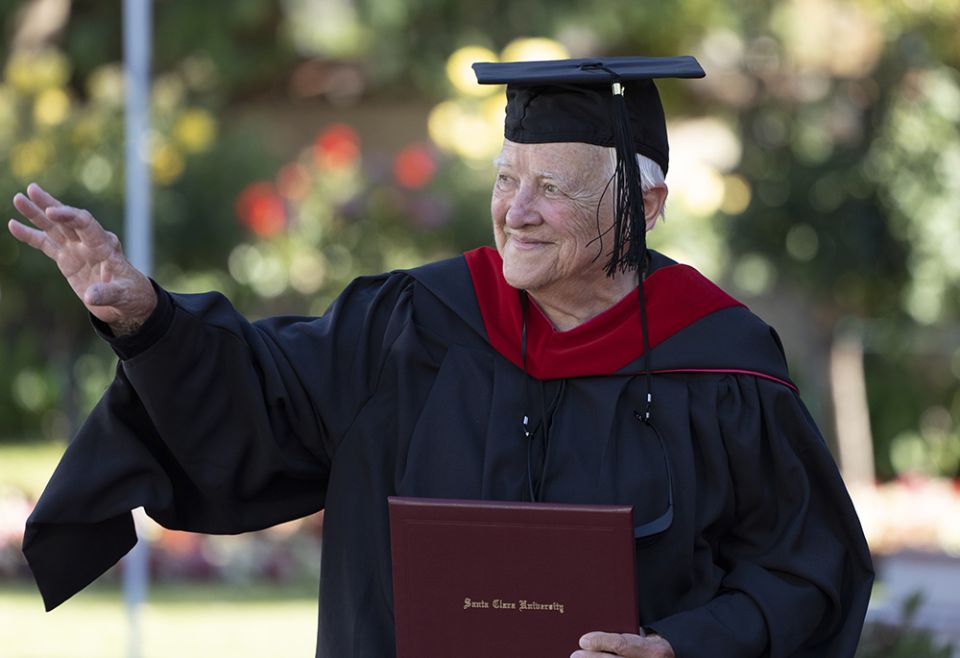 It is also graduation season, and Sacred Heart Sr. Judith Roach, is among those with a new diploma as she received her master's degree in pastoral ministry on June 11 from Santa Clara University.

"The whole attitude of aging is archaic," she said in a press release from the U.S.-Canada Province of the Religious of the Sacred Heart. "I wish everyone my age would take on a new field that they want to learn about and do it."

Roach began working toward the degree in 2017 and endured the setbacks and limitations of the coronavirus pandemic, and also lost several family members during her studies.

She entered her congregation pre-Vatican II and most of her theological background was rooted in that time period. She wanted to update her understanding to help her better serve her parish as a sacristan and the wider community. Her studies made her more familiar with scripture and how to better study it, be more in touch with her religion, and gave her a better appreciation for all religions. "This program really opened me up to the fact that we are all beings loved by God, and that we are all one," she said in the press release.

Roach has a background in elementary education, having worked in both public and private schools, spent more than a decade volunteering with, and ministering to, those in juvenile detention, and several years serving with the Soboba Band of Luiseno Indians at the Soboba Indian Reservation in Riverside County, California.

Sisters of Charity of Nazareth mark 200 years at Kentucky location

The Sisters of Charity of Nazareth are celebrating a significant anniversary this month: 200 years at their location near Bardstown, Kentucky.

The order was formed in 1812 and called a log house — which is still standing — home for 10 years. Then in 1821, the sisters learned that though they had spent all their money building a one-room school and turning the log house into a convent, they did not own the land and could not buy it.

Then a wealthy woman from Baltimore joined the congregation, becoming Sr. Scholastica O'Connor, and the sisters used her money to purchase a 137.2-acre farm three miles north of Bardstown. They moved in June 11, 1822, and have been there ever since. O'Connor was the first sister to die at the new location and the first to be buried there.

"Her lovely grandfather's clock, which stands in Heritage Hall and still keeps perfect time, was the only clock on the property for many years," the order's website says.

While the congregation celebrates two centuries at the farm they named Nazareth, they're also completing extensive renovations on St. Vincent de Paul Church at the heart of their campus. Mass is held in a large gathering room in another building, as the chapel is filled with scaffolding and construction materials and equipment. 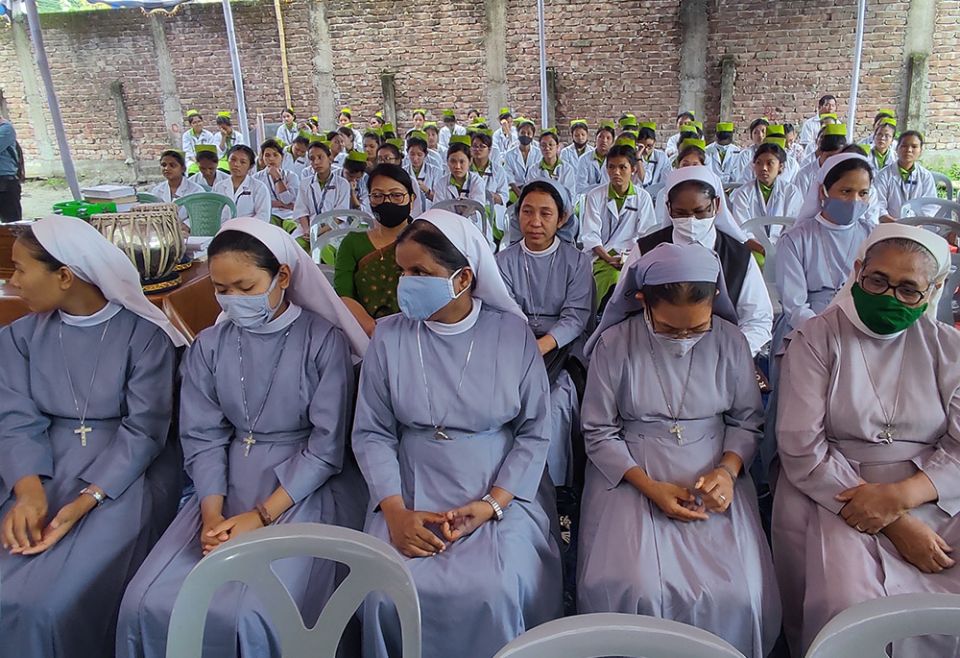 The nursing college started with 40 students in 2019 in a tin shed. Now each year, 130 new students enroll in the college.

Sr. Liah Drong, a Salesian nun and principal of the college, told GSR that they plan to extend their service by making an eight-story building. "Besides nursing education, we provide Christian values and God's message to our students. It is our main objective," Drong said.

Most of their students are non-Christian. Somola Akter, 24, a nurse who is Muslim, said that "besides academic lesson, nuns of our nursing college taught us morality." That included lessons in not "doing any harm that goes against the Creator and human beings."

Less than 1% of the country's population is Christian.

Sumon Corraya, a journalist based in Dhaka, Bangladesh, contributed to this report.

UISG president: 'This is God's time for us'