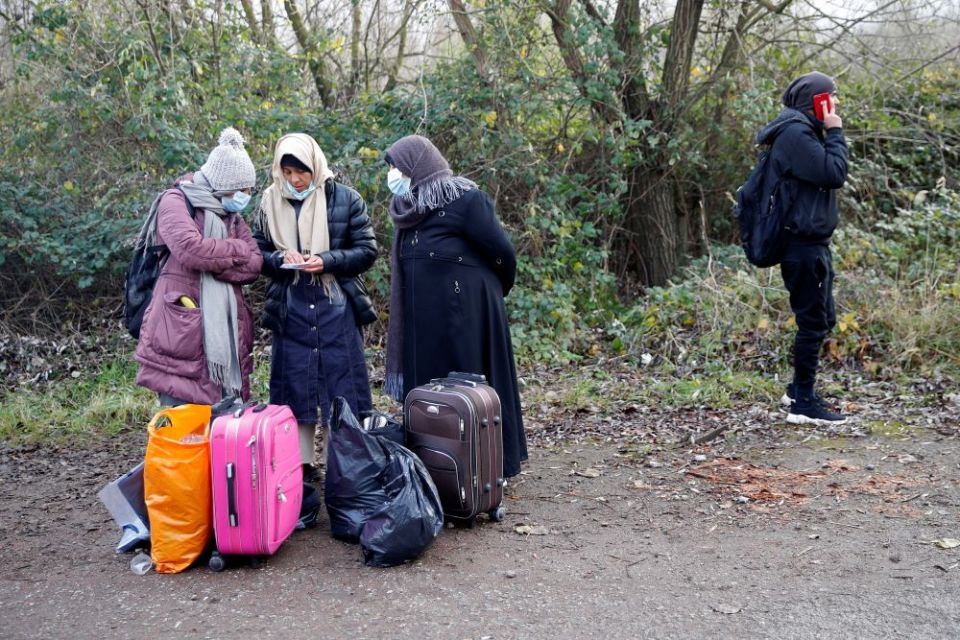 Migrants stand with their belongings at a makeshift migrant camp at Loon Beach in Dunkirk, France, Nov. 25, the day after 27 migrants died when their dinghy deflated as they attempted to cross the English Channel. (CNS/Reuters/Johanna Geron)

The Congregation of the Sisters of St. Joseph of Peace are urging the governments of the United States and the United Kingdom to stop violating the Universal Declaration of Human Rights.

The declaration, adopted by the United Nations General Assembly on Dec. 10, 1948, defines the basic rights accorded to every human being. But the United States' continued use of the Migrant Protection Protocols, known as the "Remain in Mexico" policy, and the British Nationality and Borders Bill, violate both the spirit and the letter of the declaration, the congregation said in a statement issued Dec. 10, the 73rd anniversary of its adoption.

"The above-mentioned policies are cruel and put migrants at risk of physical and mental injury and or death as they are denied the basic rights agreed to be offered by a humane community of nations," the statement says. "The lies of leaders who call their nations 'compassionate' while watching asylum seekers drown off the British coast or be exploited by gangs on the Mexican side of the U.S. border must be called out."

The Migrant Protection Protocols use an obscure public health law to expel asylum seekers at the U.S. southern border while awaiting their day in immigration court. Normally, federal law and international treaties give those seeking asylum the right to remain in the country until their case is decided. The Biden Administration attempted to end the Trump-era policy, but has been forced by the courts to keep it in place until it can use a legal method to repeal it.

The Nationality and Borders Bill, if approved, would give the British government the power to strip someone of their citizenship without any notice. The government has had the authority to take someone's citizenship since the 2005 London bombings, but the power has been gradually expanded since then. If approved, this update would not only allow the Home Office to remove citizenship without notice, but also to do it retroactively, effectively eliminating the possibility of appeal.

These policies would appear to violate Article 9 of the Declaration, which protects people from arbitrary exile; Article 8, which gives the right to effective remedies; Article 10, which guarantees full equality to a fair and impartial hearing; and Article 15, which prohibits arbitrarily depriving someone of their nationality.

"This year we are reminded by the UN that we are 'All Human, All Equal,' " the sisters' statement says. "As Catholics we believe that is so because we are all made in the image and likeness of our Creator. The world community has acknowledged that again and again and many nations are striving to live out that reality. The elected leaders of some nations, sadly, do not act on that truth."

The statement pointed out that the policies also violate the congregation’s 2016 statement on immigrants and refugees, which notes that "At our founding, we were a congregation of immigrants, serving immigrants, knowing their pain and suffering."

The 2016 statement says: "We believe that we are all brothers and sisters and that everyone has the right to be treated with human dignity. … Nations have the right to control immigration and an obligation to provide safety for citizens, but they do not have the right to close borders to all refugees and asylum seekers who are in need."

Devasia, who belongs to the Guwahati Province of the Congregation of the Sisters of the Cross of Chavanod and is a Global Sisters Report columnist, won the award for her work in women’s development in northeastern India.

She received the award from the Delhi-based International Human Rights Council Dec. 10. 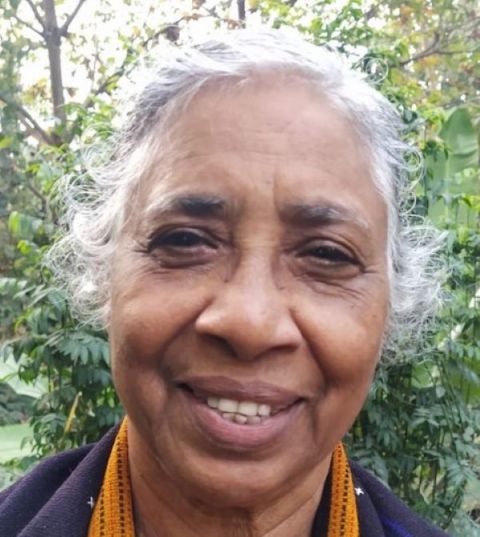 "I am not sure if I deserve this honor," Devasia said in the Matters India report. The work "has been the most rewarding experience of my life. That is an award in itself."

She has worked in northeastern India since 1988 and has been director of the Women's Development Centre in Guwahati since 2008. The center is the social work sector of the province which focuses on women and children. It helps tribal girls complete secondary school, operates a vocational training center, and helps women's self-help groups market their wares. The center has helped more than 500 girls complete their secondary education.

"My award is to be able to see the lives of these underprivileged children change completely," Devasia said in the story. "The underconfident girls who through our educational portals are never the same. They leave our campus with confidence and courage to face the world to make positive contribution to make it a better place to live in." 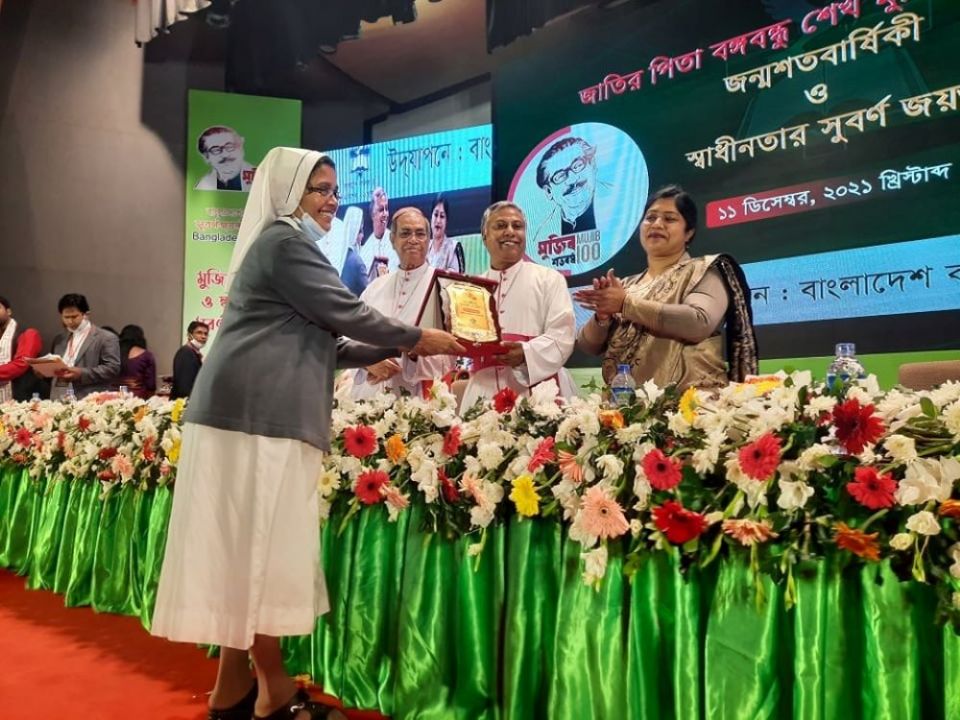 On Dec. 11, the Bangladesh Catholic Church awarded crests of recognition to the late Sr. Catherine Gonsalves of the Sisters of Charity of Bartolomea Capitanio and Vincenza Gerosa, and to St. Mother Teresa and the Missionaries of Charity.

Gonsalves was recognized for her help when members of the provisional government took their oaths in 1971. St. Mother Teresa arranged shelter for those who were wounded in the war and sexually persecuted.

Suman Corraya contributed to this report from Bangladesh.