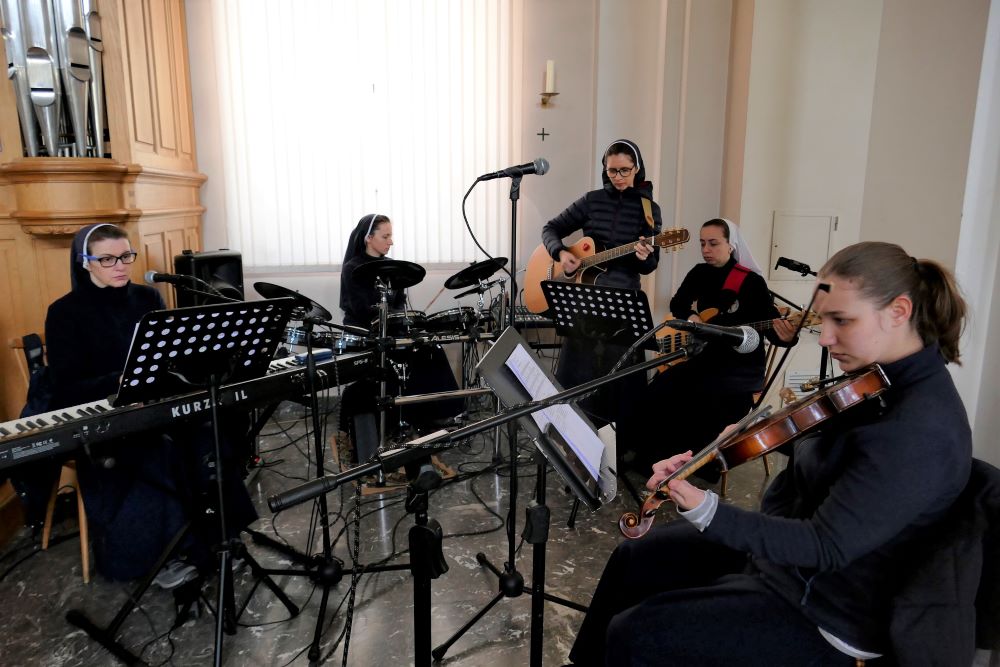 A convent in western Ukraine that until recently sheltered refugees has been turned into a retreat center where nuns use music therapy to console and comfort.

"Hundreds of people now visit our convent and spend time in silence and prayer, just listening to the live music played by our sisters," says Sr. Ligi Payyappilly, superior of the Sisters of St. Joseph of Saint-Marc in Mukachevo, Ukraine.

As part of the convent's therapeutic program, a five-member band of trained musicians, all nuns, sings, prays and consoles people affected by depression and anxiety for at least five hours each day.

"Some cry out their emotions, some remain silent and calm, while others share their emotions with our sisters," Payyappilly told Global Sisters Report. 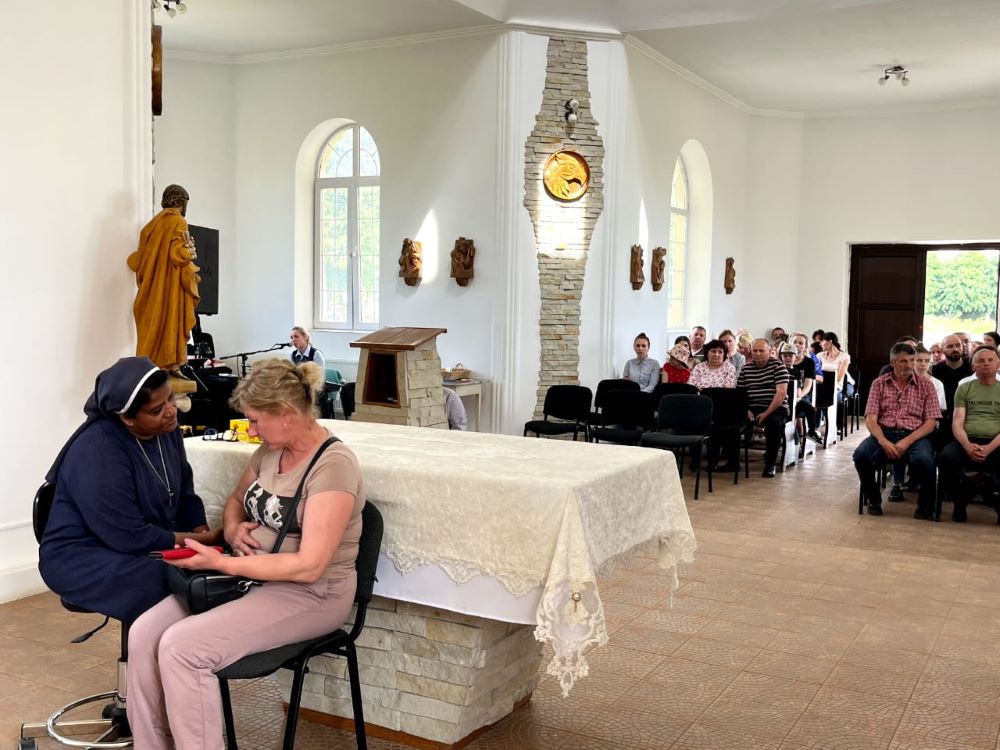 The band sings devotional songs while other sisters provide counseling and spiritual guidance.

"I feel more united with Jesus and his people when I play my violin or sing," Sister Natalka, a postulant who plays the violin, told GSR.

Others on the team are Sister Laura (keyboard and vocals), Sister Christina (guitar), Sister Erika (drums) and Sister Marina (vocals).

Ludmila Kalinich, a woman in her late 40s, said she forgets her worries when she listens to the nuns' music or prays silently in the convent.

"My 20-year-old son and husband are serving the Ukraine army, and my only solace is in the Lord," the woman, who visits the convent every week, told GSR.

Kalinich is among the estimated 300 people who visit the convent regularly.

The convent has a "cry room" for visitors to sit and cry or otherwise let out their suppressed emotions. Also popular is the unfinished retreat center with an adoration room and a hall.

"I tried to raise funds to complete the building, but did not get enough," said Payyappilly, who returned June 7 from Vienna, where she had gone to meet some benefactors. 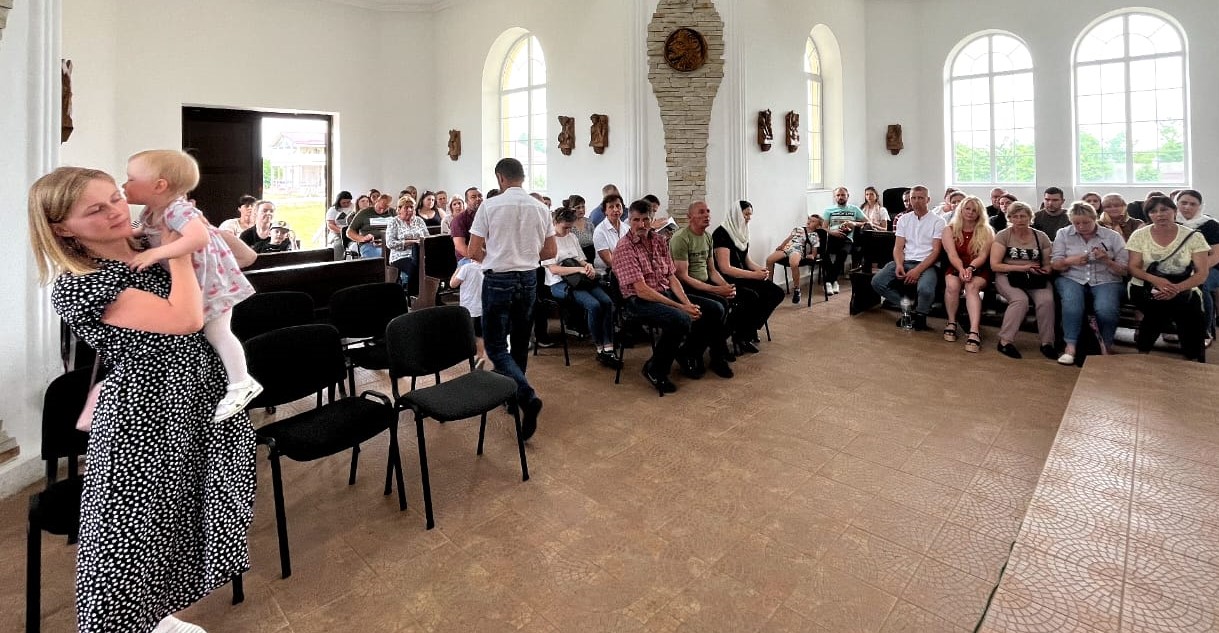 A mother and child walk into the prayer hall where people are seated for prayer and worship at St. Joseph of Saint-Marc Convent in Mukachevo, Ukraine. (Courtesy of Ligi Payyappilly)

Payyappilly said the convent sheltered about 100 people daily during early weeks of the war. Only 20 refugees now stay there; others have gone back to their homes.

"Not that their crisis is over, but they have developed resilience to live with the crisis in their war-torn country," said Payyappilly, a native Indian who has devised several programs to help the refugees.

Kalinich stayed as a refugee in the convent in the beginning of the war but has since returned home.

"How can we stay comfortably here when our men are either dying or suffering at the war front?" she said.

Milwaukee sisters' beer garden is back

As Sr. Kathy Chuston put it, "A beer garden is probably the most Milwaukee thing ever. 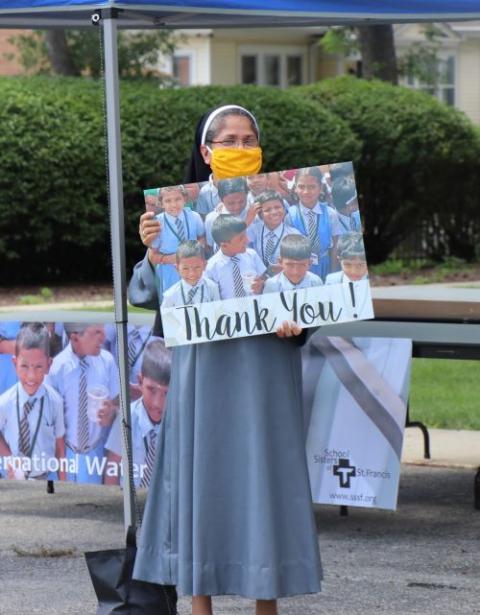 The School Sisters of St. Francis started their Sister Water Beer Garden in 2019 with a series of three events in the convent gardens to raise money for their efforts to bring safe, clean water to the people they serve around the world. The event is named the Sister Water Beer Garden after St. Francis' "Canticle of the Creatures," which refers to "Sister Water" and "Brother Wind."The events were a big success in 2019 but had to be dramatically modified to make them safe after the start of the coronavirus pandemic in March 2020. Instead of a beer garden, the sisters held a drive-thru where they sold a "beer garden in a box," which contained a big jug of beer, commemorative pint glasses, soft pretzels and gourmet mustard.

This year, the beer garden is back in the gardens and features live music, food, wine, games and — of course — beer. Local brewery Lakefront Brewing is crafting special beers for the event, "Ale Mary" and "Our Lager." Food includes bratwurst (this is Milwaukee, after all), shredded barbecue chicken sliders and hot pretzels.

Sr. Judy Zielinski has been busy, but her work is far from done.

The Sister of St. Francis of Sylvania, Ohio, is the director of faith and values programming at NewGroup Media in South Bend, Indiana, and wrote and produced the 2020 documentary "Walking the Good Red Road: Nicholas Black Elk's Journey to Sainthood."

When that project concluded, she turned to another inspiring project: the life of Servant of God Sr. Thea Bowman, a trailblazing African American sister who was the first Black sister in her white congregation, the first Black woman to address the U.S. Conference of Catholic Bishops, and an inspiration to thousands of people with her words and songs.

Zielinski reported in an email that her team is "deep into editing" and is "on target to release the film for fall broadcasts on ABC stations nationally."

In the meantime, her team has released a nearly seven-minute preview of "Going Home Like a Shooting Star: Thea Bowman's Journey to Sainthood" on YouTube.

"In light of the deep darkness and division we face daily in our country and world, Thea's story seems as timely and relevant today as it did 30 years ago," Zielinski wrote in the email. "Watching the preview, you will have no doubt that is true."

The remains of 24 Dominican Nuns of the Perpetual Rosary have been moved to their own special section in a Catholic cemetery, Lancaster Online reports.

The nuns had been buried in a small cemetery at their Monastery of the Immaculate Heart of Mary north of Lancaster, Pennsylvania. But that monastery, which opened in 1955, closed in September because of dwindling numbers, and the four remaining nuns who lived there have moved to the Corpus Christi Monastery in the Bronx borough of New York City.

The 24 were reinterred at St. Joseph's New Roman Catholic Cemetery southwest of Lancaster; they joined a nun who died in April and was buried there first. A special blessing ceremony was held June 3, according to Lancaster Online.

The College Theology Society, one of the major academic theological societies in the United States, announced June 4 that its 2022 presidential award will go to the social justice Catholic lobby Network to honor its 50 years of advocating for Catholic social justice through political ministry.

Joan Neal, deputy executive director and chief equity officer at Network, noted that college theologians have a special responsibility in the fight for social justice, according to Network's press release:

Because many of you teach young adults, you have an important opportunity now to shape a new generation, to form their minds and their understanding in such a way that the sin of racism might someday cease to exist.