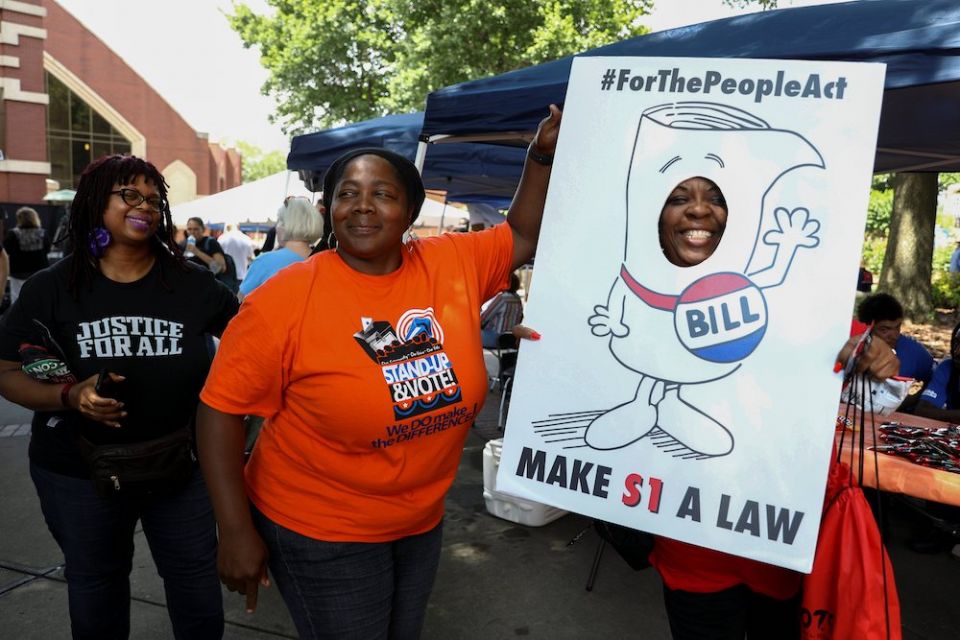 People in Atlanta advocate for the For the People Act on a June 21 stop on the Black Voters Matter organization's Freedom Ride for Voting Rights. Organizers said they planned the tour to recall the Freedom Rides, a series of protests against segregation by Blacks and whites who rode buses together through the South in 1961. (CNS/Reuters/Dustin Chambers)

When U.S. Senate Republicans blocked a procedural vote June 22 on a sweeping overhaul of the nation's election laws, they hurt democracy itself, several faith leaders said.

The vote failed 50-50, with every Democrat voting yes and every Republican voting no.

Howard, the coordinating director of advocacy, outreach and campaigns for Faithful Democracy and a government relations specialist at Network, said blocking debate on the bill was "shameful and damaging to our democracy."

"What Republicans in the Senate fail to appreciate is that they also would benefit from the passage of the For the People Act," she said in a written statement. "The alternative — continued inaction — leads to an unjust and unfair future for our country, characterized by increasingly anti-democratic tactics to suppress the vote. The Republican Party needs these reforms just as much as the Democratic Party to protect the integrity of our elections."

"Each and every Senator who refused to debate democracy reforms is failing in their duty. These reforms are overwhelmingly popular with the public and deserve to be deliberated. Refusing to consider the threats to our democracy is a position that accepts voter suppression and the growing control of money in politics."

"Once again, the filibuster blocks progress on racial justice and equity in our country. S.1, the For the People Act, is made up of bold, bipartisan democracy reforms to protect the freedom to vote and strengthen our electoral system," Novak said in a written statement. "Much like their obstruction of a bipartisan January 6th Commission, they avoid deliberations that might get at the legacy of white supremacy and its continued threat to our democratic institutions.

A new statue for Mother Cabrini

On June 11, Brooklyn Bishop Nicholas DiMarzio unveiled and blessed the Diocese of Brooklyn's statue dedicated to St. Frances Xavier Cabrini in a shrine outside Sacred Hearts & St. Stephen Roman Catholic Church in the Carroll Gardens section of Brooklyn. Members of the Missionary Sisters of the Sacred Heart of Jesus, which Cabrini founded, attended the ceremony after a Mass. 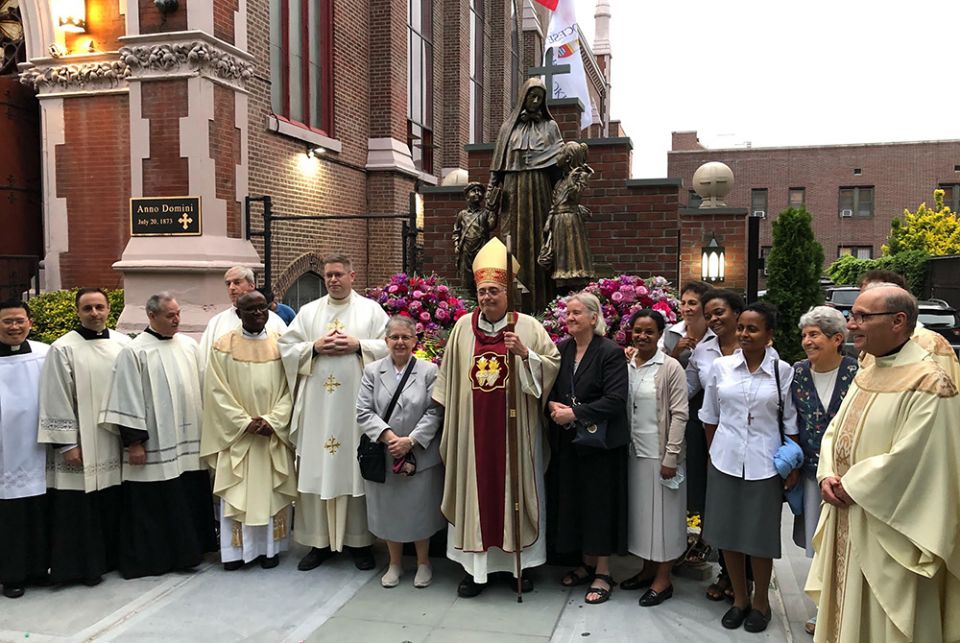 Bishop Nicholas DiMarzio stands with the members of the Missionary Sisters of the Sacred Heart of Jesus and others in attendance at the dedication of the new Mother Cabrini statue and shrine in the Carroll Gardens section of Brooklyn, New York. (Courtesy of the Diocese of Brooklyn)

"It's a real replica of her presence here so that people can remember what she did in her life. She reached out to the people on the margins of society, and that's our job today," DiMarzio said, according to a diocesan press release. "Her courage was great because her faith was great, and even when Mother Cabrini was met with rejection, she never returned anything but love."

Cabrini received the most votes in the 2019 She Built NYC public art campaign but was not selected to have a statue built in her honor by the City of New York because New York state officials had announced a statue dedicated to her in Battery Park.

That statue, dedicated on Columbus Day 2020, depicts her with immigrant children looking toward the Statue of Liberty and Ellis Island.

The Sisters of Mercy's new school

In an era when Catholic schools across the nation are closing or facing falling enrollment, the Sisters of Mercy of the Americas are opening a new one.

Mercy Education System of the Americas, a sponsored ministry of the Mercy Sisters, announced June 17 they would open a new Catholic career and technical junior and senior high school in Stuart, Florida.

"We are opening the door to students in need by providing an excellent, affordable education that prepares them for contemporary job options," Sr. Patricia McDermott, president of the Sisters of Mercy, said in a written statement.

The school's location in the Diocese of Palm Beach allows it to serve a growing population of families of Central and South American descent who often lack access to a meaningful pathway to a living wage because of systemic oppression, the announcement said.

"People in underserved neighborhoods were impacted the most by the pandemic," Sr. Lisa Griffith, executive director of Mercy Education, said in the statement. "A diverse, educated health workforce can make a major difference in the health and welfare of all people."

A peer-reviewed academic journal on religious life, Review for Religious, hopes to provide a single place for the study of religious life and its role within the church and society.

The journal, sponsored by the Conference of Major Superiors of Men and publishing partner Catholic University of America Press, launched June 21 with an article by Cardinal Michael Czerny, undersecretary for the Dicastery for Promoting Integral Human Development's Migrants and Refugees Section, on "Religious Life from Vatican II to Fratelli Tutti."

Czerny's piece can be read for free online; subscriptions to the three-issues-per-year journal are $45.

The journal's nine-member editorial board includes Cimperman; Mother M. Maximilia Um, provincial superior of the Sisters of St. Francis of the Martyr St. George; and Sr. Mary Bendyna, a member of the Dominican Sisters of St. Cecilia and executive director of the Council of Major Superiors of Women Religious.

"It is extremely rare to launch a journal these days," said David Rohrer Budiash, managing editor of the journal and website, "but the leadership of the Conference of Major Superiors of Men recognized the need for a forum that explores and supports Catholic religious life — male and female — in the context of our current complex and global society."

An earlier iteration of Review for Religious was published under Jesuit sponsorship from 1942 to 2012. The new Review draws upon this 70-year history while engaging with the contemporary world and into the future.

"Our hope is that the Review serves as a gathering place for thought, discussion, and unity. We want to create a place where everyone in or interested in Catholic religious life can find something engaging and intriguing," Budiash said.

Eldest Mercy sister in world dies at age 111, was an educator for 50 years

Sisters adapt food ministries to cope with pandemic, surge of those in need