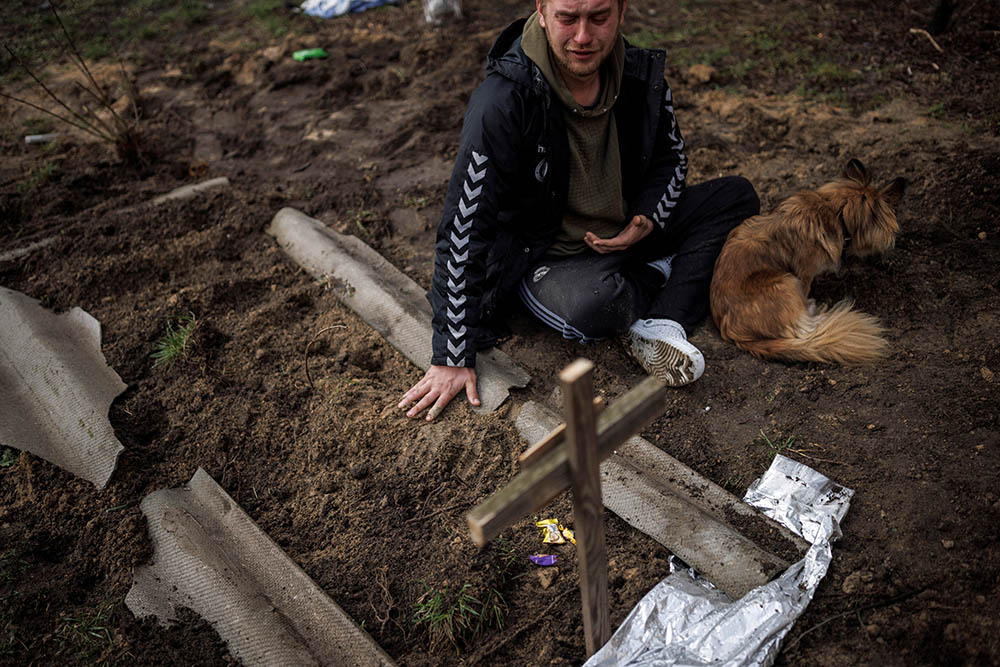 Serhii Lahovskyi, 26, mourns next to the grave of his friend Ihor Lytvynenko after Lytvynenko was found beside a building's basement in Bucha, Uraine, April 6. Residents say Russian soldiers killed Lytvynenko. (CNS/Reuters/Alkis Konstantinidis)

Despite recent Russian bombardments in western Ukraine, sisters at one monastery in the city of Lviv, near the border with Poland, are doing well.

However, they are saddened but not surprised by the recent news of Russian forces executing civilians near the capital of Kyiv, including in the city of Bucha, said Sr. Anna Andrusiv of the Sisters of the Order of St. Basil the Great.

The killings have prompted international condemnation and calls for an investigation into possible war crimes.

"We are fine," Andrusiv told Global Sisters Report in an April 6 WhatsApp exchange. "But we are also terrified, too. Deep inside all of us knew [something like this] would happen: murders, raping, this kind of horror."

Though there is a history of Russian forces targeting civilians in such locales as the province of Chechnya, Andrusiv noted that Ukrainians have special reason to be concerned about reports of the killing of civilians. 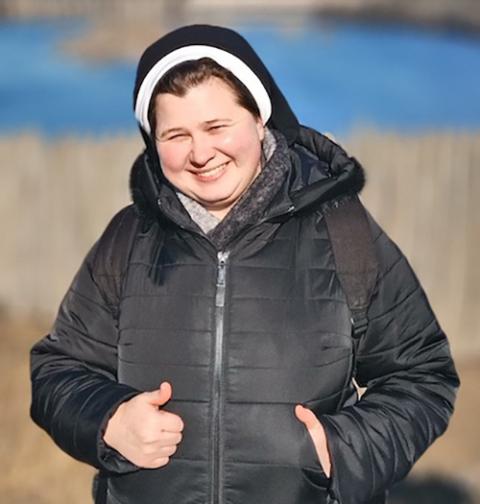 These include a history of war between Ukrainian and Bolshevik forces after the 1917 Russian Revolution in which Ukrainians lost their attempt at national independence, as well as a famine in the 1930s that resulted from Soviet policies targeting Ukrainian farmers. The farmers opposed Soviet farm collectivization, as a recent report in Smithsonian Magazine noted.

Soviet repression against the church throughout the 20th century was common, particularly against the Ukrainian Greek Catholic Church, an Eastern rite congregation that remains loyal to Rome.

Andrusiv's great-grandfather, a priest, was exiled to Siberia and later executed there, and other family members also were exiled to Siberia, she said. Many of the Eastern rite churches follow the common Orthodox practice that a man who is married can become a priest after being married, but a priest who is already ordained cannot then become married. And bishops must always be celibate.

Given that history, Andrusiv said, the news of Russian forces killing civilians is "not something new for us. That's why we've been afraid."

Andrusiv said all 27 sisters living at the Lviv monastery, the congregation's main convent in Ukraine, are safe. She added that there are now no visitors staying at the convent following the initial weeks of war, when Lviv was a hub for those fleeing violence and bound for Poland and other European countries.

However, other congregational monasteries in Ukraine continue to host displaced families, she said.

Bangladeshi nuns pray for the end of the Ukraine war

International solidarity with Ukraine continues with formal prayer services, such as one in Dinajpur, northern Bangladesh.

Thirteen members of St. Clare Adoration Monastery prayed for the end of the war in Ukraine at an April 1 service at the sisters' monastery in Gobindapur, Dinajpur.

"We prayed for the leaders of Russia and Ukraine so that they change their minds and stop the bloody war," Sr. Mary Petra, mother superior of the monastery, told Global Sisters Report. "We hope soon, they will stop the war, and the people of Ukraine can live there with peace." 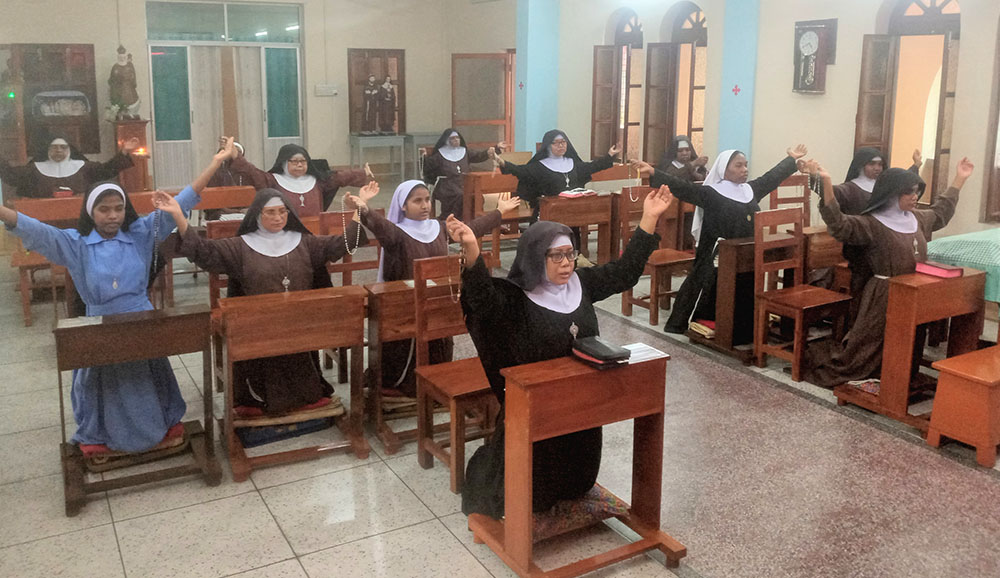 She said the sisters also prayed and fasted for peace in Ukraine on Ash Wednesday, as Pope Francis requested in February.

"We are continuing our endless prayer on it," she said. "We see that war never brings peace on Earth. It brings unrest. Therefore, we urge the leaders of Ukraine and Russia to sit in dialogue to end the war."

It noted that the Maryknoll Sisters, in partnership with the Interfaith Center on Corporate Responsibility, continue their work on shareholder dialogues with chemical, energy and mining companies and recently filed shareholder resolutions focused on climate change, human rights, and environmental damage caused by pollution.

The newsletter took note of a recent Catholic News Service story focused on the Sisters of the Presentation of the Blessed Virgin Mary of Aberdeen, South Dakota. The story and newsletter noted that the congregation is urging Amazon.com Inc. "to become more transparent in its lobbying efforts in regard to climate change and adherence to the 2015 Paris climate agreement."

The newsletter reported that Washington Retreat House in Washington, D.C., which is owned and operated by the Franciscan Sisters of the Atonement, has installed solar panels on its roof. The house has also planted 17 trees on its property, the report said, and set up two rain barrels. It has switched to LED lighting and Energy Star appliances and is "moving away from single-use plastic utensils and service wear," the report said. The retreat house, the newsletter said, hopes to be known as a "hub of eco-consciousness."

The Sisters of Providence of St. Mary-of-the-Woods, Indiana, concluded its celebration of Catholic Sisters Week on March 14 by commemorating the International Day of Action for Rivers, the newsletter reported. Among the actions: prayer, song and a blessing of the Wabash River. A number of sisters traveled to Fairbanks Park in Terre Haute to bless the river, the report said, and to recognize the First Nations peoples who lived on land that is now within the state of Indiana.

Enjoy the sledding and snow!

The Handmaids of the Precious Blood, a congregation of cloistered contemplative nuns based in New Market, Tennessee, enjoyed a day of sledding following a recent day of snow.

Thanks to a robust social media presence, we can enjoy the day vicariously:

[Sumon Corraya in Bangladesh contributed to this Monday Starter.]