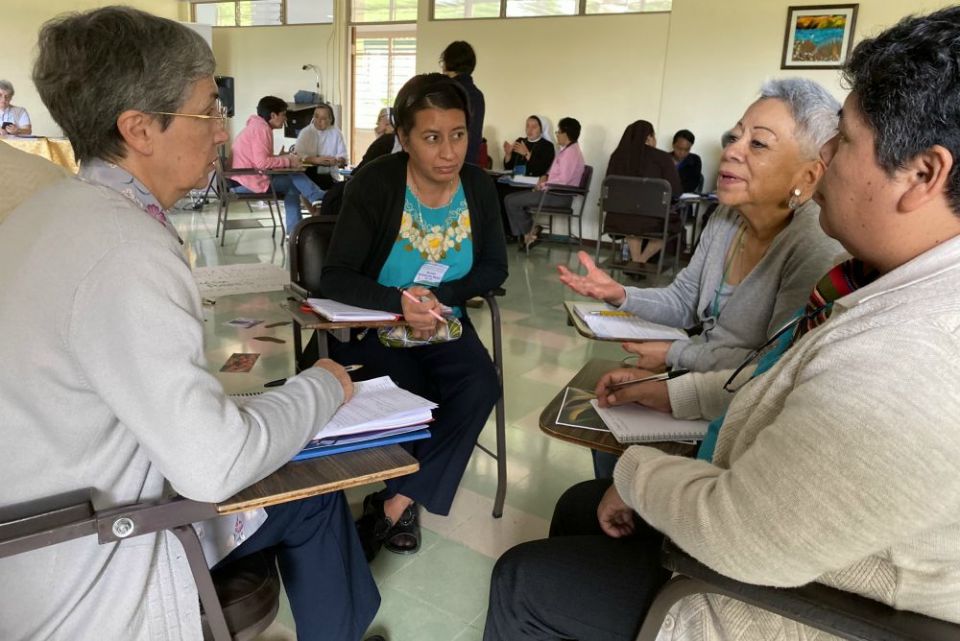 Participants discuss their countries' issues at the Nov. 30-Dec. 2, 2019, gathering of the Confederation of Latin American and Caribbean Religious. (GSR photo/Soli Salgado)

Editor's note: Global Sisters Report's blog, Monday Starter, is a weekly feature from GSR staff writers that rounds up news from or about women religious that you may otherwise have missed.

The Confederation of Latin American and Caribbean Religious will convene online Aug. 13-15, uniting the leaders of the countries' religious conferences in dialogue regarding a synodal church.

"We hear the echo of the poor, of the Earth and we continue living a pandemic that disrupts daily life and mercilessly reveals the social gaps of our people," the program said, describing the context in which the leaders will be gathering. "The course of these years has been marked by the certainty of that 'now is the time,' and today more than ever, we are called to unravel the prophetic and missionary vocation of our identity, aware that we are invited to an intercongregational, intercultural and itinerant journey" — the theme of the gathering.

The program highlights several objectives for the virtual congress: build and discern the implications of a truly synodal religious life that embraces the "inter-"; advance as a "universal family" toward an ecological conversion that cares for the "Common Home"; recommit to the invitation to create protective environments that prioritize care, dialogue and compassionate relationships; and more.

New theological institute for formation of religious life in the Americas

A project of the Claretian Missionaries, the institute "aims to respond to the need for an interdisciplinary theological reflection on consecrated life from a missionary perspective," according to the website. "It is at the service of the pastoral, integral and academic formation of consecrated persons and of other missionary disciples of the church on pilgrimage in America."

The academic formation will be approached with a "synodal perspective," the website says, encouraging relationships by providing tools and resources to "renew the missionary life of the missionary disciples" from the various religious institutions throughout the Americas, establishing agreements and partnerships with similar international networks and conferences, offering virtual (and, eventually, in-person) formation and training seminars, and much more.

Courses are offered in English, Spanish and Portuguese. 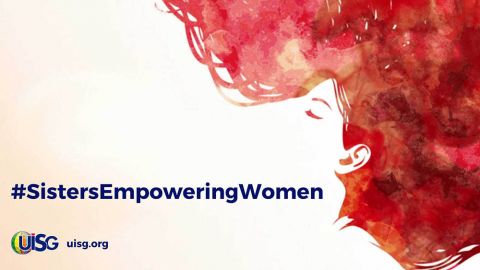 The logo for the International Union of Superiors General's #SistersEmpoweringWomen initiative, which runs through July 15 (Courtesy of UISG)

The third of seven online events titled "Sisters Empowering Women: A Place at the Table in the Spirit of Fratelli Tutti," hosted by the International Union of Superiors General, will take place at 2 p.m. Central European Time on June 3.

The series is organized into "seven themes in a seven-course meal" as an "opportunity to meet women religious who live Fratelli Tutti in the world and open paths of empowerment and hope through their mission." The June 3 event will focus on "educating for human flourishing," while other themes in the series include synodality, peace, economy, health, care and advocacy.

Speakers include historians, psychologists and leaders in education, and there will be testimonies by sister educators on the "global compact on education." Chiara Porro, the Australian ambassador to the Holy See, will moderate the event.

Sr. Agustina Rivas López, who was publicly executed by guerrillas in Peru in 1990, is on her way to becoming a saint.

The member of the Congregation of Our Lady of Charity of the Good Shepherd was the first religious woman murdered by the Shining Path, a militant wing of Peru's Communist Party, according to her congregation's website. (Six local villagers were executed alongside Lopez.)

Recognizing her martyrdom, Pope Francis advanced her cause for sainthood after a May 22 meeting with Cardinal Marcello Semeraro, prefect for the Congregation for the Causes of Saints.

"Pope Francis' promulgation of the beatification of our beloved Sr. Aguchita" — as she was known to the Indigenous people to whom she ministered in La Florida — "is without a doubt an extraordinary grace for all of us and for all the people of God," the congregation said in a May 22 statement.

Twenty-seven religious communities pooled their money in 1983 to form a new investment: The Leviticus 25:23 Alternative Fund, aimed at investing in community-building projects such as affordable housing. Together, they invested $360,000 and got to work.

By 1994, they were one of the nation's first Community Development Financial Institutions, and they have since financed early childhood education, housing, community health, charter schools and food access. Based in Tarrytown, New York, just north of New York City, the fund operates in five states.

Leviticus works in some ways like a bank: Individuals or organizations invest in the fund the way one purchases a certificate of deposit, essentially loaning Leviticus money for a set amount of time at a fixed interest rate. Leviticus then loans that pooled money to projects such as the New Providence Women's Shelter in New York City.

That has worked well for 38 years, and Leviticus has invested more than $142 million in efforts that foster social, economic, environmental, racial and ethnic justice. Now, seven of the original investors have turned their investments into donations, a pool of capital Leviticus calls its Legacy Fund.

The seven organizations — the Dominican Sisters of Sparkill, New York; Franciscan Sisters of Peace; Good Shepherd Sisters; Religious of the Sacred Heart of Mary; Sisters of St. Dominic of Blauvelt, New York; Ursuline Sisters of Roman Union; and the Crusade for Family Prayer — donated a combined $230,000 to the permanently restricted fund, which will not be spent down but can be used as matching funds to receive grants or to borrow against if needed.

"I very clearly remember that first annual meeting," Mercy Sr. Patricia Wolf, founding president of the board of the Leviticus Fund, said in a statement announcing the Legacy Fund. The founding members "took a risk on Leviticus, and now ... nearly 40 years later, Leviticus is still here. Joining the Legacy Fund extends their membership in perpetuity."

A twist on the celebrated "30 under 30" lists that make the rounds in media, the new podcast series "70 Over 70" by veteran podcaster Max Linsky intends to highlight the accomplishments, reflections and wisdom of celebrated individuals over the age of 70.

Linsky's first guest was 81-year-old St. Joseph Sr. Helen Prejean, whose activism against the death penalty and ministry to those on death row led to a bestselling memoir, Dead Man Walking, later adapted to a critically acclaimed 1995 film.

In the episode, "What If Fire Is Just Love?", Prejean recalled her conversations with those she accompanied on death row, why she prefers "hope" to "optimism," her thoughts on an afterlife, and the effects this ministry has had on her emotions and perspectives.

"When you know the wrongness of something, that this is happening, of course it impacts you," she said in the interview. "There's a sadness, there's a weight, there's a heaviness, and you kind of just have to take it in" and consider those feeling the pain more acutely: the accused, their families, "even the guards" who lead the individual to execution.

"Grieving is just part of it; you've got to take it in so you're not just living on your surface-soul," Prejean said. "You can't stay in it. You have to keep moving, and gradually, it does get better."

The weekly series intends to feature 70 guests in all. Upcoming interviews include Dionne Warwick, Madeleine Albright, Dan Rather and Norman Lear, as well as short profiles of nonfamous people at the beginning of each episode.

Soli Salgado is a staff writer for Global Sisters Report. Her email address is ssalgado@ncronline.org. Follow her on Twitter: @soli_salgado. Dan Stockman contributed to this Monday Starter.

US cardinal gives nuns in Havana a host-making machine