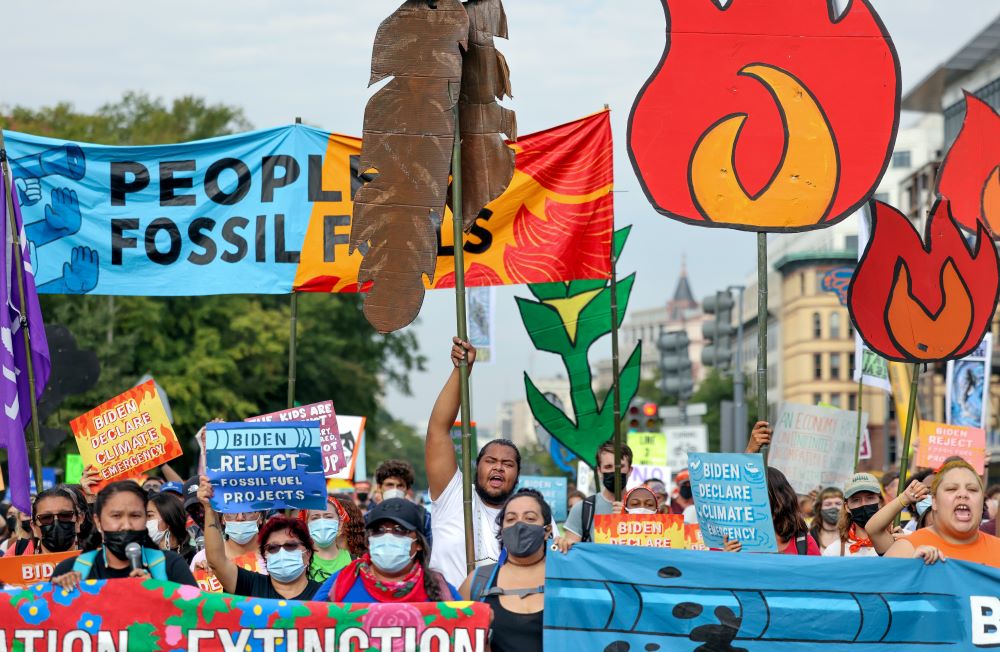 As part of the United Nations' annual two-week Commission on the Status of Women, the Loretto Community celebrated a congregational milestone: the 30th anniversary of its environmental ministry, the Loretto Earth Network.

What began as a small-scale effort by six members of the congregation in 1992 to heighten awareness of environmental issues has transformed into a cornerstone for the congregation, with retreats, educational efforts and implementation of Earth-friendly practices, including a planned conservation easement of 600 acres of land at the congregation's motherhouse in Nerinx, Kentucky.

"Loretto has always had its pulse on what is happening in the world," Beth Blissman, representative of the Loretto Community at the United Nations, said during a March 22 online event, noting that this year also marks the 30th anniversary of Loretto's work at the United Nations.

Blissman said the term "environmental ministry" does not encompass all the Loretto Earth Network is attempting to do.

"We in the Loretto Earth Network would actually be more likely to say that we are working in community to bring our larger Loretto Community to a shift in consciousness, seeing our intimate connections with all of creation in our 13.8-billion-year history of existence," she said.

Blissman added that while maintaining a focus on both spiritual and practical concerns, the network is also helping educate the wider Loretto community on the goals of the churchwide Laudato Si' Action Platform.

In a series of taped reflections, some of the six Loretto sisters who created the network spoke of their experiences. One of them, Sr. Kathleen Tighe, said the sisters' environmental awareness grew into a more expansive view of connection to the whole cosmos.

"It was just a whole process," she said of how, bit by bit, the congregation embraced a vision putting protection of the Earth at the center of its mission and ministry.

"We can't help but be connected spiritually to our whole Earth community," Tighe said. 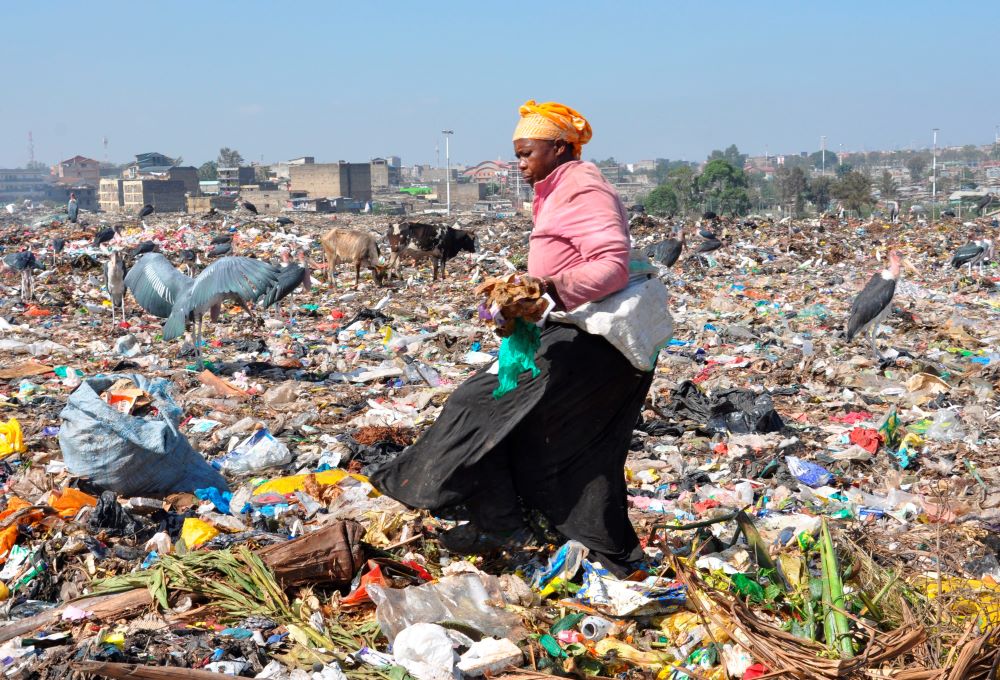 Jessie Rathburn, Loretto's Earth education and advocacy coordinator, praised sister members of the network for "tilting" the congregation toward an Earth-centered ministry, saying that the ministry has encompassed both the spiritual and the tangible, such as the planned conservation easement.

The celebration of the Loretto Earth Network came as the 66th annual meeting of the Commission on the Status of Women, held March 14-25, focused on the theme of empowering women and girls in the context of climate change and environmental and disaster risk reduction policies.

"The challenges we face today — the COVID-19 pandemic, the climate crisis, the growth and spread of conflicts — are largely the result of our male-dominated world and male-dominated culture," the U.N. chief said.

"That is why gender equality and gender parity are not only a matter of women's rights, but fundamental prerequisites for a safer, more peaceful, more sustainable world for all." 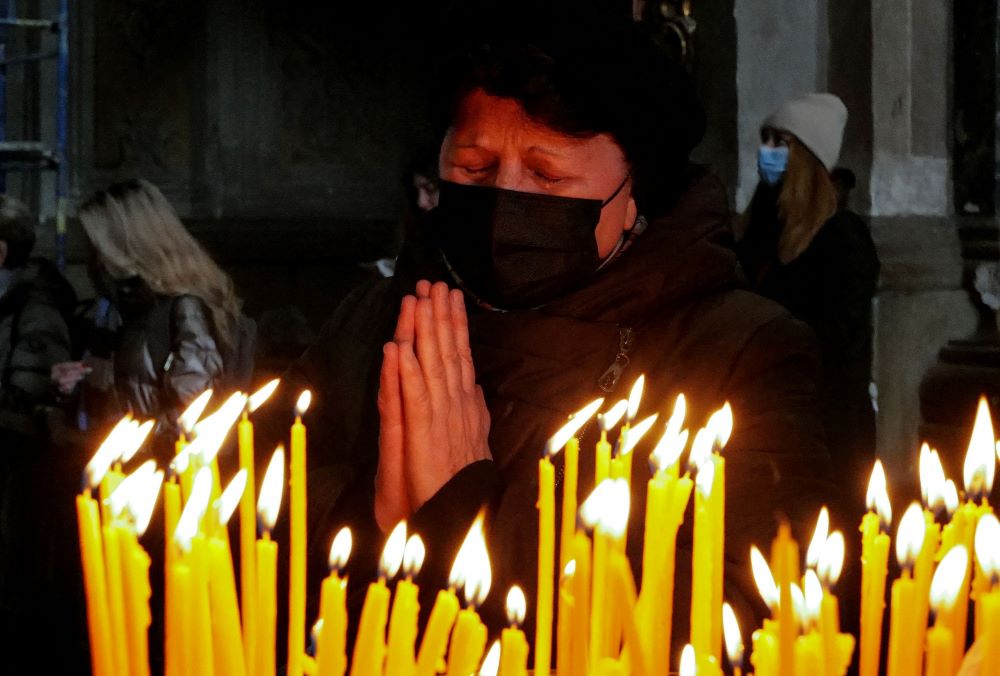 A woman prays at the Catholic Church of the Holy Apostles Peter and Paul on March 20 in Lviv, Ukraine. (CNS/Reuters/Zohra Bensemra)

Five communities of women religious have come together to take a stand against the Russian invasion of Ukraine.

"[We] walk in solidarity with the people of Ukraine who are suffering from the invasion by Russian forces. Vladimir Putin is attacking democracy in Ukraine with military might and misinformation. We stand with all who support the people of Ukraine and the preservation of its democracy," the statement says. "As we see the young democracy of Ukraine under attack, we are mindful of threats to democracy within our own country. We must stay informed, educate ourselves as voters, and support such efforts as the Freedom to Vote Act, an Act designed to ensure fair representation and increase transparency in political campaign spending."

The five congregations also created a list of ways to help.

"As women of faith, we invite you to stand with Ukraine and with those religious communities whose Sisters serve in Ukraine, Poland, and other border nations by offering prayers and, when possible, providing material support," the statement says. "Ukrainian President Volodymyr Zelensky said in his address to Congress on March 16, 'Right now, the destiny of our country is being decided.' Right now, let us all work together to preserve peace and democracy in Ukraine and in the United States of America."

At issue was whether Ramirez's pastor could lay hands on him and pray aloud during the execution. State officials had said he could not.

"I pray that John Henry Ramirez will not die at the hands of Texas executioners," Prejean wrote in the New York Times essay. "But if he is killed, I pray that his faith companion, Pastor Moore, will be there with him, laying his hands on him, shoring up his dignity, commending him to God." 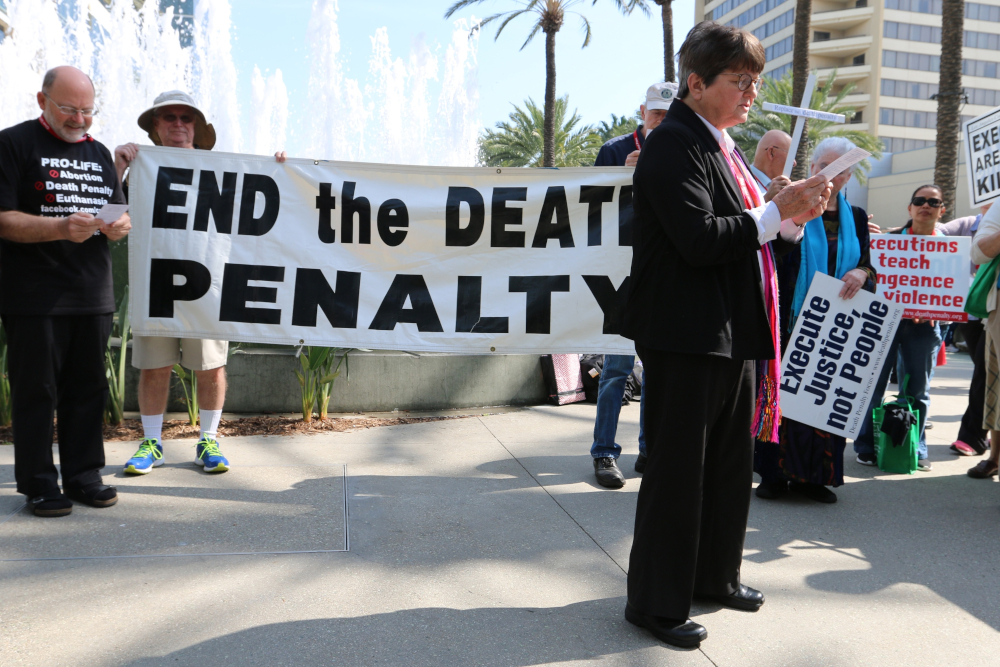 Sr. Helen Prejean, a Sister of St. Joseph of Medaille, speaks at a 2016 protest in Anaheim, California. (CNS/The Tidings/J.D. Long-Garcia)

Prejean, author of Dead Man Walking and one of the nation's most prominent advocates for ending the death penalty, joined five other spiritual advisers to death row inmates and four former corrections officials in a friend of the court brief on the case. Also among the spiritual advisers filing the brief was Providence Sr. Barbara Battista.

On March 24, in an 8-1 ruling, the Supreme Court said an outright ban on touching the prisoner and praying aloud is unconstitutional, the New York Times reported. Justice Clarence Thomas dissented.

Prejean tweeted March 24 that she was proud to have been part of the case.

"There was no legitimate reason for Texas to restrict these dignified, prayerful actions in the execution chamber," she said in the thread. "I'm glad the SCOTUS agreed."

Ramirez had been scheduled to die in September, but the Supreme Court stayed the execution just hours beforehand until his case could be heard. It is not yet known when Ramirez's execution will be scheduled.

The Religious Formation Conference has launched a new database of resources for those in Catholic formation and consecrated life.

The portal is intended for those in formation ministry, congregational leadership, associate programs, and those who support the formative journeys of those entering religious communities, officials say. It serves as a clearinghouse of information for both initial and ongoing formation.

The database includes digitized, searchable content and categories that break down resources by topic.

*An earlier version of the Monday Starter gave an incorrect date.