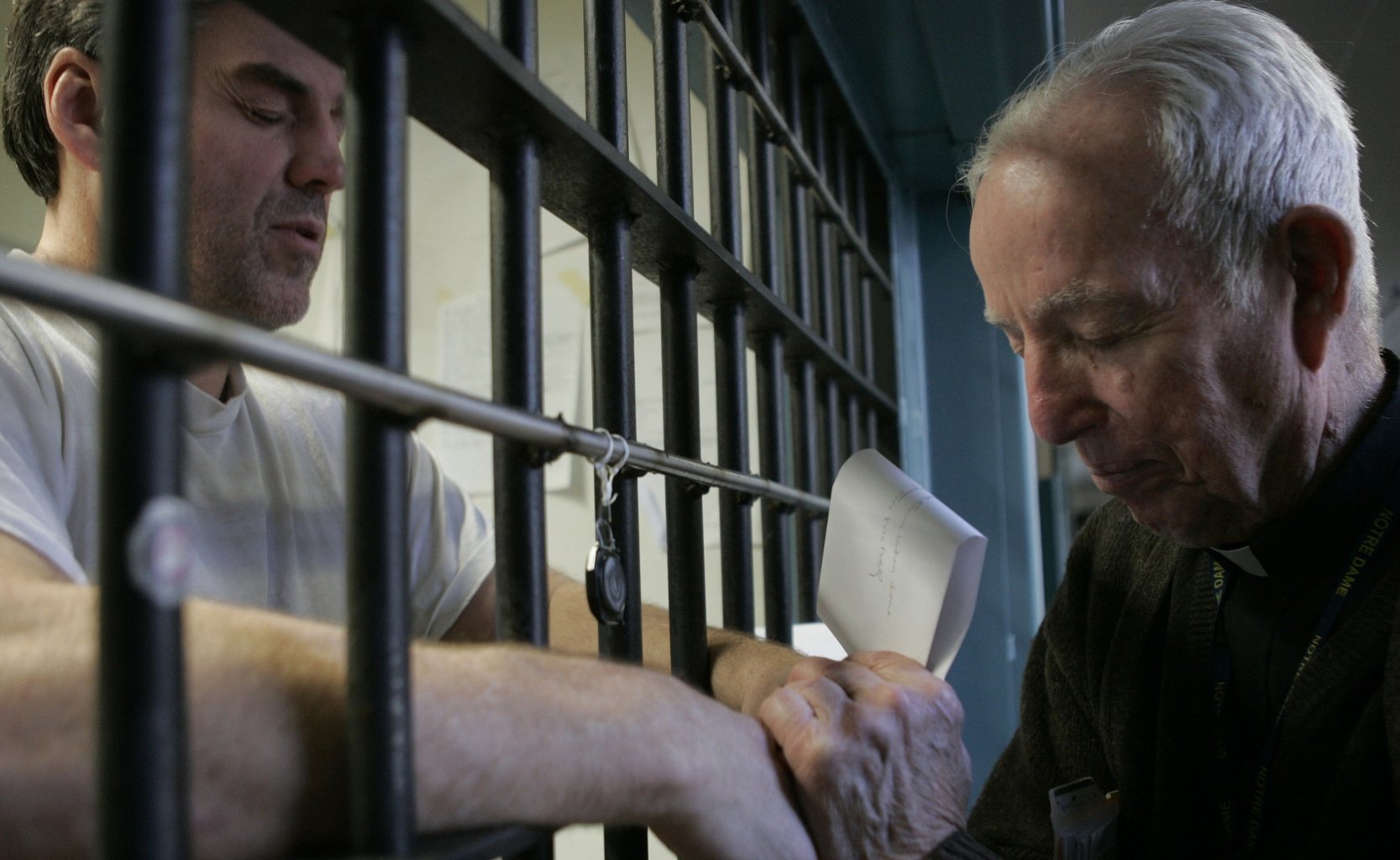 A case before the Supreme Court Nov. 1 argues that death-row chaplains should have the final word.

Specifically, they should be able to pray aloud with inmates and place their hands on them in prayer during executions, which is what John Ramirez, a Texas death-row inmate, is seeking.

Ramirez, 37, was sentenced to death for the murder of a convenience store clerk in 2004. Just hours before his scheduled execution in early September of this year, the Supreme Court stopped it and agreed to hear his case.

He had asked that his Southern Baptist pastor be able to lay hands on him and pray aloud with him during his execution. When the Texas prison system rejected this, Ramirez challenged it in court, saying the state was violating his religious beliefs. The lower courts sided with the state, saying the prison system has a compelling interest to keep executions safe and orderly.

But the Supreme Court is willing to take a closer look.

It sounds somewhat familiar because the nation's high court has looked at spiritual advisers accompanying inmates during executions four times in recent years with differing opinions.

In February 2019, the court permitted Alabama to execute a Muslim man, Domineque Ray, after the state refused to allow Ray to have an imam at his side in the execution chamber, even though the state at that time allowed a Christian chaplain in the chamber. In its brief order, the court said Ray had sought relief only 10 days before his scheduled execution.

A month later, the Supreme Court prohibited Texas from executing a Buddhist prisoner, Patrick Murphy, unless he was allowed to have a Buddhist priest at his side. In an opinion agreeing with this decision, Justice Brett Kavanaugh pointed out that the state's policy allowed Muslim and Christian inmates to have spiritual advisers with them in the execution chamber, but inmates of other faiths could not have their faith leaders with them.

Catholic inmate Ruben Gutierrez challenged that policy in federal court and last year the Supreme Court put his execution on hold and directed the District Court to determine whether allowing an inmate to choose a spiritual adviser would jeopardize the security said to be needed during an execution.

This past January, after the District Court concluded that a spiritual adviser would not in fact affect an execution's security, the Supreme Court sent Gutierrez's case back to the lower courts. Texas then revised its policy to once again allow spiritual advisers in the execution chamber.

In the current case before the Supreme Court, Ramirez wishes to have Pastor Dana Moore of the Second Baptist Church in Corpus Christi, pray aloud and lay hands on him during his execution, but the state prison has said Moore can only stand silently in the execution chamber and cannot touch Ramirez.

For the past five years, Moore has been a spiritual adviser for Ramirez who stabbed a convenience store worker to death when he was 20 in a robbery that amounted to only $1.25. 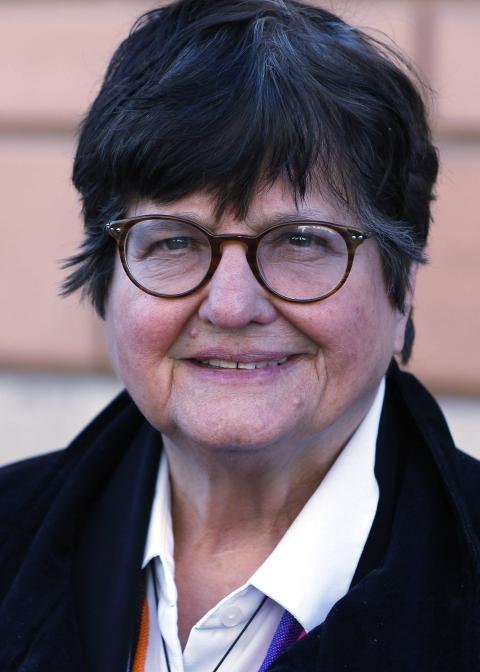 Sr. Helen Prejean, a Sister of St. Joseph of Medaille, is seen in this 2016 file photo. A longtime opponent of the death penalty, Sister Prejean is part of a amicus brief filed with the U.S. Supreme Court in the case of a death-row inmate who wants his spiritual adviser to pray with him and lay hands on him during his execution. (CNS photo/Paul Haring)

Moore told the Baptist Press this summer that his role "is to be a minister to John" and to comfort him.

The brief cited two women religious and a priest, along with a Muslim, Buddhist and Unitarian Universalist. Sr. Helen Prejean, a Sister of St. Joseph of Medaille, who is a longtime opponent of the death penalty, is part of this brief, joined by Sr. Barbara Battista, a Sister of Providence of St. Mary of the Woods in Indiana, and Benedictine Father Mark O'Keefe.

These faith leaders said their presence during executions is "critical to respecting the dignity and religious freedom rights of the prisoner" and that prohibiting them from praying aloud or placing hands on a prisoner during an execution "is not necessary from a security standpoint."

Prejean has served as a spiritual adviser for six executions. During the 1997 execution of Joseph O'Dell in Virginia, she stood beside him with her hand on his shoulder while she prayed aloud.

Father O'Keefe was present at the federal government's execution of Dustin Honken in 2020. Just before the inmate was given his lethal injection, the priest performed last rites, giving Honken Communion, praying aloud with him and anointing him with holy oils.

Battisa also was present at two federal executions last year, for Keith Dwayne Nelson and William Emmett LeCroy, where she spoke with both men. She prayed aloud with LeCroy, reciting portions of the Divine Mercy Chaplet, which they had talked about. 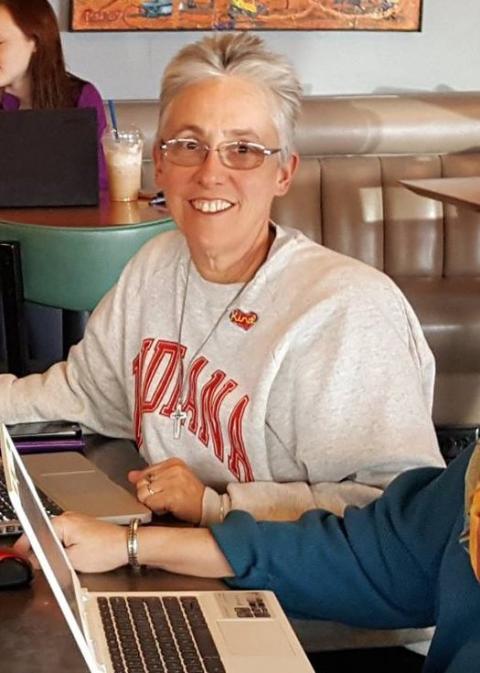 Sister Barbara Battista, a member of the Sisters of Providence of St. Mary-of-the-Woods, Ind., is seen in this 2017 file photo. Sister Battista says the presence of a death-row inmate's spiritual adviser during an execution is "critical to respecting the dignity and religious freedom rights of the prisoner." (CNS photo/Global Sisters Report)

According to the brief, she continued her audible prayers until he stopped breathing then she blessed his body and, as she did with Nelson, anointed him with oils.

The inmates had not requested physical touch, but she said she views this as "an act of love and care that provides spiritual comfort during the individual's return to God and religious affirmation that the individual -- despite any misdeeds -- is loved by God."

The brief goes on to point out that spiritual advisers saw their role as "not simply to stand by mutely, but to minister to the prisoner as he meets death, providing spiritual comfort and a final opportunity for the individual to engage with his faith at the most critical time."

At a recent panel discussion on the death penalty, Prejean said whenever she has attended a prisoner's execution, she felt she was there to show the "dignity of their human person" especially after they had "received thousands of signals that they are a waste."

"I am that one face, that one person," recognizing their human dignity, she said.

The U.S. Conference of Catholic Bishops also filed an amicus brief in this case joined by the Texas Catholic Conference. They said the role of spiritual advisers to prisoners "is of particularly grave importance at the moment of death" and also noted that this guidance is "constitutionally protected from government interference."

The bishops said for the state to allow Ramirez spiritual assistance does not "render his execution a just act" or essentially give a blessing to it.

They also stressed their direct opposition to the death penalty itself, saying they have "long abhorred the practice of state-sanctioned executions of human beings," which represents a "final, irrevocable termination of a gift from God" and indicates that a person "is beyond redemption."

"That is a judgment the Catholic Church rejects," the bishops said. "The state should act with justice by sparing Ramirez's life. If it will not, it should allow him to seek the mercy of God at the moment of his death."