by Dan Stockman
News
This article appears in the Synod on Synodality feature series. View the full series. 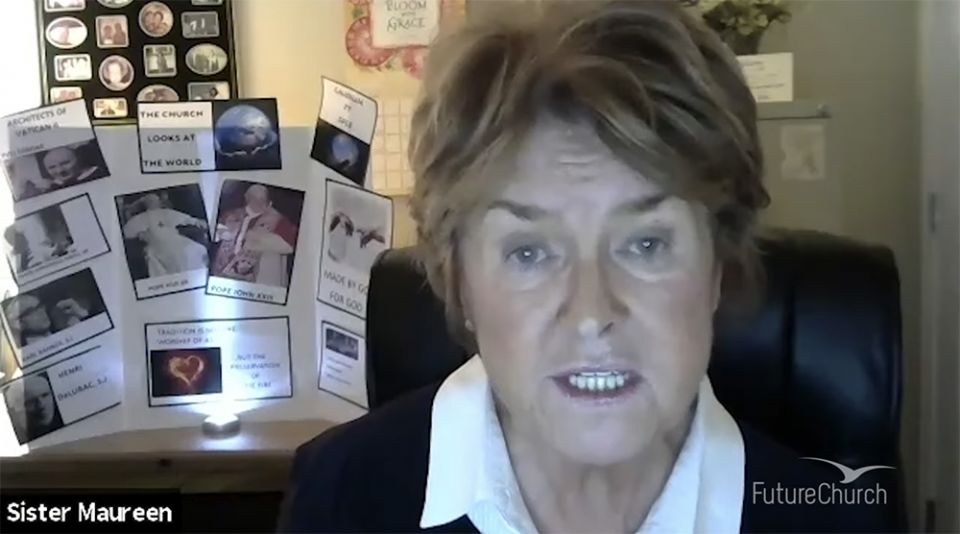 FutureChurch, the Catholic Reform organization, is offering a four-part series examining the synod on synodality.

Dominican Sr. Maureen Sullivan will use the four video sessions to examine Vatican II, the synod, and the future of the Catholic Church. FutureChurch calls the upcoming synod most important gathering in the recent history of the church and the most promising since the Second Vatican Council.

"Vatican II produced a charter for the Church to move from the rigid, hierarchical model espoused by Pius IX at Vatican I (1869-70) to the collegial, 'communio' model that emerged under John XXIII," the announcement for the series says. "Pope Francis has invested enormous energy in moving the church back on course with his emphasis on Vatican II. The 2023 Synod is the culmination of his efforts offering the promise of an authentically synodal church where women, and men, both lay and ordained, led by the Spirit, guide and shape the direction of the church."

The series will examine a number of Vatican II documents to understand how Vatican II serves as the foundation for the 2023 synod. The series is free, but you must register.

Also preparing for the synod is the International Union of Superiors General, whose 2022 Plenary Assembly is focused on the two-year process.

As part of the process, the organization has been soliciting testimonies from sisters around the world, including two American sisters who are members of Giving Voice, Felician Sr. Grace Marie del Priore, and Dubuque Franciscan Sr. Sarah Kohles. You can read all the testimonies, which center on the plenary's theme of embracing vulnerability on the synodal journey, here.

And, of course, there is much more about the synod at Global Sisters Report: This month's The Life is focused on the synod, and you can find all of the coverage by both GSR and National Catholic Reporter on our Synod on Synodality page.

This year's "challenge theme" is Laudato Si' — events do not have to be related to "Laudato Si', on Care for Our Common Home," but can be for those wanting to cover two topics with one event. Organizers note that while events can be in-person or virtual, going virtual allows for creativity, such as Zoom conversations and conferences, Instagram takeovers, livestream events on Facebook, virtual tours, book discussions, interviews and photo galleries.

A backlog in cases at U.S. Citizen and Immigration Services has prompted Catholic Legal Immigration Network to issue a brief outlining policy recommendations to prevent religious workers from being removed from service.

Due to systemic issues and delays at the federal agency, immigrant religious workers — many of whom are sisters — have been forced to stop working or even leave the country while they wait for their paperwork to be processed.

"U.S. religious organizations who employ foreign-born workers are seriously understaffed due to processing delays and faulty USCIS policies," Elnora Bassey said in a statement. Bassey, who co-authored the brief, is a policy advocate and former religious immigration attorney at CLINIC. "Losing religious workers — who teach, visit the sick and shut in, officiate weddings and funerals, or provide support where needed — is simply damaging to American communities, especially during the pandemic."

"Churches are having to cancel or alter their hours for services, confession and community activities. Hospitals are without chaplains. Schools are missing teachers. Short-staffed community centers are stretched thin as they try to serve the most vulnerable," Turngren wrote. "These are essential jobs and essential workers, and USCIS should change course immediately to treat them as such."