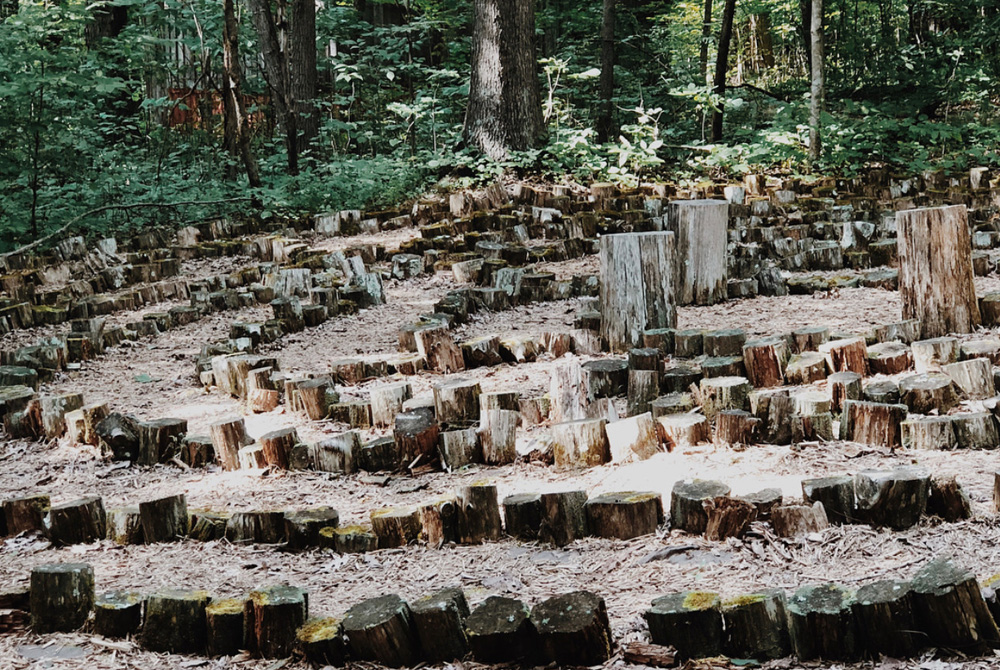 The labyrinth at the Cedars of Peace retreat center in Nerinx, Kentucky (Photo courtesy of Amy Maltz)

Global Sisters Report asked congregations in the United States, Canada and Ireland about their retreat centers and how they were affected by the COVID-19 pandemic, its lockdowns and various restrictions. Here is a sample of their reports.

Cedars of Peace consists of seven cabins for short- or long-term solitude in the woods of the Loretto motherhouse in Nerinx, Kentucky. Cedars only closed for five months in 2020 because it was easy to create protocols to keep retreatants safe — after all, people go there for solitude. There were three guests staying long term when the pandemic began, and allowing them to continue to stay provided enough income to keep the venture going until it could officially reopen.

The community has found that the pandemic has made even more people interested in seeking out places where they can experience a sense of grounding; there is so much chaos and instability that a variety of people from different faith traditions or no particular tradition at all seek the quiet beauty of nature.

The Sophia Spirituality Center reopened to private retreatants in June 2021 and reopened to groups in Triduum 2022. They are a monastic community and have a nursing home on-site, so their regulations were much stricter. They now offer a mix of Zoom and on-site retreats, with the online option reaching people around the world. The loss of income during the closure was difficult and meals have been an issue, but they were able to honor their commitment to not lay off employees.

Read this next: Sister-run retreat centers survive by pivoting as the pandemic continues

The order has a small retreat center and two hermitages, both of which reopened in 2021. The Spirituality Center now offers in-person and virtual programming, which draws people from across the country. Revenue dropped during the pandemic, but the center is financially supported by the congregation.

The Tau Center recently reopened to in-person events again and now offers hybrid events, with both in-person and online participants. Though the center was closed for much of the last two and a half years, the grounds continued to be a place of contemplation for visitors, and the center switched from in-person to online programming.

Sisters of St. John of God

The order's Ballyvaloo Retreat and Conference Centre in County Wexford, Ireland, fully reopened in June 2021 under strict pandemic protocols, which have since relaxed. Like other congregations, they have seen a marked increase in those seeking space for reflection and recovery.

Sisters, Servants of the Immaculate Heart of Mary

Before March 2020, the congregation had been planning to move toward offering online and hybrid events; the pandemic moved up those plans. In addition to online programs, they also offered training to spiritual directors on how to do remote spiritual direction. They also connected with other centers for mutual support, including the Adrian Dominicans' Weber Center. Even when in-person events were offered in 2021, many people were reluctant to go to group events, which continued both the need for online programming and the financial difficulties.

Missionary Servants of the Most Blessed Trinity

The congregation has three retreat centers, all of which have now reopened. Their general councilor, Sr. Deborah Wilson, remarked on how important sister-run retreat centers are: "If every retreat center that is only open because a religious congregation is financially supporting it were to close overnight, there would be almost no retreat centers left standing. We're filling a real spiritual need in a way parishes and dioceses simply can't. Because we believe in the need for such places so much, we're really striving to keep them open," she wrote in an email to GSR. "I am afraid most people have no idea, but they would miss us if we were gone, I am sure of that."