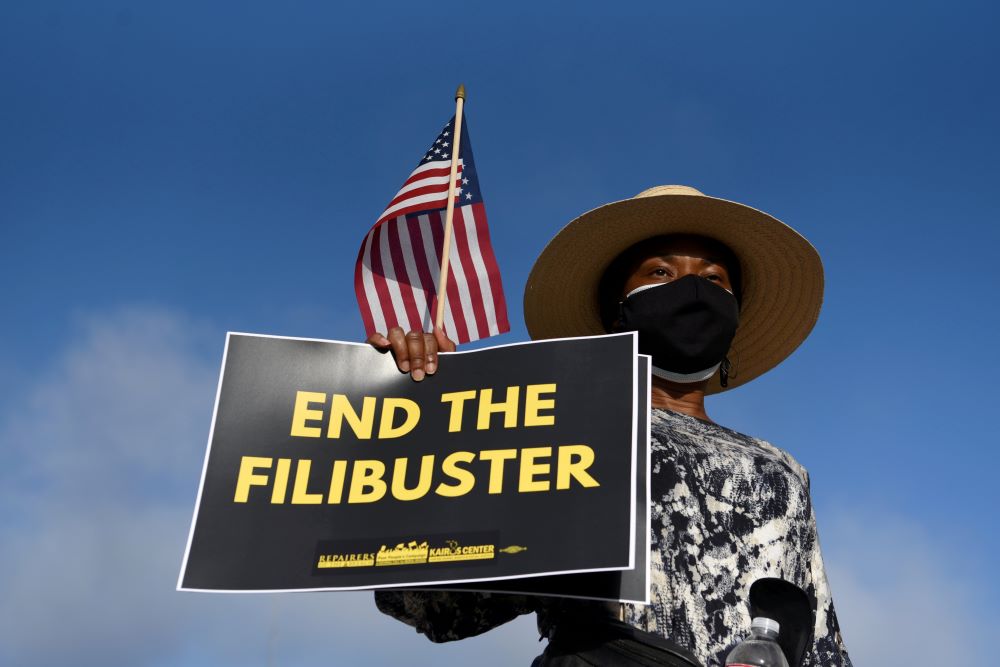 A protester holds a sign ahead of a July 31 march for voting rights in Austin, Texas. (CNS/Reuters/Callaghan O'Hare)

Catholic sisters are among those working for passage of the Freedom to Vote Act, a package of federal voting reforms introduced Sept. 14 meant to protect voters' rights and roll back state attempts to restrict or suppress voting.

Sr. Quincy Howard, coordinating director of advocacy, outreach and campaigns for the Faithful Democracy coalition and a government relations advocate at Network, a Catholic social justice lobby, said months of efforts by the faith community is paying off.

"This bill represents a coming together to find a path forward for badly needed reforms. Leaders from an array of faith traditions applaud today's introduction of the Freedom to Vote Act," Howard, a Dominican Sister of Sinsinawa, Wisconsin, said in a Sept. 14 press release. "While Democrats are working to win support from their colleagues across the aisle, passage of this legislation cannot wait. If Republicans refuse to support these needed reforms, then Senate leadership must find a way to pass this legislation. There is no time to waste and our democracy is too important."

Stephen Schneck, executive director of Franciscan Action Network, said voting restrictions are aimed at the very voters Christians are most called to serve.

"The Gospels say we are measured by what we have done for those in poverty, the discriminated against, the vulnerable, those whom society has made powerless, excluded, and disenfranchised," Schneck said in a Sept. 14 written statement. "Yet, today that Gospel message is threatened by state laws seeking in subtle and not so subtle ways to deter the impoverished and marginalized from voting. Federal legislation is needed to address these shameful challenges." 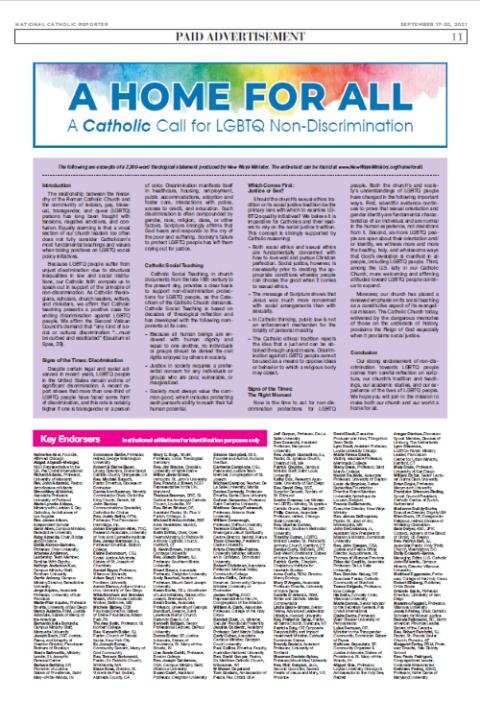 A Home for All: The first page of a four-page advertisement in the Sept. 17 print edition of the National Catholic Reporter that featured more than 2,000 signatories to New Ways Ministry's "A Home for All" statement (GSR screenshot)

A show of support for the LGBTQ community

Many Catholics are also speaking out in support for measures to protect LGBTQ people from discrimination.

"A Home for All: A Catholic Call for LGBTQ Non-Discrimination" was published as a four-page advertisement in the Sept. 17 print edition of the National Catholic Reporter and included more than 2,000 signatories, including 115 Catholic organizations. At least 48 of those were congregations of women religious. Among the individual signatories were St. Joseph Sr. Helen Prejean, Social Service Sr. Simone Campbell, Mercy Sr. Margaret Farley, and St. Joseph Sr. Elizabeth Johnson.

"By supporting civic policies that promote discrimination and by opposing policies that would produce equality, these leaders bypass the Catholic Church's proud social justice tradition, the product of more than a century's development of social doctrine that increasingly supports the human rights of all people without exception," it reads. "As Catholic theologians, scholars, church leaders, writers, and ministers, we affirm that Catholic teaching presents a positive case for ending discrimination against LGBTQ people. We affirm the Second Vatican Council's demand that 'any kind of social or cultural discrimination... must be curbed and eradicated' (Gaudium et Spes, 29). We affirm that Catholic teaching should not be used to further oppress LGBTQ people by denying rights rooted in their inherent human dignity and in the church's call for social equality."

The statement was produced by New Ways Ministry, a national Catholic ministry of justice and reconciliation for LGBTQ people and the church.

"Society's failure to protect LGBTQ people has left them crying out for justice," the statement says. "As disciples of Jesus Christ, we too must hear and respond to this cry by pursuing policies and laws that remedy such grave injustices. To do any less would abdicate our responsibility as Christians to live the Gospel in public life by advancing the good of all people, especially those on the margins."

Maryknoll Srs. Beatrice Meyer and Mary Rose Leifels at an orphanage in Yeung Kong, China, in 1937 (Courtesy of the Maryknoll Sisters)

A milestone for the Maryknoll Sisters

The Maryknoll Sisters are celebrating a century of ministering in China.

The congregation has created an extensive website for the occasion, with many photos, biographies of those first sisters, and even portions of their travel diaries.

There are also photos of the sisters currently ministering in China and a video of the work the sisters have done there. Between 1921 and 2004, 210 Maryknoll sisters served in Hong Kong, working in health care and as teachers and social workers.

The second season of "Hearts Afire" has begun.

A project of the Sisters of St. Dominic of Blauvelt, New York, the podcast launched in March with a first season of 10 episodes. Each episode streams live on YouTube and afterward is made available on Apple Podcasts, Spotify, and Audible.

The first episode of the second season premiered Sept. 16 and featured Sr. Maggie McDermott discussing her ministry at the Tolentine Zeiser Community Life Center in the Bronx in New York City and reflecting on the importance of education.

New episodes will premiere every other week and will include: