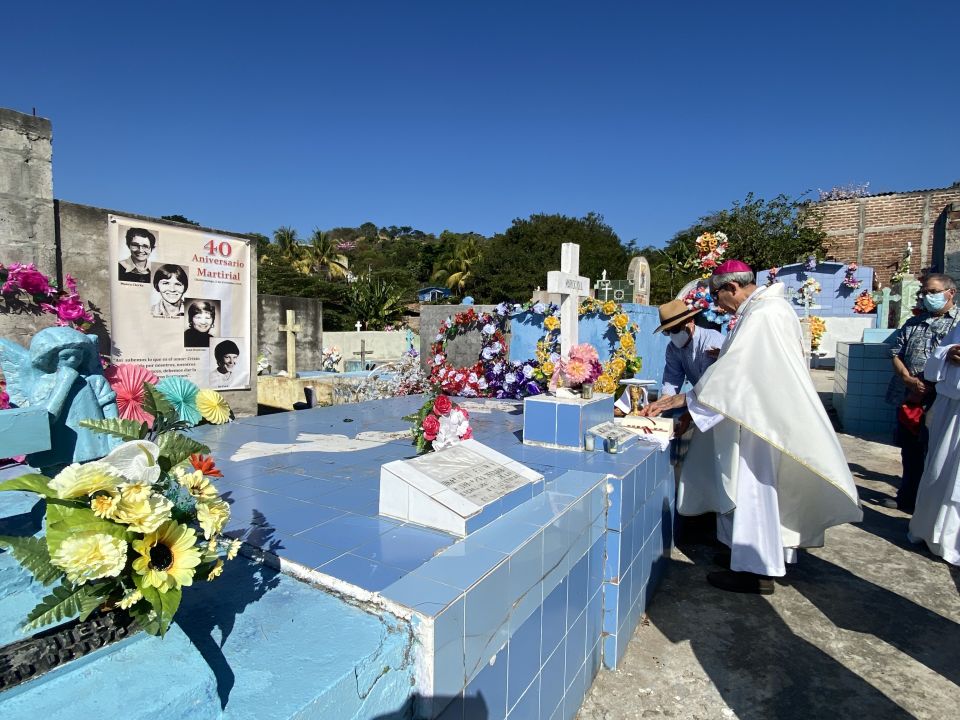 Retired Auxiliary Bishop Octavio Cisneros of Brooklyn, N.Y., celebrates Mass in Chalatenango, El Salvador, Jan. 20 2022 at the tombs of two U.S. women religious who were killed in El Salvador in 1980. The tombs of Maryknoll Sisters Maura Clarke and Ita Ford served as the altar for the celebration of the Eucharist. (CNS photo/Rhina Guidos)

Chalatenango, El Salvador — Representatives from the U.S. Conference of Catholic Bishops celebrated Mass Jan. 20 at the tomb of two Maryknoll sisters from the U.S. buried El Salvador -- where they were murdered in 1980 -- and called them "martyrs" and "models" for the Catholic Church.

The U.S. representatives are on pastoral visit to El Salvador for the USCCB's Subcommittee of the Church in Latin America, for which Cisneros is the chairman.

"For me, it's a pleasure to be here, and to celebrate this Eucharist, because they both were from my diocese," Cisneros told a small group of priests who gathered near the tombs.

Ford and Clarke were serving a mission during a time of civil strife in El Salvador in 1980 when, along with Ursuline Sister Dorothy Kazel and lay missionary Jean Donovan, also from the U.S., they were tortured, raped and murdered by Salvadoran military forces Dec. 2, 1980.

Escobar told Catholic News Service Jan. 21 that Salvadoran bishops are working on a canonization cause for "martyr friends/companions," which will include the four women, as well as foreign-born priests, such as a group of Spanish-born Jesuits assassinated in 1989 and other Salvadoran Catholics slain during the country's civil war.

Following the Maryknoll custom of being buried where they served, the bodies of Ford and Clarke are among other victims of war in the Chalatenango cemetery, where local Catholics celebrate a feast of local martyrs on the day the women died, even though they are not official church martyrs.

Cisneros placed the Book of the Gospels and the Eucharist on top of their tombs, decorated with tiles in the shape of white doves. A third U.S. Maryknoll missionary, Sr. Carla Piette, who died in Chalatenango during a flash flood, also is buried there.

"It was very meaningful to have had a bishop from Brooklyn and the area where these martyrs were from, here," Escobar told CNS. "I think the Holy Spirit opens the path for causes that once seemed uphill or full of obstacles. It was beautiful that we were able to celebrate in an extra-official manner, not planned, days after the Salvadoran bishops' conference, in its last meeting Jan. 19, decided to begin working on a cause for martyr companions of St. Oscar Romero." 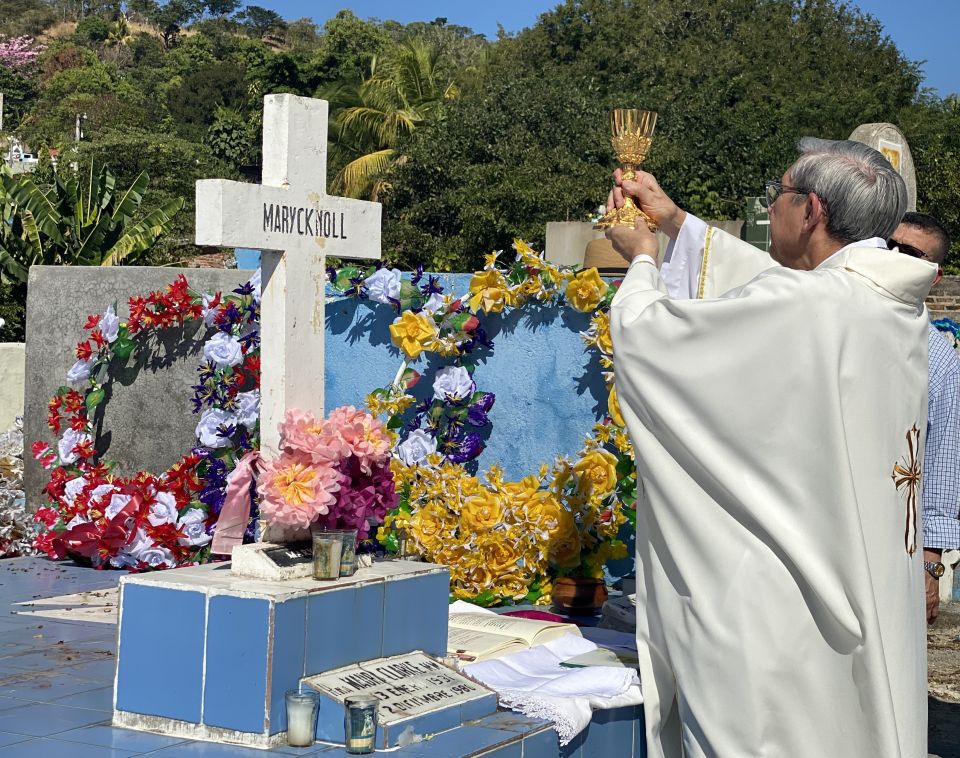 Retired Auxiliary Bishop Octavio Cisneros of Brooklyn, N.Y., celebrates Mass in Chalatenango, El Salvador, Jan. 20, 2022, at the tombs of Maryknoll Sisters Maura Clarke and Ita Ford, which served as the altar for the celebration of the Eucharist. The two sisters were among the four churchwomen slain in El Salvador by Salvadoran military forces Dec. 2, 1980. Salvadoran bishops are working on a canonization cause for "martyr friends/companions," which will include the four women, as well as foreign-born priests and Salvadoran Catholics slain during the country's civil war., (CNS photo/Rhina Guidos)

Cisneros said that, for most people, it's difficult to understand the word of God, which spells out what people need for a happy life -- humility, mercy, forgiveness, peace, justice and giving of one's life -- because it goes against what other forces tell people they need to be happy.

"The message of Christ tells us the opposite," he said. "And it's so difficult to understand, but there are men and women, who, with grace, can understand it the way Maura, Ita, Jean and Dorothy understood it."

The women were known for shuttling injured Salvadorans to safety, including many children, between the towns where they served, getting them food, medicine, a smile, a hug, safety, during hardship. Since they were from the U.S., they could travel more freely through the roads controlled by Salvadoran military forces, and, many believed, more safely.

But during a trip from the airport, where Donovan and Kazel had picked up Ford and Clarke after a conference, soldiers stopped the van they were traveling in, and the women were not seen alive again. Their bodies were later located in a shallow grave. Some U.S. government officials seemed dismissive of the crime, almost suggesting that the women religious and Donovan were involved in subversive activities.

Cisneros said that when people try to follow the Gospel, "there will be criticism," and, for the women, "they suffered criticism, that they were communists, that they belonged to certain ideologies."

"But the Gospel is not an ideology, the Gospel is a divine way of love," he said during his homily. "How they suffered, not just by the weapons that took away their lives but with the criticisms of so many ... when we start calling people names, it says more about us than them."

Perez, who is  director for the USCCB's collection for Latin America, said he was happy to take part in the Mass.

"We don't want that to be the last time that we bring the Eucharist to the sisters," he said. "How happy and historic that was."

Escobar said Masses have been celebrated at the spot where they are buried but the tombs had not, to his knowledge, been used as an altar.

"It had the sense of how the first Christians celebrated," he said, adding that it was even more special since a bishop from their part of the world was present.

"May they be models for all of us, for priests, bishops, laity, for how to carry out our lives focused in another direction," Cisneros said. "May this be a moment of grace for us, to live in holiness."