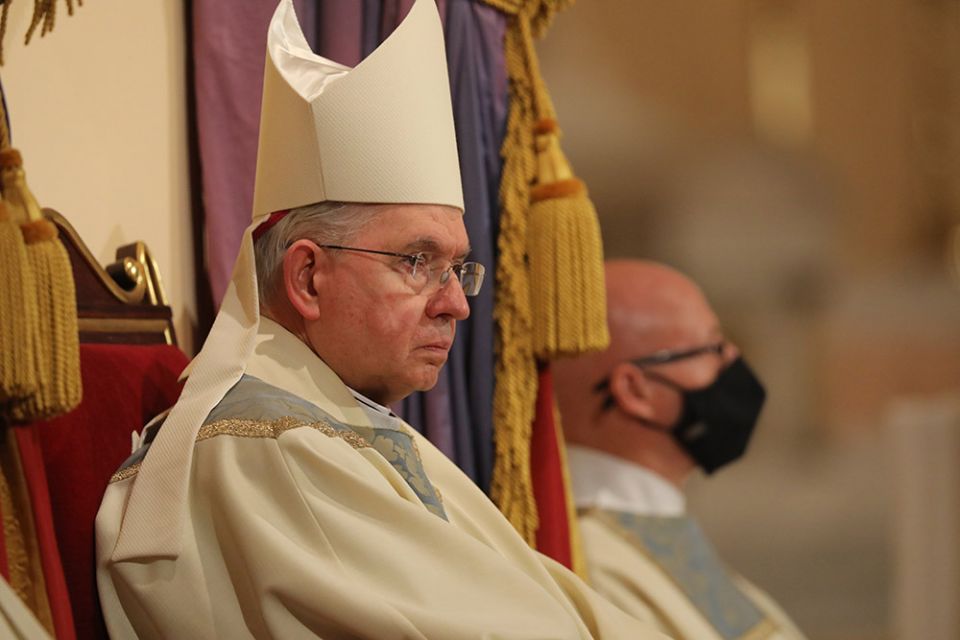 Los Angeles Archbishop José Gomez, president of the U.S. Conference of Catholic Bishops, sits in the cathedra, or bishop's chair, as he concelebrates Mass at the Basilica of the National Shrine of the Assumption of the Blessed Virgin Mary Nov. 15 in Baltimore during the bishops' fall general assembly. (CNS/Bob Roller)

Gomez, the president of the U.S. Conference of Catholic Bishops, made the statement Nov. 4 in a speech to a Catholic group in Spain, bringing swift condemnation from Black Catholics. Gomez argued that modern social justice efforts, including the anti-racism movement, "cannot promote authentic human flourishing" because, he said, they "deny the human person."

The National Black Sisters' Conference, in a statement published by Black Catholic Messenger, said anti-racism efforts are not only far different than Gomez characterized them, they are in line with the Gospel.

"BLM is not a pseudo-religion; nor is it a 'dangerous substitute for true religion.' It is a movement very much in the tradition of Catholic Social Teaching," the Nov. 16 statement said. "It does not nor has it ever 'served as a replacement' for 'traditional Christian beliefs.' "

The statement, signed by National Black Sisters' Conference President Sr. Josita Colbert, a Sister of Notre Dame de Namur, pointed out the disconnect between the call to respect life while condemning the Black Lives Matter movement:

If respect for life is the primary issue of our time, then we would certainly have hoped that you and the Bishops' Conference would surely understand that it is paramount that we lift up and support Black life as a precious gift from God that should be protected not only in the womb but throughout life until death.

We would have expected that you and your brother bishops would have stood in solidarity with your African-American brothers and sisters; representing the compassionate face of Christ.

For the most part, you have remained mysteriously and regretfully silent; often failing to call out hate groups for their racist ideologies and violence.

"We are especially troubled by your comment: '... the Church has been antiracist from the beginning.' With all due respect, Archbishop, do you not know the history of the Church's involvement with the slave trade, with the segregation of churches; with black people often being relegated to the back of churches and forced to receive Holy Communion after white parishioners; and the rejection of black men and women who desired to enter seminaries and religious communities?" the statement says. "Over four hundred years of slavery, trauma, pain, disenfranchisement, and brutal violence have been a part of the fabric of this nation and the American Catholic Church." (Links in original.)

The statement says the National Black Sisters' Conference leadership would welcome the opportunity to meet with Gomez "to pray together and to have a much-needed and honest conversation about race relations."

In the meantime, the statement says, "We respectfully encourage you to rethink your ill-advised remarks and rescind them. If we intend to proclaim the authentic gospel of Jesus, we must acknowledge our sinfulness as a Church as it pertains to the sin of racism and give more than lip service to combatting racism in our Church and nation."

Joining in the chorus of criticism of Gomez's speech was the Southern California Partners for Global Justice, a coalition of religious communities, organizations and agencies working to address global injustices, especially human trafficking.

The group said it works in partnership with the Leadership Conference of Women Religious, U.S. Catholic Sisters Against Human Trafficking, and groups that oppose the death penalty, advocate for humane immigration policies, work for just wages and protect the Earth.

"We cannot understand your characterization of our commitment and ministries as anti-Christian," the Nov. 12 statement said. "It is our belief that, as faithful people, we are responding to Jesus' call within the Church's teachings on social justice; we are responding with integrity, fulfilling our role, as Pope Francis has outlined, to work for justice and peace."

The statement, signed by 23 people, including 17 sisters, says they hope Gomez will correct the record: "We regret your mischaracterization of our mission in service to God's people as un-Christian; we trust that you will take steps to assure the faithful that Catholics who work for justice and peace are truly acting as Christians, doing God's work in the world."

In Congo we endure conflict, COVID-19 and confinement