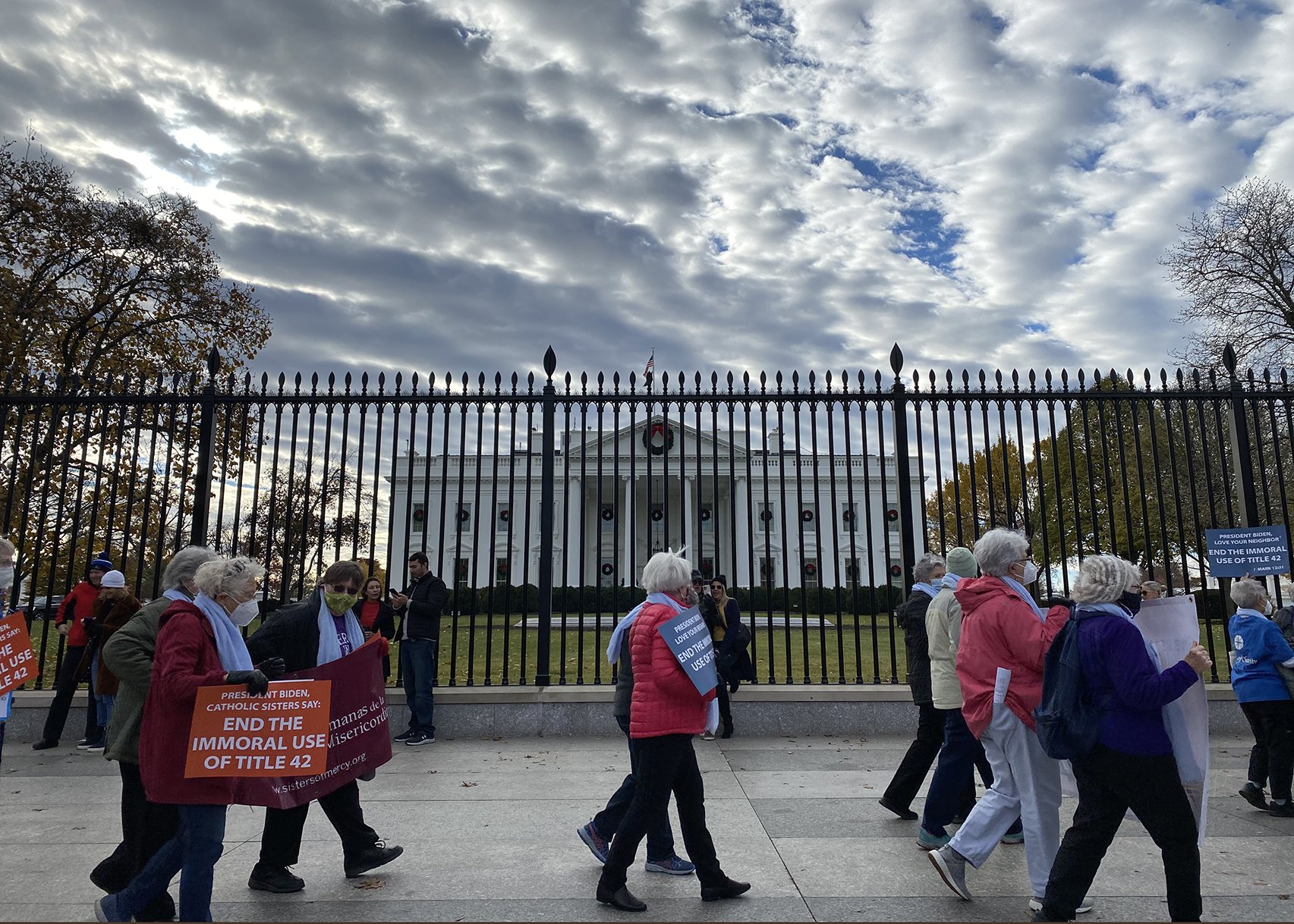 Members of 24 congregations of women religious from around the country gather outside the White House Dec. 3, 2021, to demonstrate against President Joe Biden's continuation of Title 42 expulsions. Title 42 is a provision of the U.S. public health law that Trump administration officials implemented to keep migrants out as COVID-19 infections began rising in the U.S. in 2020, and it has remained in place during the Biden administration. (CNS photo/Rhina Guidos)

They sang Advent hymns in front of the White House Dec. 3, hoping to get the ear of the president so he could consider lifting what they see as a health rule that hurts people trying to find refuge at the southern border.

Along with a large group of supporters and associates, about 80 women religious from 24 congregations around the country marched and circled an area in front of the White House singing and carrying signs that read: "Catholic Sisters say: End the Immoral Use of Title 42."

What they were referring to was Title 42 of the Public Health Safety Act, a policy the Trump administration began using in March 2020 as knowledge of rising infections of the coronavirus began to surge in the U.S. -- and around the world. The Biden administration has kept it in place to the consternation of immigration advocates, who say the rule is just another pretext to keep migrants out.

"We gather this morning as one family in you, in solidarity with everyone who you guided to flee their homes and journey to this land in search of a safe and fruitful life," Mary J. Novak, executive director of Network, said in an opening prayer.

Network, a Catholic social justice lobby, was one of the groups that organized the event.

Along with a group that included Sisters of Mercy, Ursulines, Maryknoll, Comboni Missionaries, Dominicans, Sisters of St. Francis, among others, and several groups that work with migrants, such as the Jesuit-run Kino Border Initiative, the Catholic Legal Immigration Network Inc. and the Haitian Bridge Alliance, the demonstrators shouted with a microphone from a public park in an area in front of the president's residence.

Some kept walking in front of the White House as others gathered to talk about the reasons that had moved them to join the group.

Novak recalled the Advent journey of the Holy Family, who had to flee, looking for refuge, comparing it to the situation of present-day migrants trying to find similar safety, but from gangs, poverty and different kinds of violence.

"We pray for our national leaders, the president and his administration, to open their hearts to the suffering of our siblings at the border whose human dignity is being denied," she said. "Please guide us, merciful God, in our sacred work to end the rules and practices that are causing such suffering to our human holy family."

Biden administration officials have said it's up to the Centers of Disease Control and Prevention to decide when to lift Title 42, since it's not an immigration policy but a public health measure. With a lack of control over the coronavirus, advocates worry that concerns over variants, such as omicron, will only be used politically to further rules and measures that keep migrants out even as their plight only worsens.

"A new COVID variant is never a good thing, obviously for public health, but definitely from a perspective that it can be weaponized and used as an excuse by the government to extend Title 42 and other border policies," said Chelsea Sachau, of the Florence Immigrant and Refugee Rights Project.

Sachau was quoted in a Nov. 30 article on the website of Fronteras Desk, a collaboration project run by various radio stations in Arizona.

Sister Tracey Horan, a member of the Sisters of Providence of St. Mary-of-the-Woods in Indiana, and associate director of education and advocacy for the Kino Border Initiative, told of the human toll her organization has seen at the border caused by Title 42.

She spoke about a family of five from Guatemala traveling north because of economic conditions and worries that their children would become involved with gangs or suffer violence at home.

"Upon arrival they quickly learned that Title 42 would block them," she said.

Seeing no other way to come across, they took to the river as the father carried a toddler but lost control in the current. A diaper kept the child afloat long enough for her brother to grab her and pull her to safety. But the father floated down the river and was caught by Border Patrol agents, she said.

"This is the kind of desperation that Title 42 causes," she said. "Because migrants are no longer allowed to apply for asylum, they feel they have no alternative. That's a risk. The only chance they have is going back to where they came from, but it is not an option."

As long as the Biden administration keeps Title 42 in place, "they are emboldening organized crime and are directly responsible to deaths of men, women and children seeking protection at the southern border," she said.

Ronnate Asirwatham, government relations director for Network, said Title 42 wasn't the only method the administration has used to keep migrants out.

She referenced the Biden administration's announcement it is reinstituting the Migrant Protection Protocols, a Trump-era policy that keeps migrants waiting on the Mexico side until their asylum cases can be heard by U.S. immigration courts.

Although the Biden administration had ended the protocols earlier this year, in August a judge with the U.S. District Court for the Northern District of Texas told administration officials they had to continue the policy, saying officials had not ended it properly.

On Aug. 24 the U.S. Supreme Court refused to block the judge's ruling and ruled the administration had to restart the policy.

It resumed Dec. 6 at one location -- with others to follow -- and local reporters said about 30 people had been sent back to the Mexico side on its first day.

"As justice seekers, as Americans, but especially as Catholics, we are ashamed that President Biden has locked the door at our southern border to our immigrant siblings," Asirwatham said. "We are here today to show our love and our solidarity."

A man in his 30s named Santiago told the crowd his story of fleeing Honduras, subsequently traveling to Mexico, where he lived for 11 years until it, too, became too dangerous to live. A person was burned alive in front the house he and his family shared, and they made a decision to leave, he said. But not all were able to cross to the U.S.

Those gathered near the White House asked Biden to put himself in the shoes of the migrants stuck on the other side of the border with family as criminals surround them.

"What I want most to say to President Biden and to all of you today is that we know things do not have to be this way," said Sister Horan. "This is a conscious choice we are making as a nation."

She said immigrant advocates were not asking for a complete dismantling of the immigration system but simply asking for restoration system of asylum, humane treatment and due process.

"My prayer is that we don't just wait and hope for the light of the world to come," she said. "But that we (make) the conscious choice to help it shine brightly by the way we receive our migrating sisters and brothers."