A fourth community of women religious has raised its voice over Cardinal Timothy Dolan's approving public remarks of President Donald Trump in a phone call addressing cardinals, bishops and hundreds of Catholic leaders.

The Sisters of Charity of New York, based in the Bronx just 13 miles from the Archdiocese headquarters, wrote in a May 13 letter that they were disappointed by Dolan's support because they believe "we must never relinquish our responsibility to advocate for the least among us when presented with an opportunity."

They also noted that Sisters of Charity have been teaching Catholic values such as truth and honesty for more than 200 years. "When Church leaders disregard President Trump's lack of honesty and integrity while he holds the highest political office in our nation, we abdicate our sacred responsibility to the faithful," they wrote.

The sisters said they shared Dolan's gratitude for Trump's support for the unborn but said he and his administration "do not support life for the poor and marginalized, for migrants and immigrants."

Writing that they were "shocked and saddened" by Dolan's April 25 remarks, an open letter by the Sisters of the Holy Names of Jesus and Mary's U.S.-Ontario Province, dated May 13, says they found Dolan's praise "particularly offensive" because Trump so often violates the values they have taught in their schools for 175 years.

"We, as women religious and educators, are confident that when our students list the values they are being taught in our schools and compare them to statements, policies and actions the President expresses and lives by, they will be very puzzled why Cardinal Dolan could consider President Trump an 'inspiring leader,' " the letter says.

They cited Trump's bullying, use of degrading names for those from other countries, promotion of policies that favor the rich, lack of sensitivity for those suffering or in need, and protection of life in the womb but opposition of policies to help families after birth.

The letter, signed by the leadership team, notes it is important and a privilege to speak to the president, but we are also called speak truth to power. 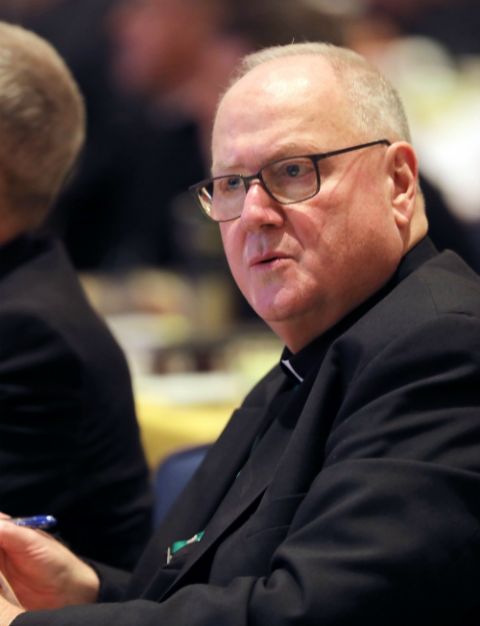 In a May 8 letter to Dolan, the Sisters of Providence of Saint Mary-of-the-Woods, Indiana expressed being "dismayed" by both the cardinal’s praise of Trump and his appearance on Fox News. "Your enthusiastic praise for this president’s leadership was frankly shocking given how many of the Catholic, Gospel values we share are being challenged by the current administration," wrote the sisters.

Roughly 170 women religious signed a separate letter organized by Faith in Public Life, with signatures from more than 1,000 Catholic leaders, including Social Service Sr. Simone Campbell, executive director of Network, and Sr. Pat McDermott, president of the Sisters of Mercy of the Americas.

The leadership team and justice coordinating commission of Sisters of Providence of Saint Mary-of-the-Woods signed the letter, totaling 11 sisters and four associates.

The heart of their concern, they wrote, is not based in partisan politics, but in governmental policy, and "our call as followers of Jesus to speak up for those most marginalized.

"The very person you so lavishly praised as a superb leader has steered his administration into total disregard for climate scientists and the grave warnings they have been promulgating," they said. The president has contradicted the pope's call for global action on behalf of the common home in his encyclical Laudato Si'. Trump has also "blatantly denied the sanctity of life for those on federal death row," they wrote.

The Sisters of Providence noted that they don't presume to know why the cardinal shared such praise for the president:

We do not know what message you may have intended. What was received was an implicit, dare we say explicit, endorsement of this president at a time when he is running for re-election. To have him publicly supported by high-ranking and influential church leaders gives the impression that Catholics should support him. We cannot have the United States citizenry believing that this president's leadership is consistent with Catholic values.

Concluding with a request that he clarify his praise of Trump's leadership, the sisters write that "as religious leaders, we are all called to exercise our influence with integrity and humility. As Catholic leaders we have learned that lesson most keenly these past few decades."

Dolan's comments were recorded in an April 25 phone call with Trump and 600 other Catholic bishops and leaders in which Dolan shared his admiration for the president's leadership. He later repeated that praise in an interview with Fox News, prompting the letters.

Shortly after Trump identified himself as the "best [president] in the history of the Catholic Church," he called Dolan a "great gentleman" and "a great friend of mine," with Dolan responding that "the feelings are mutual."

While the president emphasized his positions on abortion and school choice, the Sisters of St. Joseph of Carondelet said that their concerns were "not a political disagreement," as political differences can still be based on Gospel principles. That Trump expressed verbal support of these two issues, the sisters note, is "designed to create the impression that he supports Catholic values."

Instead, Trump "is notorious for his consistent lying to the public and for poor judgment," they wrote, citing his positions on immigration and migrants that are "directly opposed" to that of the U.S. Conference of Catholic Bishops.

The St. Joseph sisters list their concerns with the president, pointing to both his actions in office as well as his dealings as a businessman prior to his election:

Instead of welcoming or even simply tolerating the "other," our bishops themselves have said that the president sows "polarization and animosity." Instead of offering moral leadership, he is a philanderer whose business activities like Trump University have taken advantage of the poor and vulnerable. The current president exemplifies much of what John the Baptist condemned in the ruler of his day — a prophetic task for which he lost his head but not his integrity.

They conclude with a plea to the cardinal to reconsider his "well-publicized praise and support of this president. It gives the impression that the Church itself stands with him. The scandals of the past few decades call us to a much higher standard."

In an email with Global Sisters Report, the Leadership Conference of Women Religious shared a statement emphasizing the need for moral leadership from church leaders, as the country deals with the repercussions of the coronavirus while heading into a polarizing presidential election:

In the midst of the pandemic, as the country and the world face unprecedented challenges, it is imperative that all faith leaders exercise their public voice and influence with supreme care. ... As we proceed into the election season in a highly charged political environment, clear, thoughtful, and responsible moral leadership is an urgent necessity. As we, Catholic women religious leaders, will carefully discern the exercise of our voices in the discourse about important moral issues in the run-up to the elections, so too we urge all leaders in the Catholic Church to do the same.

Though Campbell "wasn't surprised" by the friendship relationship between Dolan and Trump, the Sister of Social Service told GSR that she found the content of the phone conversation to be "shocking and appalling." While the president may no longer surprise her, she said, what "really disturbed" her was Dolan's "catering to this idea that the president is the best 'Catholic' president ever — that's just ludicrous."

As executive director of Network, she was disappointed that, when given the opportunity on the phone call, "Dolan said nothing about Catholic social teaching: nothing about the treatment of immigrants, the environment, the care for the poor, the effort to kick people off health care — the litany goes on," she said.

"I would think that is a Catholic witness, but there was none of that."

Seeing this as just the beginning of Trump courting the Catholic vote, Campbell said that, while she expects politicians to schmooze, "I also expect church leaders to lift up the fullness of Catholic social teaching."

She also pointed to Pope Francis' exhortation to holiness, in which the pontiff said that while politicians look for votes by saying the right thing, "a Christian has got to stand in the shoes of immigrants," she paraphrased.

"I expect that from our leadership — not this pandering to power."

Death penalty denounced for ignoring people's capability to be 'redeemed'