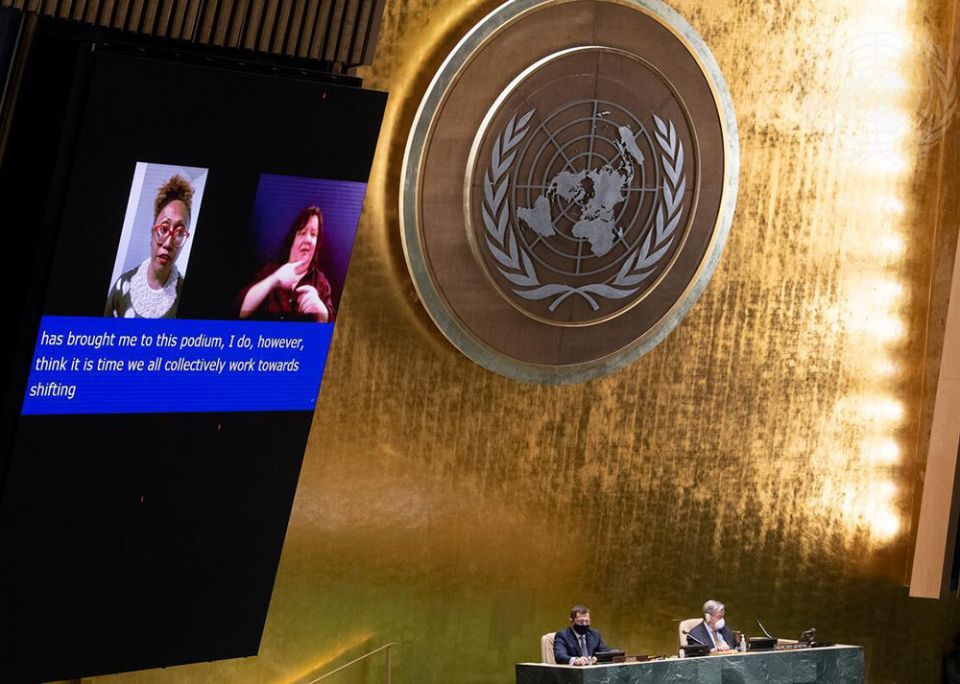 The March 15 opening session of the U.N.'s 65th Commission on the Status of Women was held at the U.N.'s General Assembly, though only a small number of people attended in person because of COVID-19 restrictions, with others joining online. (UN photo)

New York — Despite limitations imposed by the global pandemic, participants in two weeks of United Nations meetings that focused on women's participation in public life and the need to eliminate violence against women and girls praised the event as a necessary step in advancing gender equality.

Participants called the 65th session of the U.N. Commission on the Status of Women a success, but they also noted a sense of impatience with the pace of progress and said the pandemic year has set back the cause of women's equality globally.

This is particularly noticeable in the shadow of the fall's commemoration of the anniversary of the U.N.'s landmark 1995 world conference on women in Beijing.

"Many of the gains since the Beijing conference have been erased by COVID," said Sr. Teresa Kotturan, who represents the Sisters of Charity Federation at the United Nations.

"Women are still being denied their basic human rights," she told Global Sisters Report. "It's still not an equal world."

Phumzile Mlambo-Ngcuka, the executive director of UN Women, the global body's secretariat focused on women and girls, said the meetings served as a clear reminder that women believe "that the past and the status quo have not met their need for gender equality."

But in a March 27 statement, Mlambo-Ngcuka also praised the result of the March 15-26 meetings, which were based at U.N. headquarters in New York and held with heavy online participation. 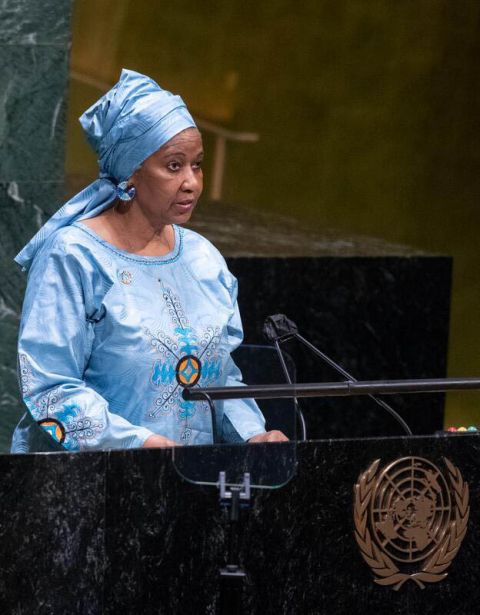 Phumzile Mlambo-Ngcuka, the executive director of UN Women, which serves as the global body's secretariat focused on women and girls, speaks March 15 at the U.N. General Assembly at the opening of Commission on the Status of Women. (UN photo)

She said the meetings' outcome document "recognizes the need to significantly accelerate the pace of progress to ensure women's full participation and leadership at all levels of decision-making in executive, legislative and judicial branches of government and the public sector."

The global pandemic "is deepening pre-existing inequalities that perpetuate multiple and intersecting forms of discrimination, as well as racism, stigmatization and xenophobia," she added.

However, "recent data show that women have been mostly absent from COVID-19 government task forces around the world — women make up only 24 percent of the 225 task force members examined across 137 countries," she said.

In light of that, the outcome document recommends concrete measures that include overturning discriminatory laws and policies and promoting "innovative measures to promote women as leaders, executives and managers, in all areas."

The document also goes beyond generalized statements by calling for gender-balanced targets and timelines in branches of government by "quotas, appointments, or training programs." The document also encourages political parties to nominate an equal number of female and male candidates for public office.

Catholic sisters who participated in numerous online forums held parallel to the formal U.N. events told GSR after the meetings that the event displayed both expected limitations but also new strengths given the change in format.

The 2020 event was suspended during the initial outbreak of the global pandemic, so the fact that the meetings were held at all was a success, they said.

"It was an achievement in the current situation," said Sr. Winifred Doherty, who represents the Congregation of Our Lady of Charity of the Good Shepherd at the U.N. She said the outcome documents from U.N. meetings tend to be weaker than what advocates seek because of the need to find consensus among the broad diversity of U.N. member states. For example, the challenges of women with disabilities were not fully addressed in this year's document.

"The document is always a disappointment," she said.

But, she said, the fact that an estimated 25,000 people globally were able to participate in online sessions was no small feat.

Doherty noted the need for advocacy at local, national and global levels but said she takes hope from all efforts to assist women and girls. She was particularly heartened during meetings about the "power of change at the grassroots."

"I'm always drawn back to what is happening locally," she said.

Kotturan, who like Doherty is a veteran of many Commission on the Status of Women meetings, said the events are "always aspirational." She said gathering tens of thousands of women throughout the world online was encouraging, and the format provided "new participation from throughout the world." 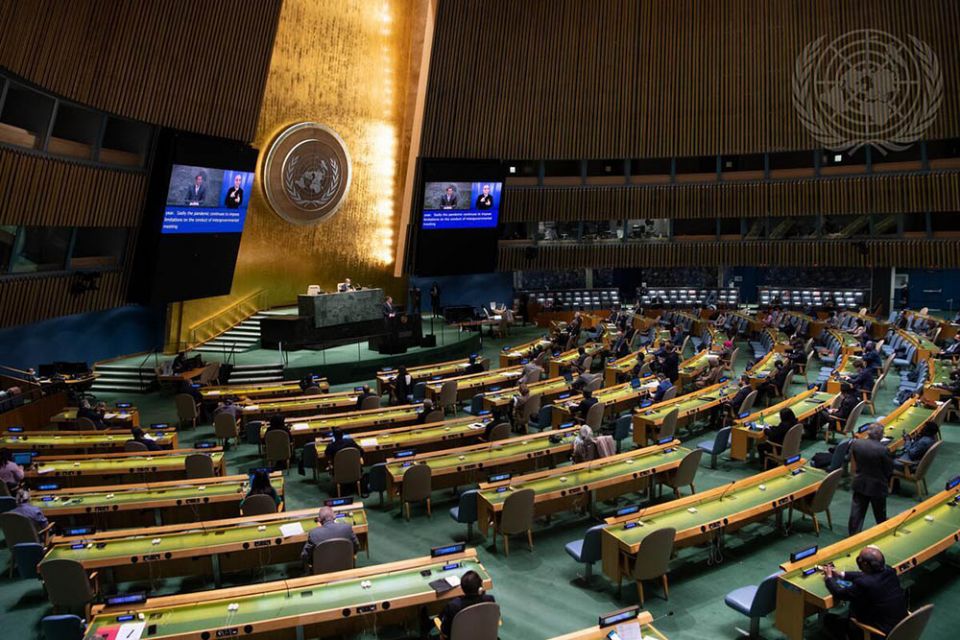 The U.N.'s General Assembly during the March 15, 2021, opening session of the U.N.'s 65th Commission on the Status of Women (Courtesy of the United Nations)

Franciscan Sr. Florence Deacon, who works as justice coordinator for the Sisters of the Holy Cross, said she agrees the global situation for women and girls has become dire this year, given how pandemic-driven lockdowns, loss of jobs, and the burden of family situations have mainly fallen on women. Also deeply troubling, she said, has been the rise of domestic violence globally.

Still, Deacon said she found "resilience and hope" in the testimonies, as well as practical efforts to make change, quoting Martin Luther King Jr.'s belief that "the arc of the moral universe is long, but it bends toward justice." She said that, in her work, she has heard women throughout the world praise the U.N.'s embrace of women's concerns as well as its humanitarian work.

"I have heard women from Africa and Asia say the work of the United Nations has changed their lives," Deacon said.

Deacon moderated one of the online parallel events, a March 22 workshop that examined the issue of domestic violence. The event was co-sponsored by a number of groups, including the Sisters of the Holy Cross and the advocacy alliance Vivat International, which represents sisters, brothers and priests from 12 religious congregations.

Central American women seek refuge in Mexico because of ongoing political and economic crises; in the Rwenzori region of western Uganda that borders the Democratic Republic of Congo, women face sexual violence in the context of ongoing war and civil unrest.

Mbambu said her congregation assists women with medical care, counseling and skills development. In Chiapas, Mexico, Hernández works in a shelter addressing the needs of asylum-seekers, migrants and refugees.

The pandemic has exacerbated these existing challenges. Indonesian Sr. Eustochia Monika Nata and Holy Cross Sr. Michael Mary Nolan, based in Brazil, said during the webinar that the pandemic has clearly increased domestic violence in their respective countries.

"It's worsening day-by-day, and it's happening all over the country," said Nata, a member of the Congregation of the Missionary Sisters of the Servants of the Holy Spirit and an advocate for women who are experiencing domestic violence.

"And having good laws on the books "doesn't mean they are being applied," Nolan said of the situation in Brazil.

Though such accounts of struggle were common during the Commission on the Status of Women events, Sr. Carol De Angelo, director of the Office of Peace, Justice and Integrity of Creation for the Sisters of Charity of New York, said the two weeks of meetings landed on an optimistic spot.

Even though participants were not able to meet in person and network with each other, the wider participation from throughout the world meant "that the sharing was very, very deep."

"I'm taking away a lot of hope and inspiration," De Angelo told GSR.

She also underlined the seriousness of women's status in the world right now because of the pandemic and long-standing inequities.

"Power is not going to be given to us," she said, adding that it is up to women and male allies to work toward gender equality.

One of those allies, U.N. Secretary-General António Guterres, said throughout the meetings that women's equality is an imperative not only for women, but for the whole of humanity and even the planet.

"We cannot go back to the failed manmade policies that have resulted in the fragility we see around us — in health care systems, in social protection, in access to justice, and in the well-being of our planet," he said at a March 16 virtual town hall.

News | COVID-19 has made world worse for women, say participants in UN commission

Nigerian nuns whittle away at country's 10.5 million kids out of school

Election night, before and after, we must build common ground