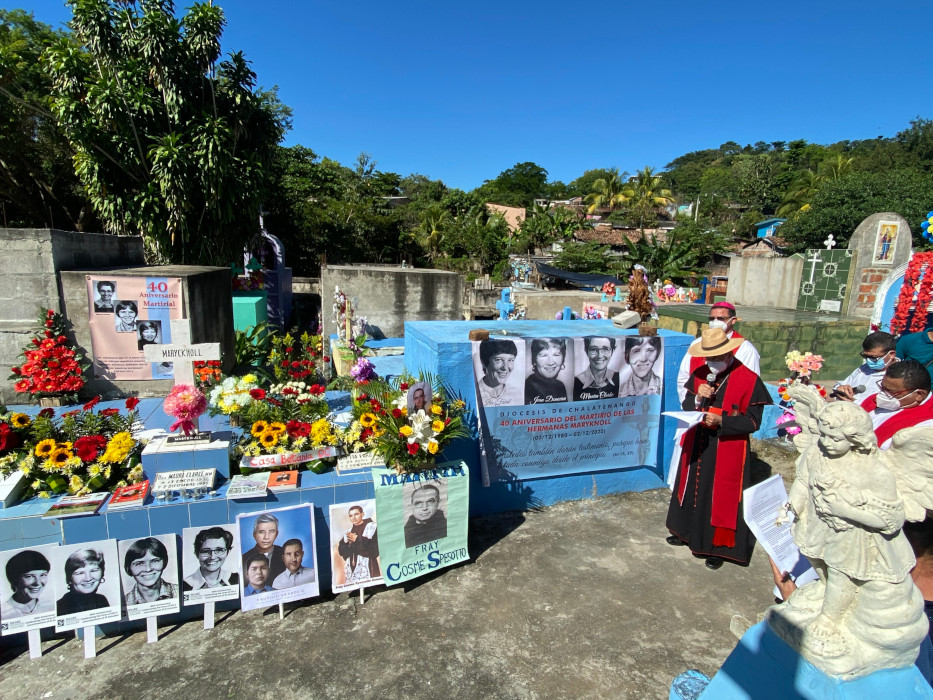 Cardinal Gregorio Rosa Chavez of San Salvador, El Salvador, and Bishop Oswaldo Escobar Aguilar of Chalatenango gather with a group to pray at the tombs of Maryknoll Srs. Ita Ford and Maura Clarke Dec. 2, 2020. Along with Ursuline Sr. Dorothy Kazel and Jean Donovan, a laywoman, the Maryknoll sisters helped children and civilians find refuge but were subsequently raped and assassinated by military in the Central American nation in 1980. (CNS/Rhina Guidos)

Bishop Oswaldo Escobar Aguilar walked, undetected, into the small cemetery. He carried a bouquet of pink crepe flowers for the final resting place of the women mostly known simply as the "hermanas Maryknoll" or Maryknoll sisters.

They lived just a short distance from his hometown when their murders occurred, but he does not remember meeting them.

Though the pandemic has largely spared the rural Diocese of Chalatenango, which he now leads in northern El Salvador, precautions are still in place and have meant scaling down the large celebration he had envisioned for the women.

On his way out of the cemetery, however, a group of pilgrims — carrying photos of Maryknoll Srs. Ita Ford and Maura Clarke, Ursuline Sr. Dorothy Kazel and laywoman Jean Donovan — walked in. When some in the group saw him, they asked him to join them on the eve of the 40th anniversary of what some consider the women's martyrdom.

Chalatenango, he told them, means "valley of sand and water" in the area's indigenous language, "but in the 1980s, it became a valley of blood." And some of the blood spilled was that of the four U.S. Catholic women.

In a Mass of Salvadorans martyrs in Chalatenango's St. John the Baptist Cathedral Dec. 2, Escobar and other prelates remembered the women as their own, along with others who died that fateful year when the country was reaching its boiling point and was about to enter a conflict that would last more than a decade.

"It's also the 40th anniversary of St. Oscar Romero's death, the mass killing at the Sumpul River," the 40th anniversary of the killing of Franciscan Fr. Cosme Spessotto, an Italian missionary killed at gunpoint after speaking out against injustices, the bishop told the women. The Sumpul River was where more than 600 civilians, many of them Catholic, were killed or driven to their deaths by Honduran and Salvadoran government forces. 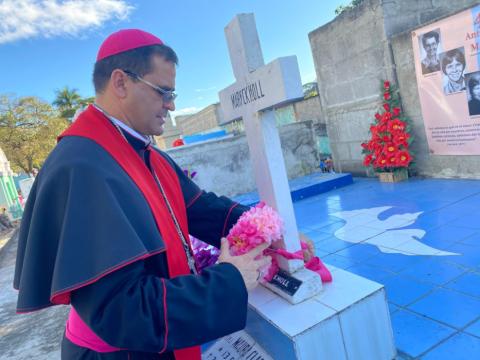 Salvadoran Bishop Oswaldo Escobar Aguilar of Chalatenango, El Salvador, places flowers before praying at the tomb of Maryknoll Srs. Ita Ford and Maura Clarke Dec. 1, 2020, the eve of the 40th anniversary of their assassination in the Central American nation. Along with Ursuline Sr. Dorothy Kazel and laywoman Jean Donovan, the Maryknoll sisters helped children and civilians find refuge but were subsequently raped and assassinated by military. (CNS/Rhina Guidos)

"And well, here we are to continue with this story," the bishop told the group. "We never want to forget these who sowed goodness among us."

Even in a pandemic, he said, it's important to take part of the religious tradition of the Hebrews who never forgot the genealogy of those who offered the best they had. And in Chalatenango, they've never forgotten the women or all the other martyrs of the diocese whose lives, sacrifice and witness they remember each Dec. 2.

On the eve of the anniversary, Rubia Guardado of Communities and Repopulations of Chalatenango reminded the group how the women protected the most vulnerable and paid for it dearly.

"These sisters worked for the human rights of the civilian population," she said. "And they were killed and raped for doing that in that time of war. But for us, they are an example that it's precisely in those moments that we keep fighting for human rights."

The women were known for helping children and civilians, including many from the local diocese, where more than 50 mass killings are believed to have taken place. On Dec. 2, 1980, they took part in the fate that befell Salvadorans — they were raped and assassinated by military in the Central American nation after being abducted on their way home from the airport.

"They are still among us," Guardado said. "Yes, they were brutally assassinated, but we will accompany the Catholic Church [Dec. 2] to keep their memory alive."

Isabel Hernandez of the Salvadoran Human Aid, Research and Education Foundation, known as SHARE, said before the pandemic arrived, more than 150 women religious from the U.S. had signed up to participate in the anniversary and commemorate the "brutal and irrational" assassination of the women.

They were killed, Hernandez said, "like the other martyrs of the country," including St. Romero, who was martyred March 24, 1980, and Jesuit Fr. Rutilio Grande, who is awaiting beatification along with two companions who were killed along with him in 1977.