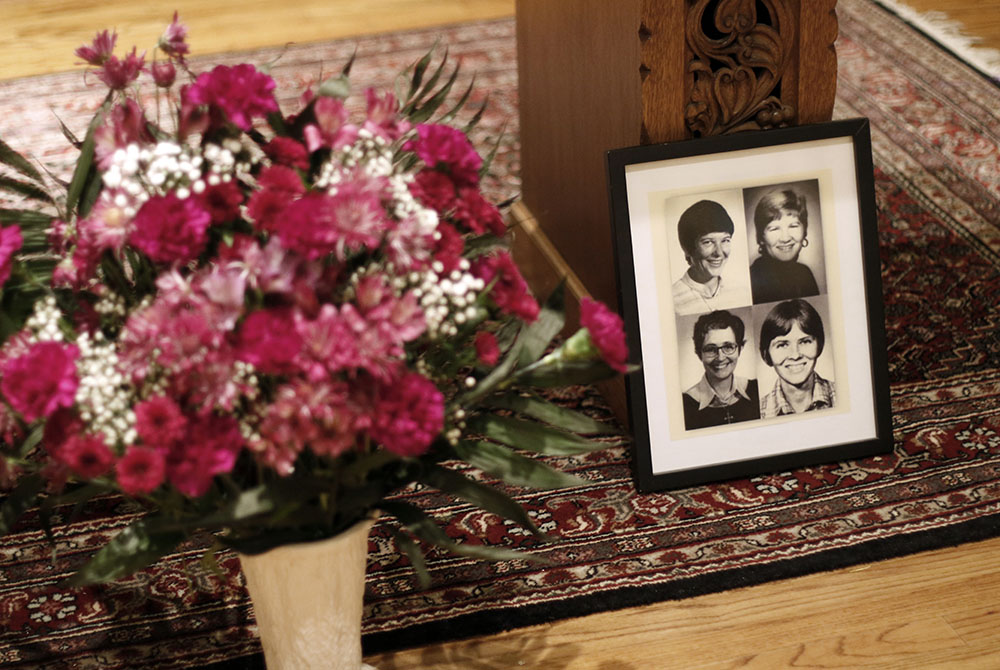 A framed photo of the four churchwomen who were murdered in El Salvador in 1980 is displayed in the sanctuary of Our Lady of the Miraculous Medal Church in Wyandanch, New York. The women present an example of the decision to stay faithful despite the threat of death. Jean Donovan, martyred there, said it was the children whom she couldn't leave. (CNS/Gregory A. Shemitz)

Forty years after their brutal murders on Dec. 2, 1980, the lives and tragic deaths of four American churchwomen murdered in El Salvador will be commemorated in a number of prayer services, vigils and online events.

Many of the commemorations honoring the memory of Ursuline Sr. Dorothy Kazel, Maryknoll Srs. Maura Clarke and Ita Ford, and lay missioner Jean Donovan have had to be moved online due to the global pandemic. The events remain deeply significant to religious communities, particularly in the United States, say those involved in the planning.

"It is so important that we remember our sisters, retell their story and take up their cause," said Sr. Ann Scholz, a member of the School Sisters of Notre Dame and the associate director for social mission of the Leadership Conference of Women Religious, or LCWR, an association of congregational leaders, representing about 80% of the approximately 44,000 women religious in the United States.

"On Dec. 2 women religious and their colleagues will gather people around the country to retell their story and recommit to the work of the Gospel," she said.

LCWR, working in concert with the nongovernmental organization SHARE El Salvador, is inviting "women religious to celebrate the gift of these four women and remember all of those who dedicated their lives to working for justice in Central America and throughout the world," LCWR said in a statement issued to its members. According to the organizers' statement on the SHARE website, "the anniversary is an opportunity to offer [the four women's] story to a new generation hungry for a share of their love, selflessness and courage." The organizers urge congregations "to host a prayer vigil, evening of conversation and story-telling, retreat, or other gathering."

As part of efforts to bolster local events, SHARE has developed a 27-page "toolkit" entitled "Roses in December" offering suggestions, background, biographies and resources for those hoping to mark the commemorations. SHARE hopes there will be at least 40 remembrances in 40 U.S. cities to mark the 40th anniversary.

Pax Christi USA is supporting the LCWR and SHARE efforts by promoting the resources, telling its members that the 40th anniversary "is an opportunity to offer their [the women's] story to a new generation hungry for a share of their love, selflessness and courage."

An LCWR/SHARE delegation visit to El Salvador and neighboring Honduras had been scheduled for Nov. 29-Dec. 7 but was cancelled due to the pandemic. It is being rescheduled for 2021, organizers said.

The Benedictines for Peace will host an online Dec. 2 Holy Hour with access via Facebook or Zoom. The event will be co-sponsored by Sisters of Mercy of the Americas New York Pennsylvania West and Sisters of St. Joseph of Northwestern Pennsylvania.

The Ursuline Sisters of Louisville, Kentucky, have prepared an online prayer service honoring the four women that can be viewed on YouTube.

The Maryknoll Sisters plan a 90-minute public webinar. The 7 p.m. EST event will include prayers, reflections on martyrdom and testimonies by the women's family members, as well as representatives of institutions in the United States and Central America, such as schools, whose work expressly carries on the work of the churchwomen. 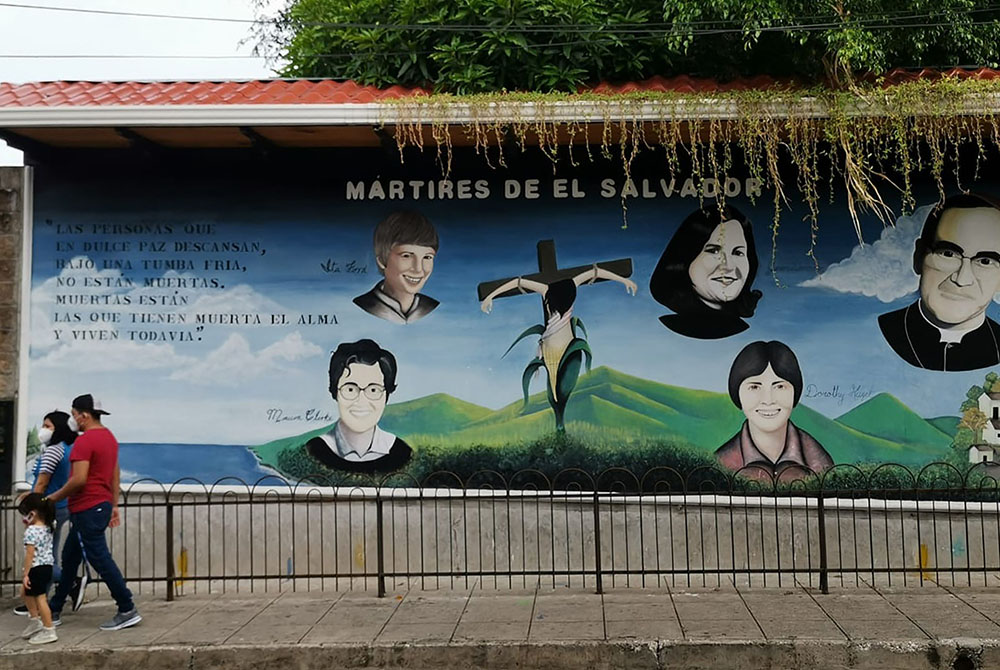 Salvadorans walk past a mural of Salvadoran martyrs Aug. 15, outside Our Lady of Pilar Catholic Church in Zaragoza, El Salvador. The mural includes four U.S. churchwomen slain in El Salvador in 1980; some Catholics in the country consider them part of a long list of Salvadoran saints and martyrs. (CNS/Courtesy of Patricia Lazo)

Making the connections between the past and present is a key part of the commemorations, says Maryknoll Sr. Peg Dillon, who is coordinating the Dec. 2 webinar. "We want to carry on the spirit of the four women," Dillon said in an interview with GSR.

Sr. Martha Owen, a member of the Ursuline Sisters of Cleveland who worked with Kazel in El Salvador from 1974 until Owen left El Salvador in 1979, said her congregation does not plan a public event, though congregational members will gather for a private Mass.

In an interview with GSR, Owen said Kazel's life and example continue to have deep meaning and resonance 40 years after her death, both for the congregation and for Owen personally.

"Knowing and being with Dorothy, and working with St. Romero, were some of the biggest blessings of my life," Owen said, referring to Salvadoran Archbishop Óscar Romero, who was canonized in 2018. She called Kazel, the other churchwomen, Romero and priests killed in El Salvador as "good, good holy people."

The four American churchwomen were murdered nine months after the March 1980 assassination of Romero. They were abducted, raped and then murdered by five Salvadoran National Guardsmen. The brutal killings galvanized religious communities internationally, and in particular focused attention on U.S. support for the Salvadoran military in a decadelong war that eventually left at least 75,000 dead.

By the time the war ended in 1992, El Salvador was known as country where religious martyrs died seeking social justice for the poor. As Scholz noted, the four women "were accompanying refugee families who had fallen victim to the escalating violence and oppression."

The year 1980 proved particularly traumatic with the killings of both Romero and the churchwomen. In all, 18 priests in El Salvador, including Romero, were killed in the civil war. Less than a decade later, in 1989, six Jesuit priests, and a housekeeper and her daughter were assassinated by guardsmen on the campus of University of Central America in San Salvador.

The memories of that tragic era resonate today. "It falls to us to keep the memory of their commitment to the Gospel and to God's people alive. It is up to us to continue their ministry of solidarity; their dedication to the work of justice," said Scholz, who was a young religious in 1980.

"I was all of 29 and teaching high school religion and social studies," she said. "The lives and ministry of those four women provided a wonderful example and challenge for the young women at Notre Dame High School in St. Louis, Missouri," Scholz said. 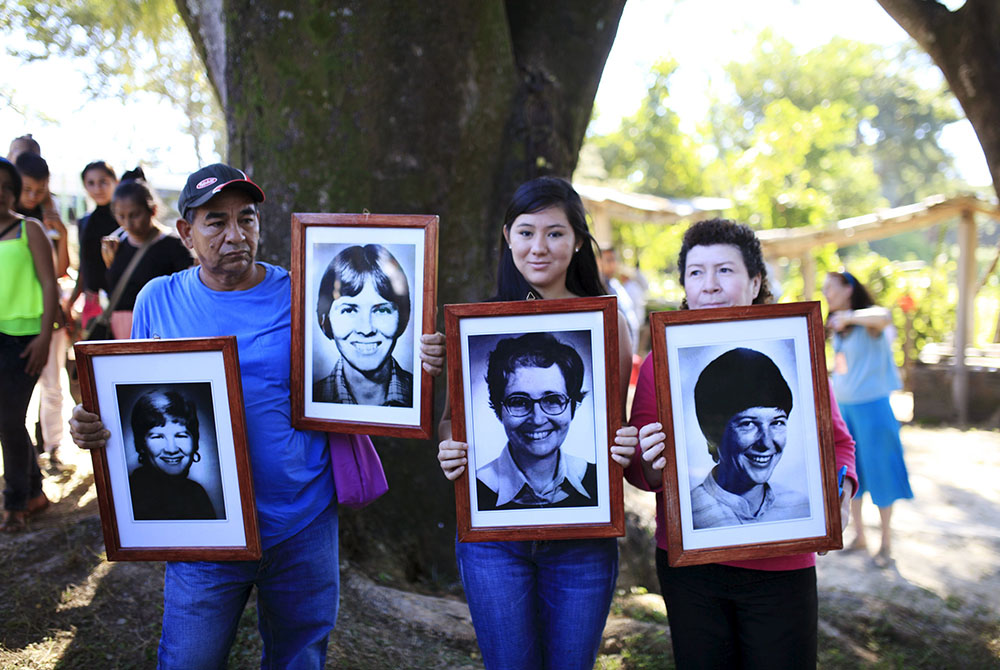 People hold pictures of four American churchwomen during a Dec. 2, 2015, memorial service to commemorate the 35th anniversary of their murder in the town of Santiago Nonualco, El Salvador. Members of Catholic and human rights organizations participated in a memorial at the place where four U.S. churchwomen, lay missioner Jean Donovan, Ursuline Sister Dorothy Kazel, Maryknoll Srs. Maura Clarke and Ita Ford, were killed by members of the Salvadoran National Guard during the civil war. (CNS/Reuters/Jose Cabezas)

"Those of us who remember have a responsibility to tell their story and to invite another generation of women and men to follow their example of selfless love."

"Walking in the footsteps of these courageous women continues to be an experience of transformation and a call to do and be more," said Sr. Joanne Gallagher, a member of the Sisters of St. Joseph of Boston, who serves as the congregation's communications director.

Gallagher, who visited El Salvador in 2015 for the 35th anniversary commemorations, calls Dec. 2 a "holy day" for her and other American sisters and often ponders the question of what would the four women "say to us today? More to the point, what are they saying to us today?" she said in an email to GSR.

"I believe they are saying, 'Tell the story, keep our memory alive not only in the hearts of the Salvadoran people but in the hearts of Catholic sisters. It's not about us personally. It's about addressing the root causes that allowed this our assassinations to happen and be covered up.' "

She added that traveling to El Salvador "and learning from the people who carry on the memory of these women is a powerful experience. But our real work is when we return home. It's about actively seeking opportunities to use our voice in the public square."

Dillon agreed that the four women would not want the commemorations to be about them, but rather "to focus on those they were accompanying" and tackle such endemic problems as poverty, homelessness and racism. "They would want us 'to gift our lives' for something larger than ourselves."

Related: Even in pandemic, many in El Salvador remember slain US Catholic women