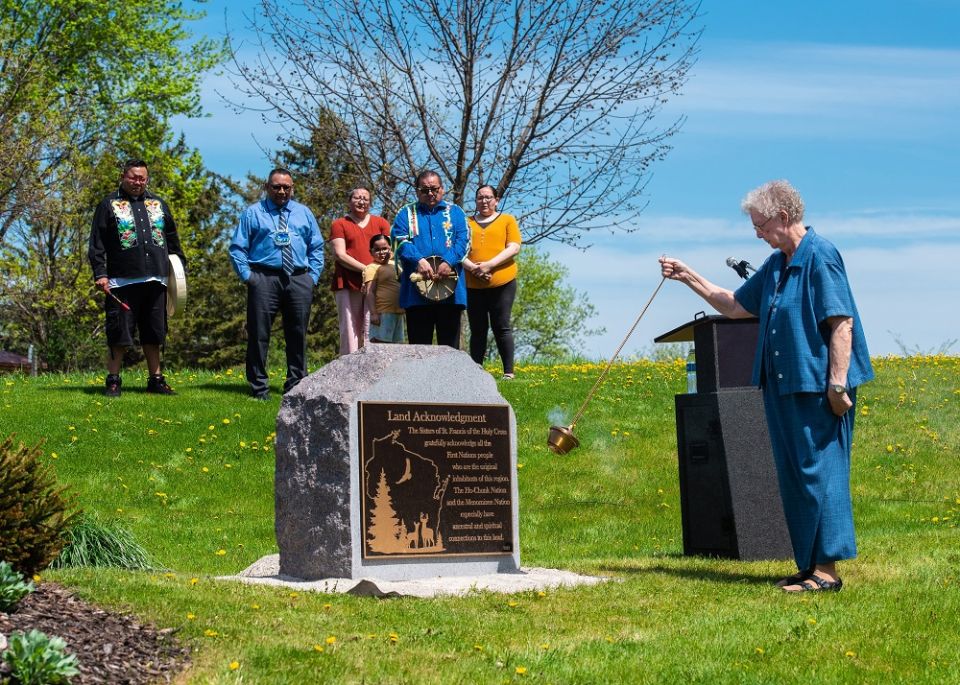 Sr. Ann Rehrauer, community president of the Sisters of St. Francis of the Holy Cross in Green Bay, Wisconsin, uses a censer May 14 to bless a monument with a plaque that acknowledges "the First Nations people who are the original inhabitants of this region." Behind the monument are Nathaniel Longtail Jr., second from left, who is the Ho-Chunk Nation administrative officer, and the Ho-Chunk honor song performers. (CNS/The Compass/Sam Lucero)

Green Bay, Wis. — In what may have been the first such ceremony held by a Catholic religious community in Wisconsin, the Sisters of St. Francis of the Holy Cross hosted a land acknowledgment ceremony on the grounds of St. Francis Convent on May 14.

Land acknowledgment ceremonies are a way for local institutions to recognize the history and contributions of Indigenous communities, the original inhabitants of the land across North America.

In Wisconsin, several Christian denominations, including the Episcopal and Methodist churches, have held similar ceremonies. In 2018, St. Norbert College in De Pere became one of the first Catholic institutions of higher learning in Wisconsin to adopt a policy acknowledging its land as the ancestral home of the Menominee Nation.

In addition to members of the religious community, guests from the Ho-Chunk and Menominee nations attended the ceremony. The event included honor songs led by Ho-Chunk singers and a reading of the creation story in the Book of Genesis by Sr. Nancy Langlois.

The highlight of the ceremony was the dedication and blessing of a 32-inch-by-24-inch bronze plaque mounted to a granite boulder at the driveway entrance of the convent. The sign is inscribed with the following words:

"The Sisters of St. Francis of the Holy Cross gratefully acknowledge all the First Nations people who are the original inhabitants of this region. The Ho-Chunk Nation and the Menominee Nation especially have ancestral and spiritual connections to this land."

"We are deeply grateful that all of you are here today as we recognize and acknowledge the gift of the land on which we now stand, and the First Nations, especially the Ho-Chunk and the Menominee, who dwelt here before us," said Sr. Ann Rehrauer, community president of the Sisters of St. Francis of the Holy Cross, in welcoming remarks. "It's truly fitting that our creator has given us a beautiful day on which to do this celebration."

Before the blessing of the monument, representatives of the Ho-Chunk and Menominee nations addressed the gathering of sisters and guests seated in chairs near the convent entrance.

"I'm very pleased to be here, and I'm thankful and overwhelmed with emotion today for the time [the Franciscan sisters have] taken to acknowledge the land here on behalf of this area," said Nathaniel Longtail Jr., Ho-Chunk Nation administrative officer, who was representing the tribal president, Marlon WhiteEagle.

"Today, we begin by acknowledging our relationships to the land," said Dennis Kenote, a Menominee tribal elder who represented tribal chairman Ron Corn Sr. "Our homelands are a place where the past touches the present and connects our life with people who came before and left a rich tribal heritage."

"We invite you to explore more about our government, our history, our culture and our communities," he said.

The Franciscan sisters said they began researching land acknowledgments after attending presentations in April 2021 led by Region 9 of the Leadership of Conference of Women Religious.

"The presentations helped us understand the history of Indigenous people and the related issues, such as land," Rehrauer said. "Our patron saint, Francis, saw God's hand in all creation, which is why we care about this land. We want to be good stewards so that future generations may use it."

Following the honor song led by Ho-Chunk singers Lawrence Walker Jr. and Dylan Prescott,  Rehrauer led the assembly in a blessing of the plaque. With a censer used to bless the monument, the smoke rising from burning incense represented the assembly's prayers to God. 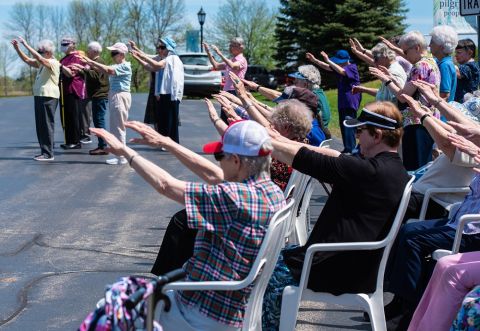 Members of the Sisters of St. Francis of the Holy Cross in Green Bay, Wisconsin, raise their arms May 14 during the blessing of a monument with a plaque that acknowledges "the First Nations people who are the original inhabitants of this region." (CNS/The Compass/Sam Lucero)

After the ceremony concluded, Longtail kneeled in front of the monument, took dirt in his hand and sprinkled it around the monument's base.

"Since the coming of the Europeans onto this continent, a lot of times the Native Americans of the past and even those today sometimes feel like they are not recognized," Longtail told The Compass, newspaper of the Diocese of Green Bay. "Today, we have all of these people here who have come to acknowledge that these were our ancestral homelands, as well as our brothers, the Menominees."

Longtail credited the Franciscan sisters as "good caretakers" of the land.

"I was looking at their signs that say 'We are a pilgrim people,' " he said. "So that is good to know they are people who came here on a pilgrimage to pray and care for the lands and, no doubt, they include us in their prayers throughout their everyday walks. ... So it's really a blessed day."

Kenote, who has participated in other land acknowledgment ceremonies, told The Compass that he is happy that people are now acknowledging and appreciating the contributions of Indigenous people.

"Long ago, in my younger years, this type of thing didn't take place," he said. "It just didn't happen. And we were looked upon as, 'Well, those are the Indians and they live in Keshena on the reservation.' No one knew anything about us other than that. I'm just happy that this is happening. I'm 76 years old now, and I'm glad I get to see these things."

Joan Chittister: how a book and keynote led to friendship