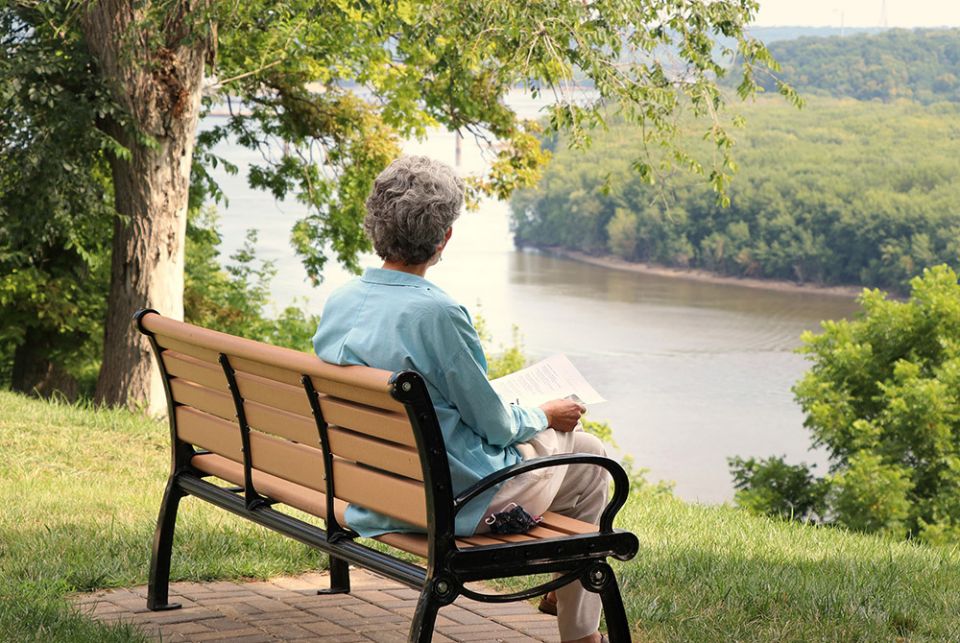 Sr. Lou Anglin of the Sisters of Charity of the Blessed Virgin Mary sits outdoors in quiet reflection in Dubuque, Iowa, as part of her participation in the Leadership Conference of Women Religious' 2020 virtual assembly. (Courtesy of LCWR)

The Leadership Conference of Women Religious' annual assembly will again be virtual, but organizers say it will be less like an online meeting and more like a retreat.

"There will be some time to be quiet, be still, to have some reflection," said Sr. Carol Zinn, a Sister of St. Joseph of Philadelphia and LCWR's executive director. "We're hoping that is nourishing for our members ... that by the time Friday afternoon [Aug. 13, the last day of the assembly] comes, people will leave refreshed, rejuvenated and with a little sense of being in this together."

Related: Q & A with Sr. Jane Herb, new president-elect of the Leadership Conference of Women Religious

"You cannot pretend that it's not virtual. You cannot shoehorn what you would do in person into a virtual format. We tried," she said. "You have to totally reimagine it. You have to ask: What is it that we must do, and how can we be together in a way that is life-giving and not just another Zoom call?"

Assembly sessions are abbreviated, running from 1 to 3 p.m. and 4 to 6 p.m. Eastern time. All sessions will have a contemplative pause, and most will have time for processing in small groups. 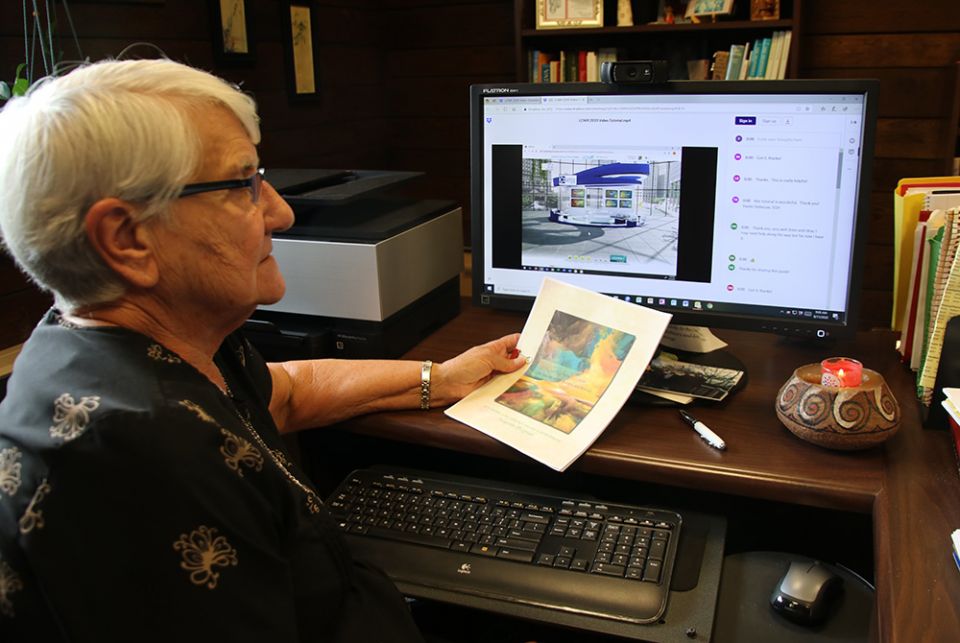 Sr. Mary Norbert Long of the Sisters of Charity of Seton Hill in Greensburg, Pennsylvania, participates remotely in the Leadership Conference of Women Religious' 2020 virtual assembly, which is featured on her computer screen. (Courtesy of LCWR)

Zinn said the small groups could have been a challenge: With more than 1,000 people registered, keeping the groups to nine or fewer requires 130 breakout rooms and 130 facilitators. But enough LCWR members volunteered that it never became a problem.

"The generosity [of those volunteering], even in this time of all this stress and anxiety and uncertainty — there's such a love of religious life and for each other," Zinn said. "It's just such an honor and a privilege to be part of that." 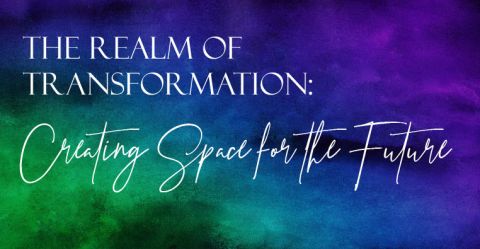 The logo for the 2021 assembly of the Leadership Conference of Women Religious, which this year has the theme "The Realm of Transformation: Creating Space for the Future" (Courtesy of LCWR)

The contemplation and processing will be needed as members work to understand where God is leading religious life in the United States as the number of sisters continues to decline. The Center for Applied Research in the Apostolate at Georgetown University, or CARA, reported 41,357 sisters in 2020, down from 79,814 in 2000 and 126,517 in 1980. A 2016 actuarial study done for the National Religious Retirement Office projects there will be fewer than 30,000 sisters by 2024.

The theme of the assembly is "The Realm of Transformation: Creating Space for the Future," and at least two of the sessions will center on LCWR's ongoing national conversation on the future of religious life.

Those discussions will replace the executive session usually held at the assembly in which business such as the financial report and elections are handled. Zinn said some of the discussions will include not just sisters, but associates, partners in mission and representatives from groups such as Nuns and Nones.

"We're in this paschal mystery experience," Zinn said. "It's a time of letting go, of divesting. Yet there's also such life and joy and hope. Whatever is happening [in religious life], our desire is to create the space for that to happen. ... There's such a deep sense that there's a journey going on, and I'm so glad I'm not alone in it." 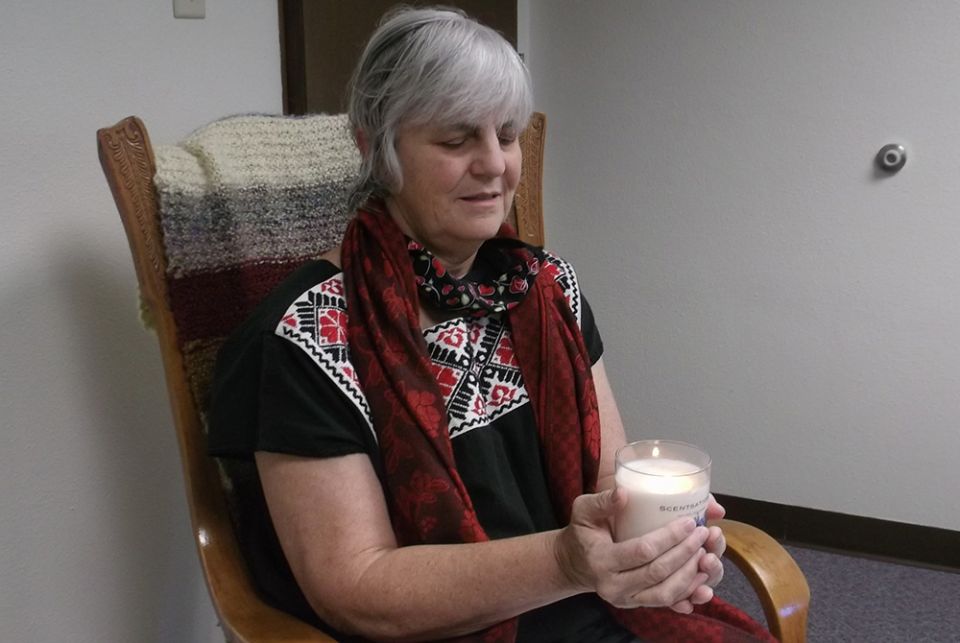 Franciscan Sr. Maureen Leach sits in contemplation with a candle from her location in Dubuque, Iowa, as part of her participation in the 2020 virtual assembly of the Leadership Conference of Women Religious. (Courtesy of LCWR)

Asberry said the small-group discussions will be less about the content of what attendees hear and more about how it is affecting them.

"We designed the questions to be more like the questions asked if you were on a guided retreat," she said. "Things like, 'How is God speaking to you now?' " Other questions will include: "How are you resisting what you heard?" and "What is stirring within you?" 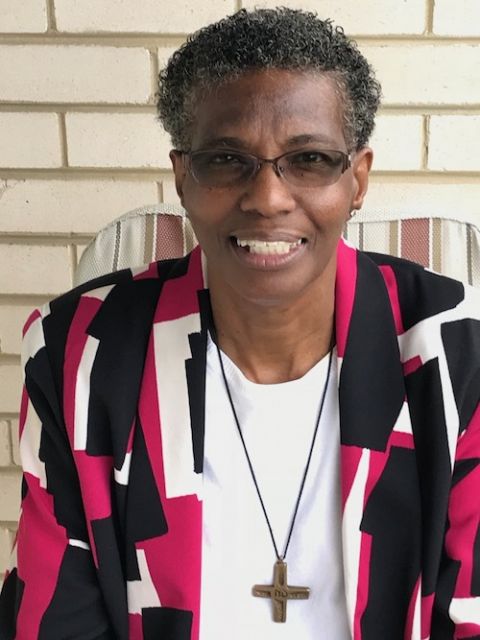 Because of the virtual format, the Outstanding Leadership Award that Sr. Patricia Chappell was to receive in 2020 will be pushed back another year so she can accept it in person. Chappell, a Sister of Notre Dame de Namur, was the executive director of Pax Christi USA for eight years and president of the National Black Sisters' Conference for five years. Now the co-coordinator of her community's anti-racism team, she has long been involved in anti-racism work, helping religious communities confront the systemic racism within their congregations.

But the assembly will see LCWR's first three Lifetime Achievement Awards, which will be presented to St. Joseph Sr. Helen Prejean, Immaculate Heart of Mary Sr. Amata Miller, and Sr. Joyce Meyer of the Sisters of the Presentation of the Blessed Virgin Mary, who is also Global Sisters Report's international liaison. Like Chappell's award, the Lifetime Achievement Awards were to be given last year but instead will be presented during the second session Aug. 13.

Asberry said the retreat-like format is also a response to the stress and trauma that leaders of congregations have experienced in the last 18 months. She said organizers want the assembly to be "a time of coming together, place of healing, of being held by one another."

Zinn said the trauma that sisters have experienced is nothing compared to the trauma of those to whom they minister.

But there was also the stress of keeping sisters, especially older sisters, safe; of changing budgets to avoid layoffs; of the decisions on which community ministries had to close, which could stay open and which new ones were needed. And there was the lack of the community rituals to give comfort.

"There was the absence of common meals, common prayer, common liturgy, all the celebrations of life, of jubilees and funerals," Zinn said.

Because of the 2021 LCWR assembly's format, organizers are encouraging attendees to take the time a real-world retreat would require. Some leadership teams are meeting off-site to attend the assembly, which is encouraged if it can be done safely.

Asberry said participants will not be in the right mindset if they treat the assembly as a four-hour Zoom call each afternoon.

"You can't say, 'I have all morning to do all this other stuff,' " she said. "We're inviting them to really make the place and space for it. Don't crowd the four hours into a busy day."

Ethical quandary looms on eve of US military withdrawal from Afghanistan