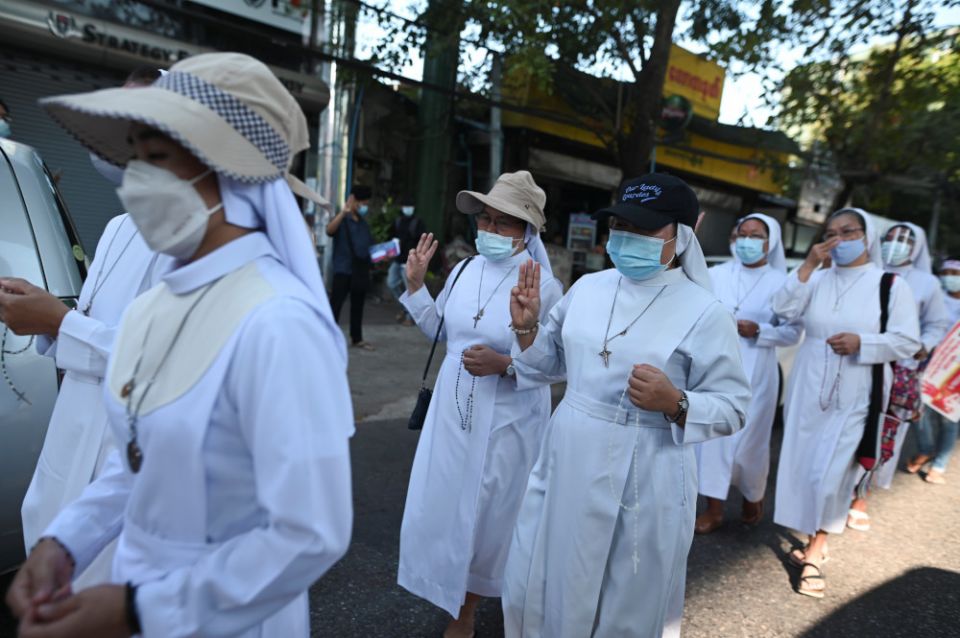 Nuns show the three-finger salute outside the Chinese Embassy in Yangon, Myanmar, Feb. 11, 2021, as they protest against the military coup and demand the release of elected leader Aung San Suu Kyi. (CNS/Reuters)

Ucanews.com reported that hundreds of Catholics, including dozens of nuns, marched on the streets of Yangon Feb. 14 and recited prayers and the rosary.

Nuns from various congregations have shown solidarity with the people of Myanmar by marching on the streets, saying prayers at convents and offering snacks to protesters in Yangon and elsewhere, ucanews.com reported.

In the Christian stronghold of Kachin state, nuns stood at the entrance of a church compound while holding placards that read "No to dictatorship" and "Listen to the voices of people," while protesters swarmed the streets of Myitkyina, the state's capital city, Feb. 14.

Late Feb. 14, security forces opened fire to disperse protesters at a power plant in Myitkyina, according to video footage shared on Facebook. Soldiers had been deployed to power plants in Kachin, sparking a confrontation with protesters. Earlier, armored vehicles were seen in commercial hubs, according to media reports. On Feb. 15, the internet in Myanmar was shut down from 1 a.m. to 9 a.m.

Some 15 embassies, including those of the European Union and Britain, issued a statement late Feb. 15 calling on security forces to refrain from violence against demonstrators and civilians who are protesting the overthrow "of their legitimate government."

The U.N.'s 47-member Human Rights Council has called on Myanmar's military to restore civilian rule and immediately release civilian leader Aung San Suu Kyi. China and Russia disassociated themselves from the consensus and said the coup was Myanmar's internal affair.

The Vatican said it has been following with "great attention and deep concern" the developments in Myanmar, which Pope Francis visited in November 2017.

"In this most delicate moment, the Holy See wishes to assure once again its spiritual closeness, prayer and solidarity with the people of Myanmar," Archbishop Ivan Jurkovic, the Holy See's permanent observer to the U.N. Human Rights Council, said Feb. 12.

"The Holy See also implores that those who hold responsibility in the country will place themselves, and their actions, with sincere willingness at the service of the common good of fundamental human and civil rights, of promoting social justice and national stability, for a harmonious, democratic and peaceful coexistence."

Francis has expressed his solidarity with the people of Myanmar and called for the release of detained leaders, including Suu Kyi.

The impoverished Southeast Asian nation was under military rule for more than five decades, but the democracy experiment with political, economic and social freedoms that began in 2011 was ended by the military coup.