by Dan Stockman
News
Social Justice
This article appears in the Nuns on the Bus feature series. View the full series. 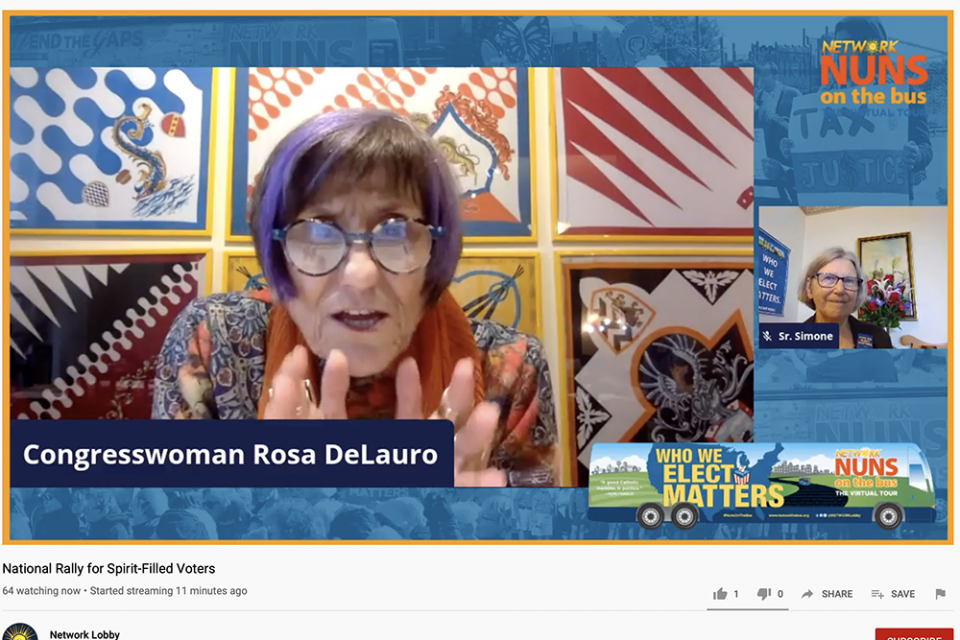 U.S. Rep. Rosa DeLauro, a Democrat from Connecticut, speaks at the Oct. 23 closing rally for the 2020 Nuns on the Bus virtual tour, which ran from Sept. 23 to Oct. 23. At right is Social Service Sr. Simone Campbell, executive director of Network, the Catholic social justice lobby that organizes the bus tour. (GSR screenshot)

The monthlong Nuns on the Bus tour is over, and Social Service Sr. Simone Campbell doesn't even have to unpack — the seventh tour, sponsored by Network, a Catholic social justice lobby, had to take place entirely online because of the coronavirus pandemic.

The tour emphasized that who Americans vote for matters and the importance of being a multi-issue voter, a message highlighted in the closing rally by Erin Gabriel, the director of advocacy for Little Lobbyists and the state chapter leader of Little Lobbyists of Pennsylvania, which lobby for children with complex medical needs.

Related: Catch up with coverage of the 2020 Nuns on the Bus virtual tour

One of those children is Gabriel's daughter, who has autism and several other medical issues and who, without the Affordable Care Act, "would be uninsurable," Gabriel said.

Gabriel said it is "excruciating" that the White House has turned its back on people with any kind of needs.

"The current administration has shown us over and over again that they do not value life. They have repeatedly tried to take health care from millions of Americans and are still trying. They have separated children from their families, and now we're hearing that hundreds of them cannot even be reunited with their parents," she said. "These are our children. We are all brothers and sisters in Christ, and this is being done in our name."

Randi Weingarten, president of the American Federation of Teachers and the wife of a Jewish rabbi, echoed Gabriel's sentiments.

"We must fight for the dignity of all, and particularly those who are most vulnerable. This is what our faiths teach us," Weingarten said. "This is part of why elections matter. We need to make sure health care is a right, not a privilege. ... None of us are dispensable."

"This is part of why elections matter. We need to make sure health care is a right, not a privilege."
—Randi Weingarten

Joe Biden, former vice president and a 2020 presidential candidate, sent a letter to Network to mark the conclusion of the tour, writing: "It is a pleasure, as always, to extend my well-wishes and sincere congratulations to you on another successful tour. While it has looked and felt different than previous tours and rallies, this milestone is no less momentous; your mission to bolster humanity and decency in our nation's politics so that it may elevate those who face the greatest challenges, no less righteous."

Over the course of the virtual tour, there were five rallies, 28 town halls, 25 site visits, and five "dialogues across geographic divides," in which organizers brought together people from rural and urban areas to find their commonalities.

At the closing rally, Campbell said the urban-rural dialogues were especially enlightening.

"We discovered that many of the needs and the joys of urban and rural living are often the same," she said. "And also that the responses to those needs may need to be a bit different." 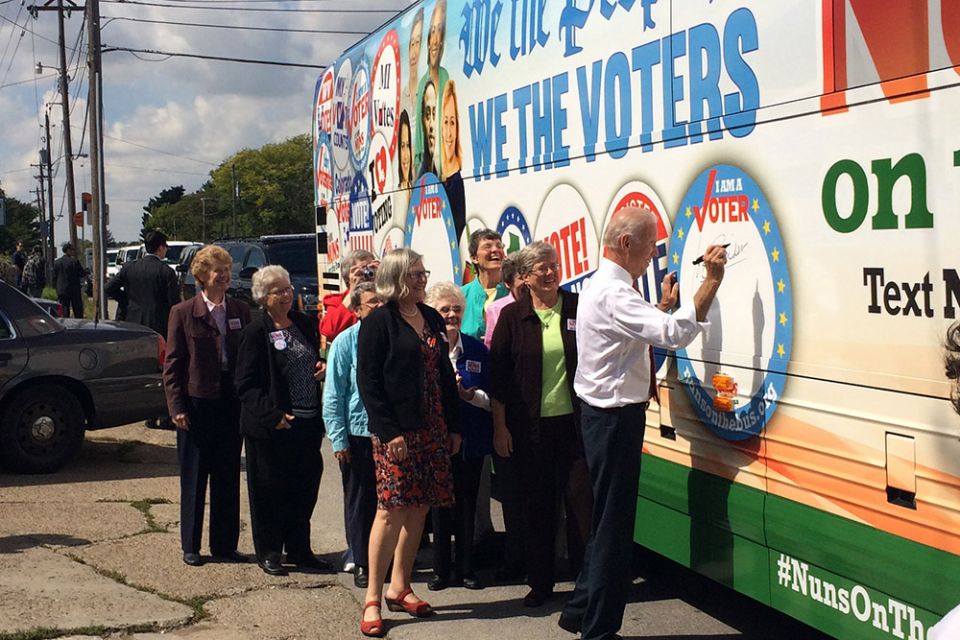 Joe Biden signs his name to the Network Nuns on the Bus official vehicle for the 2014 tour after speaking at the kickoff rally in front of the Iowa State Capitol in September 2014, when Biden was vice president. The nuns on the bus are behind him along with Sr. Simone Campbell, Network's executive director (in red shoes). (Courtesy of Network)

One example is food deserts. Campbell said many are aware of the lack of fresh, nutritious food in urban areas, but she was surprised to learn that is often the case in rural areas, too, because of the emphasis on shipping vast amounts of harvested crops to major distribution centers.

"I thought everybody in the farming community would have enough food," she said. "But that's not always the case."

"Before, the only ones that would see it would be the sisters. But doing it virtually, we had hundreds of people watching the different site visits."
—Social Service Sr. Simone Campbell

In an interview with Global Sisters Report, Campbell said the response to the virtual tour was better than expected, including more than 1,300 people who attended at least one of the town halls, "which is where we do the actual work of talking about how to be a multi-issue voter."

One benefit of touring online was that site visits were open to all, not just nuns on the bus.

"Before, the only ones that would see it would be the sisters," Campbell said. "But doing it virtually, we had hundreds of people watching the different site visits."

One thing they learned, she said, was to trust people's ability to come together. The rural-urban dialogues were not livestreamed because initially, they wondered, "What if it's a train wreck?" However, Campbell said, they turned out wonderfully, "with nary a train wreck in sight."

But even that lesson had an upside: Instead of livestreaming the events, staff recorded them and posted them later, giving organizers time to overcome the technical issues caused by a lack of broadband internet service in rural areas.

Campbell announced Oct. 20 she will step down as head of Network in March 2021, but she is certain the tours will continue physically (when it is safe), virtually or some blend of the two.

"It's not Sr. Simone Campbell on the Bus. It's Nuns on the Bus," she said.

While Network definitely wants to return to in-person tours, she said the organization learned the flexibility and innovation that cyberspace offers.

"Community has a tactile, physical piece, and that's the hard part" of going virtual, Campbell said. "But we learned we could do town halls around the country when we're lobbying on an issue. We could do little 20-minute interviews with members of Congress. It opened up our imagination for what's possible."

She said the tour, which began Sept. 23 with a kickoff event featuring House Speaker Nancy Pelosi and Sen. Cory Booker, brought hundreds of new donors. And while the technology side of the tour was expensive, "when all is said and done, we did way more than broke even."

And, thanks to the internet, even if you missed the tour, it's not too late to catch up: The website with recordings of all the events will be accessible through Election Day.

Nigerian youth inspire each other