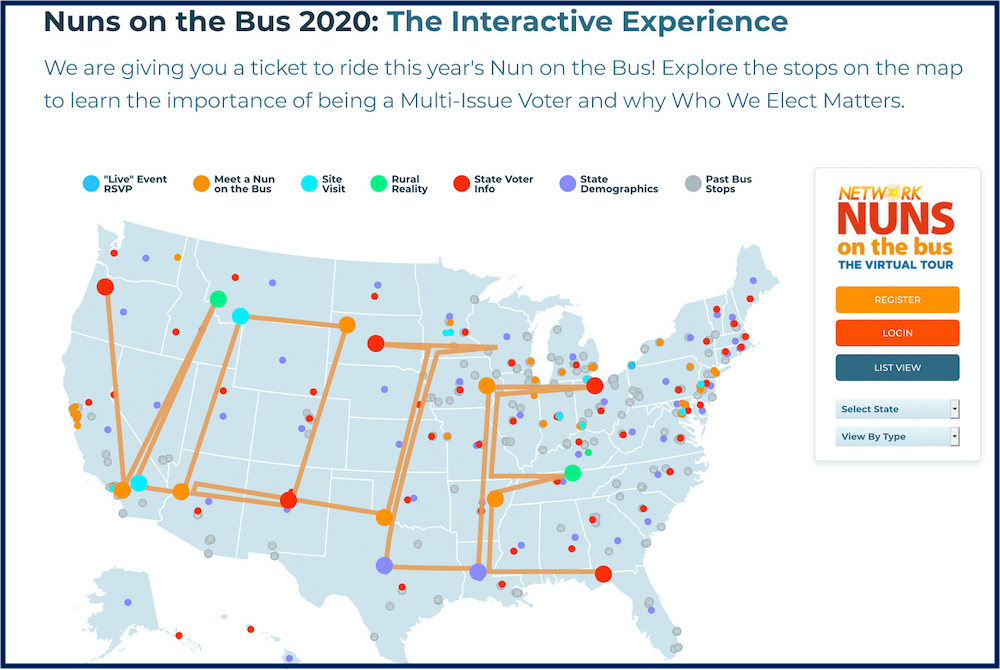 Detail of Network website graphic, showing this year's virtual Nuns on the Bus tour. Participants will be able to choose their own stops as they build a route across the country. (Courtesy of Network)

The Nuns on the Bus are getting a sort of staycation this year, running a bus tour of the country that will take place entirely online.

Network, a Catholic social justice lobby, announced that the tour, which runs from Sept. 23 to Oct. 23, will be entirely in cyberspace because of the risk of transmitting the coronavirus.

"We may be crazy, but I'm excited about it," said Social Service Sr. Simone Campbell, executive director of Network. "It's a different thing, but I'm so glad we figured out a way to do it."

Nuns on the Bus began in 2012 as a cross-country bus tour to raise awareness of income inequality and the working poor, barnstorming through political battleground states. This will be the seventh tour.

The Sept. 17 announcement was timed to coincide with the release of Campbell's new book, Hunger for Hope: Prophetic Communities, Contemplation, and the Common Good. Word of the tour had been circulating for weeks as Network reached out to donors and organized volunteers.

Campbell said the 2020 Nuns on the Bus tour will be focused on helping people become multi-issue voters.

"We need to break out of the binary choice of just pro-life and pro-choice," she said. "When you look at the church's teaching, it is always linked with all of the other life issues, like care for the poor and the marginalized, care for the Earth. It's only when you get away from the teaching, when you get to the politicians, that it's a single issue. [Abortion] is a key issue, but it's not the only issue."

While there are certainly drawbacks to not boarding an actual bus and meeting people across the country, Campbell said, there are also benefits to having an online version: Sisters can participate without committing to a week of bus travel and can pick which events best fit their schedules. And since it is virtual, nuns are not the only people who can get on the bus.

"Everybody can be on the bus this time," she said. "That's the cool part."

The online experience was inspired by the board game "Ticket to Ride," where players create rail lines across the nation. Participants in the Nuns on the Bus tour start with a monochrome bus and add a color with each stop. It takes 30 stops to complete the "tour," which includes online rallies, town halls and site visits. Live events will be recorded and become stops on the tour.

"The site visits are always my favorites," Campbell said. "We learn what's happening, what the needs are, and how the needs have changed over the last four years. With the pandemic, there's been a dramatic, horrible increase in these needs with no funding."

The town halls will be Zoom meetings aimed at building community, with smaller breakout portions led by various nuns on the bus.

Campbell said building community is another reason to host a tour, despite the technical challenges it presents: Much of the political and social divides in the United States fall along geographic lines between urban and rural voters. 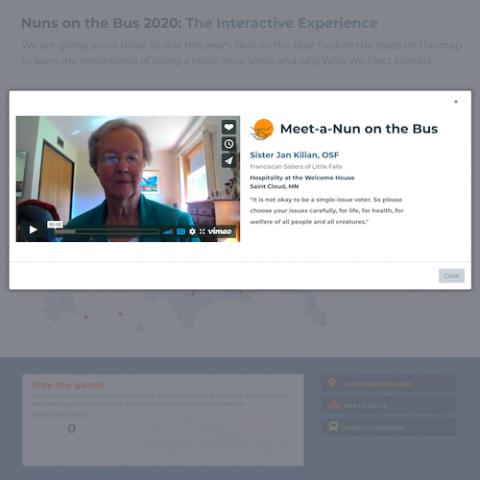 Shot from Network's 2020 virtual Nuns on the Bus tour. Participants can view prerecorded interviews with women religious on the virtual bus, discussing the importance of multi-issue voting. (Courtesy of Network)

Last year, Network held 17 "rural roundtables" in 16 states and found that the needs, such as transportation and housing, in urban, suburban and rural areas are largely the same but manifested differently. Helping people see they have similar needs can help bridge those divides, she said.

"If we believe in democracy, we need everybody's voice in the conversation," Campbell said.

Campbell said while there are no costs to rent a bus or pay hotels this time, there was the substantial cost of developing the online experience, which was paid for by a donor who had never heard of Network but loves the Nuns on the Bus and is concerned about the same issues.

"It's the Holy Spirit that takes care of us," Campbell said.

View of Network's virtual Nuns on the Bus tour, showing how participants can choose their own stops and fill in the picture of the bus. (Courtesy of Network)

This story appears in the Nuns on the Bus feature series. View the full series.