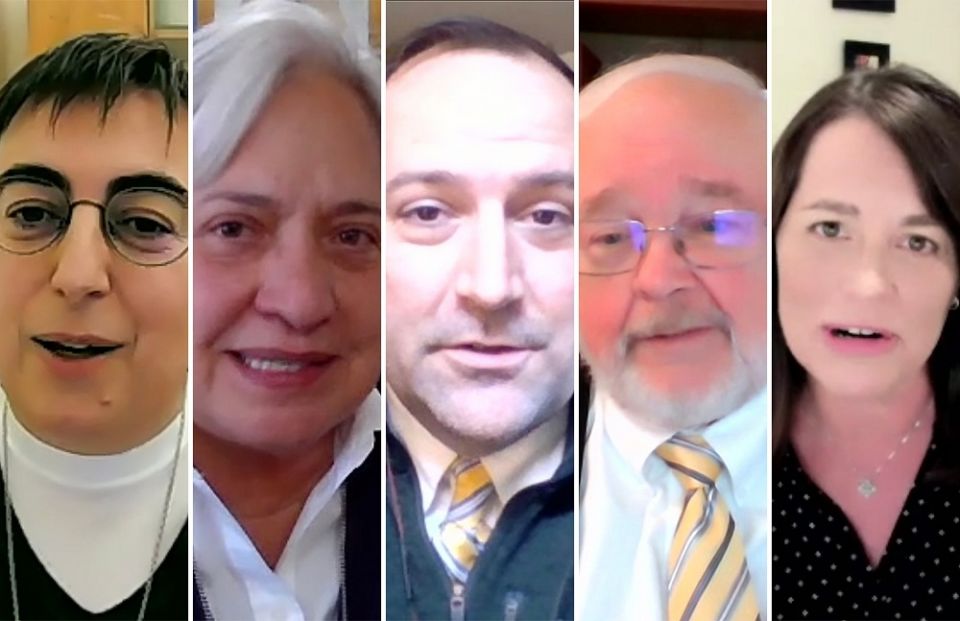 Washington — Not long after Pope Francis was elevated to the papacy in 2013, someone coined the term "Francis Factor" in an effort to identify those qualities he brought to the chair of Peter that distinguished him from his recent predecessors.

Now, nine years later, it may be the simple act of listening that best characterizes Pope Francis' ministry more than anything else, according to panelists at a March 1 forum, "The Francis Factor at Nine Years: Synodality and Solidarity, Reform and Resistance," sponsored by Georgetown University's Initiative on Catholic Social Thought and Public Life.

"He understands what it means to listen. By his example, he encourages all of us to listen, to listen with an open heart. Listening to one another without prejudice and in listening to our common home is an essential pillar in building a world of peace, care, and love," said Sr. Alessandra Smerilli, a member of the Daughters of Mary Help of Christians and interim secretary of the Vatican Dicastery for Promoting Integral Human Development.

"When we listen, and then enter into a dialogue, it enables us to see different perspectives and build on human development, integral view of our world. It is through dialogue and listening that we come to understand the complexities of the issues facing humanity, from the perspectives of those who suffer the most. We see in Jesus, becoming one of us in order to heal, to save, to express the love of God," Smerilli said.

"When we listen with an open mind and open heart," she continued, "we connect the wisdom of others and the different contribution that others can offer to implementing solutions. This is a message that resonates across the church and also beyond the church."

She added, "It's through listening, acknowledging suffering but also opportunities and potential for change that we can find hope. In having hope, recognizing in each other, is what will motivate us to take the first step towards integral and collaborative actions. So in a word, he is teaching us how to listen and we are trying to do this."

Stephen Wright, director of the Catholic Project at the Catholic University of America in Washington, said the pope wants the faithful to proclaim Christ in all they do.

"We can build up the church. But he said we can walk as much as we want, we can build many things but if we don't proclaim Christ, then we are proclaiming a demonic worldliness," he said.

"It was that stark," Wright added. "All of our listening, all of our accompaniment leads to proclaiming the truth about Jesus Christ who saves us and saves the world."

Kim Daniels, co-director of the Initiative on Catholic Social Thought and Public Life, spoke of how the 2023 synod on synodality fits in with Pope Francis' penchant for listening.

"Here you have the world's oldest institution widely seen as stuck in the past, beset with problems," she said, "and it's embarking on something new and unprecedented, this global listing process open to everyone with the goal of living out our mission set most of all on humble service to whom Pope Francis calls those lying wounded on the roadside."

"This is a call to each of us, especially laypeople," she said. "It's calling us to greater participation and for the purpose of living out our mission of loving God and our members."

Daniels added, "Right now listening sessions are going on in parishes, social service ministries, universities, other Catholic groups around the world," but for Catholics who don't feel connected to these institutions, "there are other ways to get your input front and center in this listening process."

"A lot of the input and results are just bringing people from different backgrounds together," she said, "listening to each other, building trust and community and friendship, praying together all of this to the good."

Sr. Norma Pimentel, a member of the Missionaries of Jesus, who is executive director of Catholic Charities of the Rio Grande Valley in the Diocese of Brownsville, Texas, said Pope Francis is "definitely that presence that helps us to recognize that we must let go of everything that stops us from reaching out and being present to the other."

She made a case in point: "I just hear over and over from so many people texting and saying, 'What are we doing about what's happening in Ukraine?' But what happens in Ukraine is also happening here at our border. It has been happening here on the border with the U.S. and Mexico, with so many families coming daily to just ask for help, for safety."

John Carr, the moderator of the forum and the Georgetown initiative's other co-director, said, "I was reminded by one of my friends from Louisiana that this is Mardi Gras today, but it doesn't feel like Mardi Gras. It feels like Ash Wednesday, a long, long Ash Wednesday."

But Carr still has his memories of March 13, 2013, when Pope Francis made his first appearance as pope.

"I'll never forget he asked us to pray for him before he blessed us. And we saw his simple ways, where he lived, what he wore, who he spent his time with, the car he rode in," Carr said.

And even though doctors sidelined the pope from participating in Ash Wednesday services this year because of ongoing knee problems, Carr said, "he stood at that window on Sunday and said, 'Those who wage war forget humanity. Put down your weapons. God is with the peacemakers.'"

Pimentel said it does the church's members good to "focus on the things that bring us together."

"I think that's what Francis is doing, helping us to be one church, one people, one world that is united, that cares for one another," she said. "When we focus on that, we can look at the things that brings us together and be able to listen, like Alessandra was saying. We must listen to each other so that we can walk together."

News | Panel: Nine years into papacy, listening is an important part of the 'Francis Factor'

US churchwomen killed in El Salvador are 'martyrs,' cardinal says