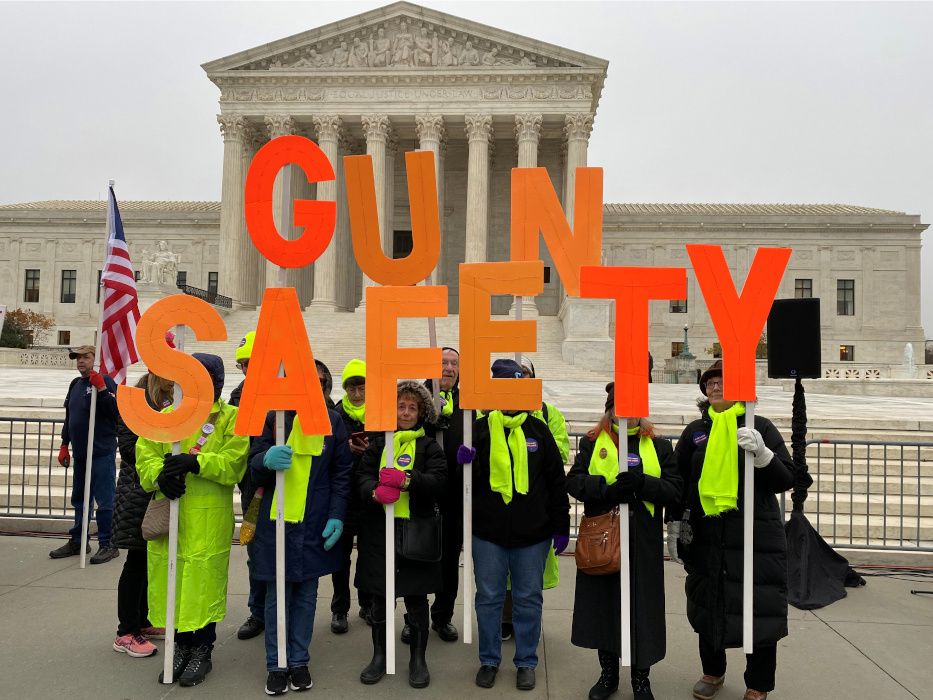 Supporters of gun control laws rally in front of the U.S. Supreme Court Dec. 2, 2019. Shareholder advocates who have tackled issues such as gun control fear that proposals being considered by the Securities and Exchange Commission could limit their rights in influencing corporate accountability. (CNS/Reuters/Andrew Chung)

Washington — Proposals from the Securities and Exchange Commission would change how small shareholders of corporate stock, such as religious congregations, advocate for human dignity and a safer planet.

In response, Sr. Nora Nash, a longtime participant in the shareholder advocacy field, is part of a broad coalition of faith-based and other investors who are lining up to push the SEC to modify if not rollback the proposed steps they say would restrict their voice in seeking corporate accountability.

"I don't think it will be a possibility for many institutions to be able to participate" at the same level of shareholder advocacy if the amendments to existing rules are implemented, said Nash, director of corporate social responsibility for her order, the Sisters of St. Francis of Philadelphia.

"It's a blow against shareholder democracy," agreed Josh Zinner, executive director of the Interfaith Center on Corporate Responsibility. He said the rules would give more power to corporate CEOs to the detriment of shareholders.

The amendments would set higher levels of stock ownership for longer periods of time by shareholders wishing to submit resolutions on issues such as human rights in supply chains, environmental protection and corporate governance reforms.

The proposals also raise the threshold of needed support from shareholders before a resolution can be resubmitted for a vote during a corporate annual meeting.

"What they're trying to do is make it harder for smaller shareholders to file resolutions. We would argue it should not be based upon which kind of shareholder or size of shareholder should be able to file," said Mary Beth Gallagher, executive director of Investor Advocates for Social Justice in Montclair, New Jersey.

"We'll have to see what happens in terms of how it plays out. But it seems like bigger investors will matter more," she told Catholic News Service.

The SEC accepted the proposed amendments in a 3-2 vote Nov. 5.

A 60-day comment period opened Dec. 4 with publication of the amendments in the Federal Register.

SEC Chairman Jay Clayton said after the vote that the amendments would "improve the proxy process" and would allow "constructive engagement by long-term shareholders in a manner that would benefit all shareholders and our public capital markets."

The two commissioners who voted against the amendments, Robert Jackson Jr. and Allison Herren Lee, have publicly voiced their concern that shareholder rights would be limited if the new rules are put in place.

Clayton is set to appear before the Senate Banking Committee Dec. 10. Observers expect the proposals will be among the issues discussed.

Susan Makos, vice president of social responsibility at Cincinnati-based Mercy Investment Services Inc., said the SEC was "trying to fix a system that isn't broke if you look at the data."

Statistics from the Forum for Sustainable and Responsible Investment show that, on average, 13% of Russell 3000 companies — the 3,000 largest publicly held companies incorporated in America  —  received a shareholder resolution in any one year from 2004 to 2017, meaning that a company in the index can expect to receive a proposal every 7.7 years.

While Mercy Investment Services, under the Sisters of Mercy, prefers face-to-face engagement as much as possible to change corporate behavior, Makos said she considers the step of submitting resolutions to address key social concerns "a very important tool that we use."

The amendments approved by the SEC had long been sought by corporate trade associations including the Business Roundtable. The associations had urged the SEC to streamline the process for filing shareholder resolutions to reduce the number of submittals and resubmittals.

Specifically, the SEC plan would require shareholders to own $2,000 in company stock for a minimum of three years instead of just one year before they can submit a resolution. Shareholders who own $15,000 in stock for two years or $25,000 for one year can file resolutions under the amendments. In addition, investors would no longer be able to aggregate shares to meet the new thresholds.

Another amendment would raise the thresholds of support needed for resubmitting resolutions to 5% the first year, 15% the second and 25% the third before another vote could be sought. Current thresholds call for support of 3%, 6% and 10%, respectively.

Oblate Father Seamus Finn, who chairs the ICCR board, expressed less concern about the SEC proposals, saying that attempts over the years to limit shareholder rights have been moderated or scrapped altogether.

He is keeping a watchful eye on the process, however.

"I suspect ... the SEC comes down somewhere in the middle," Finn said.

"I'm concerned about the trend, but I think we have the horsepower to slow it down," he added. "I'm confident if it were to go through, we'll find a way to meet with these companies."

Meanwhile, the many socially responsible investment coalitions were preparing to submit their concerns as the comment period opened. Gallagher said lining up respondents to the amendments is underway.

"For these rules, we're concerned because we believe we're doing work that we believe is important. We're raising issues that other investors aren't raising," she said.

"Our constituency does this (advocacy) as part of their social justice ministry. This isn't about maximizing shareholder value."

Read this next: Q & A with Sr. Susan Mika, pushing McDonald's to remove antibiotics from its beef

Q & A with Sr. Eileen Reilly, advocating against the death penalty in the US